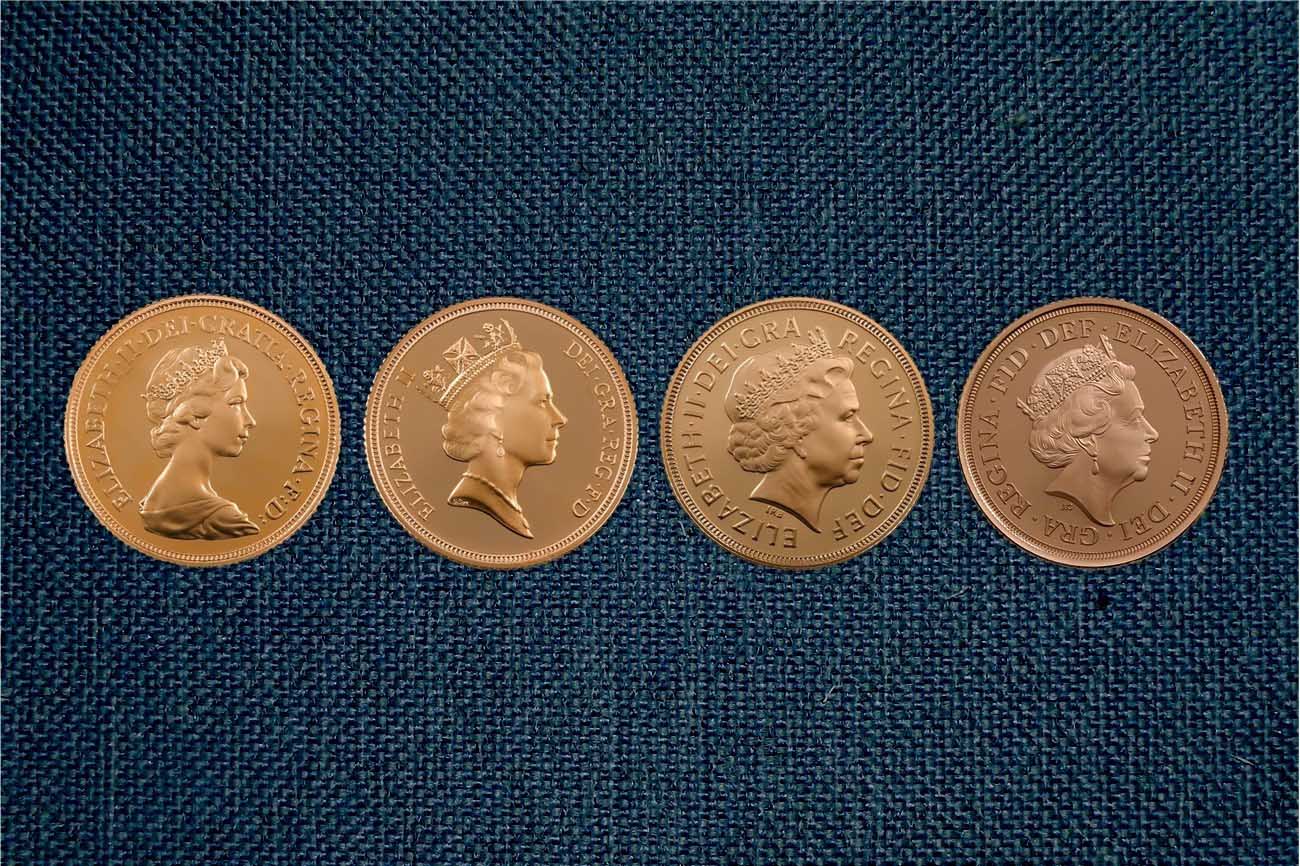 It's no secret that we love Sovereigns at The Britannia Coin Company and proof Sovereigns most of all. These finely stuck gold coins have been consistently available to collectors for less than 50 years and we're pleased to stock an extensive range in their original Royal Mint boxes.

But what years are rare? Which ones have different designs? And what are the different portraits of Her Majesty the Queen used on these coins?

Sovereigns appeal to investors, looking to acquire coins with a known and consistent amount of gold. Mintage figures, errors, variants, grade and the length of the series provide numismatic interest.

Sovereigns fell out of circulation in Britain with the start of the First World War but they continued to be struck at colonial mints and were the subject of increasing demand, particularly in the Middle East. To meet this, The Royal Mint began striking Sovereigns as bullion coins in 1957 with a brief pause during decimalisation. As part of a move towards collectible coinage, starting in the 1970s, the Mint began to offer Sovereigns in a fine proof finish from 1979 onwards.

What are proof coins? Intended for collectors, proof coins display more detail than their bullion counterparts and the coins you find in your change. They are struck multiple times with specially prepared dies with each coin carefully examined for imperfections. Proof coins are the best way to appreciate coinage art and they are only offered in limited numbers.

Four portraits have been used on proof Sovereigns since 1979. Firstly, Arnold Machins (in use on British coinage from 1968 to 1984), then Raphael Makloufs (1985-1997), followed by Ian Rank-Broadleys (1998-1997) and Jody Clarks which is currently in use (2015-). The progression of right-facing effigies shows Elizabeth II ageing gracefully across five decades. Sovereigns were minted with the first definitive portrait of the Queen - the work of Mary Gillick - but were not commercially available in a proof format. 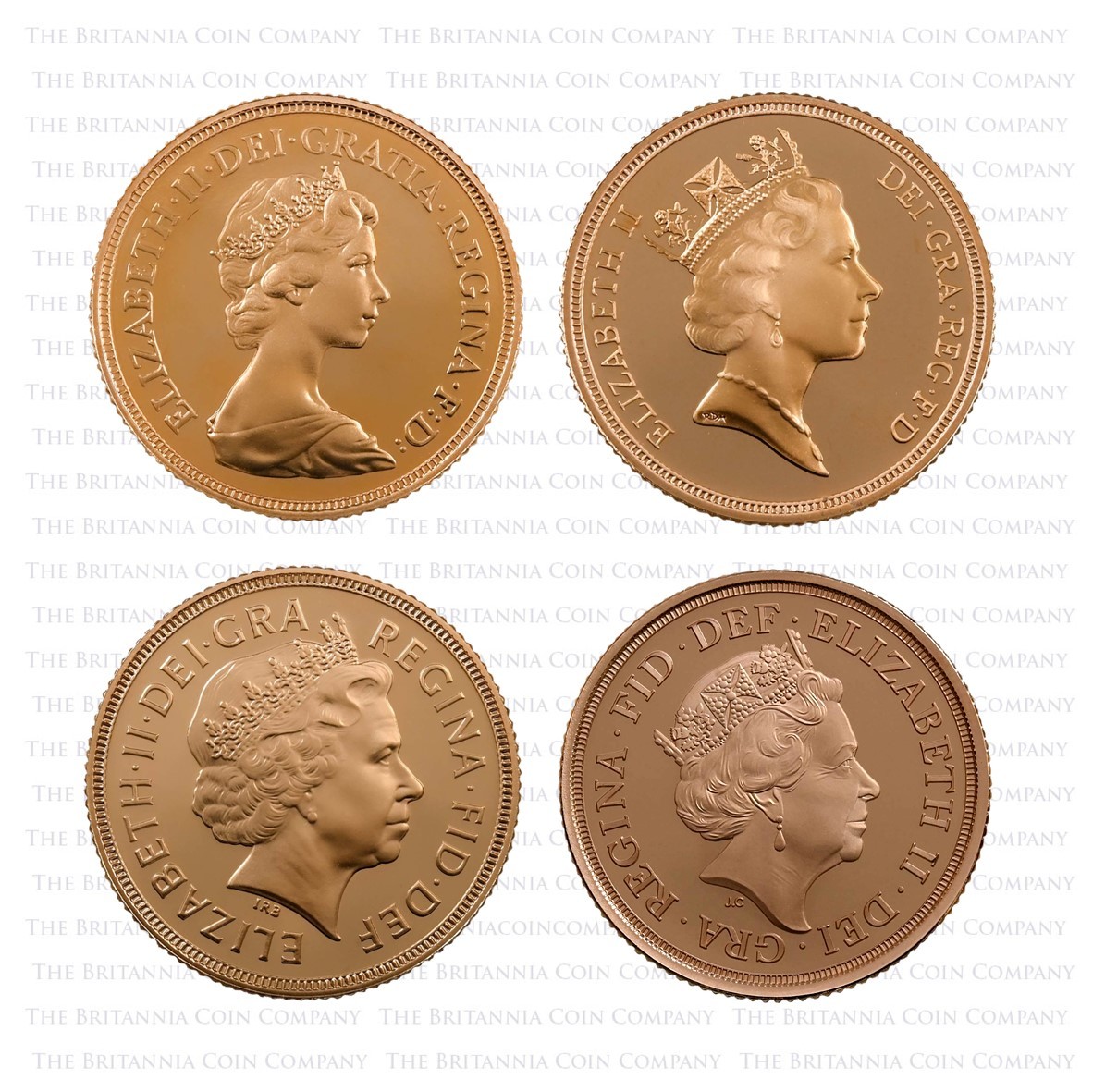 Clockwise from top left: the four royal portraits - by Machin, Maklouf, Rank-Broadley and Clark - that have featured on the obverse of proof Sovereigns since 1979.

Most modern proof Sovereigns have a reverse that shows Saint George, mounted on a rearing horse, in the act of slaying a dragon. This is an old design, intrinsically associated with these coins. It's the work of an Italian designer named Benedetto Pistrucci and was crafted for the first modern Sovereigns, issued in 1817. That's not to say that alternate reverses have not been used on decimal Sovereigns but the standard is England's patron saint. 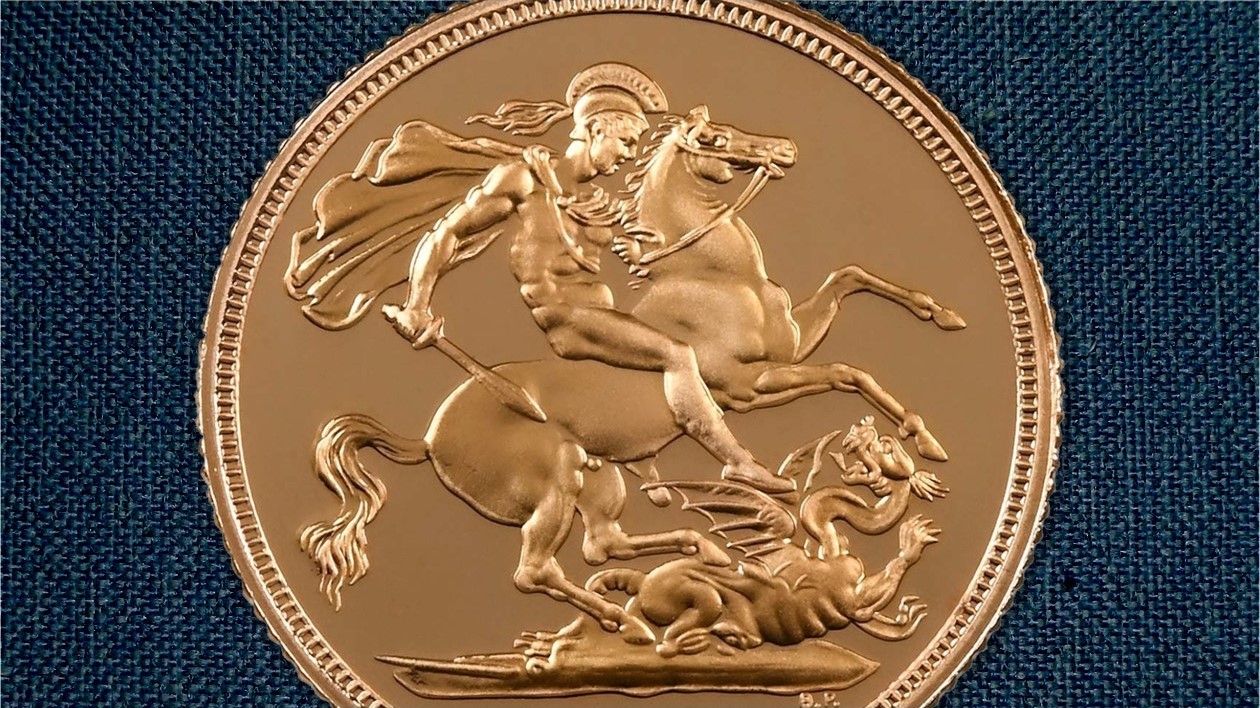 Benedetto Pistrucci's initials appear beneath the dragon in his Saint George design, used for the majority of modern Sovereigns.

Historically, Sovereigns were minted at world branch mints, as well as the London mint at Tower Hill. Significant numbers of Victorian and Edwardian Sovereigns were struck in Australia, South Africa and Canada, circulating through the British Empire. Todays bullion and proof Sovereigns are minted almost exclusively in the UK, specifically at Llantrisant, the current home of The Royal Mint. The last coin struck at the Tower mint was a 1975 bullion Sovereign, modern proof Sovereigns have always been struck in Wales.

Between 1983 and 1997 gold Sovereigns were only struck with a proof finish. You might find Sovereigns with these dates without their capsule and box but they are not bullion coins per se.

A note on figures: We've mostly taken our mintage numbers from those provided in the latest edition of Spink’s Coins of England and the United Kingdom Decimal Issues. Their figures - as far as possible - do not include coins in sets which are listed separately and discussed below. The tables below are for individually boxed proof coins, excepting 1983.

Arnold Machin's is the first portrait to be used on commercially available proof Sovereigns but the second portrait featured on Her Majesty's UK coinage overall.

The number for 1983 includes coins issued in the three coin Sovereign set offered in this year for which no issued figures are available. This likely reduces the the number of individually issued coins by several thousand.

Raphael Maklouf's idealised third effigy was introduced in 1985 and used through to 1997.

Mintage figures dropped significantly in this period and this, together with the fact that no bullion Sovereigns were struck through most of the 80s and 90s has meant that coins with the Maklouf portrait remain in high demand.

1989 marked the 500th anniversary of the first Tudor Sovereigns. To celebrate, special designs were authorised for the obverse and reverse of Sovereigns issued in that year. These were created by British artist Bernard Sindall and inspired by historic coinage. 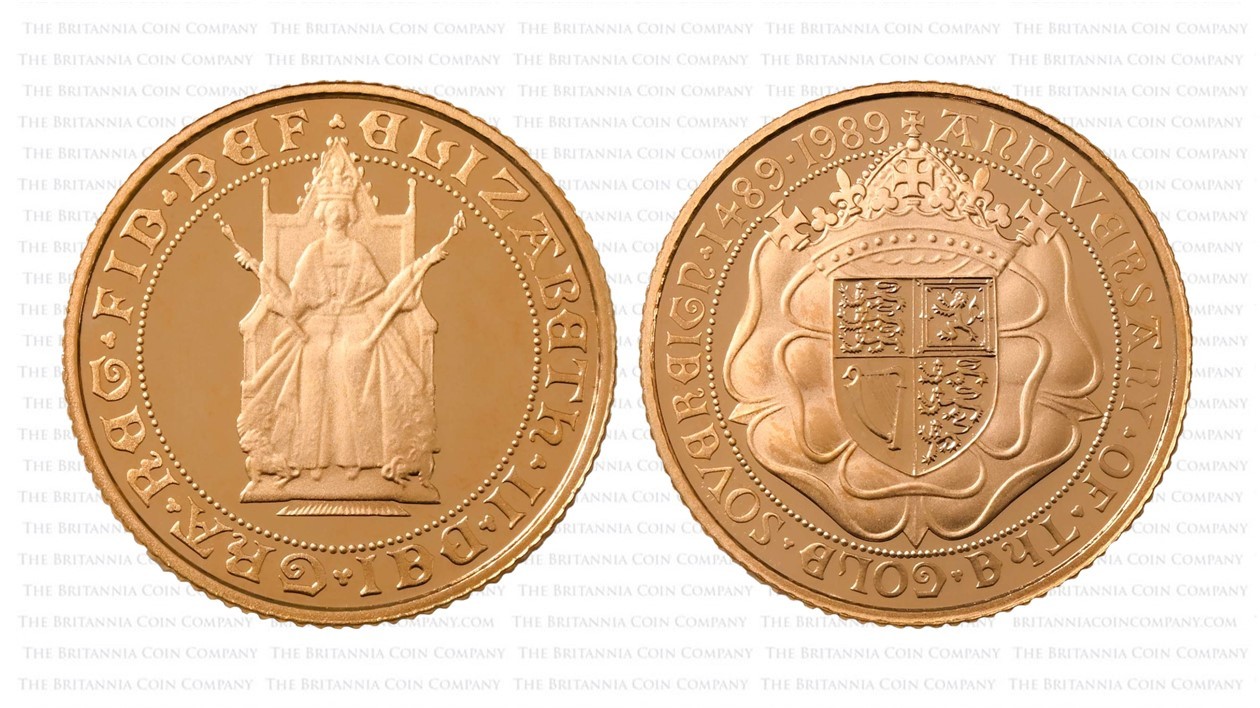 Obverse and reverse of the 1989 gold proof Sovereign, designed by Bernard Sindall for the anniversary year.

2002 proof Sovereigns (and their bullion counterparts) displayed a one-off reverse design, celebrating Elizabeth II’s Golden Jubilee and inspired by Sovereigns issued during the reign of Queen Victoria. This was crafted by heraldic artist Timothy Noad. He also designed a a unique reverse for 2005 proof Sovereigns which reworks the St George motif.

Another new Saint George appeared on the reverse of 2012 proof Sovereigns, this time created by the sculptor Paul Day.

The range of variations used in the design of proof Sovereigns since Jody Clarks portrait came into use has been extensive.

A distinct variant portrait by James Butler was used in 2016 and a special garter motif was added in 2017 for the 200th anniversary of the first modern Sovereigns. Proof Sovereigns in this period also feature privy marks, used to mark anniversaries in 2017, 2018, 2020 and 2021. The reverse of 2022 Sovereigns featured a new heraldic design.

Clark's fifth definitive portrait is still in use on British coinage so we'll be updating this table as new Sovereigns are released and their mintage data becomes available.

Currently we only have data from The Royal Mint's website and certificates for 2022 proof Sovereigns. This might be a little different to the numbers eventually published by Spink.

Issue limits v mintage numbers: If you look at the certificate enclosed with your proof Sovereign you might find a higher figure than is quoted here. This may be the issue limit: the maximum amount of coins to be produced as part of a particular release, based on anticipated demand. The actual number of coins produced is often a bit lower and we call that the mintage number.

This pushes the numbers of proof 'full' Sovereigns issued each year beyond the numbers provided above. We - like other coin dealers and publications - count by how the coin is presented, providing different numbers depending on whether it is presented independently or in a set. 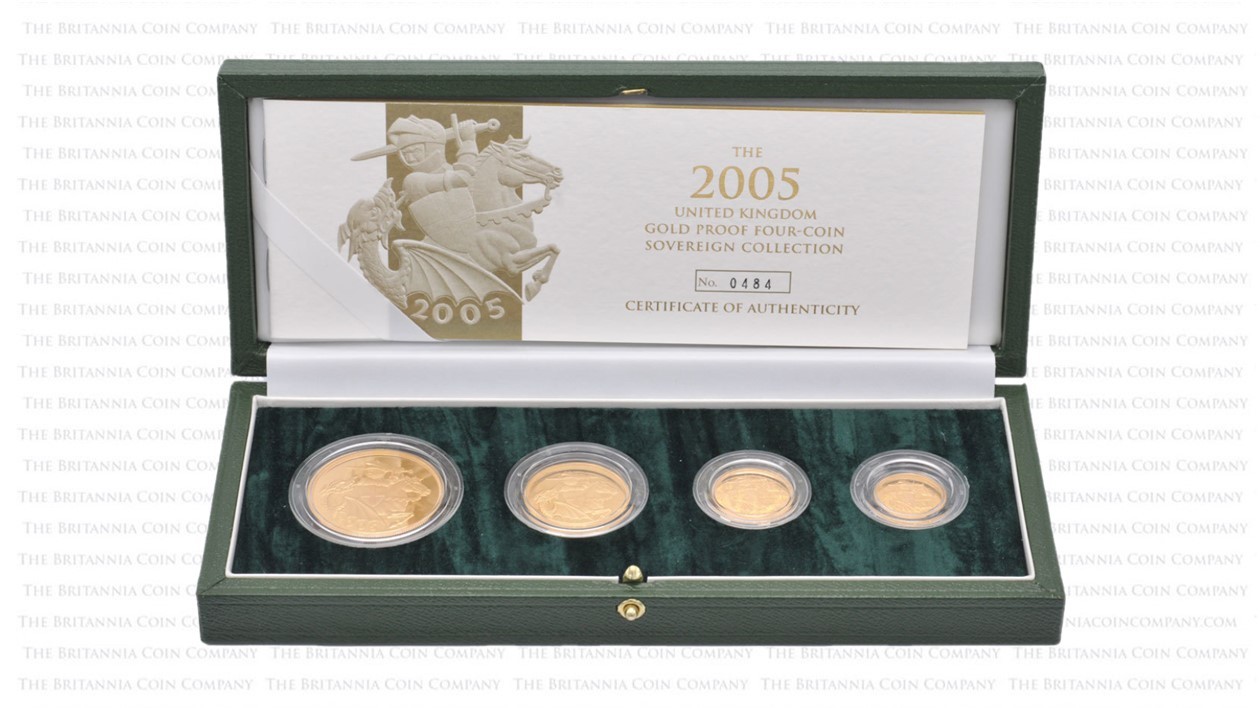 Proof Sovereign sets may contain the full Sovereign 'family' for the year of issue. That would be four coins from 1980 when the first of these modern proof sets were sold, rising to five coins in 2010 with the introduction of the Quarter Sovereign. Sets might also include just four or three proof coins from the issue. Commemorative medals and additional denominations may also be included.

Only recently have The Royal Mint started printing the year on the front of their proof Sovereign boxes. If you handle a lot of them though, you can get good approximately date the Sovereign by its box, without looking at the coin itself.

There's been several different box types used so far for modern proof Sovereigns. MJ Hughes Coins breaks down the chronology into five types but I think seven is more accurate:

Keeping hold of the box protects the coin and adds to resale value. Our proof Sovereigns are always offered in their original box of issued with their certificate of authenticity included, unless stated otherwise.

Other Sorts of Sovereigns

Piedfort Sovereigns: The first of these double-weight, double-thickness Sovereigns were issued in 2017 with further limited issues offered in 2018 and 2019.

BU Sovereigns: Brilliant Uncirculated Sovereigns are generally offered in a small box or folder, protecting the finish from damage. They have a higher level of detail compared to bullion Sovereigns but are more affordable than proof coins.

Strike of the Day Sovereigns: Since 2012 The Royal Mint has been offering limited edition brilliant uncirculated Sovereigns, struck on the day of an important event of anniversary. Examples include royal birthdays and the 75th anniversary of VE Day.

Half Sovereigns: Half Sovereigns were introduced at the same time as the modern 'full' Sovereign and have been offered commercially in a proof format first 1982 then regularly from 1985 onwards. We offer proof Half Sovereigns individually as well as mixed-year bullion coins.

Historic Sovereigns: We also stock a range of historic Sovereigns, minted in the nineteenth and early twentieth centuries. This includes branch mint Sovereigns, struck in Australia, India and South Africa as well as rare errors and variations, sought-after by collectors. 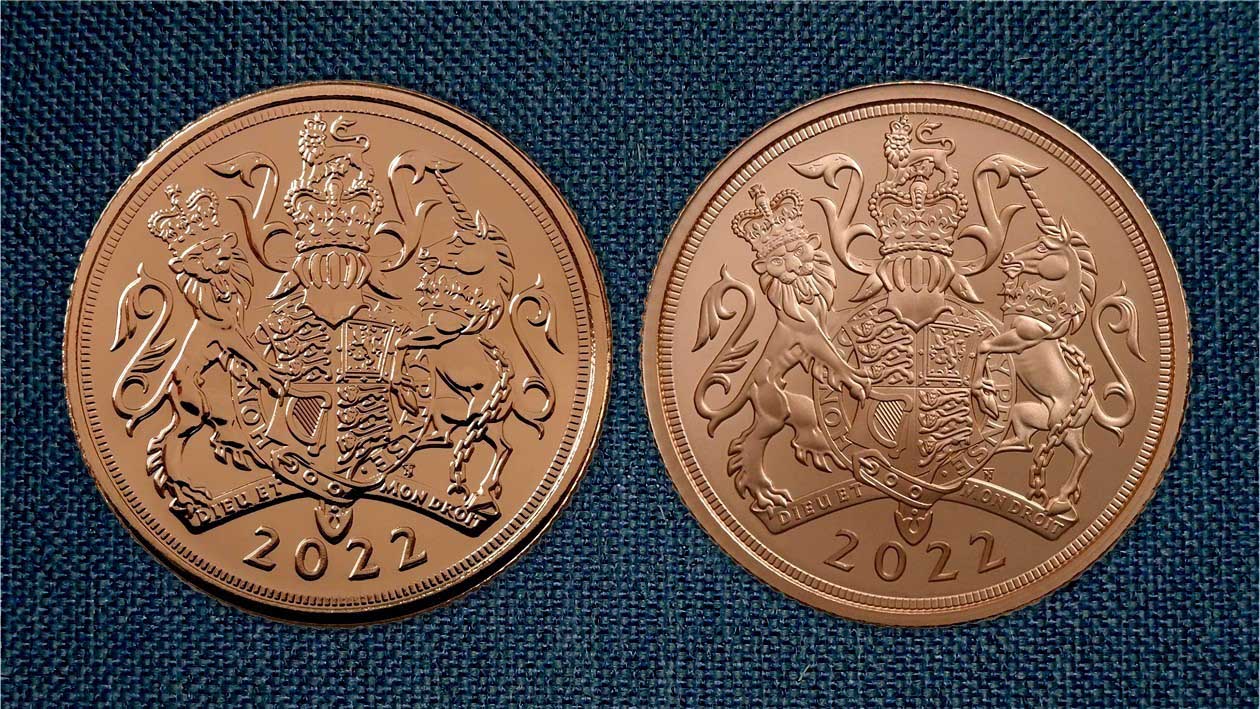 The same designs appear on 2022 bullion Sovereigns (left) and 2022 proof Sovereigns (right) but the finishes - and the mintage numbers - are quite different.

Portraits of Charles, Prince of Wales on British Coinage