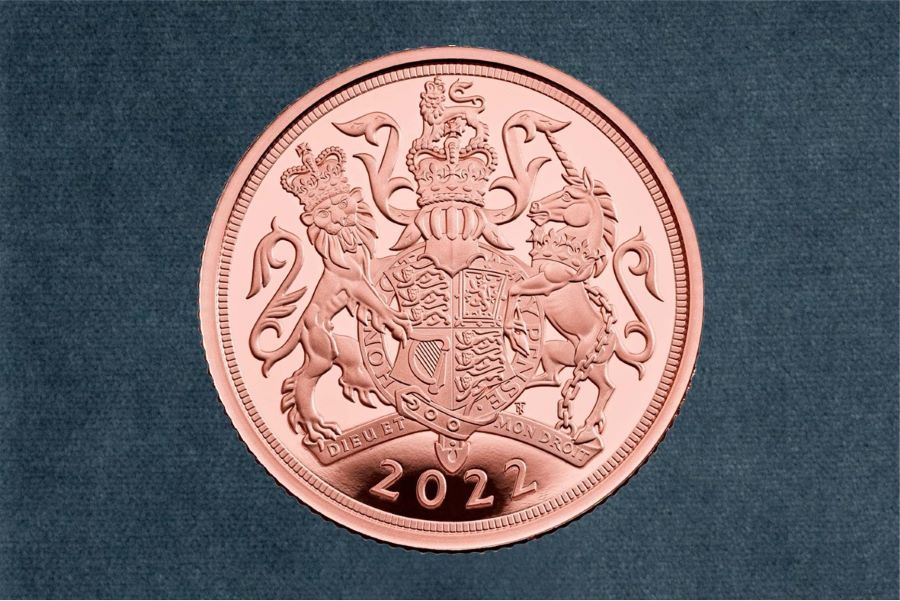 The 2022 Sovereign is finally here! We spent much of the summer speculating about its reverse design based on hints dropped by The Royal Mint. We were pretty happy with our mock-ups but now the real coin has been revealed it's time to take a closer look at this new release, struck to celebrate the Queen's Platinum Jubilee.

In The Britannia Coin Company WhatsApp group we spend a lot of time debating the details of royal proclamations about new coinage. Published in The London Gazette, these announcements give tantalising hints about the designs and specifications of forthcoming Royal Mint releases.

It's always fun to try and predict what new coins will look like and a pair of June 2021 notices gave us lots to think about, dealing as they did with the eagerly anticipated 2022 Sovereign collection.

The key line we cottoned onto was a brief description of a new reverse:

'… a depiction of our Royal Coat of Arms and the date of the year.'

This meant that gold coins issued for 2022 would not feature the classic Saint George and the dragon design, crafted for the first modern Sovereigns by Benedetto Pistrucci in 1817. Based on the published snippet, our talented photoshop ninja Steve got to work, designing his best guess as to how the 2022 Sovereign might look. 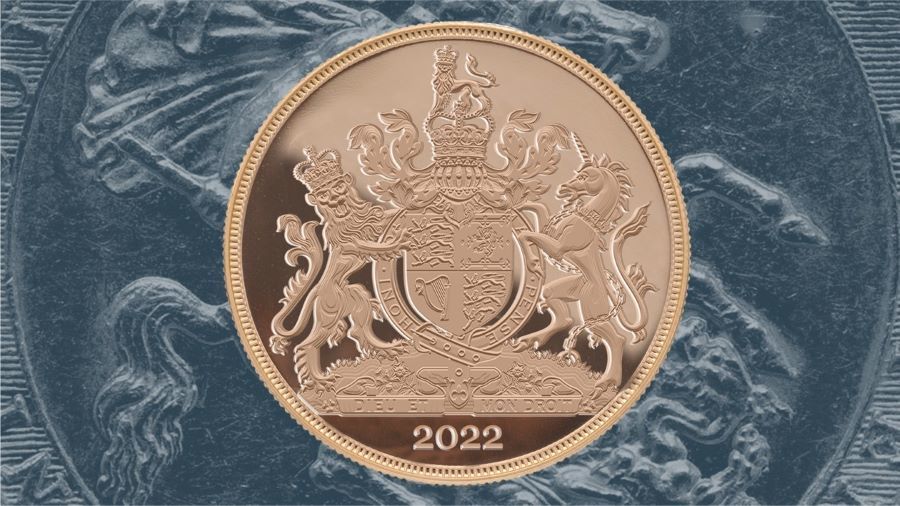 Our best guess on the 2022 royal arms Sovereign reverse, prior to the actual design being revealed.

No disrespect to Steve but the real thing is truly lovely. The work of heraldic artist Timothy Noad, it has the same bones as our mock-up - there's lots of rules surrounding the royal arms meaning you can only change so much - but with the flair you would expect from such an esteemed designer.

Noad has crafted two previous Sovereign reverses as well as well as producing engravings for The Royal Mint’s Tower of London collection among other coin commissions. 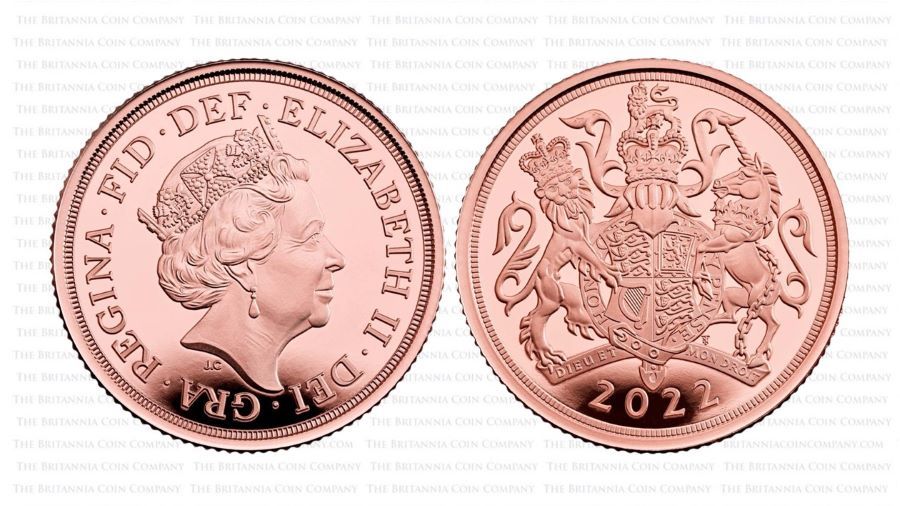 Timothy Noad's royal arms reverse for the 2022 Sovereign (right) is paired with Jody Clark's official coinage portrait of Her Majesty, in use since 2015.

The royal coat of arms of the United Kingdom - a heraldic achievement composed of shield, supporters, a crest and a motto - contains numerous symbols that speak to national history and identity. That’s why variations on this design have been used on a host of recent and historic coinage: it's emblematic of centuries of tradition.

Noad's design shows the full achievement, including the lion and unicorn, their tails mirroring the curves of the mantling either side of the crown. It's a richly detailed motif that manages to appear clean and balanced, filling the surface of the coin.

Speaking of the 2022 Sovereign, Noad said:

The connection Noad makes between the monarch and the Sovereign is an important one and his marvellous design is a fitting tribute to mark a unique, upcoming royal occasion.

In February 2022 Her Majesty the Queen will celebrate her Platinum Jubilee. This will be the first time that a British monarch has celebrated seventy years on the throne. She succeeded her father on 6 February 1952 and was crowned later the same year.

We had hoped that The Royal Mint would issue a platinum Sovereign for 2022 but this new jubilee reverse is almost as good as the four day bank holiday us Brits will enjoy next year. It joins a small collection of Elizabeth II Sovereigns, issued with alternate designs to mark previous royal events like the 2002 Golden Jubilee, the 2012 Diamond Jubilee. 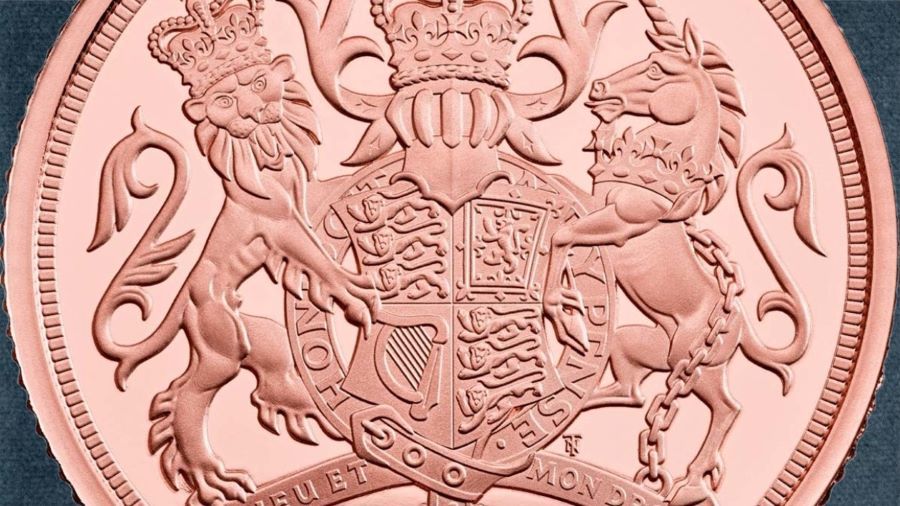 Fine detail on the royal arms reverse of the 2022 Sovereign.

While me and Steve spent a lot of time discussing possible reverse designs, our colleague Max has been pondering mintages for 2022 proof Sovereigns and thinking about the number of sets that The Royal Mint would issue. Well, we've now got those figures.

All the coins in this release feature Jody Clark's fifth official royal portrait to the obverse and, aside from the reverse, conform to the exacting standards established for the Mint's flagship denomination. Bullion coins will likely be released soon, what's on offer at the moment are proof coins, struck multiple times with hand finished dies for a flawless finish. 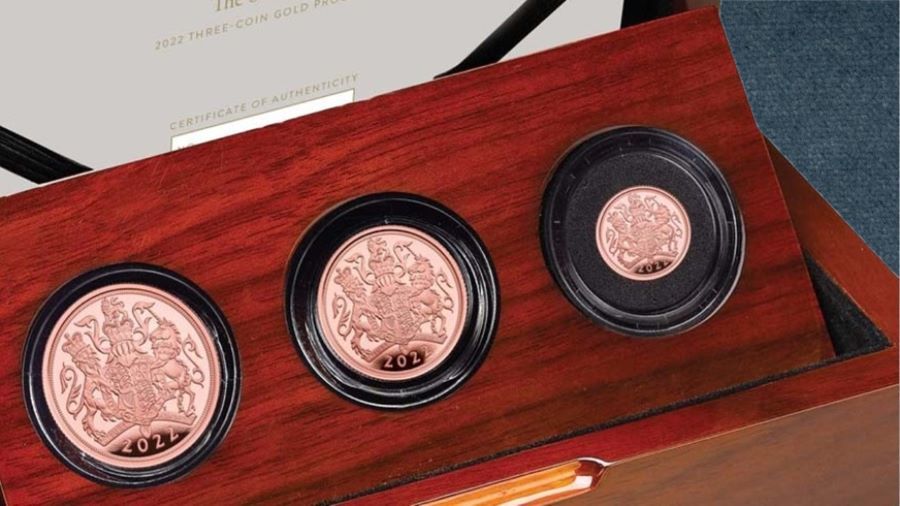 The 2022 full Sovereign, Half Sovereign and Quarter Sovereign, as they appear in the 2022 3 Coin Sovereign Set.

For more information on coins and sets in the 2022 Sovereign family, click the links above. If your preferred item is out of stock then we recommend registering your interest as we'll likely get more down the line.

Will King Charles III Wear A Crown On His Coins?