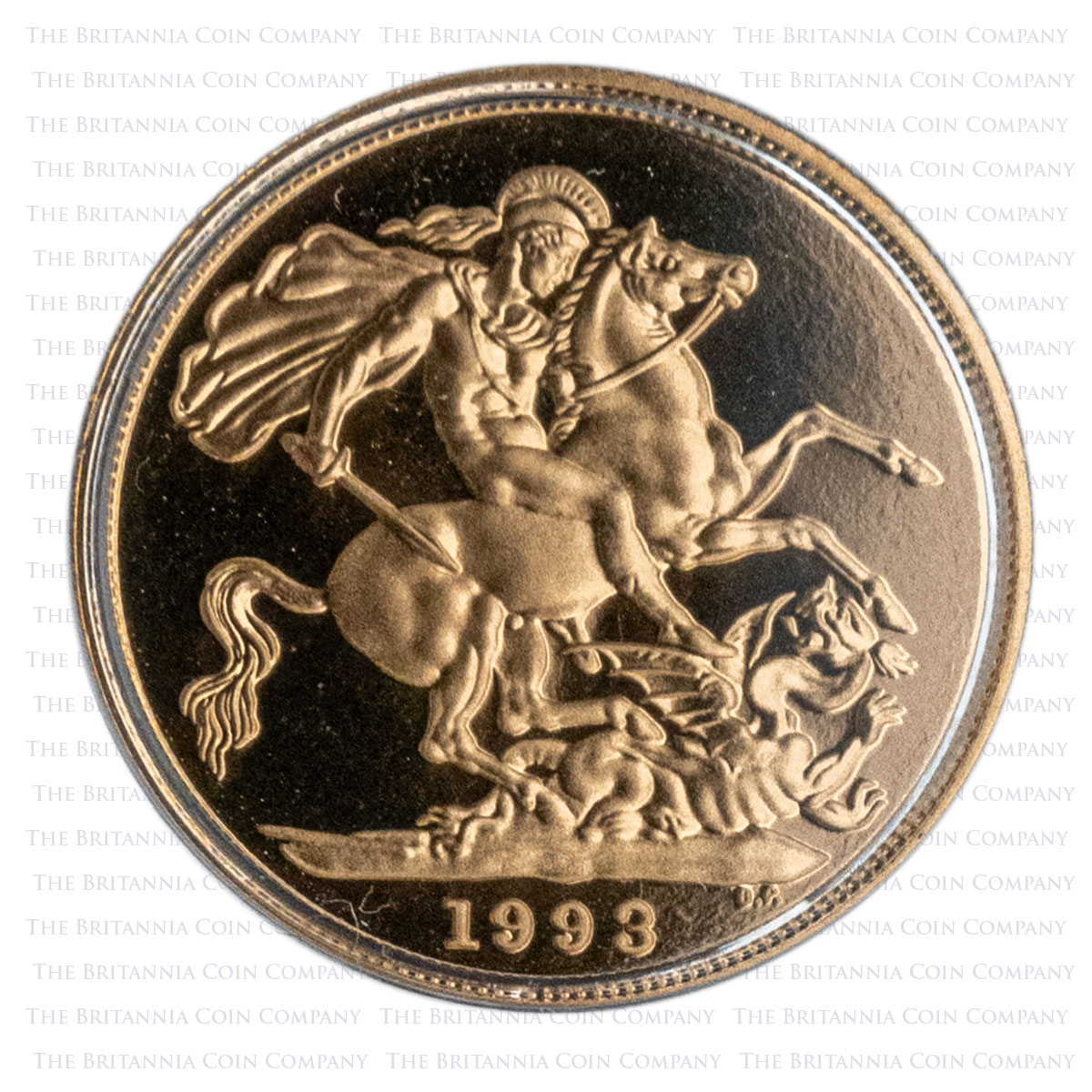 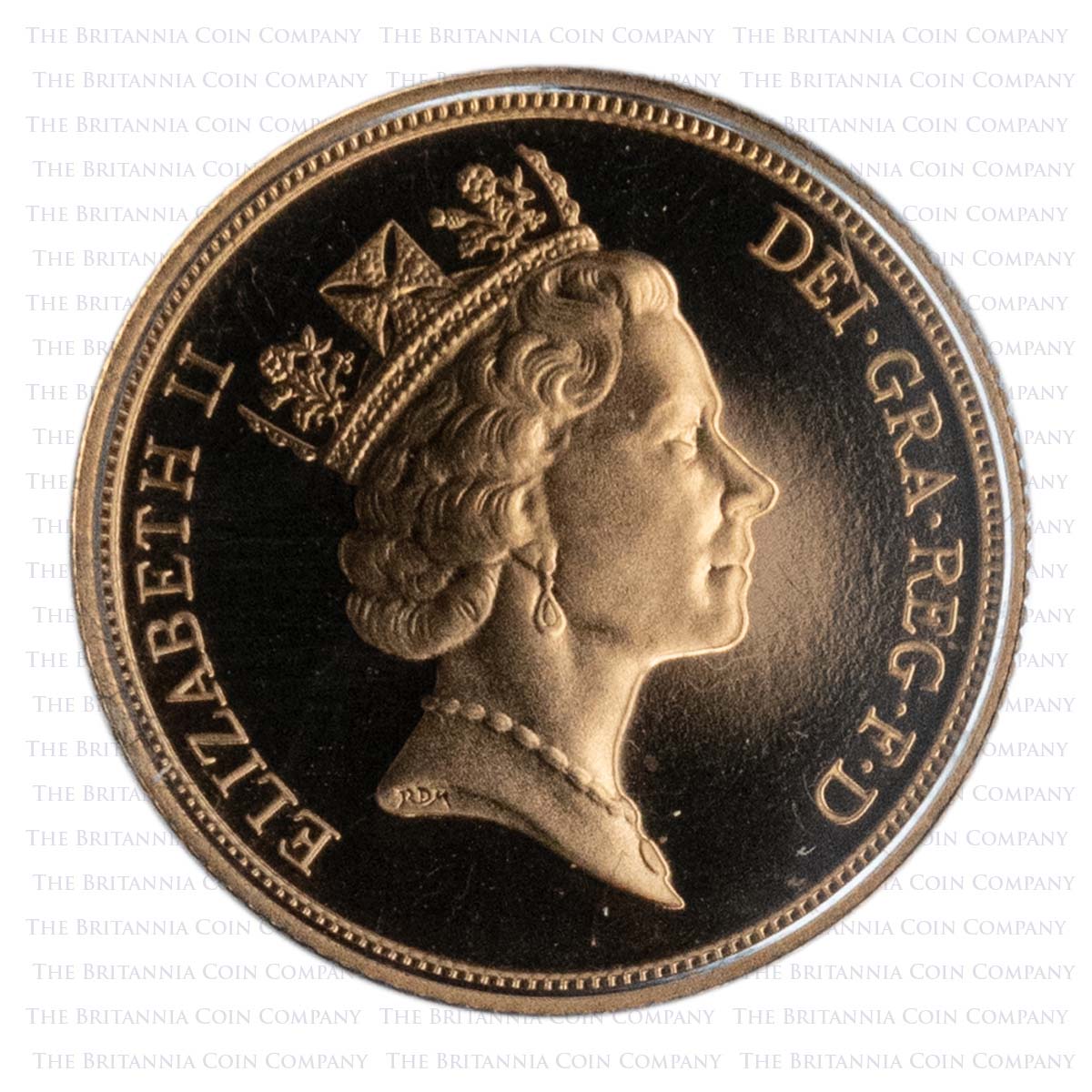 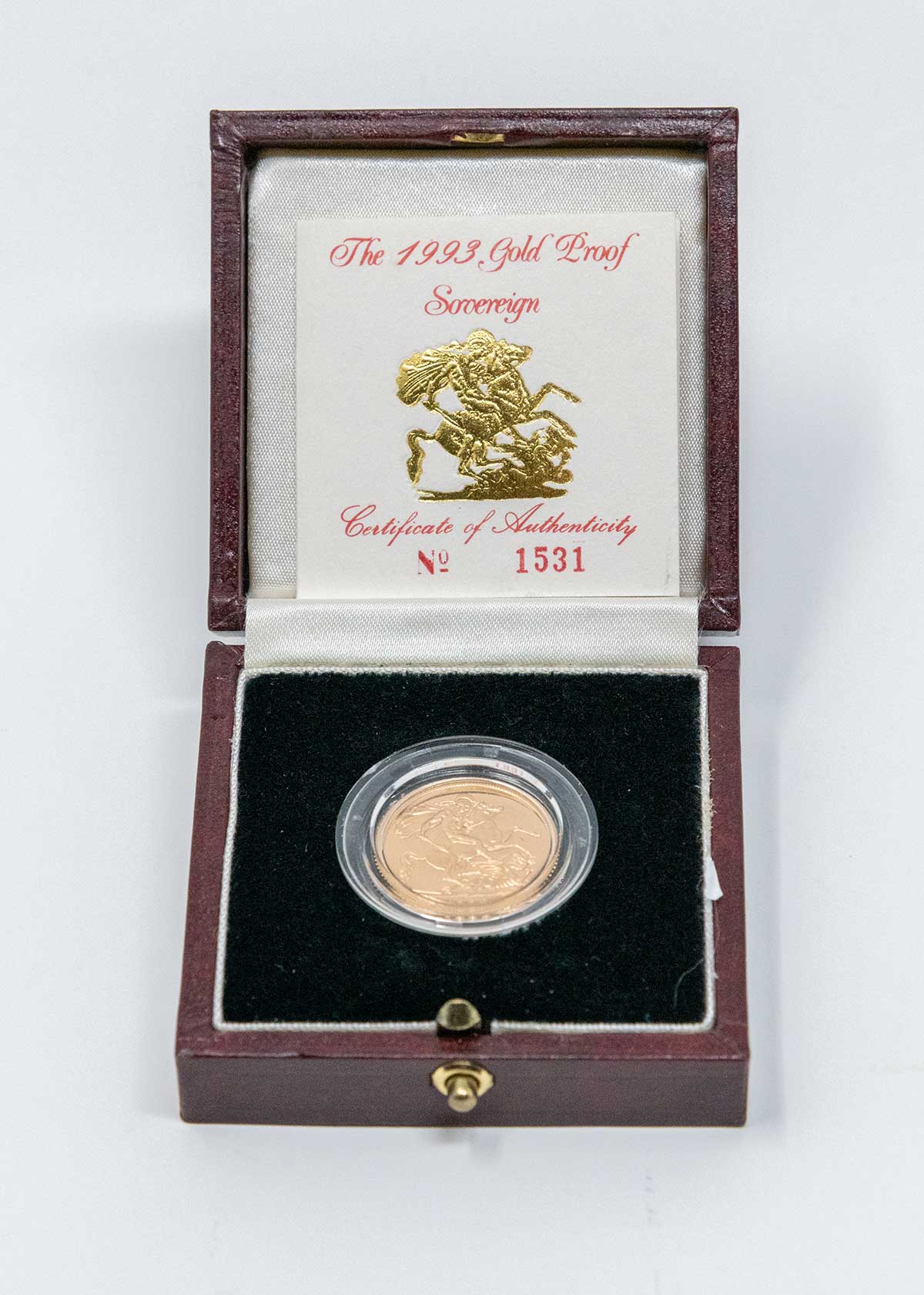 £795.00
(VAT Exempt)
Whether you are a Sovereign collector on a mission to complete your set of commemorative Full Sovereigns - or perhaps the year 1993 holds significance to you - the 1993 Gold Proof Sovereign makes a wonderful addition to any Sovereign collection. Featuring the renowned Saint George and the Dragon engraving by Benedetto Pistrucci on the reverse, and the youthful portrait of Elizabeth II by Raphael Maklouf on the obverse, this 1993 edition is one of only 4,349 minted. Like all Sovereigns, this coin weighs in at 7.98 grams and contains 22 carat gold. The Britannia Coin Company presents this 1993 Proof Gold Sovereign in its original Royal Mint packaging, along with a numbered certificate of authenticity. Buying with us also guarantees free, insured delivery.
Quantity
Cost Per Unit
Starts From
1+
£795.00
£795.00
Track Product
You are not logged in. Please Login to track this product.
Description Summary Specification Royal Mint About us

We offer to you the 1993 Full Gold Proof Sovereign. A wonderful collector's piece, The Britannia Coin Company looks at all the elements needed to help you make your decision.

After the Napoleonic Wars ended, Britain was in need of an overhaul of its currency. This brought about the Great Recoinage of 1816. It was from this that the Sovereign was reintroduced into British currency, and this required a new design to fill the reverse of the coin. The design chosen is still featured to the present day, appearing on the 1993 Proof Gold Sovereign over 200 years later. The design chosen was the Saint George and the Dragon engraving by Benedetto Pistrucci, by far his most celebrated work. This was a welcome change to previous designs. It in turn both acknowledged and respected both the patron saint of Britain, and the current monarch on the throne, George III, who had just achieved great victory at the Battle of Waterloo over the French.

Raphael Maklouf is the engraver responsible for the 'third portrait' of Elizabeth II that is seen on the 1993 Proof Gold Sovereign. This portrait featured from 1985 to 1997, with the exception of the 1989 500th anniversary Sovereign. The portrait seen here differs from the general circulation portrait of this period, which was also selected from Maklouf's designs in 1984. His initials, RDM, can be seen at the base of Elizabeth II’s neck.

The inscription on the obverse reads 'ELIZABETH II DEI ∙ GRA ∙ REGINA ∙ FID ∙ DEF∙'. Translated from Latin, this phrase means 'By The Grace of God, Queen, Defender of the Faith'. This acknowledges Elizabeth II’s role as Supreme Governor of the Church of England. A position she has held since her coronation in 1952, a similar phrase has appeared on all of her official and commemorative currency since.

The Gold Sovereign dates back over 500 years, to the reign of Henry VII in 1489. However, this is not the Sovereign we see today. In 1816, after the Napoleonic Wars, the British government enforced a huge reform of Britain’s coinage. It was by this act that the Sovereign was brought back into British currency in 1817, during the reign of George III. The first modern gold sovereign was struck in The Royal Mints' new premises in Tower Hill with their newly acquired steam powered coin press.

An instantly recognisable coin today, the Sovereign is considered to be one of the most trusted bullion coins in existence, highly coveted and relied upon by investors around the world. With a long and interesting legacy, the 1993 Gold Proof Sovereign makes for an excellent way to own a relic of the ages.

Due to the more intensive processes involved, Proof coins are usually issued in limited numbers. This is the case for the 1993 Gold Proof Sovereign, as only 4,349 coins were struck in this year. This is however a similar number to the years immediately before and after it. There were no bullion coins produced between 1983 and 1999, meaning that the 1993 Gold Proof Sovereign is the only example of a Sovereign that you will find from this year.

The Sovereign today adheres to standards that were introduced when they were reintroduced in 1817. The 1993 Gold Proof Sovereign also meets this rigorous criteria.

Each Full Gold Sovereign contains copper weight, which is what lends the Sovereign its warm reddish tone.

The dimensions also meet strict guidance, with every Gold Sovereign having a diameter of 22.00 millimetres and a thickness of 1.52 millimetres.

Over 25 years since this coin was minted, fewer and fewer 1993 Gold Proof Sovereigns are coming to the market. If you are working to complete a Proof Sovereign collection then it’s important to acquire these dates when they become available.

As well as appealing to collectors of commemorative coins, Proof Sovereigns like the 1993 issue are an excellent way to diversify your investment portfolio for several reasons:

Here at The Britannia Coin Company we can’t recommend the 1993 Gold Proof Sovereign enough. Secure yours today and get free insured delivery on your order. Any questions? Call or email today and our expert staff will be pleased to assist. 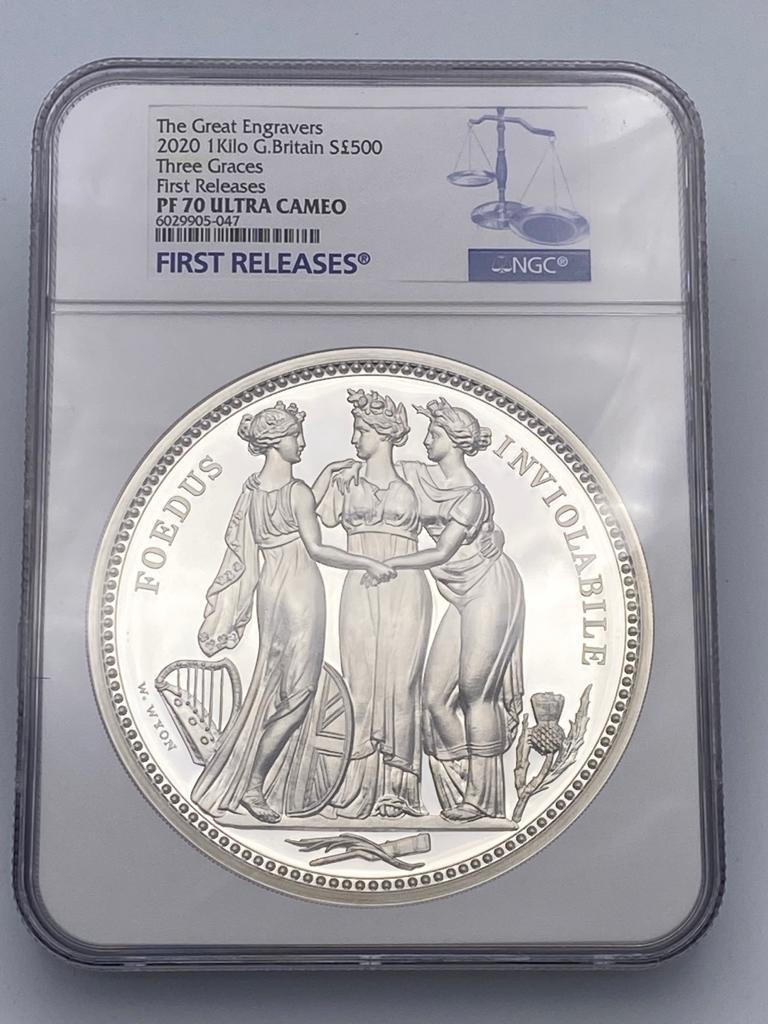