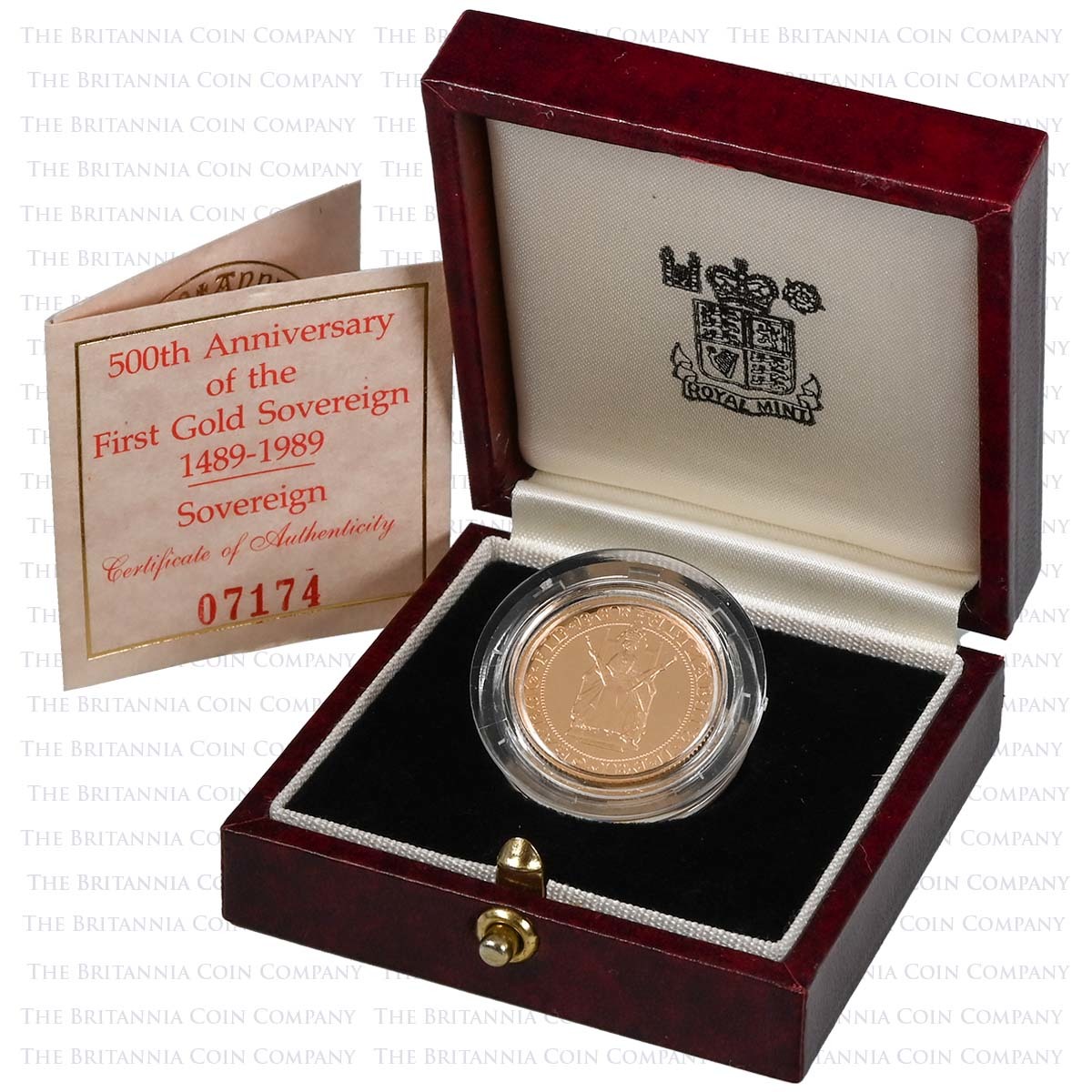 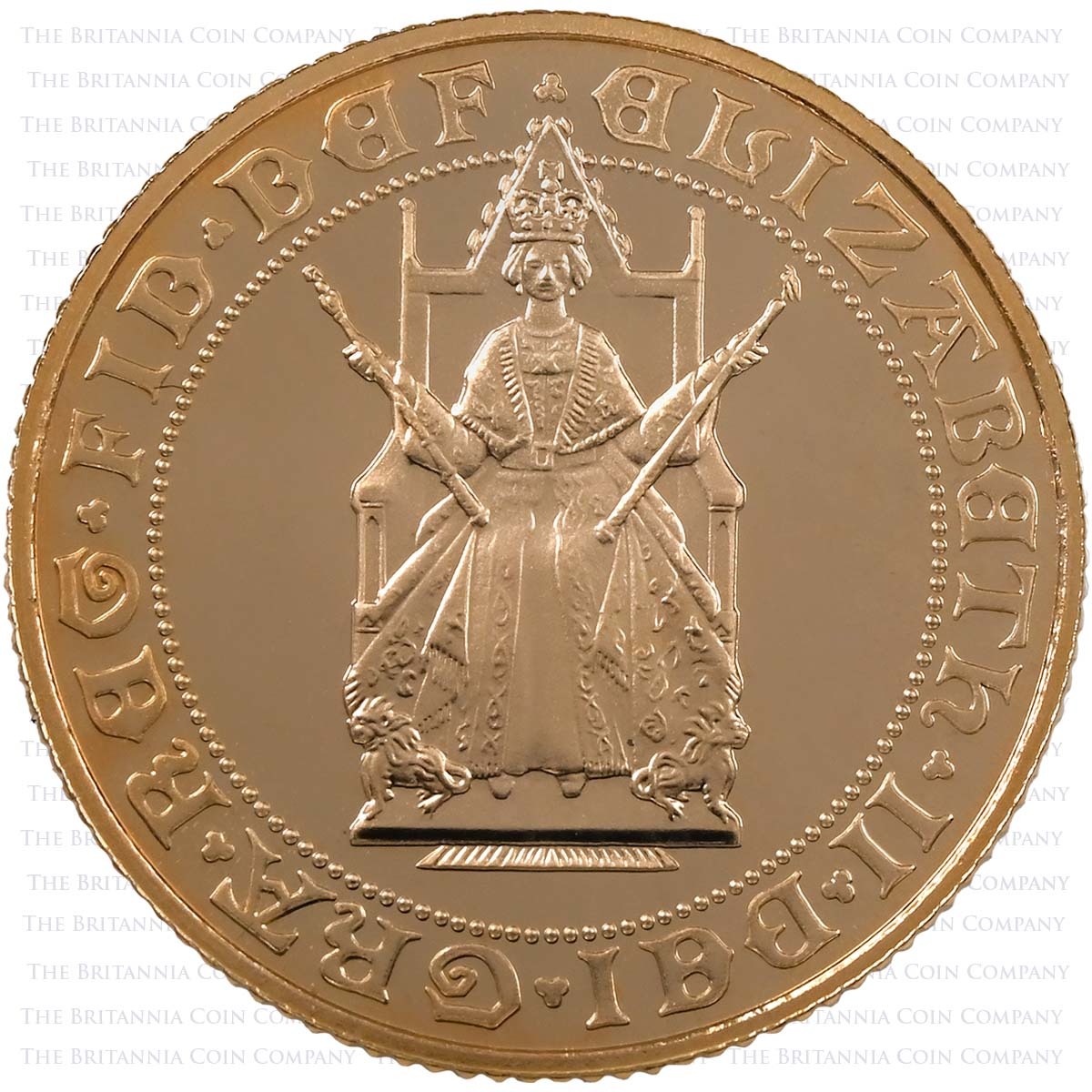 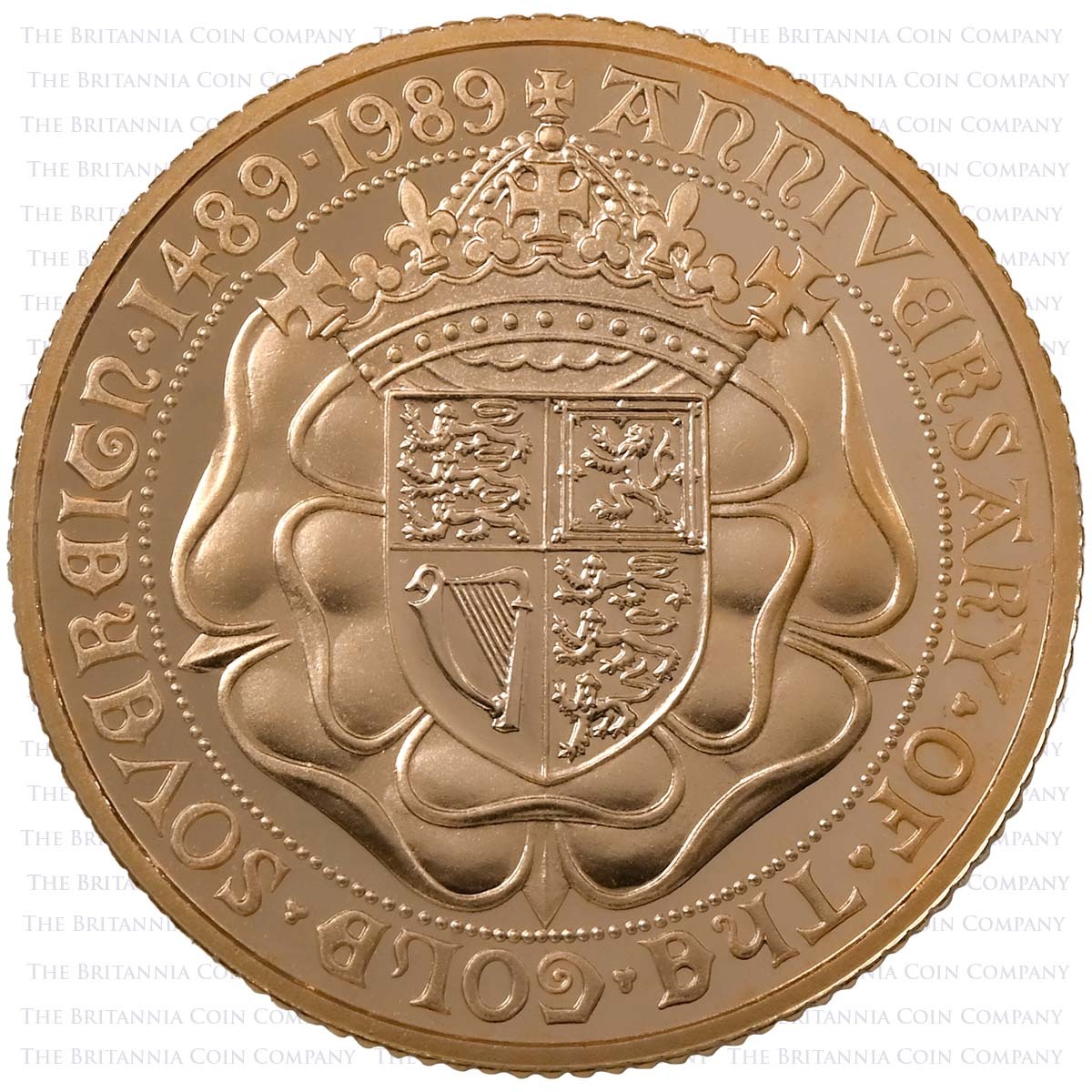 from
£1,995.00
(VAT Exempt)
Limited edition 1989 proof Sovereign, struck to celebrate five hundred years of these remarkable gold coins. Introduced in the reign of Henry VII, these large and prestigious Tudor coins gave their name to the modern Sovereign, introduced in 1817. This commemorative gold Sovereign reflects the rich, decorative designs of the historic coin with a unique obverse and reverse design, both by British artist Bernard Sindall. His obverse shows an enthroned portrait, surrounded by gothic letter is the first coinage portrait of Elizabeth II to show the Queen full length, seated upon a throne. The reverse shows the crowned royal arms set on a Tudor rose. The reverse legend is unusual in that it uses the word ‘Sovereign’ - the first time this denomination has been named on the coin itself. This celebratory design was only used on Half Sovereigns, ‘full’ Sovereigns, Double Sovereigns and Quintuple Sovereigns issued in 1989 and then in very limited numbers. This proof Sovereign is one of 23,471 issued in this presentation. It’s finished to finest proof standard in 7.98 grams of 22 carat gold with a diameter of 22.05 millimetres. We’re offering this piece in its original box from The Royal Mint with a numbered certificate of authenticity.
Quantity
Cost Per Unit
Starts From
1+
£1,995.00
£1,995.00
Track Product
You are not logged in. Please Login to track this product.
Description Summary Specification Royal Mint About us

1989 proof finish 'full' Sovereign with unique obverse and reverse designs to celebrate the 500th anniversary of the denomination.

The very first gold Sovereigns were struck in 1489, during the reign of Henry VII: the first King of the Tudor dynasty. These early English Sovereigns were much larger than those issued today but their prestigious legacy was reclaimed when a new gold coin was issued in the nineteenth century.

500 years after those Tudor coins were struck, the long history of the Sovereign was celebrated with unique, one-year-only obverse and reverse designs by British artist Bernard Sindall, used across coins in the Sovereign family.

Sindall was inspired by the earliest hammered Sovereigns. Surviving examples feature a complex design, filled with symbols of royalty and imagery associated with the Tudor monarchs, most prominently the instantly recognisable Tudor rose.

What Portrait Is Used On 1989 Gold Sovereigns?

500th anniversary Sovereigns, including the 1989 proof 'full' Sovereign display the image of Elizabeth II, facing forward from King Edward's Coronation Chair and holding the Sovereign's Sceptre and Rod of Equity and Mercy. The 1989 Sovereign was the first time that the Queen was shown seated on her coinage. The inscription that circles the portrait in ornate gothic lettering reads: 'ELIZABETH · II · DEI · GRA · REG · FID · DEF'.

The reverse this proof Sovereign features a shield of royal arms, ensigned by an open King's Crown, set upon the double Tudor Rose. The legend reads: 'ANNIVERSARY · OF · THE · GOLD · SOVEREIGN · 1489 · 1989'. This is the first and only time that the word 'Sovereign' has appeared on a British coin though foreign mints sometimes used the word. Ordinarily, Royal Mint Sovereigns do not bear their denomination.

Sovereigns minted in 1989 are among the most sought after by collectors.

This coin is one 23,471 proof Sovereigns issued in this individual presentation in 1989.

It's finished to proof standard and comes in its original box with a numbered certificate of authenticity. Despite the variant design, this Sovereign otherwise conforms to the specifications set down for these coins in 1817: it's composed of 7.98 grams of 22 carat gold and has a diameter of 22.05 millimetres.

We also offer the 1989 proof Half Sovereign and a range of sets including the 1989 three-coin Sovereign set and the full, four-coin collection. These are all are exempt from Capital Gains Tax as UK legal tender and free from VAT in the UK and EU as investment grade gold.

How To Sell A 1989 Proof Sovereign

We buy 1989 gold proof Sovereigns for top prices. Got one of these or other gold coins that you're looking to sell? Use our Sell Your Coins page to get a free, no-obligation quote from home today.