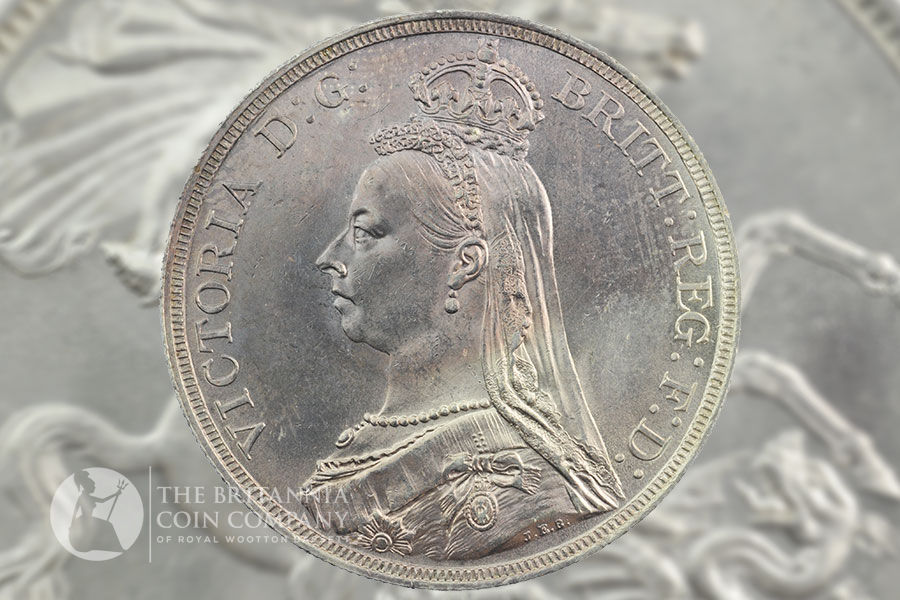 The Crown coin is an enduring piece of British coinage, with a long and winding history. Today, small numbers of Crowns are struck to commemorate big moments in British culture. But almost 500 years ago, large volumes of Crowns were issued into circulation for everyday use.

So where exactly does the story of the crown coin start?

The first crown ever struck, the one that would start off a near continuous stream of crowns up until today, was issued in 1526 by Henry VIII. With a Tudor rose adorning the reverse, the coin was known as Crown of the Rose and is very rare today. It was a rather short lived coin at the time, and within a few months it was replaced by the Crown of the Double Rose. This coin showed the Tudor rose topped with a crown on the reverse, with the king’s initials either side, sometimes alongside the initials of his consorts. Worth five shillings, it was more convenient than the first crown’s value of four shillings and sixpence, and following crowns kept this value for many years to come.

Aside from when Britain was under the reign of Mary, and then Mary and Phillip, gold crowns continued to be issued until 1662.

It wasn’t until 1662 that the last gold crown was minted – that of Charles II. But silver crowns continued to be issued.

The very first silver crown was issued in 1551, under the reign of Edward VI, the son of Henry VIII. Henry VIII, who had overspent to fund his own lifestyle and various wars, introduced a policy of debasement. This meant the amount of silver and gold in coins were reduced and, in some cases, completely replaced with cheaper metals.

While it wasn’t until 1560 that all debased currency was removed from circulation, Edward VI threw out the debasement policy and issued England’s first silver crown in 1551, adorned with a design of the king himself atop a horse.

No new crown coins were issued during Mary’s reign and the next silver crown was issued by Elizabeth I; her crown coins showed a portrait of herself with the Royal sceptre and orb. When James I ascended the throne in 1603, he reverted the silver coins back to equestrian designs similar to those of Edward VI.

Under the reign of Charles I, lots of silver crowns were issued, many by the Royalists during the civil war, the most famous being the Oxford Crown. Then, under Oliver Cromwell, the first milled silver crown was struck. Produced by Thomas Simon, it featured a portrait of the Protector, with a shield on the reverse and a legend that translated to ‘Let no one remove these letters under penalty of death’ around the coin’s edge to help prevent the illegal practice of clipping.

From 1662 to 1751, this design was replicated on silver crowns, hardly changing. During the reigns of Queen Anne (1702-1714) and George II (1727-1760), however, crowns also displayed the words ‘VIGO’ or ‘LIMA’, signalling that they were produced from silver that had been seized from the enemy.

Between the years of 1751 and 1818, no new crowns were struck due to the lack of silver, but in 1818, British currency was in need of stabilising after the trials brought about by the Napoleonic and the French Revolutionary wars. The Great Recoinage of 1816 was set in motion, which was to entirely change Britain’s coins for good. As well as taking the Guinea out of circulation and reintroducing the Gold Sovereign, new silver coins were minted once more.

It was then that designer Benedetto Pistrucci produced his famous St George and the Dragon design that was to adorn the reverse of the silver crown and make its appearance on our coinage for years to come.

The End of the Crown in Everyday Coinage

In 1847, William Wyon designed the next iconic crown coin – the Gothic Crown. It’s highly considered by today’s collectors, but was replaced by Benedetto Pistrucci St George and the Dragon design once again in 1887.

This beloved design continued to adorn coins until the end of Queen Victoria’s reign in 1901, then again in 1902 for Edward VIII. From this time forward, however, the crown was no longer struck for everyday use. But that wasn’t the coin’s end – to this day, crowns continue to be produced to mark the country’s most memorable occasions.

During George V’s reign, a small amount of silver crowns were produced with a new design: a crown within a wreath. In celebration of George V’s Silver Jubilee in 1935, however, a larger number of commemorative crowns were issued.

Under the reign of the next monarch, King George VI, two further crowns were made. The first, struck in 1937, had a Royal Coat of Arms on the back. The other was the first ever cupro-nickel crown, produced in 1951 to commemorate the Festival of Britain and the 400 year anniversary of the first crown coin.