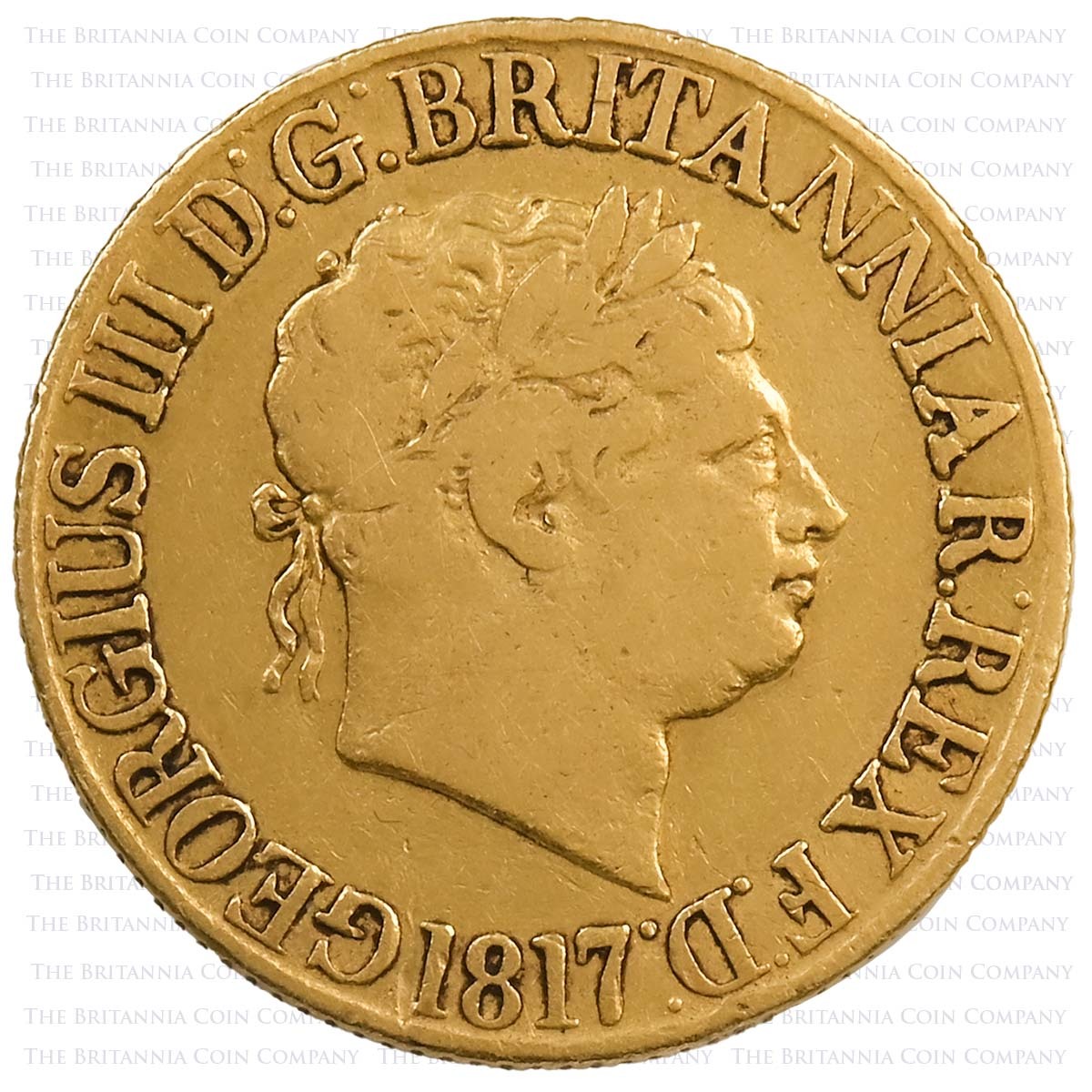 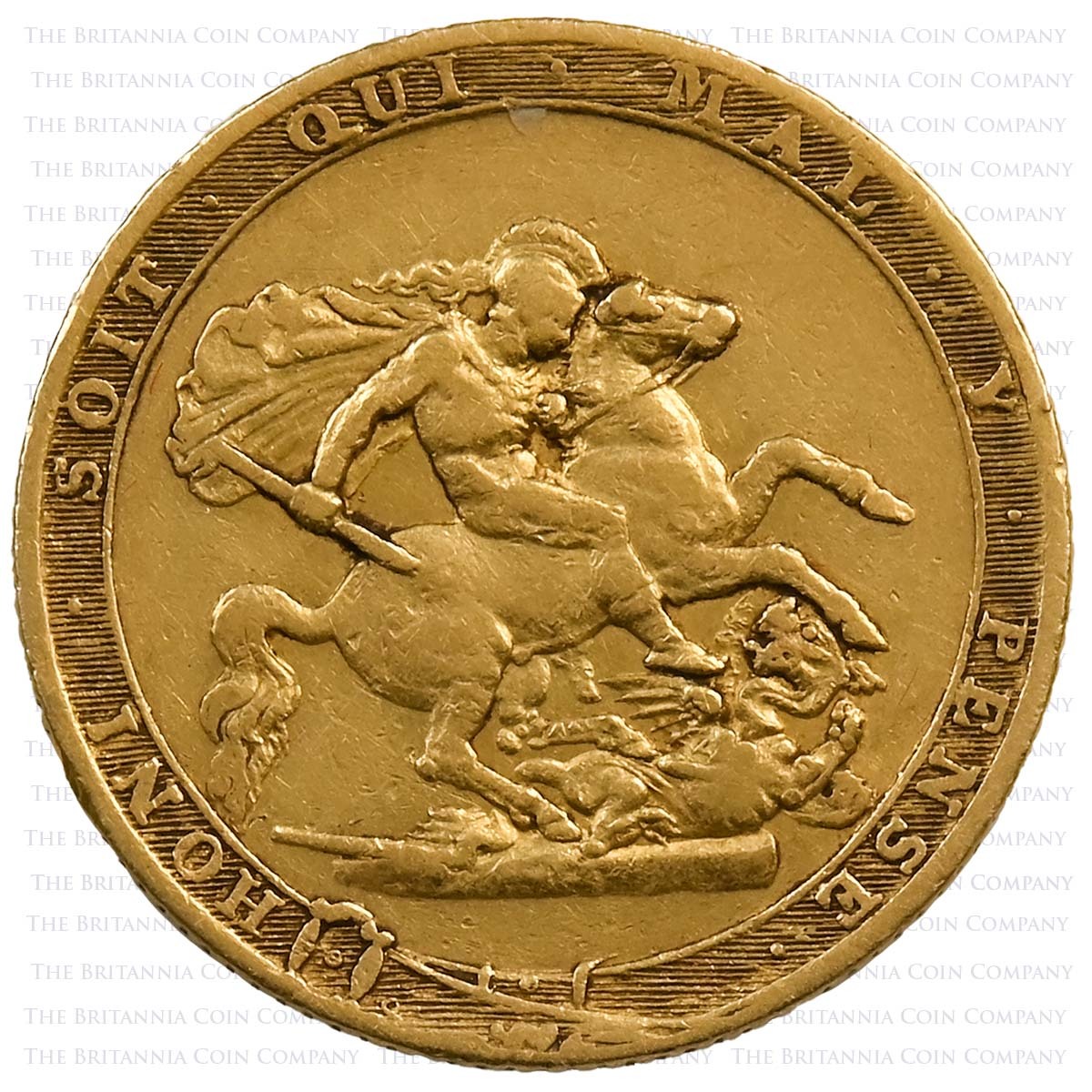 from
£1,350.00
(VAT Exempt)
The first modern Sovereign. Struck in 1817 during the reign of George III, it took its name from an earlier Tudor coin. It was introduced to circulation as part of the Great Recoinage: an overhaul of British money instituted in the aftermath of the Napoleonic Wars. The obverse of this iconic piece shows a laureate portrait of the king by Italian artist, Benedetto Pistrucci. The reverse will be instantly recognisable to anyone with a passing interest in numismatics. Also by Pristrucci, it’s a dynamic design, inspired by the legend of Saint George and the dragon. It shows England’s patron saint, armed with a broken spear and mounted on a horse which rears over a prone dragon. This motif is surrounded by a garter. Struck in 7.98 grams of 22 carat gold with a 22.05 millimetre diameter, this 1817 coin established the specifications for all subsequent Sovereigns. As the first in its series, this piece, graded F/GF, is an essential addition to any gold Sovereign collection.
Log in to get notified when this product is back in stock.
Track Product
You are not logged in. Please Login to track this product.
Description Summary Specification About us

The first modern gold Sovereign: issued in 1817, late in the reign of King George III.

Named for an earlier gold coin, issued by the Tudor kings, the first modern Sovereigns were issued in 1817, late in the reign on King George III. They were introduced as part of an overhaul of British money which came to be known as the Great Recoinage, instituted in the aftermath of the Napoleonic Wars.

The gold coins issued in 1817 established a set of specification used to this day. Full Sovereigns are composed of 7.988 grams of 22 carat gold, meaning they have a consistent gold weight of 7.322 grams of pure gold. Each coin measures 22.05 millimetres in diameter.

Sovereigns once circulated across the globe, a symbol of the British Empire, trusted to contain a known quantity of gold. Regular production ceased with the First World War, only resuming in 1957. Today, Sovereigns are offered annually though few are more sought after than those struck in 1817.

The design used on the reverse of this gold coin has become synonymous with the Sovereign and is instantly recognisable to coin collectors.

Depicting a helmeted, spear wielding warrior, mounted on a horse which rears over a cowering dragon, this is Benedetto Pistrucci's interpretation of the legend of Saint George. The central motif is surrounded by a stylised garter which bears the motto of the Order of the Garter: 'HONI · SOIT · QUI · MAL · Y · PENSE'. The spear would later be replaced with a sword and the garter dropped altogether.

This is paired with a right-facing, laureate portrait of George III by the same Italian artist with the date in the legend. As with all subsequent Sovereigns, the denomination is not mentioned on the coin at all.

Rare and Highly Sought After

A significant number of Sovereigns were struck in this year though many were melted down and few are available in good condition. More than two hundred years later, these coins are still being struck, making the first in the series a key acquisition for the serious collector.

This example shows the usual wear and hairline scratches for circulated gold. The details are clear, the reverse better: Grade: Approaching Fine (AF).