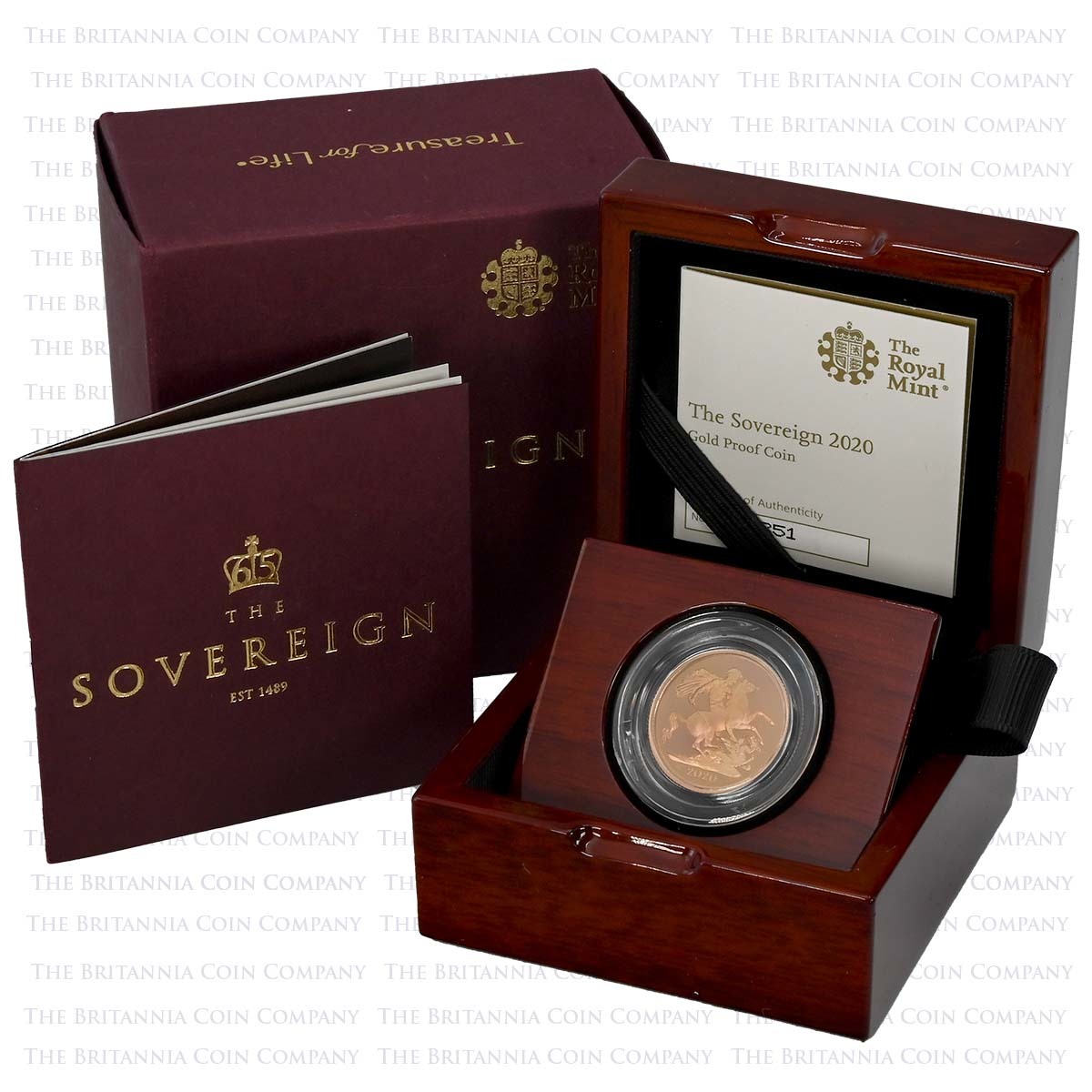 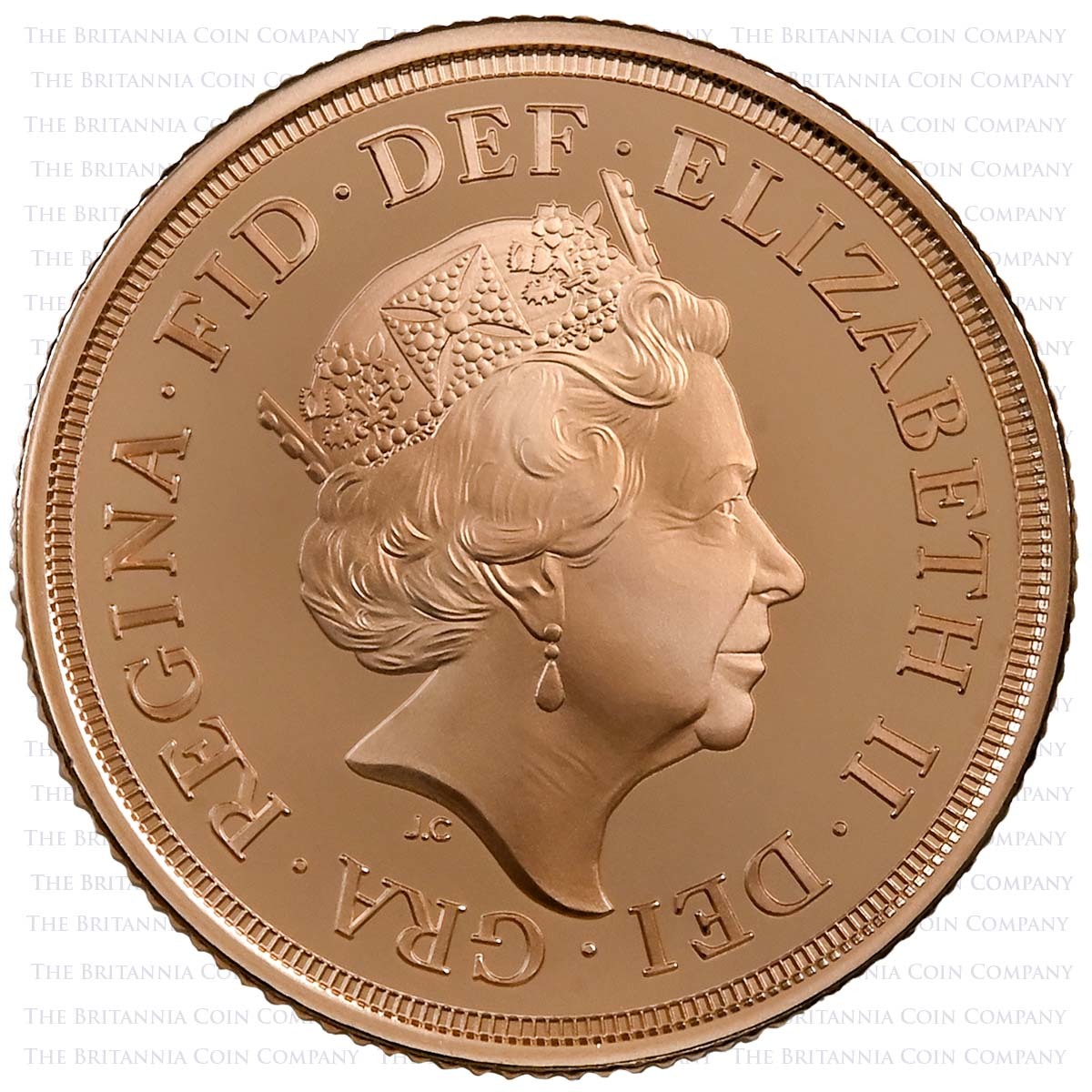 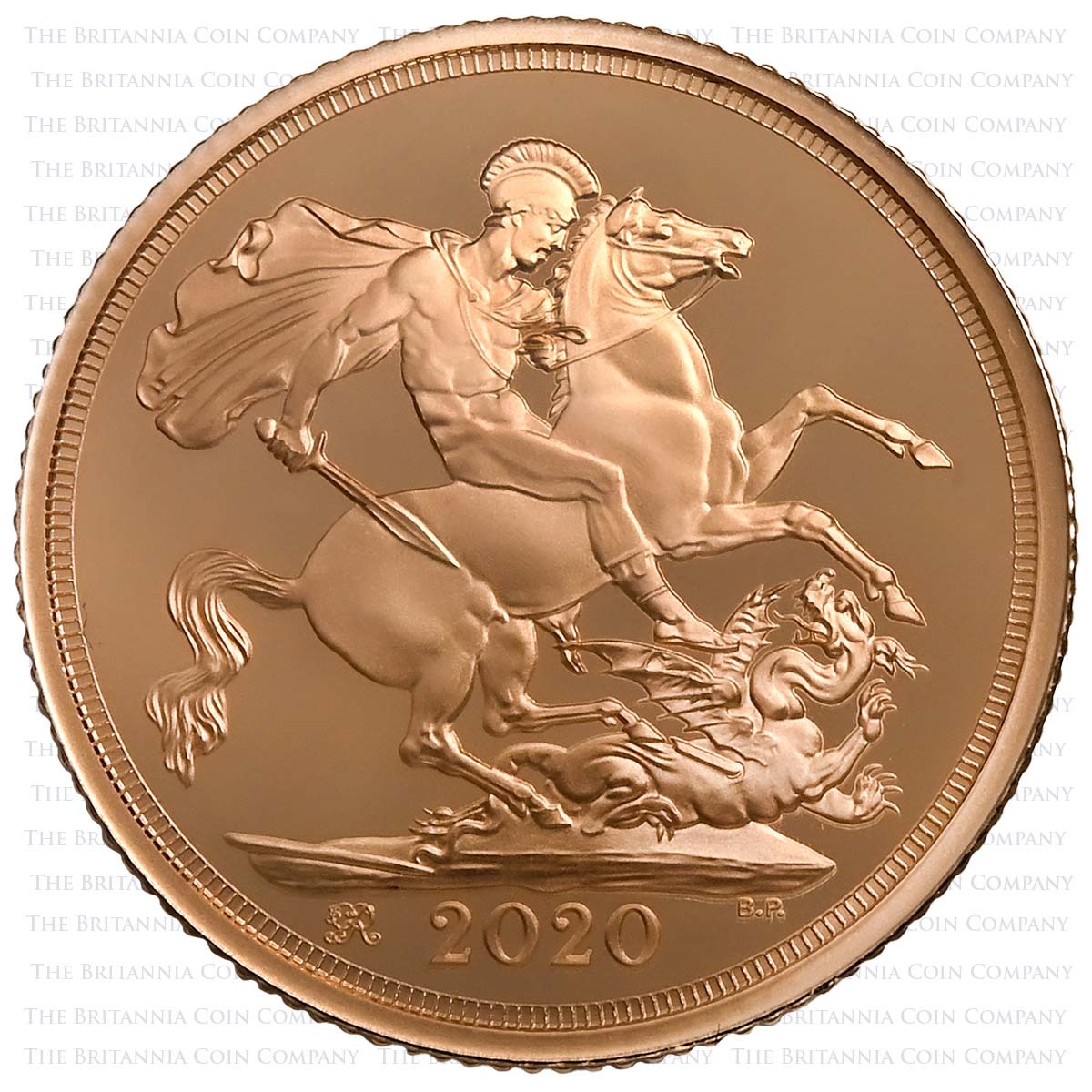 £595.00
(VAT Exempt)
Gold proof 2020 Sovereign with a special mint mark. The obverse of this coin features a portrait of Her Majesty the Queen by Jody Clark, in use on British money since 2015. This is paired with the classic Saint George and the Dragon reverse, designed by Benedetto Pistrucci for the first modern Sovereigns. For this year only, a tiny mint mark has been added to the left of the date on the reverse. It marks 200 years since the end of the reign of George III. He was on the throne when the modern Sovereign was introduced. The mint mark is a cypher which sits opposite Pistrucci’s initials. This coin is struck to the same specifications established during George’s reign: its composed of 7.98 grams of 22 carat gold with a diameter of 22.05 millimetres. It features a superior proof finish, achieved with multiple strikes of specially prepared dies. Just under 8,000 proof Sovereigns were offered in this presentation in 2020 and the inclusion of the royal cypher making this issue particularly desirable. You’ll receive your 2020 Sovereign in its original Royal Mint packaging with its numbered certificate of authenticity.
Quantity
Cost Per Unit
Starts From
1+
£595.00
£595.00
Track Product
You are not logged in. Please Login to track this product.
Description Summary Specification Royal Mint About us

The very first gold Sovereigns were struck in the 1400s by the Tudor kings and their prestigious legacy was reclaimed when the modern Sovereign was introduced in 1817. George III was on the British throne at the time and its his legacy that’s celebrated on the 2020 Sovereign, 200 years after the end of his reign.

For this year only, The Royal Mint authorised a special cypher mint mark to be included on the reverse of their proof Sovereigns. A cypher combines the initials of a monarch with their title. In this case, Kerry Davies' design includes an 'R' for 'Rex' and a 'G' for 'George'.

It's a subtle motif that sits next to the date on the reverse of these coins, speaking to their long history. The Sovereign has been minted to the same specification since George's reign so it's appropriate means to mark this significant anniversary.

The 2020 mint mark is a small modification to an iconic reverse design, used on Sovereigns since their inception. His instantly-recognisable Saint George and the Dragon design, crafted by Italian artist, Benedetto Pistrucci, shows England's patron saint mounted on a horse, slaying a dragon underfoot.

For the 2020 Sovereign, Pistrucci's historic reverse is paired with Jody Clark's portrait of Her Majesty the Queen. Introduced to British coinage in 2015, this fifth official effigy shows the artists initials below the traction of Elizabeth II's neck with the legend reading: 'ELIZABETH II ∙ DEI ∙ GRA ∙ REGINA ∙FID ∙ DEF'.

Your 2020 gold proof Sovereign comes in its original packaging from The Royal Mint. This comprises of an attractive wooden presentation box in which the coin is secured safely in its capsule. A numbered certificate of authenticity is enclosed.

Just 7,995 proof Sovereigns were issued by The Royal Mint in this presentation in 2020.

Like all Sovereigns, this one is exempt from Capital Gains Tax as UK legal tender and free from VAT as investment grade gold. This - added to the beautiful proof finish - makes this 2019 coin a great investment as well as an appealing collectors piece.

We have a few other options for those interested in 2020 Sovereigns: