At The Britannia Coin Company, we're passionate about Gold Sovereigns. We're excited to share our industry know-how and help you invest in new and historic Sovereigns at fair prices. Get low margins on Gold Sovereigns from a dealer you can trust by shopping our website today.

Commonly called the 'Chief Coin of the World', Gold Sovereigns are instantly recognisable to any collector. Their history and beauty give them an enduring appeal. Crafted from 22 carat gold, VAT-free and Capital Gains Tax exempt, Gold Sovereigns also make a shrewd and reliable investment.

When you buy Gold Sovereigns with the Britannia Coin Company you buy with confidence. Order through our secure website and receive your Gold Sovereign by insured, tracked delivery. If you have any questions, our expert team are happy to help. Get in touch about your investment today. 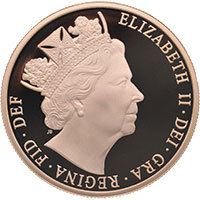 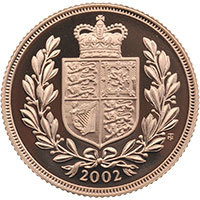 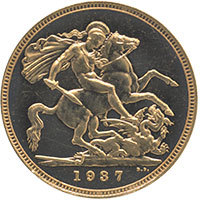 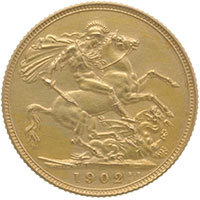 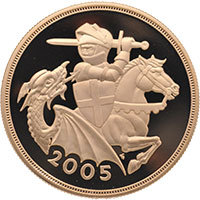 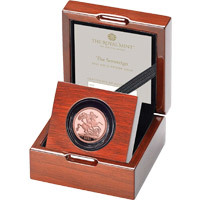 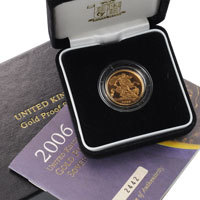 Best of British: The History of Gold Sovereigns

Centuries later, the evocative name was resurrected for a new gold coin, first issued in 1817 by the Royal Mint. The first Modern Gold Sovereign featured a striking motif of George and the Dragon, designed by Benedetto Pistrucci, that has been regularly reused on Gold Sovereigns.

Gold Sovereigns quickly became a symbol of the British Empire. They were extensively used in international trade because they were trusted to contain a reliable quantity of pure gold. Called the 'Chief Coin of the World' by some, the long history of Gold Sovereigns gives them a unique appeal.

Gold Sovereigns are still minted today though they are intended for investors and collectors, rather than for circulation. Recent Gold Sovereigns maintain the same specifications as their historic predecessors: 22 carat gold, a diameter of 22.0 millimetres and a total weight of 7.98805 grams.

Gold Sovereigns weigh in at 7.98805 grams, of which 7.32240 grams is pure gold. These coins have a fineness of 916.7, meaning that out of one thousand parts, more than 90% of a Gold Sovereign is gold. The equivalent of 22 carats, Gold Sovereigns are among the world's purest gold coins.

The remaining metal in a Gold Sovereign is copper, which gives them their subtle pinkish hue. Gold Sovereigns are not made entirely from gold because they were not originally bullion coins. Pure gold is soft and ordinary coins made from it would soon wear down as they were handled and exchanged.

Diversifying Your Investments with Gold Sovereigns

In uncertain economic times, gold is the choice of all sensible investors. During the last global recession, while property values fell, the price for gold increased dramatically. If your investment strategy favours long-term reliability, putting a portion of your capital into gold makes sense.

So why invest in coins like Gold Sovereigns, rather than gold bars? Well, the smaller initial outlay is one reason. A single Gold Sovereign will cost hundreds, compared to tens of thousands for one-kilogram gold bar. Gold Sovereigns represent an affordable bullion product for many investors.

Additionally, investors prefer the smaller size of Gold Sovereigns, compared to other gold bullion options. Holding a large number of small units gives you the option of selling portions of your portfolio at your convenience. This level of flexibility is just not possible with other bullion products.

Gold Sovereigns are legal tender in the United Kingdom. This means you could spend Gold Sovereigns like ordinary £1 coins if you chose. More importantly, it makes Gold Sovereigns free from Capital Gains Tax: the tax you pay on the profit when you sell an asset that has increased in value.

The Capital Gains Tax (CGT) free status of Gold Sovereigns means you pocket the full value when you cash in or trade. With the CGT rate set at 20% for bullion, the unlimited tax-free profit that can be realised with an investment in Gold Sovereigns makes them an attractive choice.

Made with investment-grade gold, Gold Sovereigns are also Value Added Tax (VAT) free in the UK and the European Union. Unlike silver and palladium coins, Gold Sovereigns are not subject to the current 20% standard VAT rate, which is certainly a benefit when you come to sell.

Gold Sovereigns are Sought by Collectors

Buying Gold Sovereigns is not just about gold prices and tax exemptions. Many choose to purchase Gold Sovereigns for their historical importance or their artistic merit, as well as the rarity of some examples. Indeed, these factors can also lend Gold Sovereigns value above their weight in gold.

Sometimes, quirks of history make particular Gold Sovereigns exceptionally valuable. Edward VIII's abdication in 1936 meant that the handful of his Sovereigns that were struck as pattern pieces today sell for extraordinary prices. In 2020 an Edward VIII Gold Sovereign sold for a record £1 million.

Beautiful designs can also make certain issues of Gold Sovereigns particularly sought after. Benedetto Pistrucci's remarkable George and the Dragon engraving has featured on many Gold Sovereigns. The occasions when this design is not used are particularly interesting to collectors.

A wide range of different Gold Sovereigns have been minted down the centuries. The earliest Tudor and Stuart Gold Sovereigns – bigger and heavier than their modern counterparts – are scarce, with fine examples demanding significant prices when they come to the market.

The first modern Gold Sovereigns, struck in the nineteenth-century, were intended for circulation. Examples are generally worn from time spent in pockets. Gold Sovereigns fell out of circulation in the twentieth century and, since 1979, have been minted largely as bullion and collectors' pieces.

These recent Gold Sovereigns are issued in limited numbers, meaning demand is high when they go on sale. The introduction of the Half-Sovereign, Quarter-Sovereign, Double-Sovereign and Five Sovereign Piece has opened the market in Gold Sovereigns to a range of new buyers.

Buy with Confidence from The Britannia Coin Company

At the Britannia Coin Company we are passionate about Gold Sovereigns. Our Gold Sovereigns quickly find homes in the collections of our valued customers. We are excited to share our industry know-how and help you invest in new and historic Gold Sovereigns at fair rates.

Based in Royal Wootton Bassett, Wiltshire, well known for its role in the repatriation of fallen soldiers, the Britannia Coin Company has been trading since 2008. We offer exceptional service and unbeatable value to our buyers via our website, over the phone and in our High Street showroom.

When you buy Gold Sovereigns with the Britannia Coin Company you buy with confidence. Order through our secure website and receive your Gold Sovereign by insured, tracked post. If you have any questions, our friendly staff are happy to help. Get in touch about your investment today.

Gold Sovereigns weigh in at 7.98805 grams, of which 7.32240 grams is pure gold. These coins have a fineness of 916.7, meaning that out of one thousand parts, more than 90% of a Gold Sovereign is gold. The equivalent of 22 carats, gold Sovereigns are among the world's purest gold coins.

Gold Sovereigns are favoured by those looking to diversify their portfolios with the reliability of gold. The low price per unit offers an affordable entry point to gold investment, while the historical significance of gold Sovereigns can mean they achieve sales prices above their bullion value.

Gold Sovereigns are made of 22 carat gold. They have a fineness of 916.7, meaning that out of one thousand parts, 91.67% is pure gold. The remaining 8.33% is copper, except for certain Victorian Sovereigns which also contain a small amount of silver.

No. Inheritance Tax is calculated on the value of an estate at the prevailing rate, less the current allowance. The value of any Sovereigns in an estate will need to be included in the calculation. The Britannia Coin Company can assist with Probate valuations on Sovereigns and collectable coins.

Yes. As gold Sovereigns are legal tender in the UK, they are not subject to Capital Gains Tax. This means that when you sell your Gold Sovereign you can pocket the full increase in value. The potential for unlimited tax-free profit makes gold Sovereigns an attractive investment option.

Gold Sovereigns hold a nominal face value of £1, making them legal tender in the UK. However, their actual value is much higher, thanks to their high gold content and the collectability of many issues. Calculate the bullion value of your sovereign by multiplying the current spot rate of gold in Troy Ounces by 0.2354.

The gold Sovereign family now includes a total of 5 coins. The largest is the Quintuple or five-Sovereign piece, followed by the double, full, half and finally the quarter Sovereign. Each year, The Royal Mint release a 5-coin proof Sovereign set for collectors.

Everything correct, true, effective. Fast delivery, good packaging. Thank you!
Ladislav Charouz
Great service and coin as described. Would definitely buy from again. Good communication. Sounds a bit picky, but the invoice was printed on stained paper and I keep my invoices as reference.
Jess H
Great service, free shipping, well packaged.
Jonathan Hughes
I found your prices very good indeed which prompted me to buy those coins..also the packaging was excellent and the speed of delivery was unbelievably quick..I know have you as a favorite as i will probably be buying from you again
kevin murray
Fast service and exactly as advertised. In a market currently mired in sharks and fakes it's a relief to deal with a genuine and trustworthy firm.
Alan Kelly
The coin I ordered was dispatched quickly arrived in good condition and sold at a fair price.
Peter Ryman
A search bar on the homepage
Wayne Merriman
*****
Patrick T
My first time using Britannia Coin Co after seeing other recommendations on various forums & facebook groups. Took the plunge with a tester order and was exceptionally impressed. Super fast service, great product (totally flawless quality) I have since placed a larger order with them. Britannia coin co will always now be in my top 3 dealers to look at when purchasing precious metals 10/10 A+
PAUL OWEN
quick and easy to order and the guys are very helpful want to keep this site to MYSELF LOL
David V
This website uses cookies to ensure that you have the best experience. Read our Privacy Policy and Terms and Conditions for more information.