You can divide Queen Anne's coinage into pieces issued before and after the 1707 Acts of Union brought England and Scotland together into a single sovereign kingdom: Great Britain. Gold and silver coins issued after the union show the updated royal arms and a Garter Star to the reverse. Collectors look for Queen Anne coins with the word 'VIGO' below the bust, commemorating Anglo-Dutch victory at the Battle of Vigo Bay. Post-union silver coinage may show the letter 'E' to the obverse, indicating that it was struck in Edinburgh. Sir Isaac Newton served as Master of the Royal Mint through Anne's reign. Many of her coins and medals were engraved by John Croker. 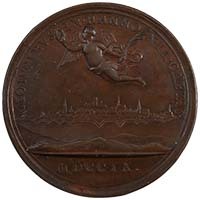 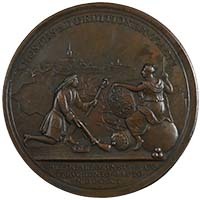 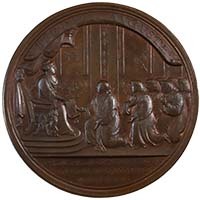 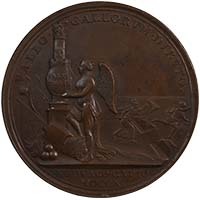 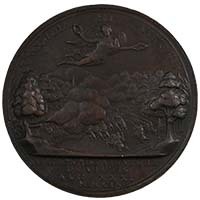 Anne was born in February 1655, the second surviving daughter of James, Duke of York, later King James II. Her father succeeded her uncle, Charles II, in 1685, beginning a short and troubled reign that would end with the Glorious Revolution of 1688 which installed Anne's sister, Mary II, and her husband, William III of Orange, a co-monarchs. Following Mary's death in 1694 and William's in 1702, Anne acceded to the throne, as Queen of England, Scotland and Ireland.

Her reign was short but dramatic, its high points documented on her coinage. Hammered coins, struck before 1662 were still in limited circulation though the number had been reduced following in the recoinage that followed the Coin Act of 1695. New machines, installed at the Tower Mint, enabled its moneyers to produce relatively uniform milled coinage through Anne’s reign in denominations that mirror those of her Stuart predecessors.

Queen Anne’s marriage to Prince George of Denmark would result in many pregnancies but no surviving heirs. This meant that upon her death in 1714 the Crown reverted to the line of James VI and I, passing to the Electors of Hanover and bringing a new dynasty to the throne.

Anne was Queen for just 12 years and within that period the portraits used on her coinage changed little. The engraver behind her coin portraits is Johann Crocker, born in Saxony and later known as John Croker. A jeweller and goldsmith, Croker migrated to England in 1691 and was employed by the Tower Mint within a few years.

The left-facing effigies that Croker rendered on master dies for Anne's gold and silver coinage were based on a a portrait of the Queen by the court painter, Sir Godfrey Kneller. The profile is beautifully rendered: Croker relies on the detail of Anne's hair - loosely knotted and pulled back with a band - as well as the folds of her clothing to communicate his talents and her nobility, rather than any decorations or symbols of office. The gold coinage (Five Guineas, Two Guineas, Guineas and Half Guineas) shows a single lock of hair falling over her shoulder, a detail absent on the silver issues.

Croker was also likely responsible for many of the reverses used on Anne's coinage which - aside from the Farthing - feature variations on crowned cruciform shields of arms.

Isaac Newton: Master of the Mint

Throughout Queen Anne's reign, the position of Master of the Royal Mint was held by Sir Isaac Newton. The famed mathematician and physicist was first appointed Warden to the Mint in 1696 before taking on the top job in 1699 on the death of the incumbent.

Previous holders of the office had viewed the role as a nice source of income but Newton took the job seriously. He retired from his posts at Cambridge University in 1701 to focus more fully on prosecuting coin forgers and improving assaying techniques, bringing scientific precision to British currency. It's this reputation for accuracy, established by Newton in the reign of Queen Anne, that underlies the prestige of the Royal Mint more than three centuries later.

Newton served as Master of the Mint until his death in 1727, somehow finding time between staking out dodgy pubs, frequented by counterfeiters, to advance his work on optics and act as President of the Royal Society.

Not long after Croker and Newton completed work on Anne's coronation medals and first issue of coinage they were presented with a bounty of gold and silver, won at the Battle of Vigo Bay.

The battle was an early victory for the Grand Alliance in the War of the Spanish Succession which England became embroiled in, just weeks after Anne was crowned. In October of 1702, British Admiral, Sir George Rooke, was able to corner a Spanish treasure fleet, comprised of 56 vessels, at Vigo Bay in Galicia. Anglo-Dutch forces earned an alliance with Portugal from the battle as well as a lot of loot: 4504lbs 2oz of silver and a more modest 7lbs 8oz of gold.

Vigo Bay was a psychological win for the Grand Alliance and Anne and her government knew how to maximise its impact. In a royal warrant, the Queen instructed Newton:

'Our will & pleasure is & we do hereby require & authorise you to cause to be coyned all such Gold & Silver as shall be brought into our Mint and delivered unto you ... with this inscription Vigo in small letters under Our Effigies, which we intend as a mark of distinction from the rest of our Gold & silver moneys and to continue to posterity the remembrance of that glorious action.'

The word 'VIGO' appears below Anne's portrait on silver and gold coinage struck in late 1702 and early 1703. Many more VIGO coins were struck than could have been produced from the real Vigo booty, meaning the victory loomed larger than life in the public consciousness, then and now.

As well as the VIGO coins, Newton also asked Croker to design a medal, commemorating Vigo Bay. This would be one of 29 such medals that Croker would produce during Anne's reign. This prodigious output, not to mention his coinage work earned the medallist an excellent reputation, recognised by his appointment as Chief Engraver to the Tower Mint, following the death of Henry Harris in 1705.

Croker's Queen Anne medals, found in gold, silver and bronze pair unique, high-relief portraits of Anne with richly detailed reverse designs. He uses the Latin form to sign his name 'IC', usually on the drape of the Queen's dress.

Most of the medals celebrate successful military actions, including the Battle of Malplaquet (1709) and the Capture of Bouchain (1711), telling the story of these victories through allegorical scenes, birdseye views of armies and depictions of fortified towns. These fascinating propaganda pieces were also produced to mark domestic milestones like the Union of England and Scotland.

Coinage And The Acts Of Union

Though Anne became Queen of both England and Scotland (and Ireland too!) when she came to the throne in 1702, the two kingdoms had remained separate sovereign states with one monarch but different legislatures. Anne declared her intention to change this in her maiden speech to the English parliament and succeeded after years of hard negotiations. The Acts of Union took effect on 1 May 1701, uniting the the two nations into a single kingdom called Great Britain.

The union resulted in a change to the royal arms, combining two separate heraldic achievements into one that incorporated symbols associated with England, Scotland, Ireland and France (the latter being a formal but mostly meaningless part of her title). This royal arms update is reflected on the reverses of Anne's coinage which, from 1707 onwards, show the English and Scottish lions, divided per pale in the top and bottom shields. A Garter Star replaces the English rose in the centre.

You'll find an 'E' or 'E.' for Edinburgh below the bust on some post-union coinage of Queen Anne. This lettering can be seen on Crowns, Halfcrowns, Shillings and Sixpences, struck from silver brought down from Scotland to the London Mint in the June of 1707.

Between variants like this and the interwoven political, military and numismatic history of Anne's reign makes her coinage particularly interesting to collect.