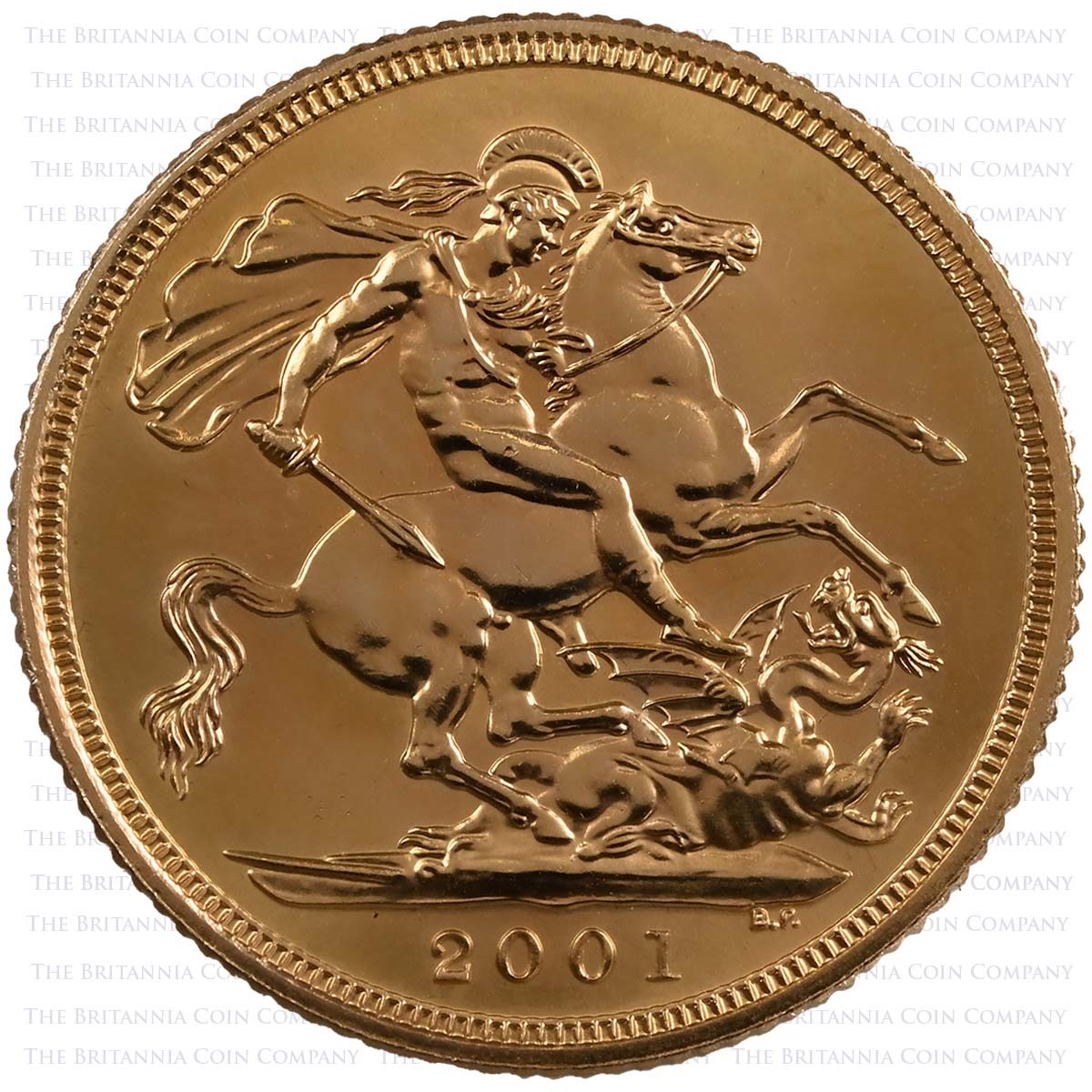 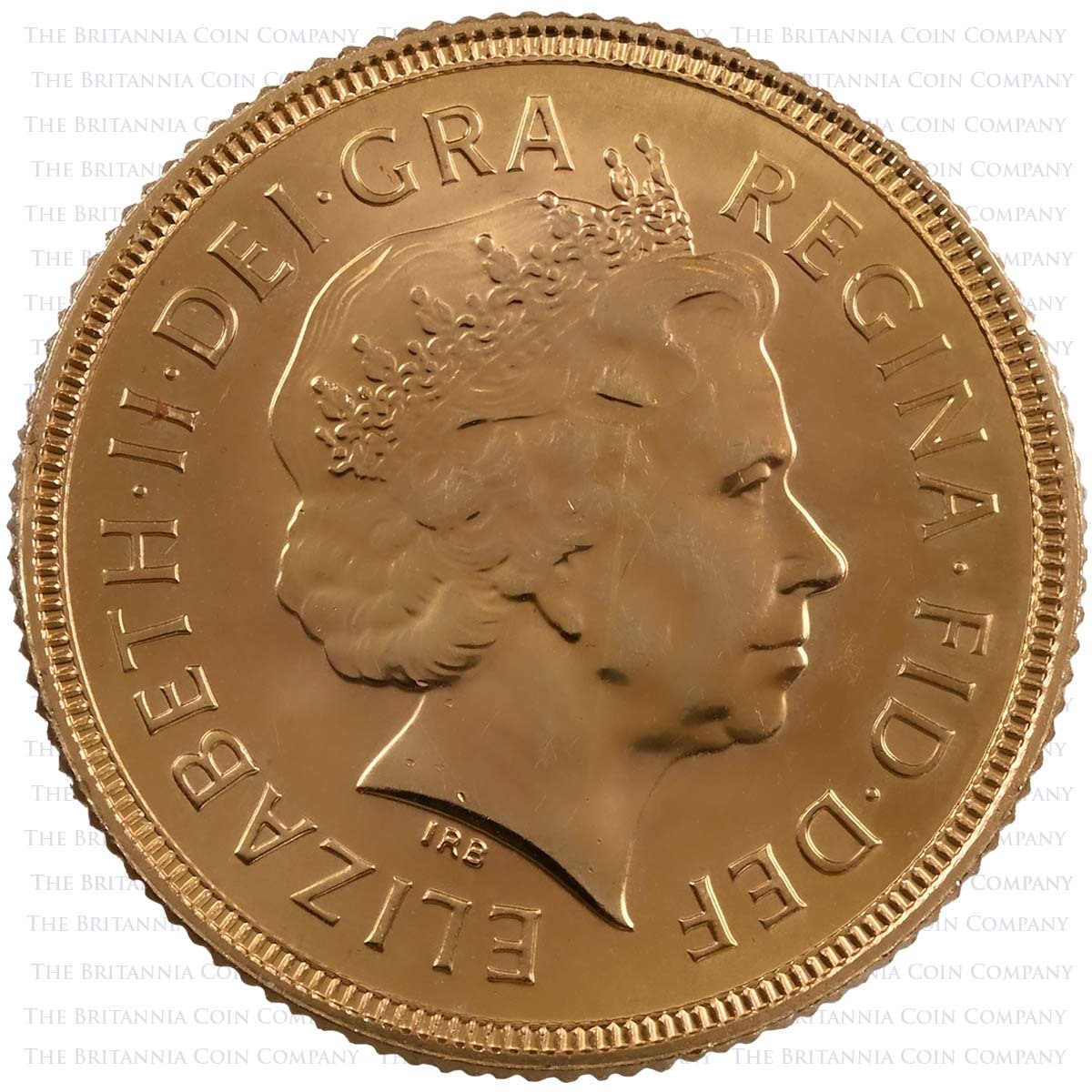 from
£450.00
(VAT Exempt)
The Royal Mint's 2001 gold bullion Sovereign. A high grade Bullion coin carefully selected by our team and graded at aEF (about Extremely Fine) or above. Extremely Fine or above coins have few signs of wear. This makes the coins a popular choice to mark the year of a special occasion such as a 20th wedding anniversary or birthday. Bullion coins are also sold at a lower cost than their Proof versions, making them more affordable too. The coin's Obverse hosts the 4th Portrait of HM The Queen, Elizabeth II, by Ian Rank-Broadley. The Reverse includes a return to the classic depiction of ‘St George and the dragon' by Benedetto Pistrucci. The Sovereign is exempt from VAT and Capital Gains Tax and our price is inclusive of fully insured UK shipping. Subject to stock availability.
Log in to get notified when this product is back in stock.
Track Product
You are not logged in. Please Login to track this product.
Description Summary Investment Info Specification About Sovereigns Royal Mint About us

The History Of Gold Sovereigns

Gold Sovereigns were first struck in England during the reign of King Henry VII. These large hammered coins are so-called because they featured a full-length image of the monarch on their obverse.

While the Tudors gave their Sovereigns to dignitaries, the modern milled coin of the same name, introduced in 1817, was intended for circulation. Those Georgian coins were the first to be issued with a face value of One Pound and were struck continuously by The Royal Mint for more than a century, both in London and at branch mints across the Empire. Production only tapered off with the dawn of the First World War.

The prestigious legacy lingered as the Sovereign became a popular bullion coin, sought-after by investors worldwide. The Royal Mint revived annual issues in the late 1950s with collectable proof coins and sets joining the roster in later decades, appealing to a global audience of eager buyers.

These Sovereigns are struck to The Royal Mint's bullion standard in 7.98 grams of 22-carat gold. That's 91.67% fineness. They measure 22.05 millimetres in diameter and have a milled edge that is 1.52 millimetres thick.

This specification has been followed to the letter since the first of these coins were struck. That means that historic Victorian 'full' Sovereigns have the same mass and gold content as Sovereigns struck today.

The Royal Mint tests their coinage at the Trial of the Pyx: an annual ceremony with medieval origins where thousands of coins are assayed to ensure they conform to the required dimensions and fineness. Sovereigns are part of the Trial which publicly confirms the quality of these gold coins.

2001 Sovereigns feature a reverse inspired by the legend of Saint George and the dragon. The story goes that the warrior saint once liberated a besieged village from the predation of a fearsome beast, rescuing a beautiful princess in the process.

This design - the work of an Italian artist named Benedetto Pistrucci - has been a perennial feature on these gold coins since they were first struck during the reign of George III. The saint had long been associated with the English monarchy and in choosing George for these prestigious new coins, Pistrucci and the Master of the Royal Mint, William Wellesley-Pole, honoured the King. The martial theme was an appropriate nod to recent British victory on the continent.

Two centuries on, Pistrucci's distinctive, neoclassical St George remains highly regarded by coin collectors. It's been modified a little over the years but retains its appeal. The date appears below the dragon.

The obverse of 2001 Sovereigns features one of the most widely reproduced portraits in the world. Ian Rank-Broadley's portrait of Queen Elizabeth II was used on all commemorative, circulating and investment coins issued by The Royal Mint between 1998 and 2015.

The fourth definitive effigy of Her Majesty replaced Raphael Maklouf's third portrait and shows Elizabeth II in her 70s. Rank-Broadley portrays her wearing Queen Mary's Girls Of Great Britain And Ireland Tiara which dates back to the 1890s and has been worn by The Queen regularly throughout her long reign. It's a classic design with enduring appeal.

The portrait fills the surface of this 2001 Sovereign and is surrounded by a legend that reads 'ELIZABETH · II · DEI · GRA REGINA · FID · DEF' with the artist's initials ('IRB') seen below the portrait.

Are 2001 Sovereigns A Good Investment?

There are two key tax benefits that make 'full' Sovereigns a special appeal to serious investors:

Other UK gold bullion coins like the gold Britannia offer similar benefits but the appeal of the Sovereign is distinct. Their long history means instant recognition for gold buyers and coin dealers the world over, making it easy to cash your Sovereigns in when needed. Classic designs appeal to numismatists and so too do the limited numbers issued every year.

In 2001 The Royal Mint struck just 49,462 gold bullion Sovereigns. Those looking to acquire a full set of these coins will want to scoop up this edition.

Sadly, counterfeit gold Sovereigns are fairly common so it's important to buy from a seller with the expertise to identify fakes. At The Britannia Coin Company, we've been buying and selling Sovereigns for more than a decade. Our team have the know-how to authenticate these coins and the high-end XRF technology to test the composition of each one that comes across our counter.

Our guaranteed authentic 2001 bullion Sovereigns are offered in About Extremely Fine (AEF) condition or better. These uncirculated coins, struck to The Royal Mint's bullion standard, show minimal signs of handling or wear and make great gifts. We also offer mixed-date bullion Sovereigns as part of our best value range: perfect for investors looking to add these gold coins to their stack.

Looking for a 2001 proof Sovereign? We've got those too, available in their original presentation box with a numbered certificate of authenticity.

Sovereigns are one of the easiest ways to buy gold coins with investment consisting of two pathways:

This 2001 Sovereign coin is struck to Bullion standard and has legal tender status with a nominal value of one pound sterling. The Royal Mint has produced the modern Sovereign coin since its origins in 1817. It was formerly a circulating coin that was accepted in the UK and around the world. The coin's Obverse presents the 4th Portrait of Her Majesty the Queen, Elizabeth II, by Ian Rank-Broadley. This effigy appeared on coins from 1998 until its replacement in 2015. Having reigned for nearly 70 years, Elizabeth II has had five Royal Portraits on coins produced since her accession to the throne in 1952. The Portraits were created by; Mary Gillick (1953-1967), Arnold Machin (1968-1984), Raphael Maklouf (1985-1997), Ian-Rank Broadley (1998-2014) and Jody Clark (2015-).

The 2001 Sovereign coin was created at The Royal Mint. The Mint, based at Llantrisant in Wales, is the official home of British coinage. With a history dating back to King Alfred the Great and producing currency for countries across the globe, it is considered one of the world's leading Mints. Its former home for over 500 years was the Tower of London, before the Mint was relocated to Wales following decimalisation in 1971. A gold Sovereign was the last coin struck in London in November 1975.

In 2001, The Royal Mint reported its first annual loss. It was believed this was largely due to a failed strategy in attaining 20% production of the new Euro coin, securing just 5% of all Euro production. Shortly after, the Mint diversified its product offering with a range of non-coin-related merchandise including; jewellery, commemorative plates and figurines.