22 carat gold Quarter Sovereigns were first issued by The Royal Mint in 2009. These fractional Sovereigns are a quarter of the weight of a 'full' Sovereign at just 1.997 grams. Quarter Sovereigns are available individually with a fine proof finish though more recently they have only been found in the larger annual Sovereign sets. These coins benefit from the same Capital Gains Tax and VAT exemptions as their larger counterparts but are generally more affordable thanks to their lower gold content. 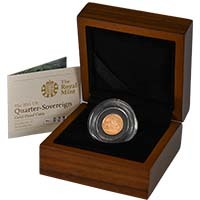 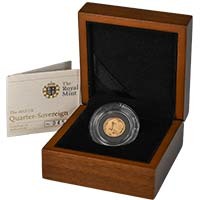 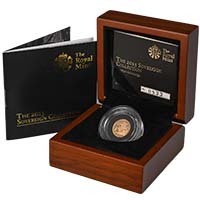 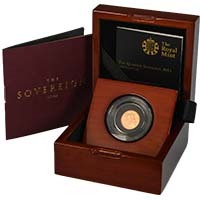 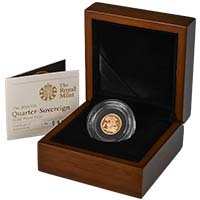 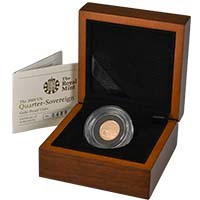 Introduced in 2009, these small gold Royal Mint coins are sought-after by collectors

What Are Quarter Sovereigns?

The design of Quarter Sovereigns mirrors other coins in the gold Sovereign family, scaled down for a smaller surface area.

Just two portraits have been used on the obverse of these coins. The first releases show Ian Rank-Broadley's effigy of Her Majesty the Queen which was replaced in 2015 with a new profile by Jody Clark. The legend remains the same: 'ELIZABETH · DEI · GRA · REGINA · FID · DEF'. An alternate portrait by James Butler was used in 2016.

For the most part, the reverse of Quarter Sovereigns has shown Benedetto Pistrucci's St George and the dragon motif, engraved all the way back in 1817. For some proof issues the reverse design has been varied, notably in 2012, 2017 and 2022 but tiny privy marks were also added in 2020 and 2021.

Since The Royal Mint has only been striking Quarter Sovereigns for a few years, the prospect of collecting a complete set might be seen as more manageable than other British gold coins. That said, Quarter Sovereigns, particularly ones issued in recent years, can be hard to find individually as they were originally offered in limited edition sets.

That said, because these fractional coins have a lower gold content than either Sovereigns or Half Sovereigns they are generally more affordable by comparison. Proof Quarter Sovereigns in their original, individual presentation packaging are prized, as are examples that have been graded by companies like NGC. Both of these types of Quarter Sovereigns command higher prices.

Uncirculated Quarter Sovereigns are a good option if you're in the market for small gold bullion coins but since they were only issued in a couple of years and in limited numbers they can be hard to find.

How To Sell A Gold Quarter Sovereign

The Britannia Coin Company buys gold Quarter Sovereigns for market leading prices. Got Sovereigns, old coins or collectible Royal Mint pieces you want to sell? Visit our Sell Your Coins today to find out how you can get cash for your Quarter Sovereigns from home. Request a free, no-obligation quote today and get paid fast.

The face value of Quarter Sovereigns is a quarter of a pound sterling or 25p but these tiny coins are worth much more than that thanks to their gold content. Each Quarter Sovereign is composed of 1.997 grams of 22 carat (916.7) gold which equates to .0588 troy ounces of pure precious metal.

Quarter Sovereigns are made from 22 carat gold. This is gold that is 91.67% pure. Copper is added to these gold coins to add strength as pure gold is fairly soft. Each Quarter Sovereign weighs 1.997 grams meaning that they contain .0588 troy ounces of pure gold: a quarter of that found in 'full' Sovereigns.

The face value of a Quarter Sovereign is a quarter of a pound sterling or 25p. However, their rarity and the gold content mean that Quarter Sovereigns are worth much more than this. These coins have only been offered for the last few years making them much scarcer than Half Sovereigns or 'full' Sovereigns.

In the 2010s, The Royal Mint offered some Quarter Sovereigns in individual presentations. Since 2020, however, the Quarter Sovereign has only been available in larger proof Sovereign sets making these coins difficult to find on their own unless they have been professionally graded.

Quarter Sovereigns weigh 1.997 grams and are composed of 22 carat (91.67%) gold. This means that their actual gold weight is 1.83 grams or 0.588 troy ounces, exactly a quarter of the gold in a 'full' Sovereign. These coins measure 13.50 millimetres in diameter and feature the same designs as larger Sovereigns.

Gold Quarter Sovereigns are only minted in limited numbers, their collectors value meaning they command prices well above their weight in gold. Individual proof examples are particularly sought after as they were only issued in certain years. Graded examples, taken from Sovereign sets, are also popular.

Gold Quarter Sovereigns are only minted in limited numbers, their collectors value meaning they command prices well above their weight in gold. Individual proof examples are particularly sought after as they were only issued in certain years. Graded examples, taken from Sovereign sets, are also popular.

Quarter Sovereigns are worth much more than the price of the gold they contain. These coins were only introduced in 2009 and have been offered in very limited numbers since, mostly with a proof finish. These coins are sought by collectors who enjoy the challenge of collecting a short but interesting series.