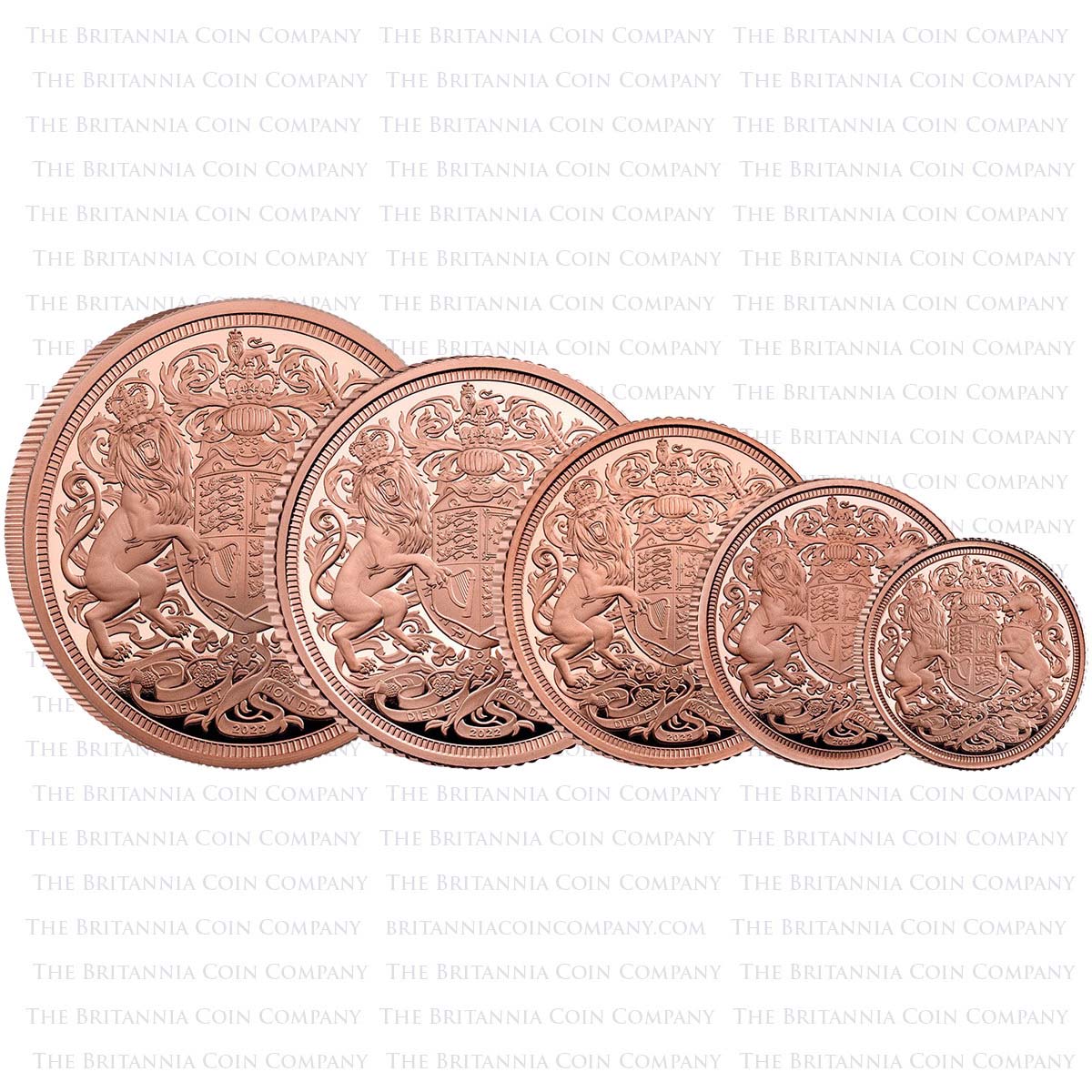 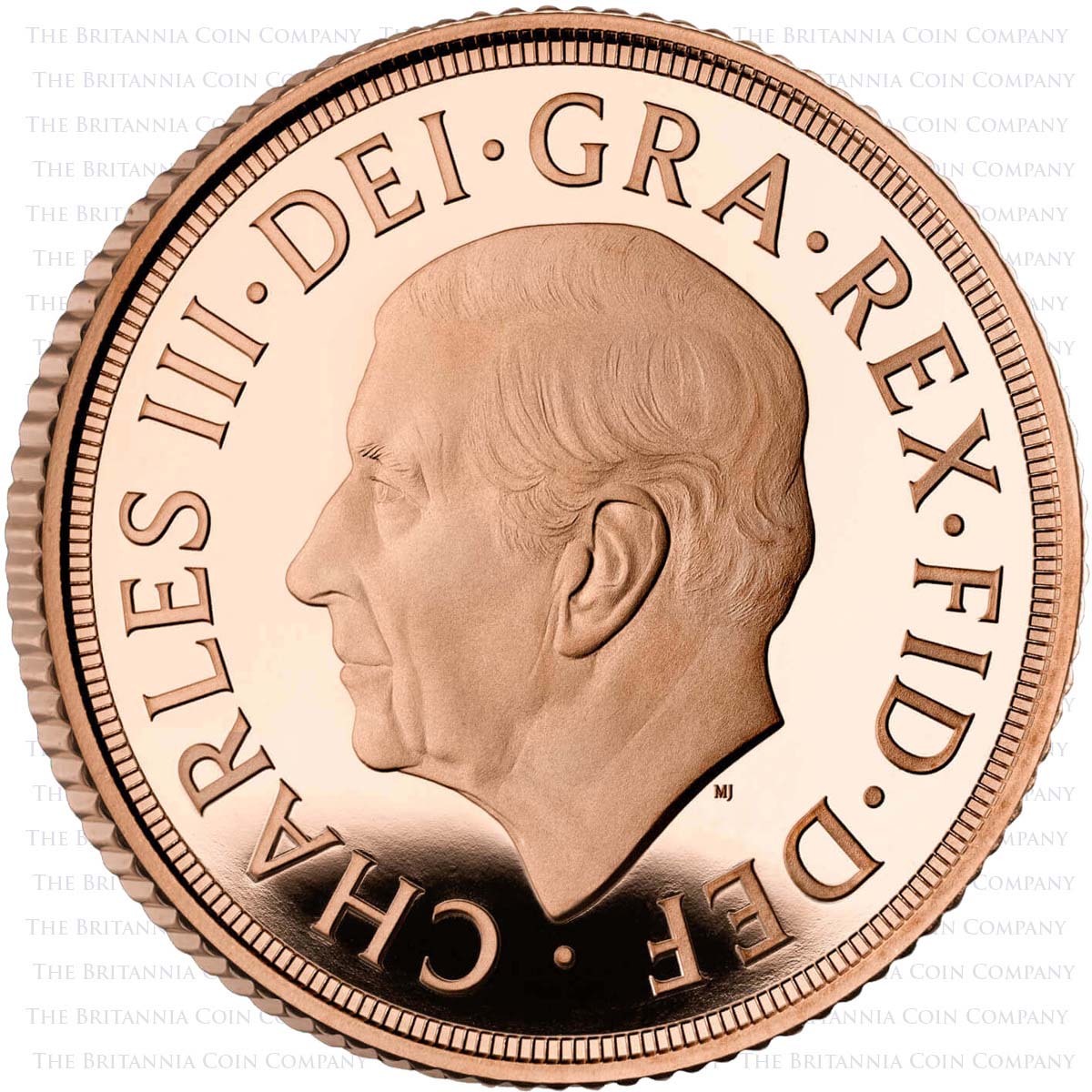 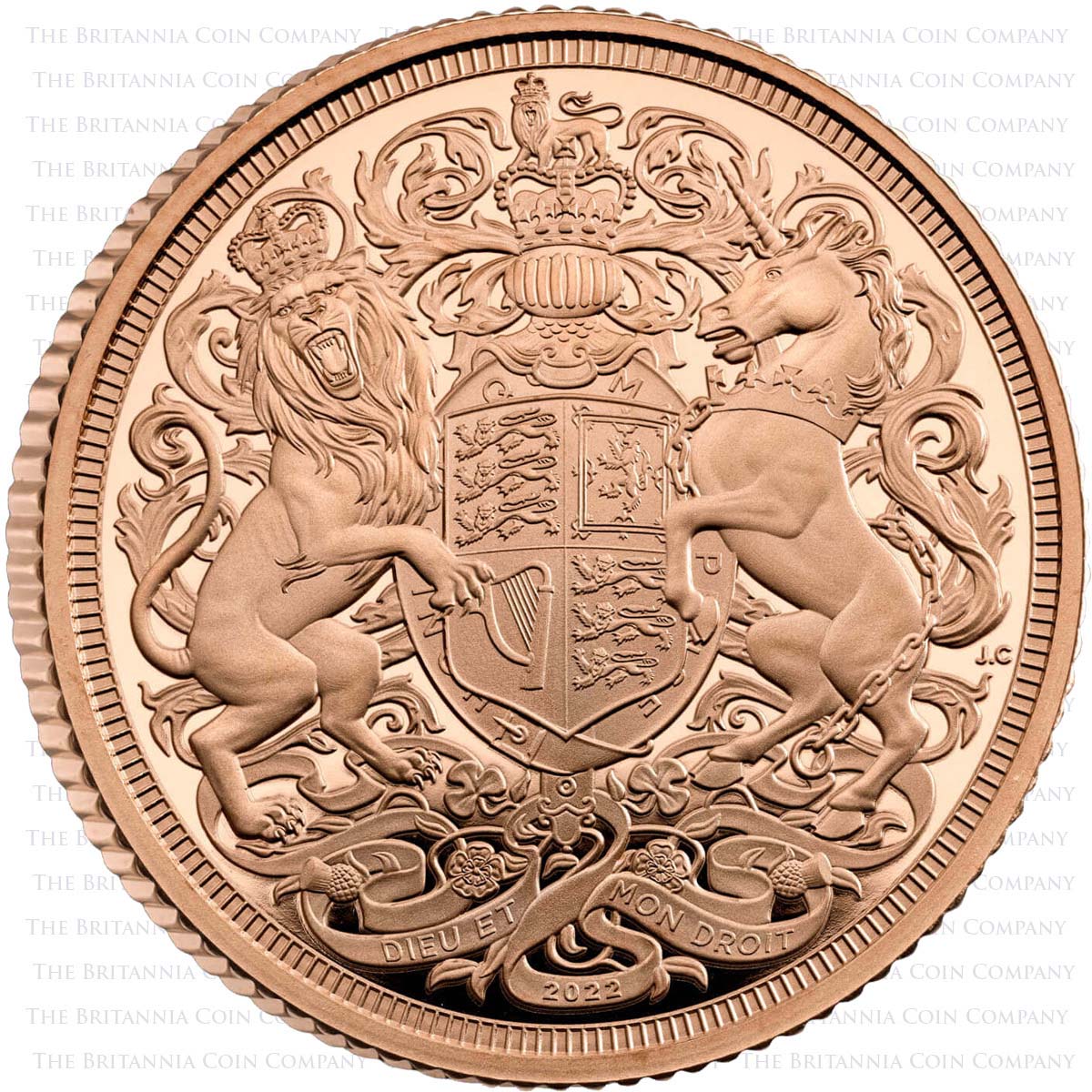 from
£6,495.00
(VAT Exempt)
Five-coin memorial 2022 proof Sovereign set from The Royal Mint: one of just 1,200 issued! This set contains a gold 2022 Five Sovereign, a Double Sovereign, a ‘full’ Sovereign, a Half Sovereign and a Quarter Sovereign, presented in their original display case with a numbered certificate of authenticity enclosed. These coins are among the first issued in the UK to feature Martin Jenning’s portrait of King Charles III. Charles ascended to the throne in September 2022, following the passing of his mother, Queen Elizabeth II. Jennings’ shows the new King facing left, the opposite direction to Elizabeth. As well as the new royal effigy, these coins are offered with a one-off reverse, commissioned specially by The Royal Mint as a tribute to the late Queen. This design - replacing the traditional image of St George and the dragon - is the work of Jody Clark, best as the designer of Her Majesty’s fifth and final coinage portrait. His creation shows the royal arms, supported by the lion of England and the unicorn of Scotland. It’s rich in detail: every spare millimetre of Clark’s intricate design is filled with flourishes and national flower emblems. While this memorial reverse is similar in theme to the Timothy Noad’s Platinum Jubilee Sovereign reverse its stylistically distinct, embodying the continuity and change brought by this new reign. Though they feature brand new designs to obverse and reverse, the technical specifications of these five coins conform to historic standards. Each is struck in 22-carat (916.7) gold making them a VAT free as well as CGT exempt as UK legal tender. A key addition to any serious Sovereign collection. Ships January 2023.
Quantity
Cost Per Unit
Starts From
1+
£6,495.00
£6,495.00
Track Product
You are not logged in. Please Login to track this product.
Description Summary Specification Royal Mint About us

Ordinarily, we'd only expect to see one issue of Sovereigns in a given year but with the passing of Elizabeth II and the accession of her son, King Charles III, in September, The Royal Mint has authorised an exceptional Memorial Sovereign to commemorate this historic moment

This poignant range is characterised by two remarkable new designs and is available in a range of sets, denominations and finishes.

Please note: The Royal Mint has advised that 2022 Memorial Sovereigns will be available for delivery from January 2023 onwards.

2022 Memorial Sovereigns are the first of these gold coins to feature a portrait of King Charles.

The new coinage portrait of the King was unveiled just weeks after he acceded to the throne. It's the work of British sculptor Martin Jennings who studied photographs of Charles before modelling his profile in plaster. Jennings' effigy shows Charles facing left, the opposite direction to his mother who looks right on her coins. The tradition for British monarchs to face a different direction to their predecessors dates back to the seventeenth century.

While Queen Elizabeth II was shown wearing a crown in four of her five definitive coinage portraits, Jennings' portrait of King Charles sports no glittering headgear or other symbols of his royal status. In this way the new coin portrait is similar to those of other male members of the House of Windsor. George V and George VI were both shown crownless on their money.

The reverse of 2022 Charles III Sovereigns shows the royal arms: a potent heraldic symbol, used both by the royal family and the British government. The arms speak to national history and identity and include symbolic representations of the four constituent countries of the United Kingdom: England, Scotland, Wales and Northern Ireland. They've also been a perennial presence on British coinage down the centuries with the royal arms currently used on all seven of the UK's circulating coins.

The interpretation of the royal arms seen on Memorial Sovereigns is the work of Jody Clark, best known for his fifth and final definitive portrait of Queen Elizabeth II. Clark's arms are dense with detail, surrounding the shield and supporters with flourishes and national flower emblems. His lion and unicorn are rendered with the realism that characterised the designs his Queen's Beasts series.

This design shares a theme with the special reverse commissioned for 2022 Platinum Jubilee Sovereigns. Timothy Noad's design is a clean-lined interpretation of the royal arms. Clark's work is stylistically different but presents a point of continuity in this time of royal transition.

You may also be interested in our collection of 2022 Jubilee Sovereigns, featuring a one-off reverse and a portrait of Queen Elizabeth II. You can also register your interest in 2023 Sovereigns via our product tracking system: hit the link for more information. 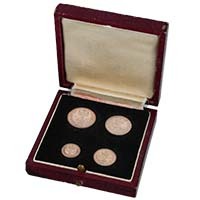