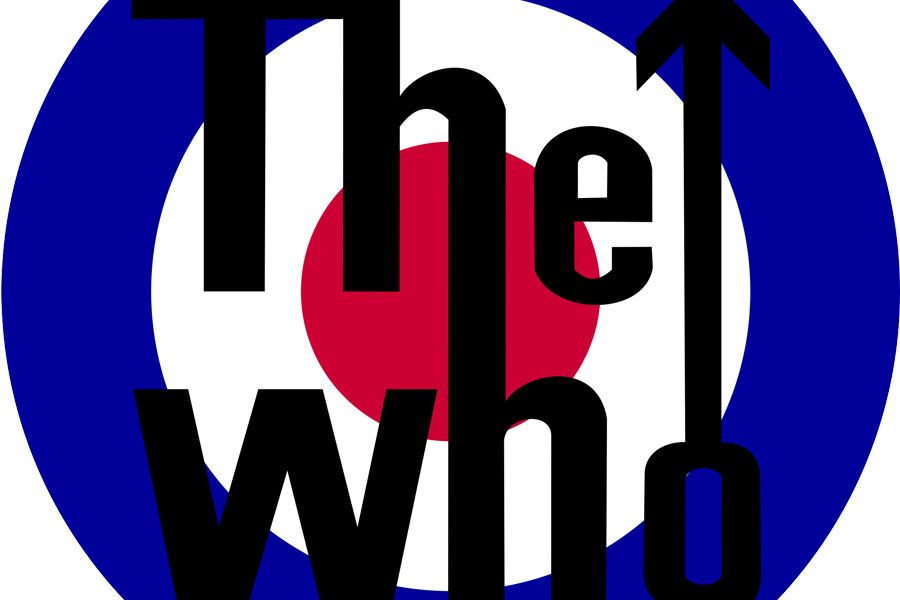 Any day now, The Royal Mint will share details of the next release in their groundbreaking Music Legends series. Here at The Britannia Coin Company we've been keeping our ear to the ground for any news of the next design and we're excited to share what we've found out.

It looks like the next Music Legends coins – minted like previous editions in gold proof, silver proof and cupronickel – will celebrate iconic English rock band, The Who.

Keep reading for an overview of the series so far and our guesses as to what the 2021 The Who Music Legends coins will look like.

As the name suggests, we're pretty proud of our island home at The Britannia Coin Company. That said, we're not biased when we claim that the UK is a breeding ground for the planet's best musicians. British artists have been dominating and transforming the world of popular music for decades and it's high time that extraordinary legacy was celebrated on coinage.

Luckily, The Royal Mint is busy with just that, launching their top-selling Music Legends series in early 2020 and keeping up a steady beat of releases since.

It's tough to pick the best British acts – it's a topic of much debate in the BCC office – but Music Legends aims to celebrate some of the greats. Three collections have been released so far, honouring the achievements of Queen, Elton John and David Bowie: all undisputed superstars.

Available in a range of metals, denominations and finishes, Music Legends coins have been great sellers for The Royal Mint, appealing to collectors, investors and fans alike. Previous designs have made clever nods to the long careers of the artists featured so we can't wait to see what the Mint will come up with the celebrate The Who.

When released, The Royal Mint's 2021 The Who coins will represent the fourth addition to the Music Legends series. Three different designs were released in 2020, celebrating three phenomenal acts: Queen, Elton John and David Bowie. Here's a quick recap.

Look carefully and you will see the opening notes of Bohemian Rhapsody – the band's best selling, chart topping single – depressed on the keyboard. 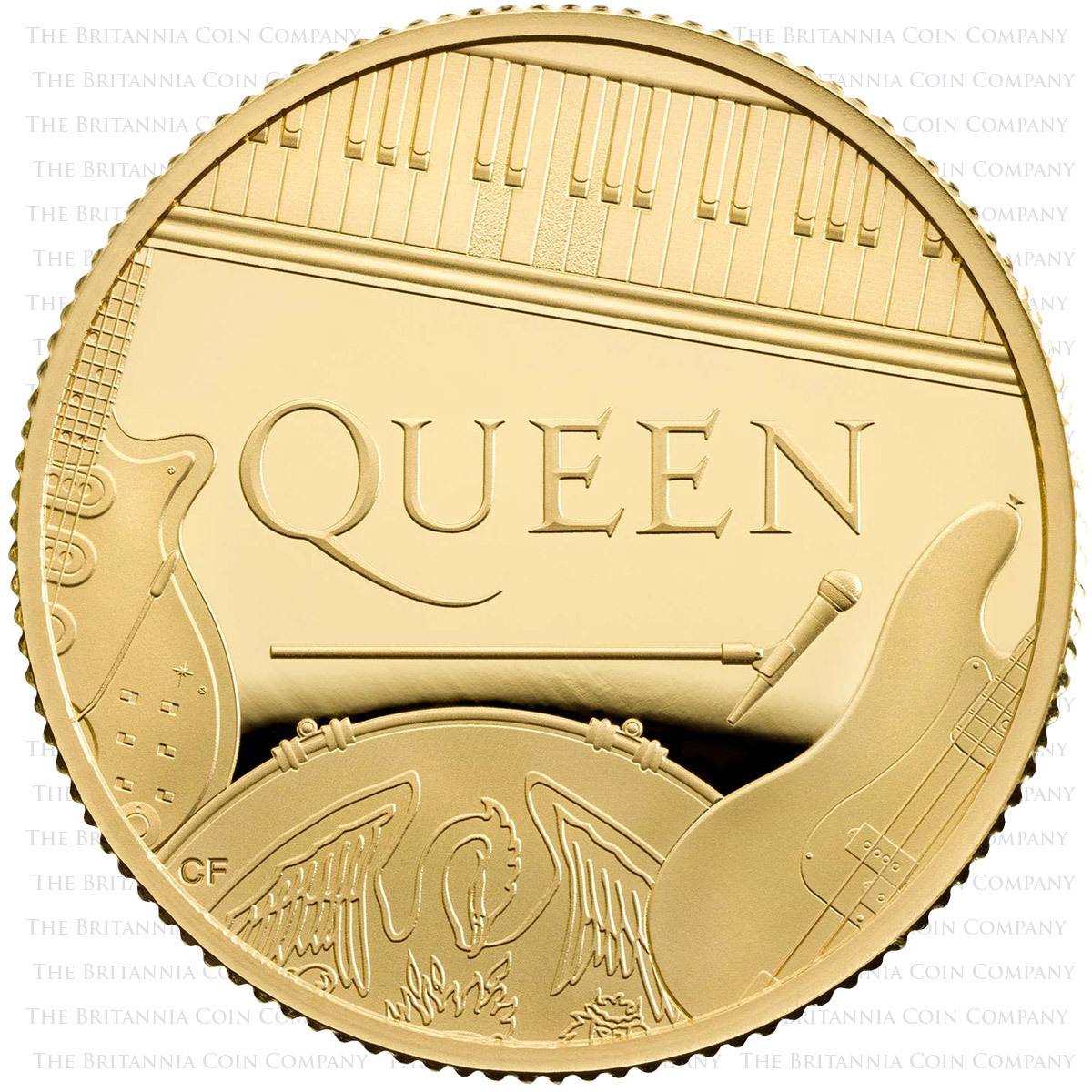 The second top British artist to have their legacy celebrated by the Royal Mint via their Music Legends series was Sir Elton John. One of the best-selling music artists of all time with more than fifty UK Top 40 hits, Elton John has collaborated on more than 30 albums with lyricist Bernie Taupin since 1967. 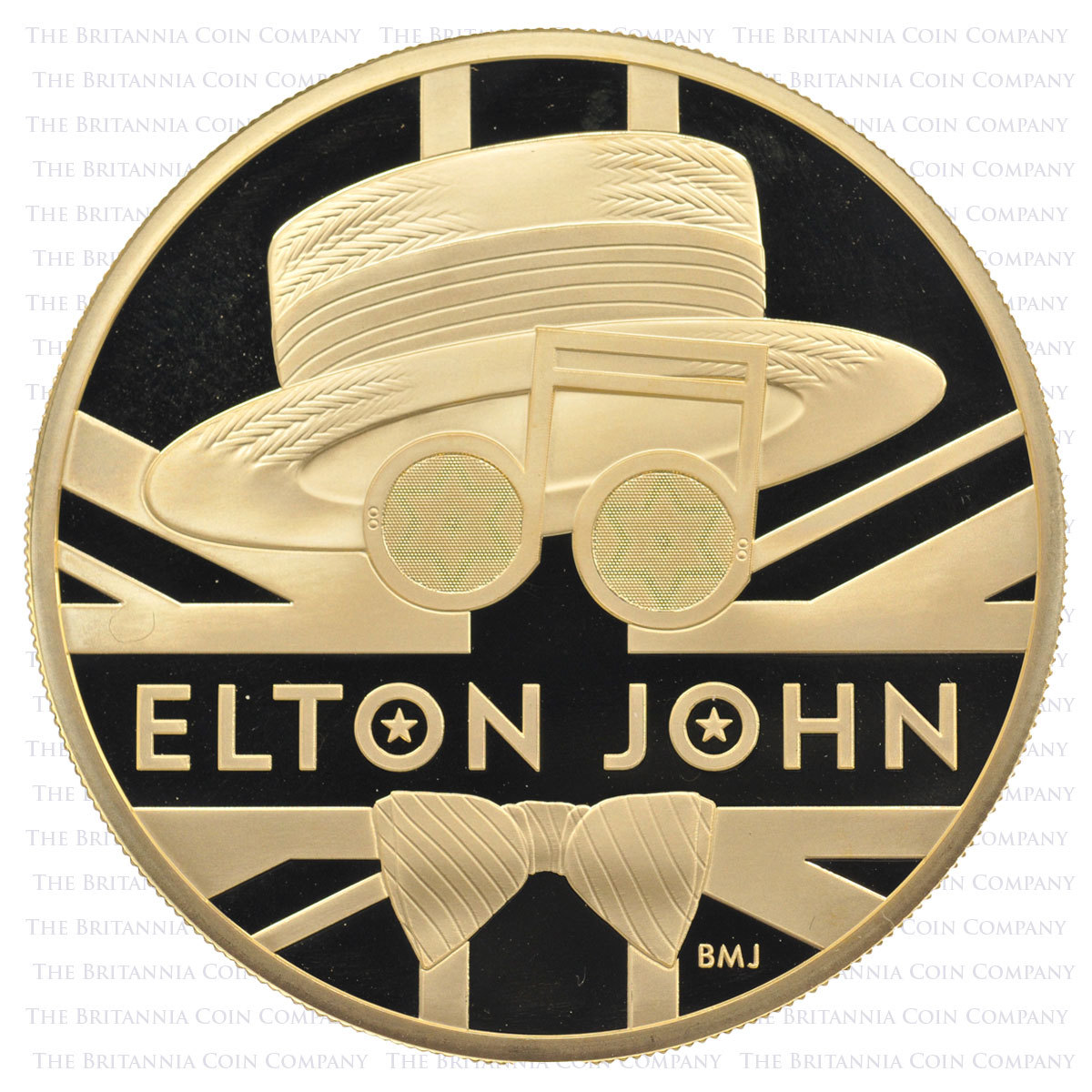 Ziggy Stardust himself headlined the last Music Legends release of 2020.

Creator of music genres and alter egos, centre of debates on sexuality and politics, and a highly intelligent entrepreneur, David Bowie more than deserves his place in the Rock and Roll and Songwriters Hall of Fame. Ever-eccentric, Bowie has inspired and enthralled since he released Space Oddity in 1969, gaining a new following with every reinvention. New fans continue to discover his music, years after his sad passing in 2016.

As Rolling Stone named him the 'Greatest Rock Star Ever' it was probably a given that Bowie would feature in The Royal Mint's series but we were still excited when the designs were revealed. 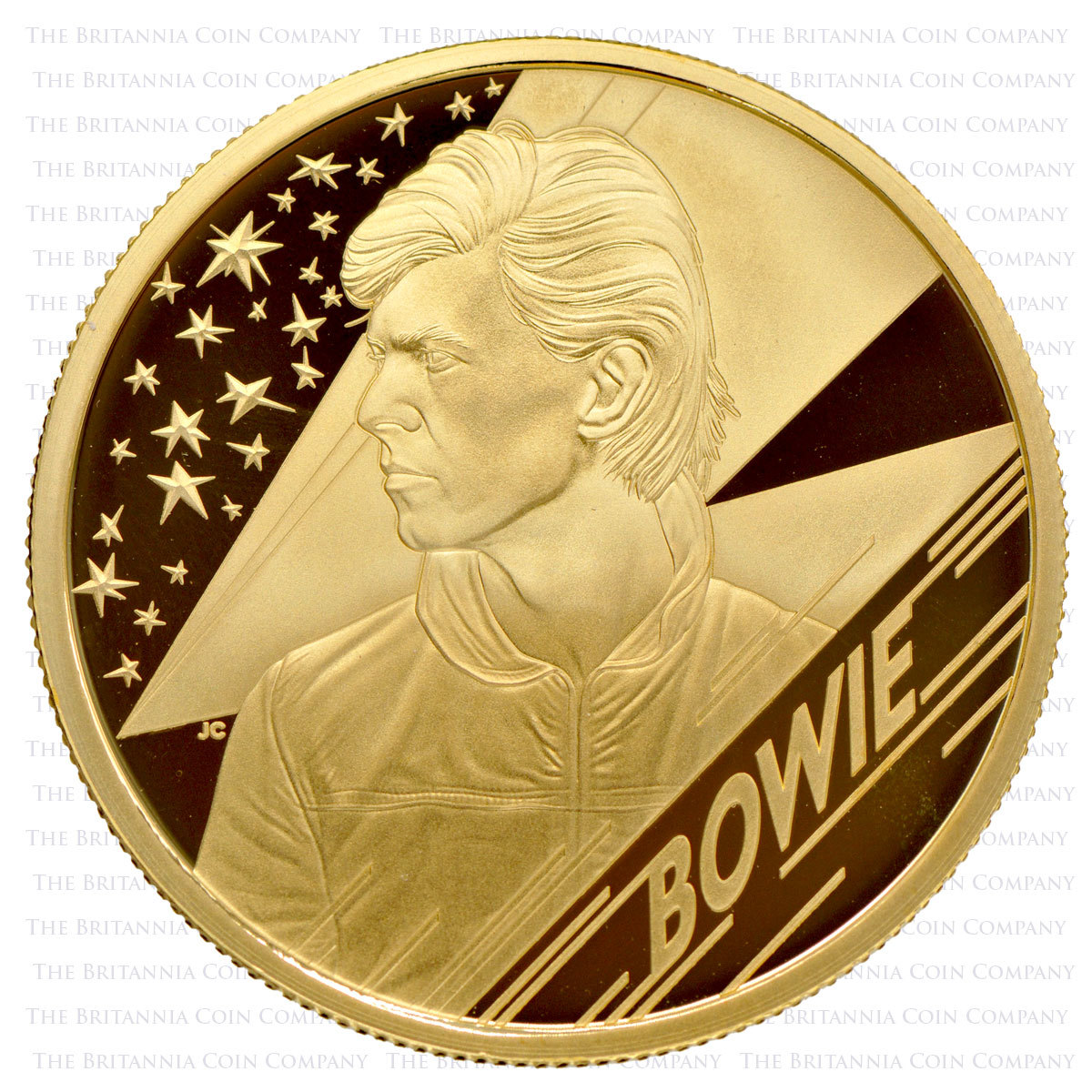 The design of Jody Clark's reverse, seen here on the David Bowie 2020 UK One Ounce Gold Proof Coin, was inspired by the singer’s time in Berlin, with the instantly recognisable lightning bolt a nod to his Aladdin Sane era.

While The Royal Mint hasn't made an official announcement yet, the recent Royal Proclamation confirms The Who is next in the Music Legends series.

Formed in London in the early 60s, The Who are cited as an inspiration by acts as diverse as Pink Floyd and Blur, never mind selling more than 100 million records in their own right. They settled on their classic line up in 1964: Roger Daltry as lead vocalist, Keith Moon on drums, John Entwhistle on bass and Pete Townshend tackling lead guitar and song writing. The band soon gained a fanatical following for a string of hit singles like My Generation and Baba O’Riley as well as a distinctive pop art inspired image.

Rock afficionados will tell you that The Who in their heyday were the best live band on earth and we are inclined to agree. Their 1970 Live at Leeds album is hailed by many as the best live album ever made. Their electric stage presence and creative – sometimes destructive – performance techniques were matched with Townshend’s phenomenal compositional skills. It’s his unconventional musical storytelling that powers two pioneering and highly acclaimed rock operas – Tommy (released 1969) and Quadrophenia (1973).

Despite the deaths of Moon and Entwistle, the remaining members of The Who have continued to perform live and release new music, most recently the album WHO in 2019.

Straddling genres and styles with ease, The Who shaped punk, metal, power pop and progressive rock while staying at the top of their game for more than five decades. If The Royal Mint is celebrating the best of British music in their Music Legends series, then The Who are an indisputably good choice.

We know that the obverse of The Who 2021 will bear the inscription '· ELIZABETH II · D · G · REG · F · D ·' alongside the denomination. The portrait will, of course, be the current coinage effigy of Her Majesty, crafted by Jody Clark.

What we don't know yet is what the reverse design will look like.

The Royal Proclamation, published in The London Gazette in April 2021, gives us some clues. Announcements like this tell us the specifications of coins the Royal Mint plans to release but they are quite careful to provide only a brief description.

Based on the reference to a pinball machine we have to assume that the reverse design will be inspired by The Who's 1969 single, Pinball Wizard. Reference to an alternate edge inscription reading 'PINBALL WIZARD' on The Who 2021 UK Two Ounce Silver Proof Coin heightens our suspicions.

Pinball Wizard featured on the band's fourth studio album Tommy. Hailed by critics as The Who's breakthrough, the rock opera was mostly written by guitarist Pete Townshend. The song is written from the perspective of a pinball champion who is impressed by the skills of the album's main character, the deaf and blind Tommy Walker.

'He ain't got no distractions / Can't hear those buzzers and bells / Don't see lights a flashin' / Plays by sense of smell / Always gets a replay / Never seen him fall / That deaf dumb and blind kid/ Sure plays a mean pin ball.'

Though Townshend didn't rate Pinball Wizard, the song became a fan favourite, thanks to its pop sound. It's among The Who's most famous live pieces, played at almost all of the band's concerts since its debut performance in May 1969.

The track has also been covered by a number of other artists, most famously, Elton John for the 1975 film adaption of Tommy. Elton John was the subject of the second collection in the Music Legends series.

The Who performing Pinball Wizard live at the Isle of Wight Festival in 1970: one of the most memorable shows of their career.

The Royal Proclamation gives us detailed specifications for each of the coins that will be released but does not provide us with the anticipated mintage: the number that will be produced.

The range of weights that will be offered mirrors previous releases in the Music Legends series. For the heaviest One Kilogram Gold Proof coins, earlier mintage numbers have been in the single digits so it’s likely that this will be the same for The Who 2021 UK One Kilogram Gold Proof Coin. Other coins in the collection, particularly the gold proof pieces, will likely be issued in small numbers too.

These five coins will all be minted to the finest proof standard and composed of gold with a fineness above 999, equivalent to 24-carats. The design for these coins will be the same, scaled to the appropriate size.

The Royal Mint will issue four silver proof The Who 2021 coins – a Five Ounce, a Two Ounce, a One Ounce and a Half-Ounce – all minted to proof standard in 999 fineness Ag.

These silver proof The Who 2021 coins will likely be available in a range of presentation options. This could include the unusual acrylic block display used for Half-Ounce coins in the earlier Queen, Elton John and Bowie collections.

Silver proof Music Legends coins have typically been available in larger numbers than their gold proof counterparts, but the number of each denomination released has decreased with each collection. We would not be surprised if the mintage for silver proof The Who 2021 coins was lowered again.

As with previous coins in the Music Legends series, the as-yet unreleased design will also be available on £5 cupronickel Brilliant Uncirculated coins, sold in several, collectible, limited-edition slipcases.

The Who 2021 UK Brilliant Uncirculated Coins will undoubtedly make great, affordable presents for the rock fans in your life.

The Royal Mint have not yet shared an official release date for 2021 The Who Music Legends coins but they have definitely kick started their marketing campaign.

Based on previous releases we can anticipate The Who coins becoming available in a matter of weeks.

To stay ahead of the curve, we recommend signing up to our newsletter. We’ll let you know as soon as we have stock. Scroll down to the bottom of this page and enter your email address now to join our mailing list.

Britannia on British Coins: Roman Goddess to Symbol of Empire 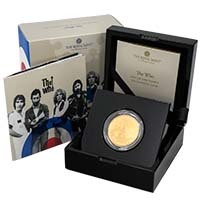 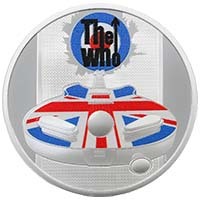 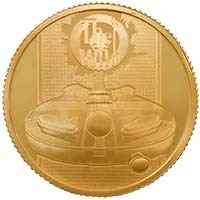