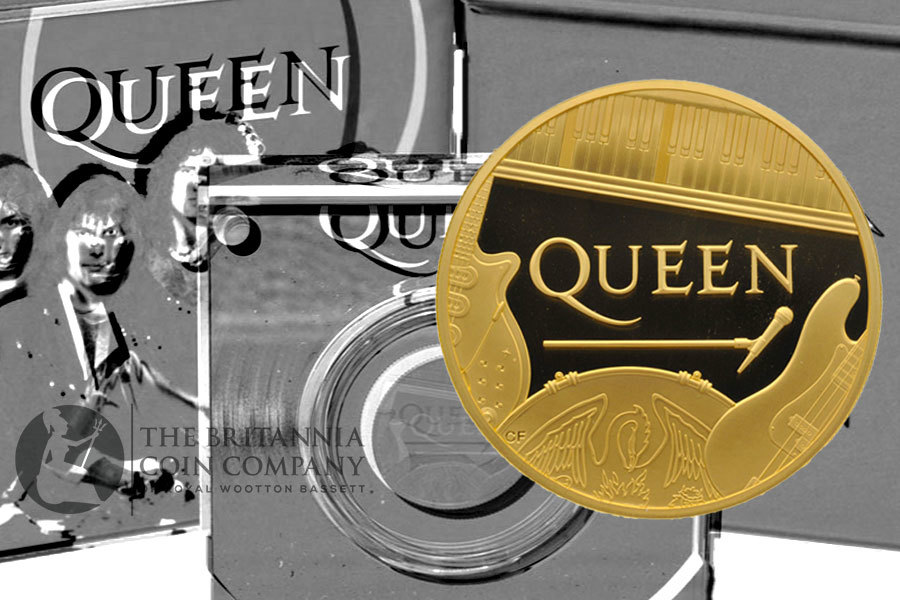 "Stomp, stomp, clap. Stomp, stomp, clap," the unmistakable sound conjures images of a blazingly yellow military jacket, large teeth and the distinctive moustache that is legendary frontman, Freddie Mercury. We Will Rock You is one of rock band Queen's most memorable hits, an acapella track, which is the namesake of the band's jukebox musical, often accompanied by We Are The Champions. Both songs became best-selling singles for the band alongside a host of chart-toppers they wrote together over the years such as; Another One Bites The Dust, I Want To Break Free, Killer Queen, Somebody To Love and many more. As The Royal Mint's inaugural design for its new Music Legends collection, there is no band more fitting than Queen to lead the series and become the first band on an official UK coin.

Champions of the world: Queen's contribution to British music

Since the 1970s, Queen have performed to some of the largest and most interesting audiences in the world. In 1981, they set a world record for the biggest paying audience at 250,000 people in Rio de Janeiro. The band performed at Live Aid in 1985, which is regarded as their best ever performance with a sad link to lead singer Freddy Mercury's death from AIDS. Thanks to their heartstopping performance at Live Aid, they were a hard act to follow for musician David Bowie, who was next in the night's line-up. Other notable concerts include their free Hyde Park concert played to 200,000 fans and the A Day at the Races Tour performance at Stafford's Bingley Hall, which inspired the audience participation element of We Will Rock You, after the audience started chanting for an encore.

Who was frontman Freddy Mercury?

Freddie Mercury, formerly known as Farrokh Bulsara, is one of the UK's most famous immigrants. Born in Zanzibar and raised in India, Mercury's family fled violence and persecution in Zanzibar, arriving in London in the 1960s. This is where Mercury later found fame in Queen with band members; guitarist Brian May, bassist John Deacon, and drummer Roger Taylor. Queen Elizabeth II, sadly never crossed paths with the late great Freddie Mercury but now they are immortalised together in precious metals in the first of a special limited edition coin series from The Royal Mint celebrating Music Legends.

1976 was the year that changed the face of British music forever. It was the year that A Night At The Opera was born. Queen's co-written platinum album gave us rock opera single, Bohemian Rhapsody, widely considered a masterpiece and one of the greatest songs of all time. Playing for a dramatic 5 minutes and 55 seconds, it was deemed too long for mainstream radio stations but that didn't stop it topping the charts for nine weeks on its release or becoming the namesake of Queen's 2018 biographic film. Neither Freddie Mercury, nor any member of Queen, has given any indication as to the meaning behind the song's bizarre lyrics.

This first instalment of The Royal Mint's Music Legends series captures the essence of one of the greatest bands in history. The reverse is the first ever coin design by Chris Facey. In the design, each of the four band members are represented by a partial image of their instruments, playing homage to the band's ability to push the boundaries of music. Alongside Taylor's drums and Deacon's bass guitar is Brian May's "Red Special" self-made guitar, which he still plays with a sixpence, producing its unique sound. The opening four notes of Bohemian Rhapsody are also pressed down on Mercury's piano keys at the top of the coin, which incidentally is the first Queen song designer Facey ever encountered, while watching the movie, Wayne's World. The coin's obverse features a different kind of queen in the Portrait of Her Majesty the Queen, Elizabeth II, by Jody Clark.

What coins are available in the series?

The Queen collection is available in Gold Proof, Silver Proof and Brilliant Uncirculated coins. The Gold Proof coins are available in a one or five ounce size. The Silver Proof coins come in one, two, five or half ounce sizes. Gold and Silver Proof coins are presented in a special "Queen Live" coin cover. The Brilliant Uncirculated coins arrive in a choice of slipcase covers exclusive to The Royal Mint - from album art to photography of live performances. Collectors can choose from the following covers; Queen Live, A Kind Of Magic or Hot Space. Don't stop reading now! Take a look at our FAQs and make a purchase of this unique collection, giving your collection a rockstar edge.