The History of the Maria Theresa Thaler Silver Coin 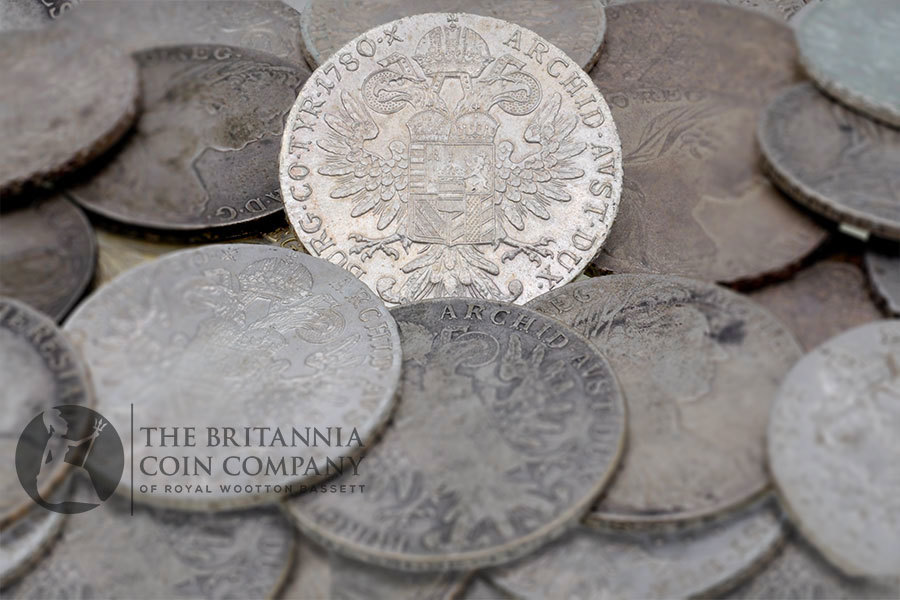 Maria Theresa, a name that’s now well known throughout the world of numismatics, was born in 1717. The only female ruler in the House of Habsburg, she became the Archduchess of Austria and the Queen of Hungary and Bohemia at the age of 23.

A woman that boasted a mixture of power and beauty, Maria was painted often and it's her profile that adorns the Maria Theresa thaler. When she died in 1780, however, she likely had no idea that her coin would be struck for many, many years to come.

The Maria Theresa Thaler was originally issued in Austria between 1740 and 1780, the years that Maria ruled over the country, and was the currency of the Austrian Empire. But the coin became widely used for trade and its creation and influence has since travelled much further than the bounds of its homeland.

The thaler was one of a select few European coins that was known and respected across much of Africa, which is why, 50 years after Maria’s death, the Maria Theresa thaler became a central part of Mussolini’s plan of attack on Abyssinia (now known as Ethiopia).

In 1935, Mussolini, prime minister of Italy at the time, decided to invade Abyssinia. He believed that if he had enough Maria Theresa thalers, he could build an economic relationship with Abyssinia once invaded.

With the nod from Hitler that Italy was allowed to produce the coin for itself and Austria would limit its own production, Mussolini started to put his plan into action. It didn’t end particularly well for him, however, as Abyssinia put up a good fight and refused to be conquered. In 1938, he withdrew the circulation of the thaler from Abyssinia.

Due to Mussolini’s efforts, Italy now held a monopoly on the coin. Many other countries weren’t too happy about the situation and decided to act.

The Continuing Demand for Thalers

In retaliation, the Royal Mint in London and the Paris Mint resorted to producing their own Maria Theresa thalers in 1936, followed by Brussels in 1937, each without asking Austria’s permission. Even during World War II, with the German blockade of British ports, production continued as London sent its dies to Bombay. This time saw a huge level of production of Maria Theresa Thalers:

In 1947, London’s dies, which had been returned from Bombay, were put back to work as the orders for Maria Theresa thalers came back in. Over 6 million were struck over the next two years. Britain had lost India as a colony, meaning the obverse needed to be redesigned to remove ‘IND EMP’ (Emperor of India) from King George VI’s title. The Royal Mint in London found itself unable to keep up with demand, so the dies were sent to the Birmingham Mint to produce for the year.

Millions were issued from Birmingham, and even more from London, where striking continued until 1961. Brussels also produced another 11 million before they stopped issuing the coin in 1957.

This infamous thaler is arguably one of the most beautiful coins ever produced and well worth adding to your collection. But you might notice that not all Maria Theresa thalers are the same.

Despite the fact that most of these coins are identical, some aren’t. Namely, those struck in London and Brussels from dies made before the war.

In Brussels, the engraver that produced the dies missed out one of the nine pearls on Maria Theresa’s brooch. It might be an interesting discrepancy to us today, but it was rather an issue at the time. Ten million were made and each was greeted with disapproval from many – it's thought that the Arabs of Yemen were so used to the design of the thaler that they'd reject the coin if they couldn't feel each of the nine pearls with their thumb.

London saw a similar hiccup too. Its dies missed out the central feather of the Imperial Eagle that featured on the coin's reverse. Seeing as London's dies had also been used for the thalers struck in both Birmingham and Bombay, these coins also bear the mistake.

Luckily, the British dies were recut in 1953, but it's still possible to pick out these coins. The letters of the inscription of 'IVSTITIA ET CLEMENTIA' that features on all thaler coins are thicker and the word 'IVSTITIA' is 3mm shorter than usual.

A Thaler contains 23.4g of pure silver. Coins struck before 1780 will have a numismatic value and must be valued as such. Most Thalers dated 1781 are nowhere near as old as they seem, as all newly struck coins bear this date. Contact us if you're selling Maria Theresa Thalers.

The Thaler has been minted continuously since 1741. Following the death of Empress Maria Theresa in 1780, all coins subsequently struck carry this date. The Austrian mint still strike the Thaler and is purchased as a bullion investment coin It's also used as an unnoficial currency in areas of Africa and Asia.

The Empress Maria Theresa was ruler of Austria, Hungary and Bohemia between 1740 and 1780. She was born in 1717 and died in 1780. The Thaler is a silver bullion coin, named after her.