from
£125.00
Silver proof one ounce George I coin from The Royal Mint’s British Monarchs series. This new series celebrates the Kings and Queens of the British Isles and the fascinating coinage issued during their reign. Starting in 2022, each new release features a historic royal portrait, remastered for modern money by The Royal Mint’s design team. Their 3D modelling process preserves the imperfections of rare old coins and places them alongside a modern effigy of our current Queen, Elizabeth II. The third collection in the British Monarchs series stars the first of the Hanoverians, George I. He was King of Great Britain and Ireland from 1714 until 1727. His coinage featured a right-facing portrait by German-born artist John Croker that shows George wearing a laurel wreath, tied at the back of his neck. The portrait and original lettering is reproduced on this one ounce 2022 silver coin. From a limited edition of 1,350, this modern George I coin is composed of 31.21 grams of 999 fine silver. It has a face value of £2 / Two Pounds and a diameter of 38.61 millimetres. You’ll receive your British Monarchs coin in its original Royal Mint presentation packaging with a numbered certificate of authenticity and an information booklet enclosed.
Quantity
Cost Per Unit
Starts From
1+
£125.00
£125.00
Track Product
You are not logged in. Please Login to track this product.
Description Summary Specification Royal Mint About us

Celebrate coinage history with this silver proof 1oz 2022 George I coin from the British Monarchs collection.

What Is The British Monarchs Series?

Billed as a five-year series, the British Monarchs collection will feature 21 Kings and Queens, starting with Tudor dynasty. The series kicked off with a collection featuring King Henry VII in early 2022. Three further releases are slated for this year including coins starring James I, George I and Edward VII: all the first monarchs of their respective houses. The British Monarchs series is projected to run until 2026.

George I: The First Hanoverian King Of Britain

The third coin in the British Monarchs collection stars King George I who was King of Great Britain and Ireland from 1714 until 1727. He inherited the throne from his second cousin, Queen Anne, becoming the first British monarch of the House of Hanover and kicking off what we call the 'Georgian period'.

The portrait of George I that appears on this British Monarchs coin is the work of the German-born engraver, John Croker. He came to England during the time of William and Mary and also designed the coinage of Queen Anne and George's successor, his son, George II.

Croker's portrait of the elder George has been remastered for the British Monarchs series by the Royal Mint's design team using 3D scans and modelling techniques to preserve some of the character of the original including the slight irregularities present in historic milled coinage.

The Royal Mint has reproduced their portrait of George I across a range of coins in a variety of sizes including limited edition 5oz, 2oz and 1oz gold coins as well as a variety of silver pieces, 1oz and 2oz editions included.

All these collectible pieces come in presentation boxes with a numbered certificate of authenticity enclosed. Mintage figures vary with the gold and large silver pieces being among the most limited.

We'll supply your 2022 George I British Monarchs coin in its original presentation packaging from The Royal Mint which includes a detailed information booklet and a numbered certificate of authenticity.

Got a George I coin or another British Monarchs piece you would like to sell? The Britannia Coin Company offers free, no-obligation quotes for old and modern coinage. Visit our Sell Your Coins page for more information: we're confident you'll be satisfied with our prices. 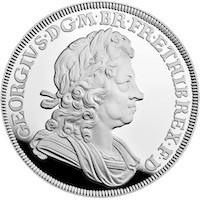 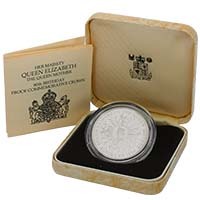 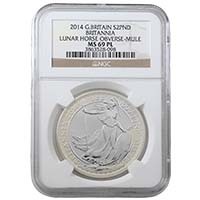