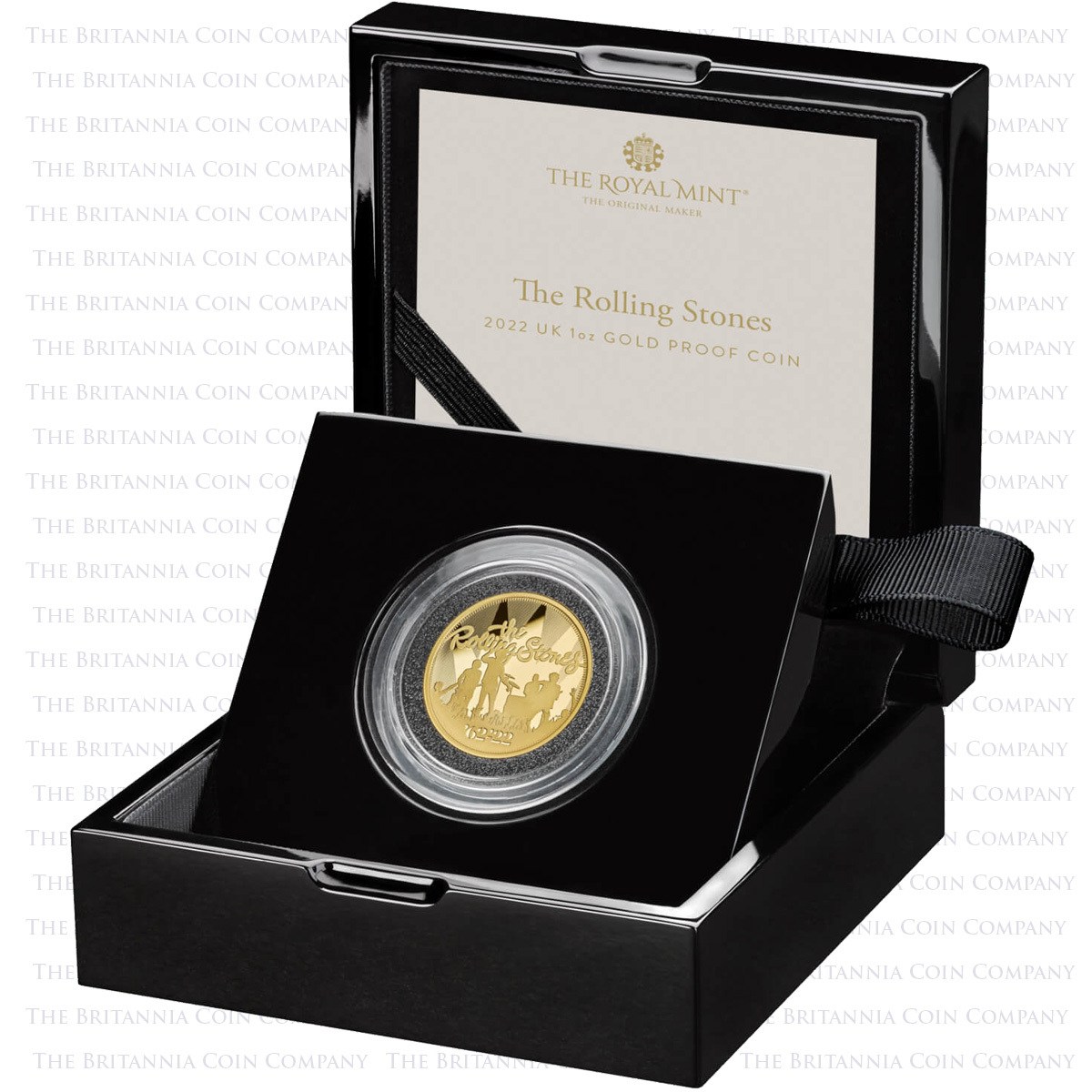 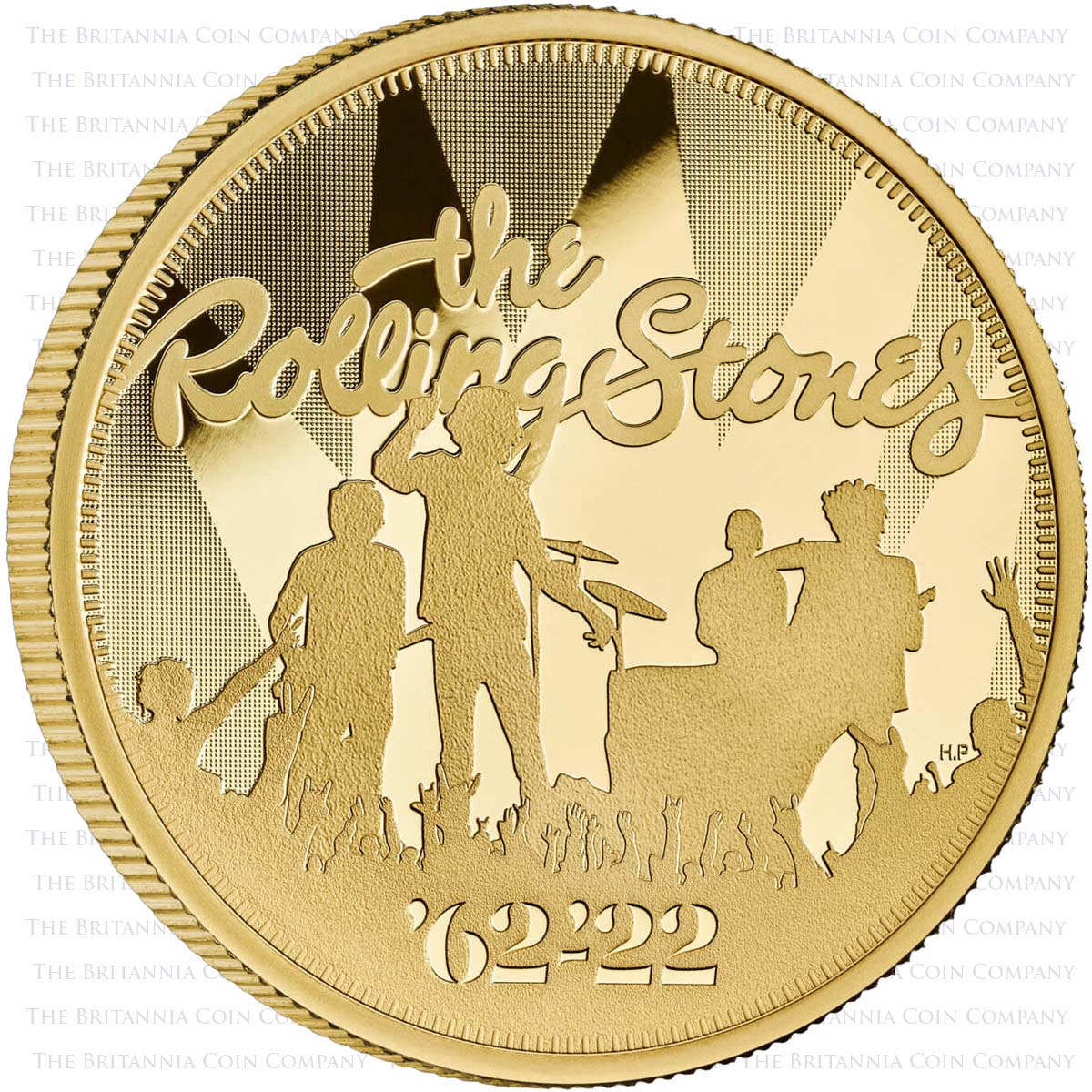 from
£2,725.00
(VAT Exempt)
Limited edition 24-carat gold officially licensed Rolling Stones coin: one of just 350 issued worldwide. 2022 marks the 60th anniversary of the iconic rock 'n' roll band and The Royal Mint are celebrating in style with this new addition in their Music Legends series. The Stones formed in London in 1962, arriving on stage amid the rebellious counterculture of the 1960s, their signature, rhythmically driven sound, rooted in blues, came to define hard rock. Six decades on the band are among the best-selling music artists of all time and are still selling out global stadium tours. The band's line up has changed over the years, with Mick Jagger and Keith Richards the only founding members still rocking. This limited edition collectible shows a silhouetted four-piece, mid-set to a cheering crowd, illuminated by bright spotlights. The design is the work of Hannah Phizacklea and features the classic 70s Rolling Stones font. The fifth release in The Royal Mint's Music Legends series, this is the first time that the band has appeared on an official UK coin. The 'heads' side shows a portrait of Queen Elizabeth II, making these some of the last coins issued with her image, following her passing in September 2022. Just 350 of these licensed collectibles have been struck by The Royal Mint. They're made of more than 30 grams of solid 999.9 gold and come in a bespoke presentation box with a numbered certificate of authenticity. An incredible gift for any fan of 'The Greatest Rock 'n' Roll Band In The World'.
Log in to get notified when this product is back in stock.
Track Product
You are not logged in. Please Login to track this product.
Description Summary Specification Royal Mint About us

Design by Hannah Phizacklea. Band performing to a crowd with spotlights. 'The Rolling Stones' above and anniversary dates below.

From a limited edition presentation of just 350 coins of this size issued by The Royal Mint. Offered in original presentation case with information booklet and numbered certificate of authenticity enclosed.

What Is The Royal Mint's Music Legends?

UK-born recording artists have been dominating and transforming the world of popular music for decades, gaining a legendary status and devoted fans. It's tough to pick the best British acts – it's a topic of much debate in the BCC office – but The Royal Mint's Music Legends series provides a whistle-stop tour of the greats, celebrated on officially licensed legal tender UK coinage.

The Mint pressed play on Music Legends in 2020 with a collection featuring rock band Queen and continued a steady beat of releases through the year with a range of Elton John coinage followed by a David Bowie drop. The Who became the fourth release in the series in 2021 and we've been eagerly anticipating the next issue ever since.

The Greatest Rock Band In The World

The fifth release in the Music Legends series is dedicated to The Rolling Stones, struck to coincide with their sixtieth anniversary.

The Stones were formed in London in 1962, quickly becoming known for a hard rock sound, influenced by the blues, that still sells out stadiums today. Among the best-selling musical artists of all time, the band racked up a string of hit albums and singles that topped the UK charts. The legendary line-up has changed a bit over the years but original members, Mick Jagger, Keith Richards and Ronnie Wood are still touring. Speaking about the new coin range the band said:

'We are delighted to be honoured by way of an official UK coin. Even more significant that the release coincides with our 60th anniversary'.

Hannah Phizacklea is the designer behind the reverse of these new commemorative coins.

Phizacklea studied at the University of Lincoln and was invited to submit a design for this collection. This is her first creation to be featured on official UK coinage. Her design is influenced by her Dad's love of rock 'n' roll and the blues as well watching videos of the band playing live. It shows the classic four-part line up, silhouetted by spotlights, performing to a crowd. Phizacklea has incorporated various textures for a multi-layered design.

'The Rolling Stones' appears above in the classic 1973 font, picked out with red colour printing on some editions of this coin. The anniversary dates - '62-'22 - appear below.

Coins in the 2022 Rolling Stones collection are among the last collectible UK coins to be issued with a portrait of the late Queen Elizabeth II. Her Majesty passed away in September and was succeeded by her son, King Charles III.

Her fifth and final official UK coin portrait by Jody Clark - seen on the obverse of these Music Legends coins - will be replaced on forthcoming Royal Mint coins with the new bust of His Majesty by Martin Jennings.

All of the precious metal coins in the range are available in strictly limited numbers with only 30 of the largest five ounce gold coin offered to collectors.

We've got a range of Rolling Stones coins in stock for a limited time, including:

We'll supply your Music Legends coins in mint condition, sealed in their original capsule inside an attractive, glossy-black display case with a detailed information booklet and a numbered certificate of authenticity enclosed. 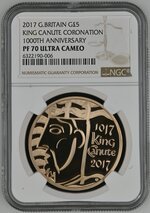