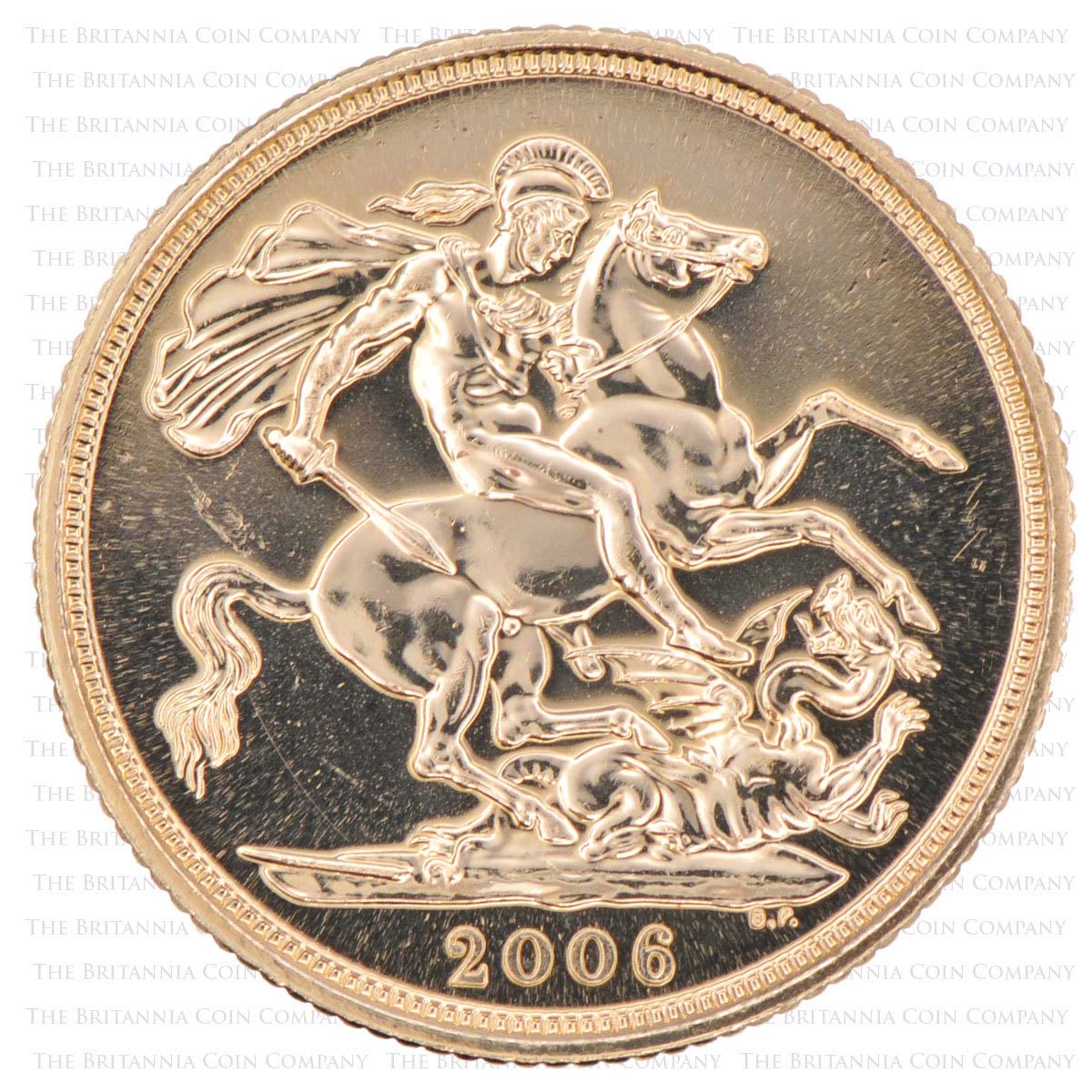 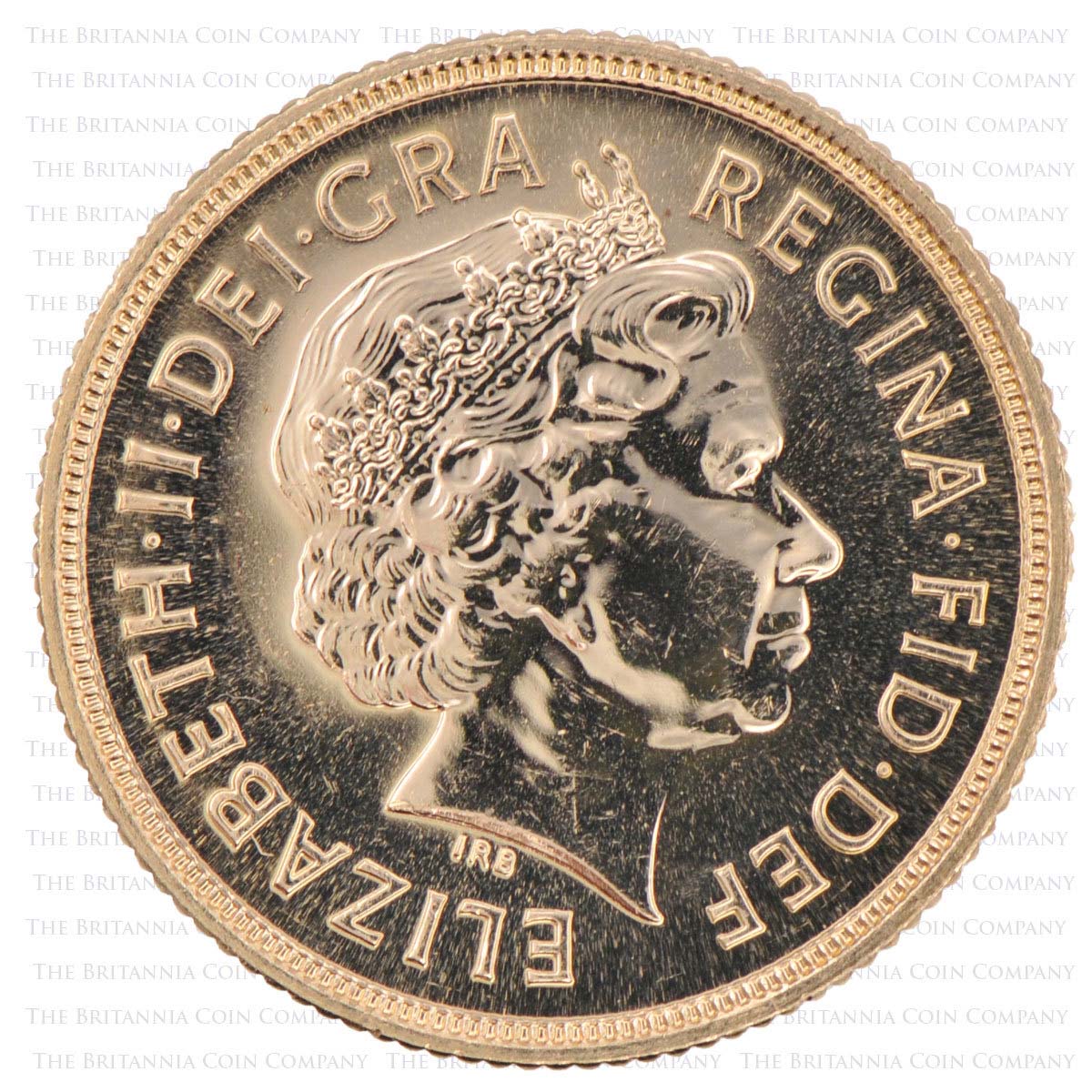 from
£392.86
(VAT Exempt)
Produced at The Royal Mint, the 2006 gold bullion Sovereign is a high grade Bullion coin. Carefully selected by our team and graded at aEF (about Extremely Fine) or above. Coins graded Extremely Fine or above have minimal signs of wear, making them an affordable and popular choice when purchasing dated coins to mark a special occasion such as a 15th birthday or Crystal wedding anniversary. These Bullion coins are also more cost effective than their Proof versions. The coin's Obverse hosts the 4th Portrait of HM The Queen, Elizabeth II, by Ian Rank-Broadley. The Reverse includes the signature 'St George and the Dragon' Sovereign coin design by Benedetto Pistrucci. The Sovereign is exempt from VAT and Capital Gains Tax and our price is inclusive of fully insured UK shipping. Subject to stock availability.
Quantity
Cost Per Unit
Starts From
1+
£392.86
£392.86
Track Product
You are not logged in. Please Login to track this product.
Description Summary Investment Info Specification About Sovereigns Royal Mint About us

Gold Sovereigns are issued annually by The Royal Mint, eagerly sought by a host of collectors and investors, keen to acquire these iconic British coins.

Fans of the Sovereign appreciate their gold content as well as their long history which stretches back to the time of the Tudor Kings.

The first Sovereigns were struck during the reign of King Henry VII, the large hammered gold coins were presented to dignitaries as a show of wealth and prestige. The modern Sovereign is redolent with this glamorous legacy. The coin was reintroduced in 1817 in the aftermath of the Napoleonic Wars and quickly gained a global reputation, struck by The Royal Mint and circulating across the British Empire. Sovereigns fell out of circulation in the early twentieth century but the market for new editions and historic examples remains strong.

The Royal Mint's 'full' bullion Sovereigns are made from 7.98 grams of fine, 22-carat gold. They're composed of 91.67% pure gold with copper added for strength and durability. This gives these coins their distinctive reddish tone.

This specification has remained the same since 1817, meaning that Victorian Sovereigns are the same size and contain exactly the same amount of gold as investment Sovereigns struck today. While the designs have varied over the years each of these coins measures 22.05 millimetres in diameter and feature a milled edge that is 1.52 millimetres thick. There are very few world coins that can claim such a long history of consistent production.

The reverse of these 2006 coins dates back to the reign of King George III.

When the first modern Sovereigns were introduced, the then Master of The Royal Mint, William Wellesley-Pole (the elder brother of the Duke of Wellington) sought a unique design, distinct from coinage then in circulation.

Wellesley-Pole choose an Italian artist for the task. Newly arrived in London, Benedetto Pistrucci was a talented gem engraver with a firey temper. He learnt the art of die engraving to create this image of St George on horseback, slaying a dragon in an evocation of the saint's primary legend. Though adapted a little over the years, Pistrucci's neoclassical design has become a regular feature on the Sovereign down the centuries, instantly recognisable to those interested in numismatics.

Ian Rank-Broadley's portrait of Queen Elizabeth II features on the obverse of 2006 Sovereigns.

The British sculptor (born 1952) trained at the Slade School of Art and the British School at Rome before returning to the UK to start his professional career, specialising in works in low relief. Rank-Broadley won a private competition to design a new effigy of Her Majesty in 1997 with the portrait introduced to circulating, commemorative and investment coinage the following year. The fourth definitive effigy of Elizabeth II shows her facing right and wearing Queen Mary's Girls Of Great Britain and Ireland Tiara. Rank-Broadley portrays The Queen in her seventies, marking a significant update from Raphael Maklouf's very flattering 1985 portrait.

The legend around reads: 'ELIZABETH · II · DEI · GRA REGINA · FID · DEF' with the artist's initials seen below the portrait.

2006 bullion Sovereigns come with a range of benefits that make them appealing to investors.

These coins have a nominal face value of One Pound (£1) Sterling. As UK legal tender they are exempt from Capital Gains Tax meaning you pay no tax on your profit when it comes time to sell. However, the true value of 'full' Sovereigns is tied to their precious metal content and, as investment-grade gold, you'll find that these coins are exempt from VAT meaning we can offer them at a better price than bullion products made from silver, platinum or palladium.

You'll find that gold buyers and coin dealers recognise the value of gold Sovereigns instantly. These coins have a global reputation for purity and desirability and have a place in many investment portfolios as well as serious coin collections. Those interested in numismatics are drawn by the attractive designs and the Sovereign's long history.

Collectors also value the limited-edition status of 2006 'full' Sovereigns. Just 33,012 were struck by The Royal Mint so these coins command a significant premium over other bullion.

All investment Sovereigns offered by The Britannia Coin Company have been carefully authenticated by our expert team. We use specialist XRF technology as well as our decades of experience to ensure you get a genuine British Sovereign. Don't believe us? Just check our eKomi reviews.

These coins are graded About Extremely Fine (AEF) or better, indicating an uncirculated bullion coin with very limited signs of wear or handling. The Royal Mint's bullion coins are designed for investors but also have a place in many serious coin collections.

Interested in 2006 'full' Sovereigns? You might want to take a look at our 2006 proof Sovereigns. These coins feature a fine, highly-detailed finish and come in an attractive presentation box. Just looking to invest in gold? Check out our best value bullion Sovereigns, available in our choice of date.

Sovereigns, like this 2006 gold bullion Sovereign, are one of the easiest ways to invest in gold coins with investment consisting of two routes:

This Sovereign coin is struck to Bullion standard and has legal tender status with a nominal value of one pound sterling. The modern Sovereign coin has been struck since 1817. It was originally a circulating coin that was accepted in the UK and around the world. The coin's Obverse presents the 4th Portrait of Her Majesty the Queen, Elizabeth II, by Ian Rank-Broadley. This effigy appeared on coins from 1998 until its replacement in 2015. Having reigned for nearly 70 years, Elizabeth II has had five Royal Portraits on coins produced since her accession to the throne in 1952. The Portraits were created by; Mary Gillick (1953-1967), Arnold Machin (1968-1984), Raphael Maklouf (1985-1997), Ian-Rank Broadley (1998-2014) and Jody Clark (2015-).

The 2006 Sovereign coin was created at The Royal Mint. The Mint, based at Llantrisant in Wales, is the official home of British coinage. With a history dating back to King Alfred the Great and producing currency for countries across the globe, it is considered one of the world's leading Mints. Its former home for over 500 years was the Tower of London, before the Mint was relocated to Wales following decimalisation in 1971. A gold Sovereign was the last coin struck in London in November 1975.

The Britannia Coin Company handles an array of rare, commemorative and investment coins. These coins include gold, silver and other precious metal modern coins to ancient, hammered issues from across the globe. Royal Wootton Bassett was awarded Royal status by Her Majesty the Queen, Elizabeth II, in March 2011, for how its residents publicly paid their respects to fallen soldiers in the Iraq and Afghanistan wars. It is the first town to be awarded such an honour for over 100 years.