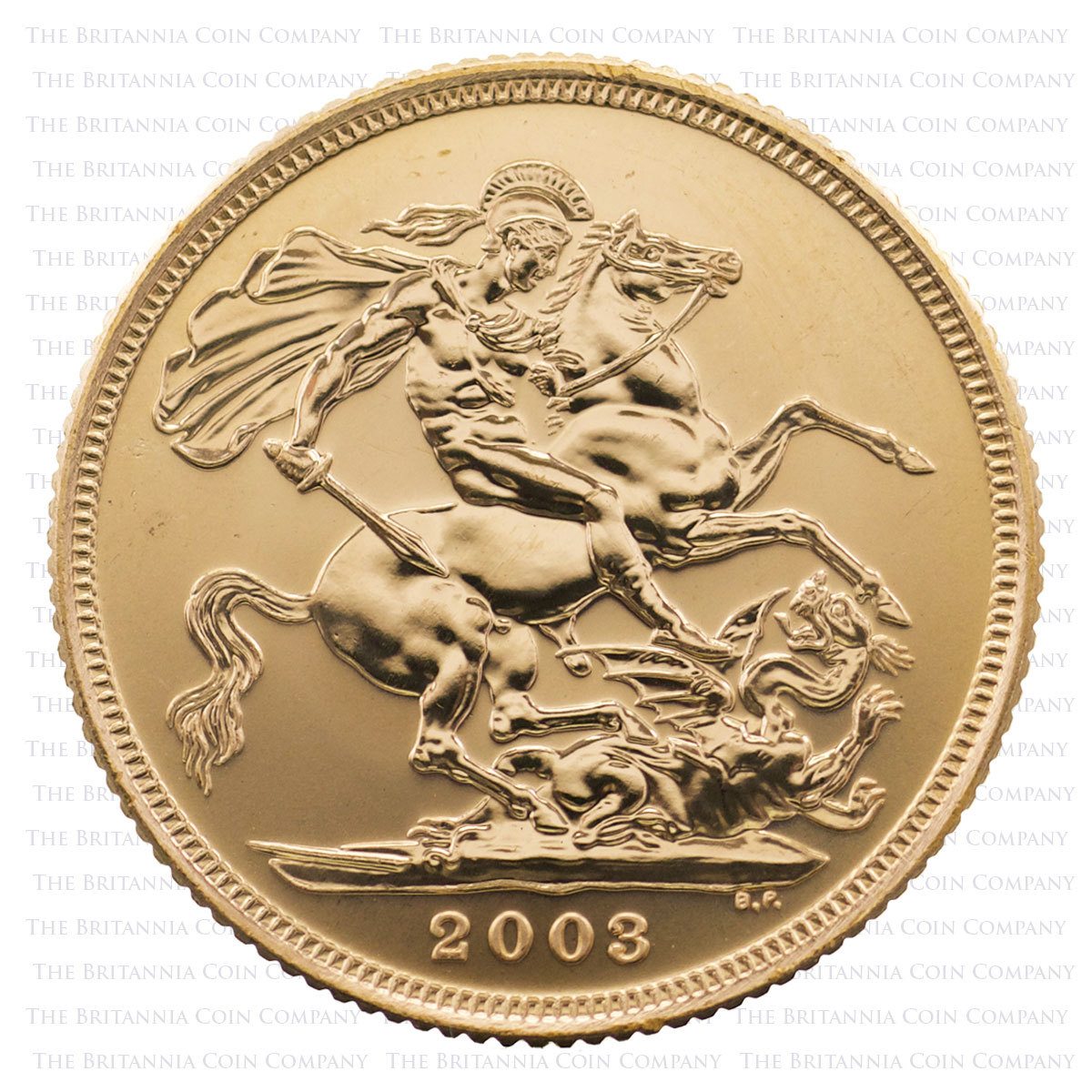 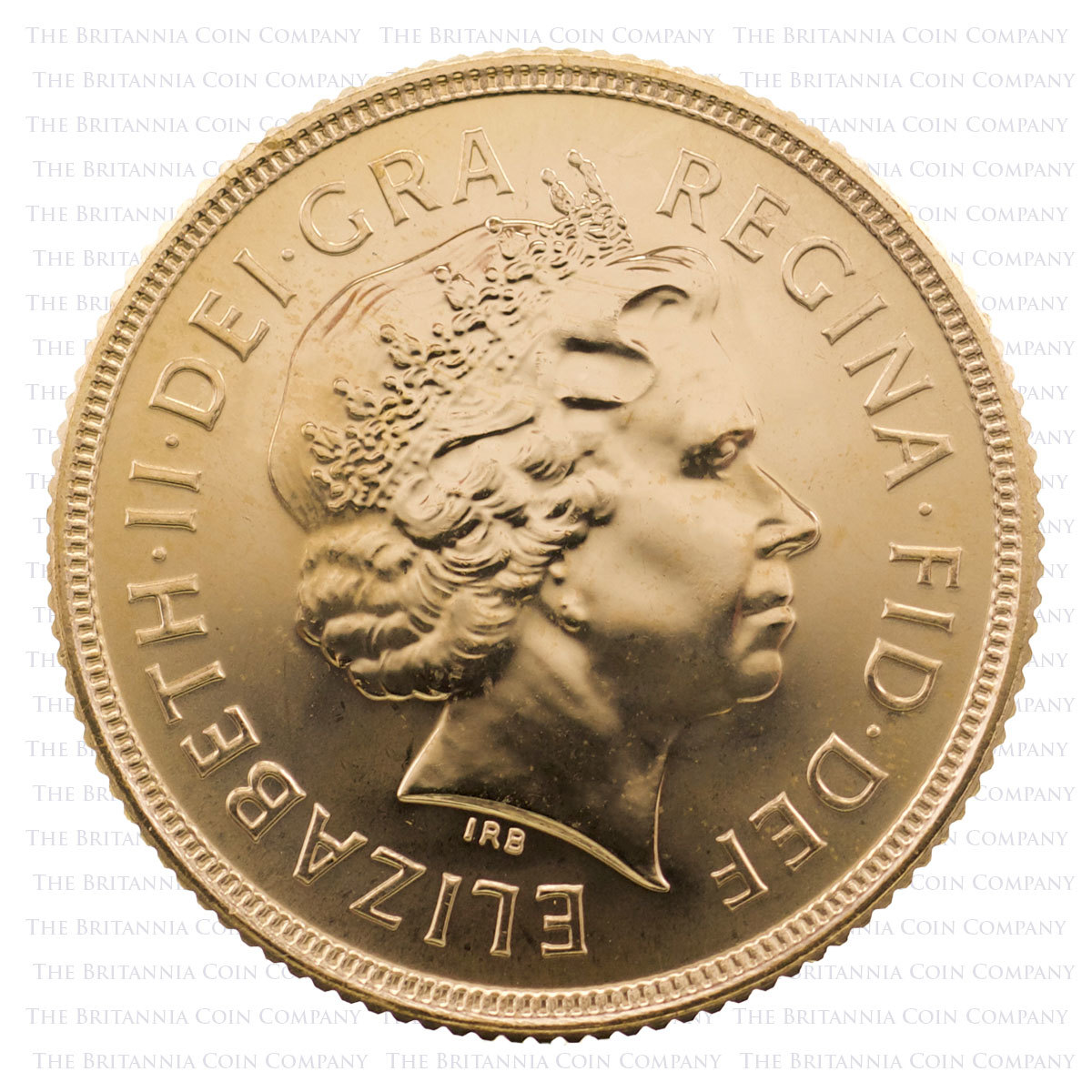 from
£419.47
(VAT Exempt)
Our 2003 gold Sovereigns are hand selected from our top-grade bullion stock. You will receive only Sovereigns graded aEF (about Extremely Fine) or better when you purchase our individual date coins. Extremely Fine coins have limited signs of wear, making them the ideal choice if you’re buying a gift. 2003 Sovereigns pair Ian Rank-Broadley’s portrait of Her Majesty the Queen with Benedetto Pistrucci’s Saint George and the Dragon. Bullion Sovereigns issued in this year: 43,230. 22 carat/916.7 fineness, 7.98 grams, 22.05 millimetres diameter. Capital Gains Tax exempt and VAT free. Insured UK delivery included.
Log in to get notified when this product is back in stock.
Track Product
You are not logged in. Please Login to track this product.
Description Summary Specification Royal Mint About us

What Are Bullion Gold Sovereigns?

The first Sovereigns were struck in the Kingdom of England during the reign of Henry VII. The Tudor and Stuart Kings presented these large hammered gold coins to courtiers and diplomats as a symbol of their majesty. Surviving examples are highly prized by collectors.

Centuries later the name was revived for a new gold coin. These modern Sovereigns were introduced as part of The Great Recoinage: a shake-up of British currency that took place in the aftermath of the Napoleonic Wars. First struck in 1817, the new Sovereign replaced the gold Guinea.

Initially, Sovereigns were only produced in London. Later, The Royal Mint opened branches across the Empire, taking advantage of gold rushes in Australia and South Africa. The Sovereign ceased to circulate in the early twentieth century but retained its reputation as a bullion coin, popular around the world. Today these coins are issued annually for the investment market with collectable proof editions offered for a host of eager buyers.

What Are Bullion Sovereigns Made Of?

The composition of British coins like gold Sovereigns is tested publically at the annual Trial of the Pyx. In this historic ceremony, dating back to medieval times, Royal Mint coins are assayed by members of the Company of Goldsmiths to ensure they meet the required dimensional and fineness.

These coins measure 22.05 millimetres in diameter and have a milled edge that is 1.52 millimetres thick. These are specifications that have been followed closely since these coins were first issued and apply to both bullion and proof 'full' Sovereigns, distinguished by the number of times they are struck during the production process and the level of detail in the resulting coin.

This 2003 coin features a classic reverse design, long associated with the gold Sovereign, showing St George - England's patron saint - in the act of slaying a dragon from his position on horseback. The warrior Saint wears a flowing cloak and a Corinthian helmet, his sword pointing at the beast under his steed's hooves.

The instantly-recognisable engraving originated in 1817, inspired by the recent military victories on the continent and the succession of King Georges occupying the British throne. St George had been associated with England since the middle ages.

The design is the work of an Italian artist named Benedetto Pistrucci who created the engraving on the orders of then Master of the Royal Mint, William Wellesley-Pole, brother of the Duke of Wellington. Pistrucci's Saint George - so different in style from contemporary coinage - has become a calling card of these gold coins, used with only minor modifications for nearly two centuries.

The fourth definitive coin portrait of Queen Elizabeth II is shown on the obverse of 2003 Sovereigns. This royal effigy is the work of British sculptor Ian Rank-Broadley and was first seen on circulating, commemorative and bullion coins in 1998.

Rank-Broadley trained at the Slade School of Art before starting a career specialising in low-relief sculpture. His work can be seen at the National Memorial Arboretum, Kensington Palace, numerous museums and on various collectable coins. He's most famous for his coin portrait of Her Majesty, unveiled in 1997 to replace Raphael Maklouf's third effigy.

The Queen is shown wearing the Girls of Great Britain And Ireland Tiara, created for the future Queen Mary in the late nineteenth century and worn regularly by Elizabeth II during her reign. Rank-Broadley's initials ('IRB') can be seen below Her Majesty's neck with the legend around reading: 'ELIZABETH · II · DEI · GRA REGINA · FID · DEF'.

Do 2003 Sovereigns Increase In Value?

We're not financial advisors but when our customers ask us what gold coin they should choose to diversify their portfolio, we always recommend gold full Sovereigns like these 2003 coins. Here's why we think they're a sensible buy for any investor:

Our 2003 investment Sovereigns are all graded About Extremely Fine (AEF) or better. You'll receive an uncirculated coin that has minimal signs of wear or handling, ideal for gifting. The Royal Mint's bullion finish ensures a high-quality strike, perfect for adding to your stack.

Fake Sovereigns are common but we've got decades of experience identifying them. Our expert team use high-tech XRF technology to check the composition, ensuring you get a genuine, full-weight Sovereign every time. Don't believe us? Check our top-notch eKomi reviews.

We've also got proof 2003 Sovereigns available. These coins are rarer than their bullion counterparts and have a finer finish, achieved with multiple strikes of hand-preapred dies. It's also worth checking out our best value Sovereigns if you're just looking to invest in gold. These bullion coins come in our choice of date, guaranteeing you a high-quality 22-carat gold coin to add to your stack.