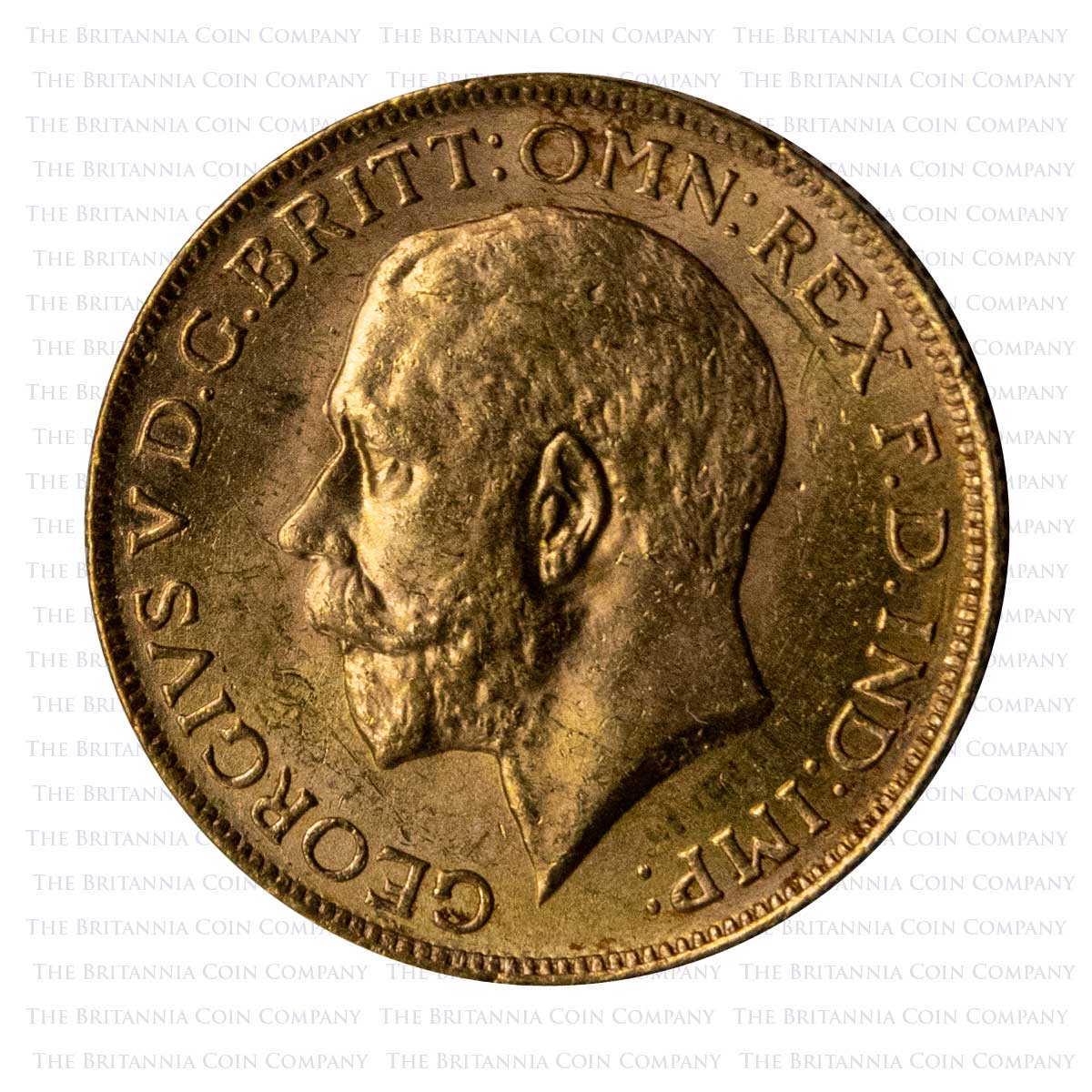 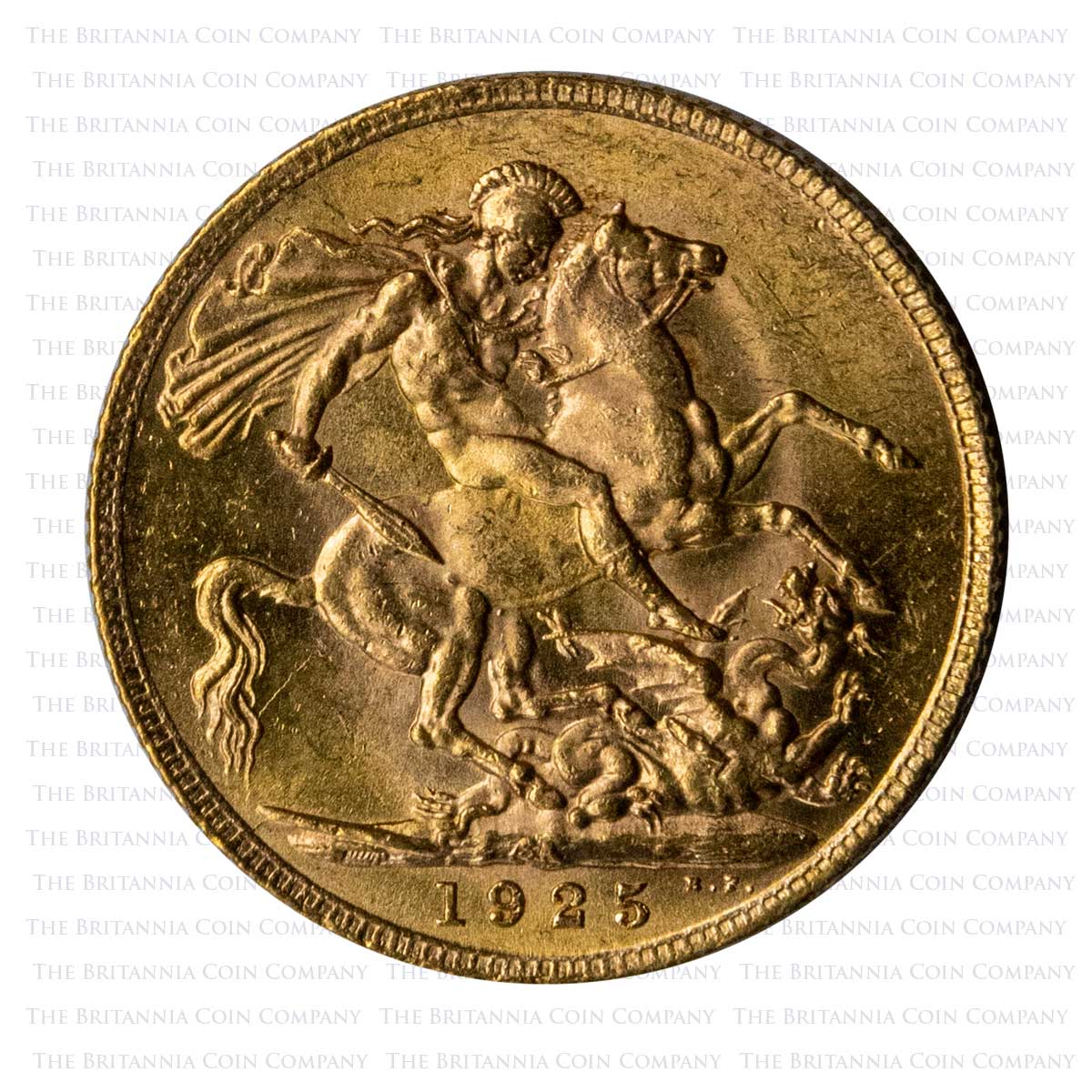 from
£425.00
(VAT Exempt)
A collectable gold full Sovereign of King George V, dated 1925 and struck in Pretoria, South Africa. The obverse features the bare head portrait of George V, facing left, by the engraver Sir Edgar Bertram Mackennal. His initials appear on the truncation of the king’s neck. The reverse shows Saint George, armed with a sword slaying a dragon under foot by the famous nineteenth-century engraver Benedetto Pistrucci. A tiny ‘SA’ appears on the ground below the horse, indicating that this piece was struck in Pretoria. This branch mint operated for less than a decade in what was then the Union of South Africa. 22 carat gold Sovereigns were struck at this Royal Mint facility from late 1923 until 1932 including 6,086,624 in 1925. The South African branch mint was the last to be founded and the last to strike Sovereigns, continuing to produce these coins for years after minting ceased in London. Like all Sovereigns, this South African example is composed of 7.98 grams of 22 carat (916.7) gold and has a diameter of 22.05 millimetres. Grade: EF - Good clean coin, no issues for grade: Extremely Fine. S 4004.
Log in to get notified when this product is back in stock.
Track Product
You are not logged in. Please Login to track this product.
Description Summary Specification About us

George V became King-Emperor in May 1910, following the death of his father, Edward VII. During George's reign the British Empire reached its greatest territorial extent while other European empires fell with the events of the First World War. George was succeeded briefly in 1936 by his eldest son, Edward VIII, who abdicated in favour of his brother who reigned as King George VI.

The obverse of George V Sovereigns features Sir Edgar Bertram Mackennal's portrait of the King, facing left, as used on all his British coinage. This is accompanied by a legend that reads: 'GEORGIVS D. G. BRITT: OMN: REX F. D. IND: IMP:'. The reverse of these coins shows the date and Benedetto Pistrucci's interpretation of the legend of Saint George and the dragon, created in 1817 for the first modern Sovereigns.

Sovereigns were struck in London during George V's reign but also at branch mints in Australia (Melbourne, Sydney and Perth), Canada (Ottawa), South Africa (Pretoria) and India (Bombay). You can identify George V branch mint Sovereigns by examining the ground beneath the dragon on the reverse for an identifying letter.

History Of The Pretoria Mint

Gold was discovered in the South African Republic in 1886 and from the resulting boom came a domestic currency, struck at a mint, opened in Pretoria in 1892 by President Paul Kruger. This mint ceased operations during the early years of the British occupation when UK currency became legal tender. Coin production in Pretoria - then the administrative capital of the Union of South Africa - began again in 1923 when the city became the site of the final Royal Mint branch to be opened.

The first South African Sovereigns were struck in Pretoria in late 1923. Those early Sovereigns are particularly rare though production increased through the decade to the point where 18 million of these gold coins were being struck in 1928, more than a decade after Sovereigns had ceased being minted in London.

The Pretoria mint was the last of the branch mints to strike Sovereigns, the final issue being made in 1932. In 1941 the facility was reopened as the South African Mint, tasked with producing all coins of the South African Rand, including their own influential gold coins the Krugerrand.

You can identify Sovereigns minted in South Africa by the tiny 'SA' found above the date on the reverse. These gold coins were minted in Pretoria for less than a decade so they're not too common but very collectible. This 1925 example is one of 6,086,624 minted in this year.

Our historic gold Sovereigns are individually graded and authenticated by our expert staff. You will receive the coin in the photographs displayed above.

Like all British Sovereigns, this one is VAT free as investment gold and Capital Gains Tax (CGT) exempt because it's UK legal tender. It's composed of 7.98 grams of 22 carat (916.7) gold with a diameter of 22.05 millimetres.

Got a historic branch mint Sovereign you are looking to sell? We buy Sovereigns minted in Pretoria and other rare coins for market leading prices. Visit our Sell Your Coins page for more information or contact us today for a free, no-obligation quote for your George V Sovereign. 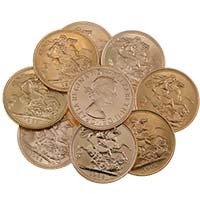 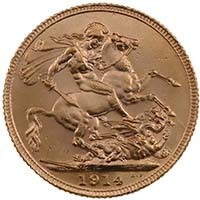 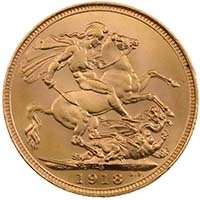