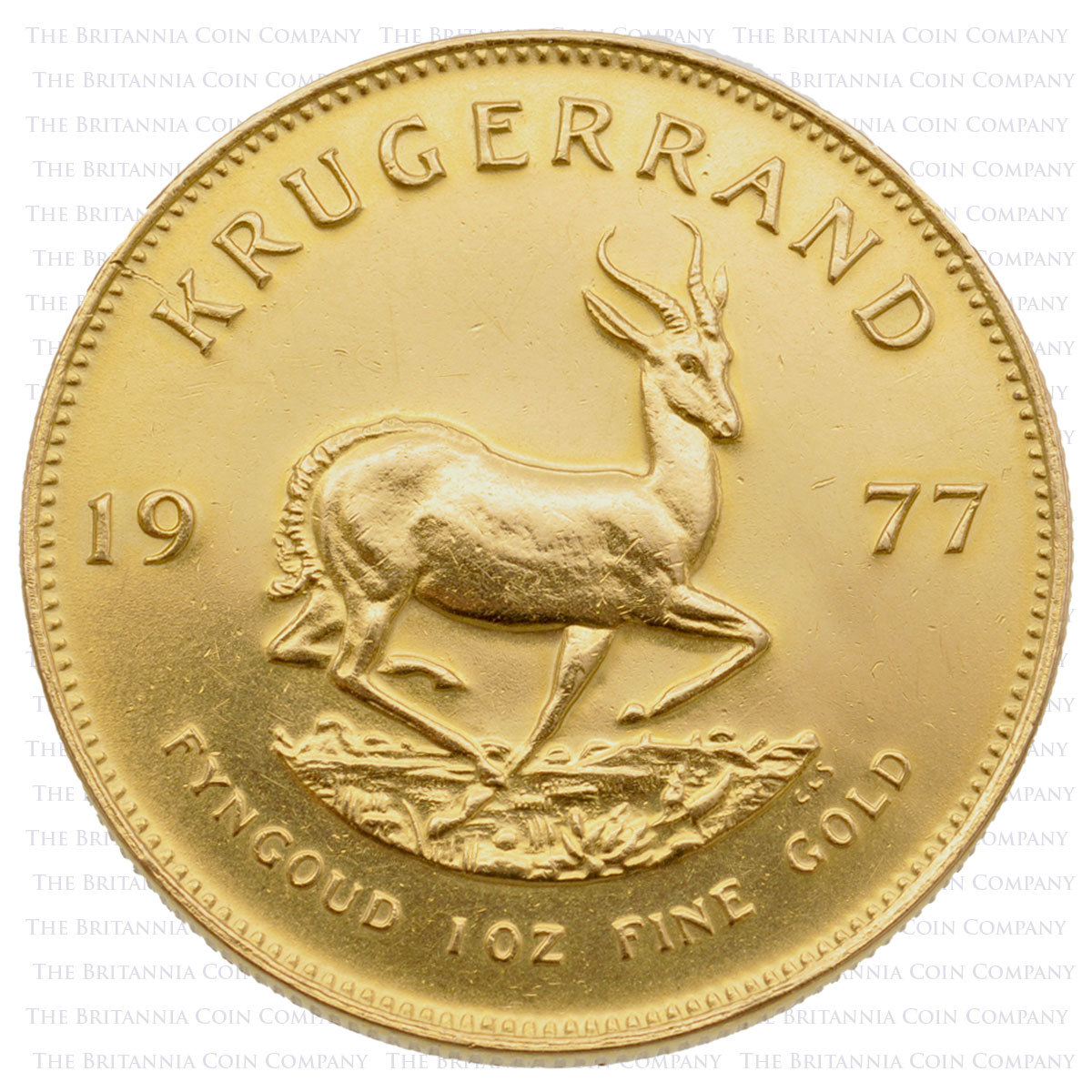 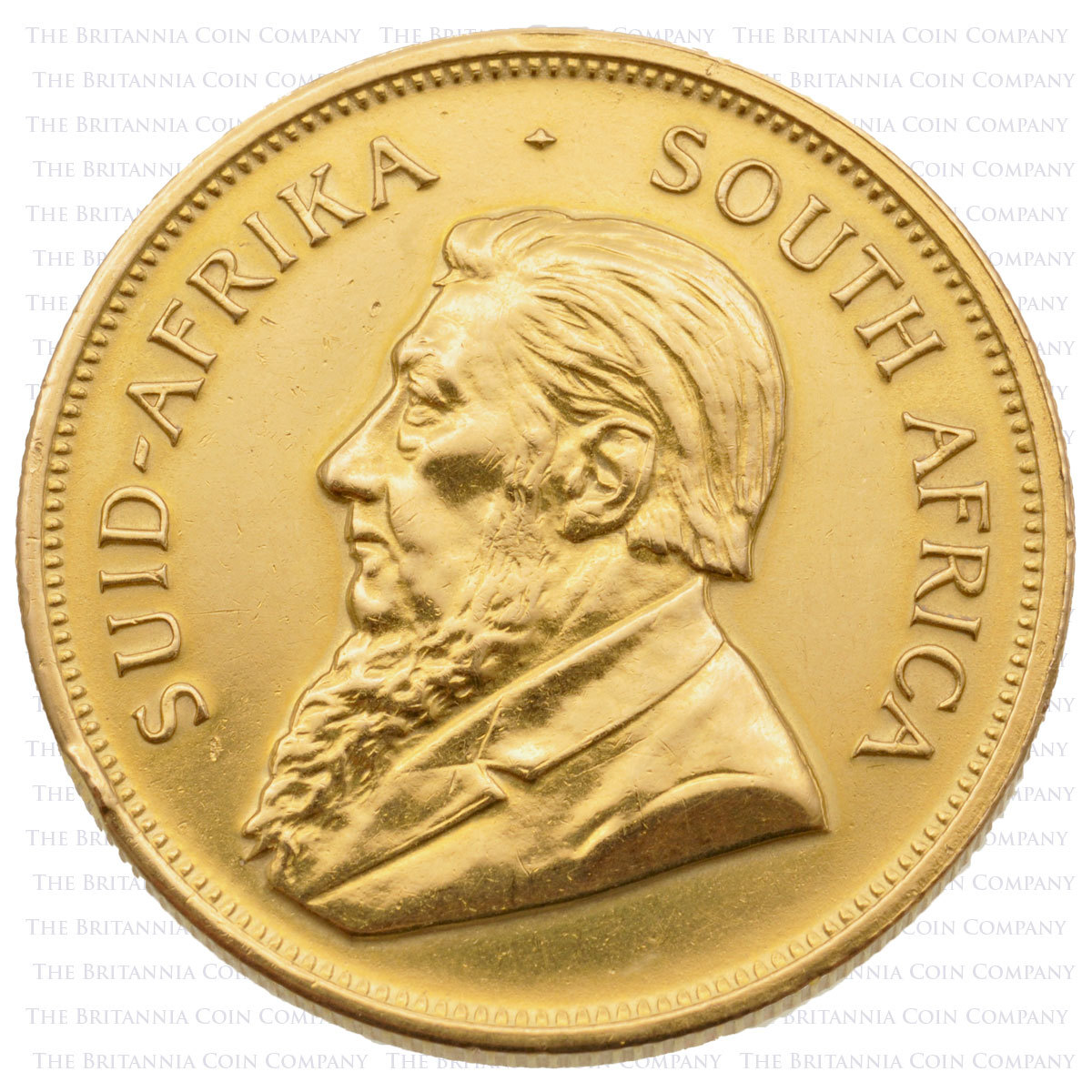 Krugerrands are the official gold 1oz coins of South Africa and are produced by the Rand Refinery and the South African Mint. They are very popular with bullion collectors and their price is usually very closely associated with the current gold price.

In modern bullion gold coin investing history, the gold 1-ounce Krugerrand is the most famous of all 1oz gold coins. It was launched by South Africa in 1967 and by 1980 the Gold Krugerrand accounted for 90% of the global gold coin market.

Mintage in 1967 was 50,000 coins but by 1978 had reached more than 6 million. The figure has been lower in recent years as many other countries are now competing in the one-ounce gold coin market, but the 1oz Gold Krugerrand is still one of the World's most traded gold coins.

The Main Advantages of the 1oz Gold Krugerrand are:

The design of the 1oz Gold Krugerrand has been fairly consistent since its introduction in 1967.

The name is derived from a combination of Kruger (the former South-African president depicted on the obverse) and Rand, the South African unit of currency. Paulus ("Paul") Kruger (1825-1904) was President of the South African Republic from 1883 to 1900. The eponymous Kruger was one of the most important people in the history of 19th century South Africa.

The obverse (front, heads) shows an image of Paul Kruger with the words 'SUID-AFRICA  SOUTH AFRICA', which is the spelling of the country in Africana and English.

The reverse shows the springbok, a medium sized antelope indigenous to South Africa and is a common symbol of the country. The South African rugby team is nicknamed the "Springboks". The inscription confirms the gold weight 'FYNGOUD 1 OZ FINE GOLD', together with the date and the words 'KRUGERRAND'.

Although the 1oz Gold Krugerrand is legal tender, the South Africa government decided not to denominate the Krugerrand with a numerical Rand value, rather stating the face value should be the price of its gold content.

South Africa is officially the Republic of South Africa (RSA). It is the southernmost country in Africa. The currency is the South African Rand. In 1961, South Africa replaced the pound with a decimal currency: 100 cents (100c) = 1 rand (R1).

The 1oz Gold Krugerrand is also available in a Proof version. This is a highly polished and carefully finished version of the coin is especially intended for numismatists (coin collectors) rather than bullion investors. The Proof version does cost more than the bullion version, but the market for these coins is strong and the resale value of the coin will also be higher.

If you can't tell the difference between a proof coin and a bullion coin just by looking, then count the number of serrations on the edge of the coin: Proof Krugerrands have 220 edge serrations and bullion coins have 160.

The Krugerrand is no longer just a 1oz Gold coin

As popularity of the Krugerrand and other gold coins increased together with the price of gold, in 1980 the South African Mint introduced half-ounce, quarter-ounce and one-tenth ounce gold Krugerrands so as to allow smaller investors to enjoy the benefits of coin too. Since then, the family has been extended further. Each coin follows the same designs as the full one-ounce Krugerrand.

Additionally, Gold Krugerrand Sets are available which have either a combination of different sized coins or a mixture of dates.

In 2017, the 50th anniversary of the launch of the 1oz Gold Krugerrand, the South African Mint shocked the coin World by issuing a Silver Krugerrand. The anniversary celebrations also included placing a special mint mark on the gold Krugerrands.

Q: Is the 1oz Gold Krugerrand exempt from Capital Gains Tax (CGT)?
A: No, only gold coins that are legal tender in the UK qualify for this. If CGT is important for you then you should consider UK Gold Coins such as Gold Sovereigns or Gold Britannias. The 1oz Gold Krugerrand is VAT-free. Always consult an accountant or legal/tax advisor for the current legislation regarding gold investments.

Q: Why is the 1oz Gold Krugerrand 91.67% gold and not pure gold?
A: Pure gold would wear very quickly and so the mint adds copper, in the ratio 11/12ths gold and 1/12th copper. This alloy is 22 carat or 91.67% gold and is considerably harder and more durable than 24 carat gold. 1oz Gold Krugerrand coins do get handled from time to time. Pure Gold is actually quite soft and can easily scratch and dent.

Q: Bullion or Proof. What's the difference and Which should I Buy?
A: The main differences of the two types is in the finish, and this affects in the visual appearance of the coin. Both coins will carry the SAME amount of gold. Which type you buy depends what your intentions are.

1oz Gold Krugerrand Bullion coins are minted purely for gold investment. The coin is not so visually appealing as a proof and may have scuffs and scratches from the production process. If you're just looking for gold, then this is the cheapest way to buy. The price will be close to the spot price of gold.

Q: Are the 1oz Gold Krugerrand Coins genuine?
A: Yes, and we guarantee it. With high value coins and investments such as the 1oz Gold Krugerrand, collectors and bullion investors often worry about counterfeits, but actually gold coins are very difficult to forge due to gold's unique properties of density and colour. Gold is extremely dense and to use another metal and gold-plate it would result in a coin that is under-weight, over-diameter or half-again as thick, something that would be spotted very easily by a expert. You can buy from us 100% worry free.

Specifications of the 1oz Gold Krugerrand