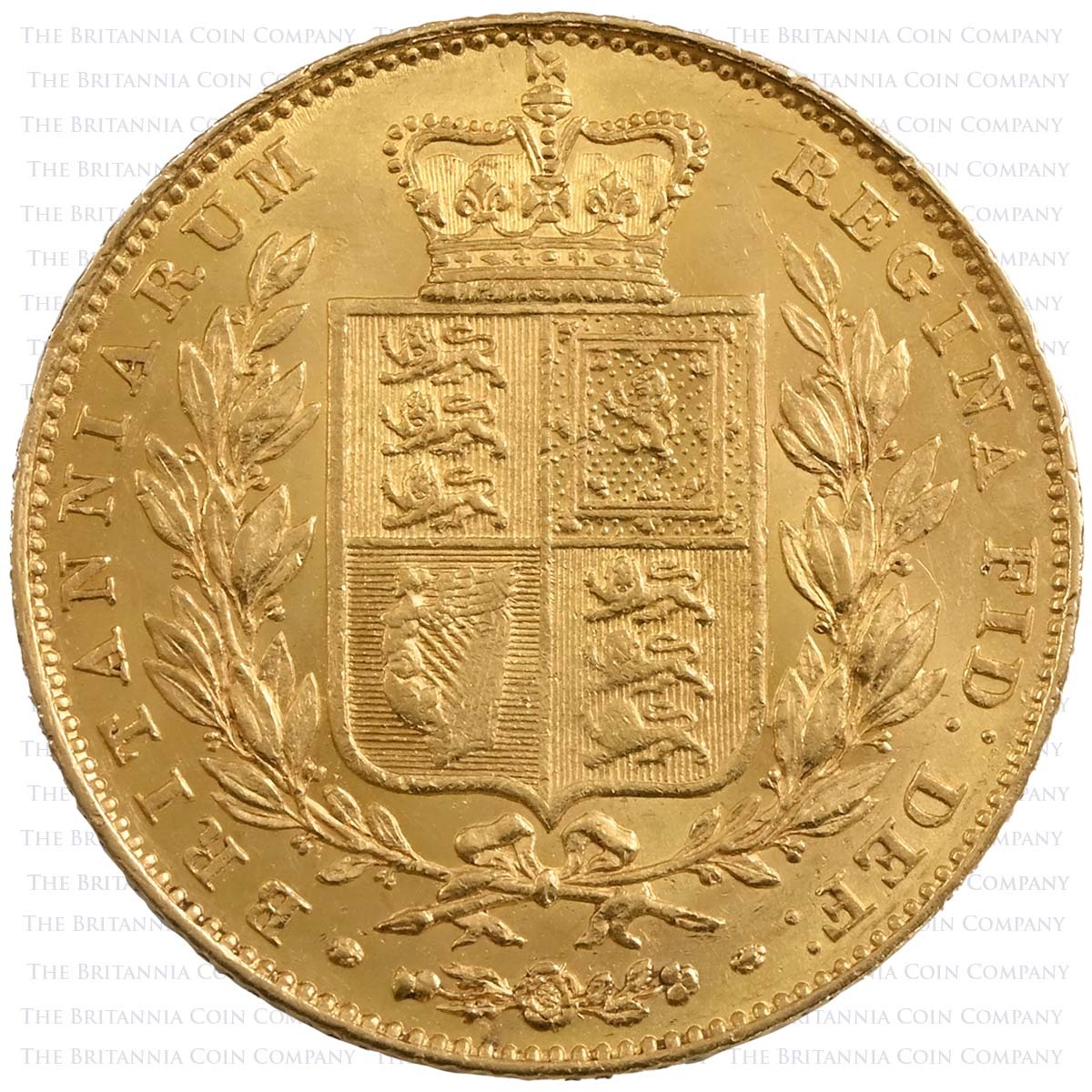 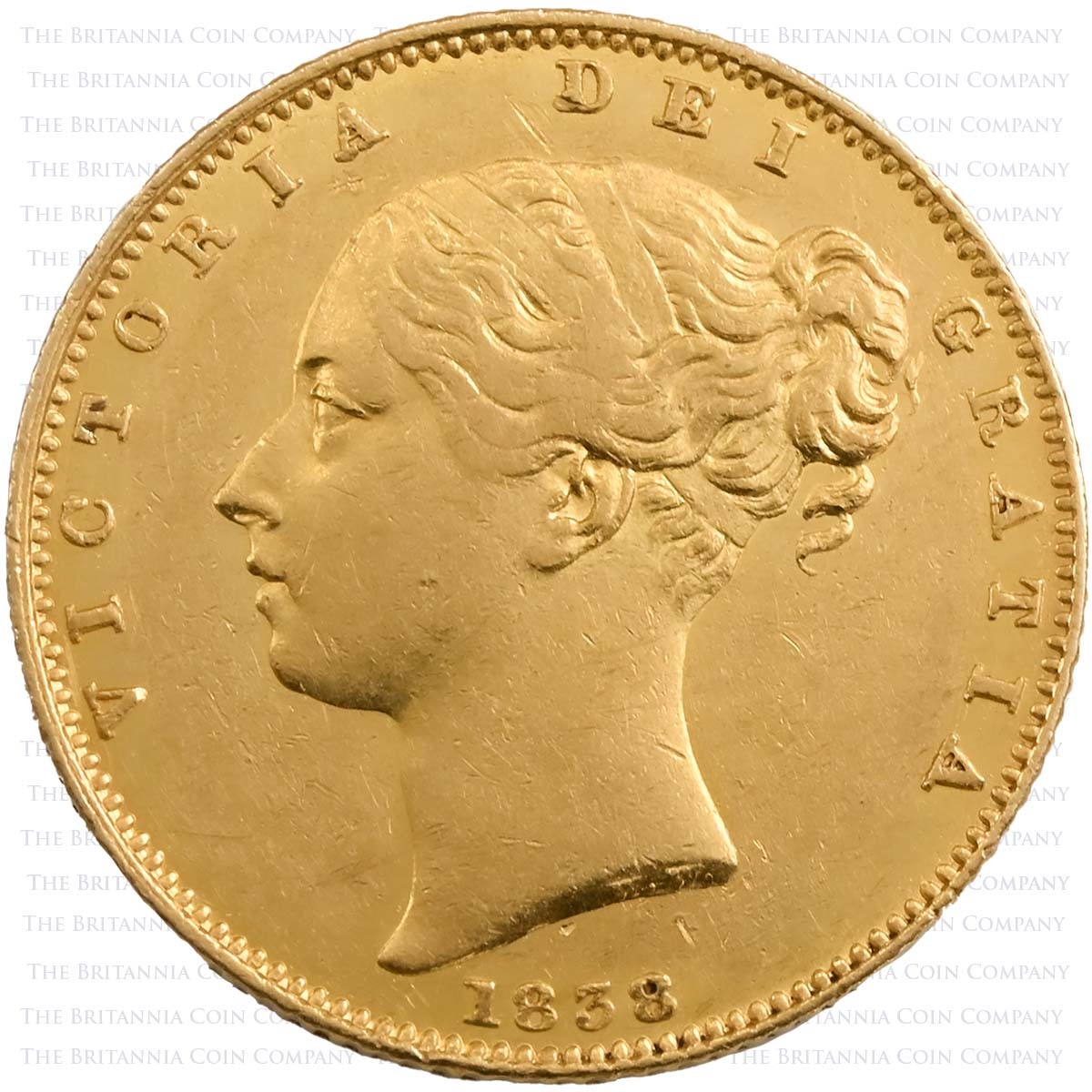 from
£2,995.00
(VAT Exempt)
Gold Sovereign, issued in 1838, the year that Queen Victoria, age just 19, was crowned at Westminster Abbey. The obverse shows the first, left facing portrait of Victoria, her hair bound up with two ribbons. This is the work of the celebrated William Wyon whose initials appear in relief with stops on the truncation of the Queen's neck. Wyon had been Chief Engraver at The Royal Mint since 1828 and his 'Young Head' as the portrait became known would be seen on British and colonial money until long after his death and the point at which Victoria looked much like her favourite coinage portrait. The date appears below the effigy and the legend around reads 'VICTORIA DEI GRATIA', well spaced from the central design in this type 1A, group 1 Sovereign. The reverse features Jean Baptiste Merlen's crowned shield of arms, surrounded by a laurel wreath and a legend that reads 'BRITANNIARUM REGINA FID: DEF:'. National flowers appears below the ribboned tie of the wreath but no die number is shown. Like all 'full' gold Sovereigns, this one is composed of 7.98 grams of 22 carat (916.7) gold and has a diameter of 22.05 millimetres, measured from milled edge to milled edge. As the first general circulation Sovereign issued during the reign of Victoria, this coin is rated 'R' (Rare) by Marsh as one of 2,718,694 struck by the Royal Mint, then based at Tower Hill. Grade: EF/GEF - Excellent details, some very minor contact marks and dinks under magnification mainly on obverse, some lustre in legends: Extremely Fine with reverse better, rare in high grade and scarce in any grade. S 3852.
Log in to get notified when this product is back in stock.
Track Product
You are not logged in. Please Login to track this product.
Description Summary Specification About us

The first gold Sovereign of Queen Victoria: issued in 1838.

Victoria came to the throne at the age of 18 in 1837. She would wear the crown for 63 years across a period of unprecedented social, political and industrial change in the UK and the wider British Empire that would become known as the Victorian era.

The new Queen's first coinage was issued in 1838: her coronation year. Collectors enjoy Victorian coins for the beauty of their designs, as well as the possibility of assembling a long continuous series, through to her last issues in 1901. The three Australian branch mints (Sydney, Melbourne and Perth) that were opened during Victoria's reign add additional variety for the numismatist.

Victorian gold Sovereigns are particularly sought after. The appearance of these coins changed significantly over the course of the nineteenth century but the tightly controlled specifications, laid down in the reign of King George III, remained the same. These 7.98 gram coins were used across the British colonies and beyond, trusted to contain a known quantity of gold.

The first Sovereigns struck in the reign of Queen Victoria featured a portrait by the celebrated William Wyon. Born in Birmingham, the engraver had been employed by the Royal Mint since 1816, rising to the position of Chief Engraver in 1828.

His 'Young Head' as this effigy became known, shows the youthful queen facing left, her hair caught up in a knot at her neck, pulled back from her face by a double band. The date appears below and the portrait is surrounded by the legend 'VICTORIA DEI GRATIA'. This design, in modified form, would remain in use on British and colonial coinage until 1887, long after it ceased to be an accurate portrayal. The artist can generally be identified by the 'W.W.' initials to the truncation of the Queen's neck.

Wyon's depiction of Victoria, created from life in sittings held in August 1837, would become the dominant image of the Queen in the early part of her reign. It was adapted for use on postage stamps, beginning with the Penny Black. Wyon was also responsible for another famous portrait of Victoria, seen on the Gothic Crown.

The reverse of this 1838 Sovereign shows a distinctive design that led to these Victorian gold coins being referred to as 'shield backs'. It shows  a square topped shield of royal arms, surmounted by a crown, within a wreath of laurel, tied at the bottom with a ribbon. Below this are intwined national flowers. The legend reads 'BRITANNIARUM REGINA FID: DEF:'. Later examples show a die number above the flowers.

This is the work of Jean Baptiste Merlen, a French medallist and engraver who joined the Royal Mint in 1820. Working alongside William Wyon, Merlen produced reverse designs for Victoria's early gold and silver coinage, building on crowned shield designs that he had previously created for money issued by George IV and William IV.

Later in the century, an older design would be revived for use on gold Sovereigns. Benedetto Pistrucci's Saint George and the dragon engraving is now closely associated with these coins and is still used on many modern releases. Merlen's shield reverse, however, remains the calling card of the first Victorian Sovereigns: a motif that's instantly recognisable to numismatists.

Marsh reports that 2,718,694 Sovereigns were struck at the Tower Mint in 1838. His guide to gold Sovereigns gives this circulated coin a 'R' or 'Rare' rating. The Royal Mint says that this is the 37th lowest mintage Sovereign struck in London. As the first Sovereign issued in the reign of Queen Victoria - barring supremely rare 1837 patterns - this 1838 gold coin is an important but hard to acquire piece for Sovereign collectors.

Grade: EF/GEF - Excellent details, some very minor contact marks and dinks under magnification mainly on obverse, some lustre in legends: Extremely Fine with reverse better, rare in high grade and scarce in any grade.

Victorian Sovereigns conform to the narrow specifications established for these coins when they were first issued in 1817. Each one is composed of 7.98 grams of 22 carat (916.7) gold and has a diameter of 22.05 millimetres. Their gold content means that these coins are free from VAT in the UK and the EU while their face value of £1 / One Pound lends them an important Capital Gains Tax exemption.