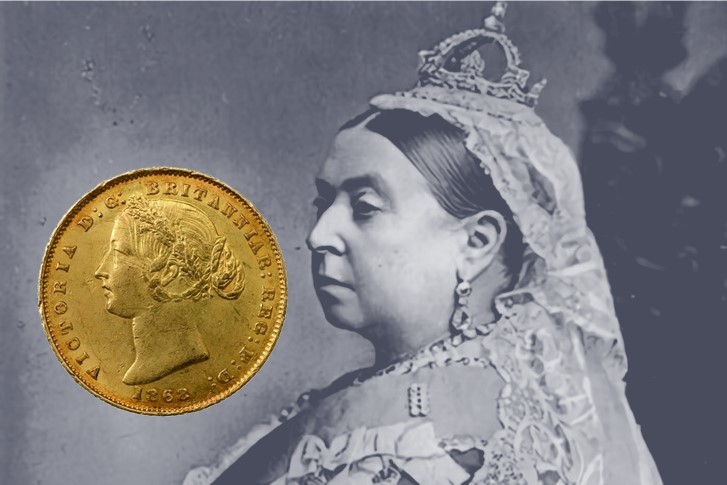 Through her 64 years on the throne, Queen Victoria's image appeared on some 2.3 billion coins which circulated across her Empire.

There were three major portraits used on British money during that long reign:

While these effigies are the most common they aren't the only depictions of the Queen to appear on her coinage.

In this article we're surveying six important effigies, the coins they appeared on and the artists behind some of the most widely reproduced works of art in the world.

Victoria inherited the throne on the death of her uncle, William IV in June 1837. That August, she summoned the Royal Mint's Chief Engraver, William Wyon, to Windsor Castle to prepare models for her coinage. She had previously met the artist when he was commissioned to sculpt her eighteenth birthday medal.

The design Wyon produced - known as the Young Head - was approved by the Queen in February 1838. In it, Victoria faces left, her hair tied back and bound with a double ribbon or 'fillet'. It's an elegant, clean-lined portrait that owes much to the neoclassical style that was popular in the early part of the nineteenth-century. 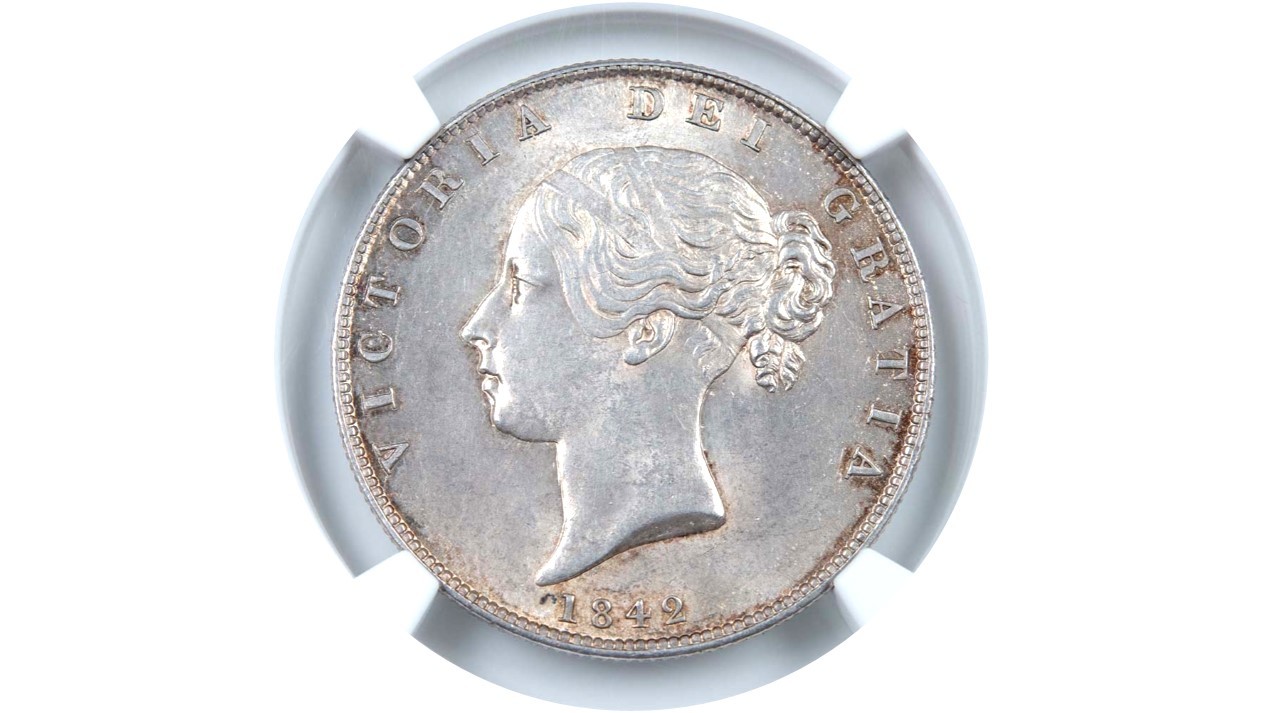 Victoria favoured the 'Young Head' effigy. It remained in use on gold and silver coinage until 1887 when she was in her late sixties and the portrait was no longer accurate. Through the years, a number of minor modifications were made: tweaking the nose, rearranging her hair and resizing the portrait in relation to the surface of the coin. These variants are grouped into five major categories, known as the 'First Young Head', 'Second Young Head' etc. Later coins tend to be struck in lower relief and show poorer workmanship.

A Literary Portrait: Una and the Lion

As William Wyon's Young Head began circulating on the new Queen's coinage, the artist was hard at work on an equally famous but much scarcer image of Victoria.

Regarded as one of the most beautiful designs ever to appear on British currency, Wyon's engraving for the reverse of the gold Five Pound coin, issued in 1839, shows Victoria as a character from Edmund Spencer's epic poem, The Faerie Queene. In the guise of Una - a brave princess - Victoria directs a lion onwards using her sceptre. The beast is 'passant' in heraldic terms, like on the arms of the United Kingdom. The image of a powerful young woman, calmly guiding a symbolic representation of the nation, made for a timely and evocative design.

Una and the Lion, reproduced in silver as part of The Royal Mint's Great Engravers series.

Wyon's choice to depict the Queen as a fictional character was a potentially controversial move. It was the first time a sitting monarch had been featured on a coin in this way.

The 1839 Five Pound was probably intended only for numismatic collectors as only 300 to 500 examples were ever minted; a few hundred initially then only on demand. Una and the Lion coins remain highly-sought after today, their popularity inspiring a Royal Mint reissue in 2019.

Victoria's affection for Wyon's work made him the obvious choice to craft new effigies when the need arose. Ten years into her reign, when he was commissioned to design a new silver Crown, Wyon was again able to elevate what could have become routine work.

The portrait he designed and engraved for what became known as the 'Gothic Crown' shows the influence of a very different art style to his earlier portraits of Victoria. The ornate detail of her dress and crown, her looping plait and the blackletter-style legend that encircles the image are all trappings of Gothic Revival. Also known as Victorian Gothic, the movement - at its height in the mid-nineteenth century - took its inspiration from the medieval world. 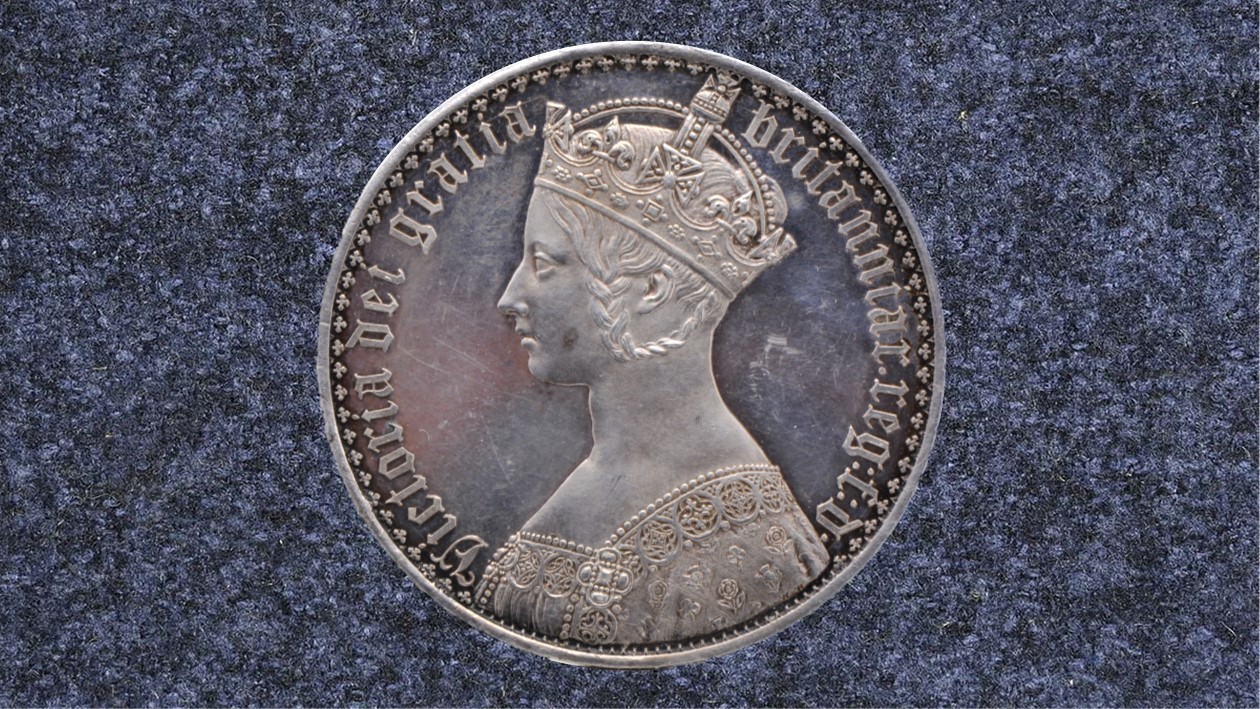 Only issued in 1847, the Gothic Crown had a limited mintage of around 8,000 pieces, stimulating immediate interest from collectors. In 1849 the effigy was recycled for a new silver coin: the Florin. Known as the Godless Florin, it achieved infamy because the inscription left out the traditional 'FIDEI DEFENSOR' ('Defender of the Faith'). The legend was revised for the next issue of Florins and the portrait used until 1887.

Crowns and Florins with the Gothic Head are highly collectible but the rarity of this former means that highly graded examples can command extraordinary prices.

The first international branches of the Royal Mint were established during Victoria's reign, starting with Sydney in 1855. The Sovereigns and Half Sovereigns struck in New South Wales from recently discovered gold were minted to the same weight and fineness as their UK counterparts but – for a few years at least – they featured a unique obverse.

The image of Victoria that appeared on the first Australian Sovereigns looks, at first glance, very much like the Young Head. Close comparison finds the nose slightly longer, her mouth somewhat smaller. This portrait, known as the Fillet Head, was struck on Sydney Sovereigns in 1855 and 1856 from dies prepared by James Wyon, an employee of the London mint and a cousin of William Wyon.

Another Wyon produced the second distinct Sydney-only portrait of the Queen, used between 1857 and 1870. Leonard Charles Wyon – son of William – added a distinctively Australian touch by crowning Victoria with a sprig of banksia: a flowering plant native to the continent. L C Wyon's effigy also adds a fashionable looping plait to Victoria's hairstyle, echoing that seen in the Gothic portrait. 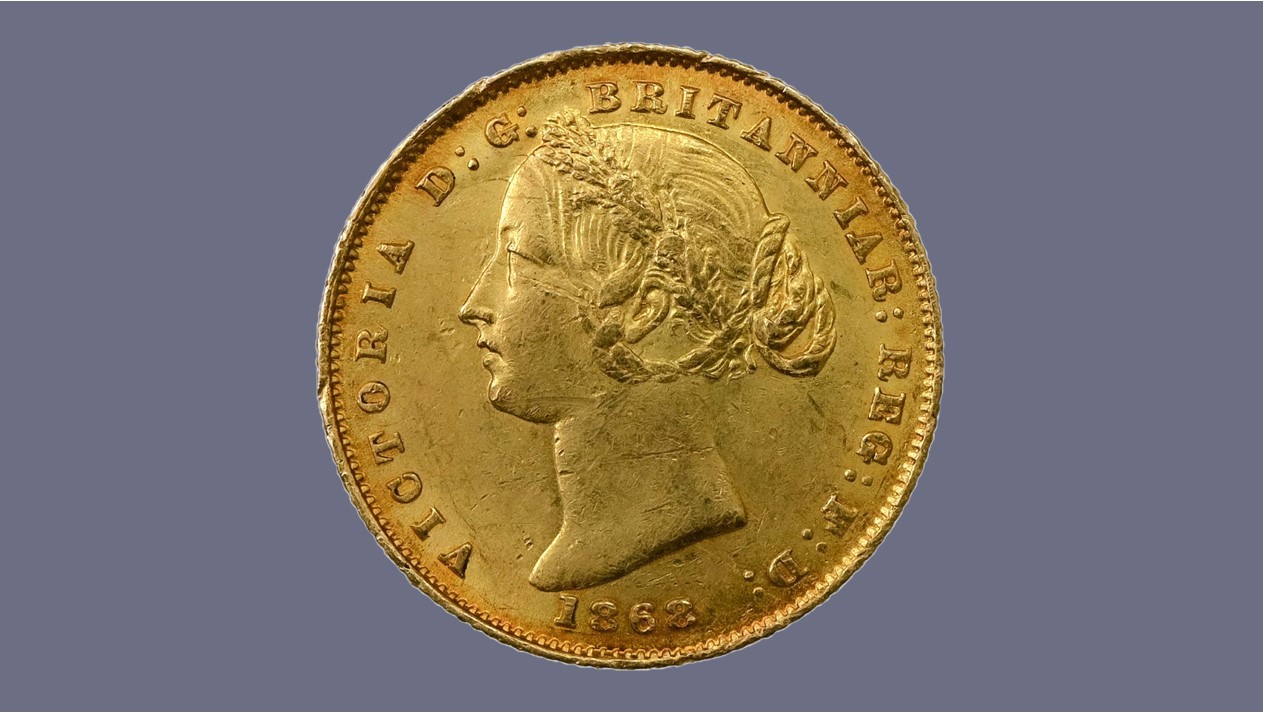 An 1862 Sydney Sovereign showing the Banksia Head portrait of Victoria.

Sadly, from 1871 the portraits used on branch mint Sovereigns were conformed to those minted in Britain. Later Sydney Sovereigns are distinguished only by a small 'S' mint mark.

L C Wyon was granted a number of sittings before the design was finally approved by Victoria who took a personal interest in the project. In his effigy, the Queen is crowned with a wreath of laurels, tied with a ribbon at her nape. Her hair is pulled up in a plaited bun, leading to pennies with this portrait being affectionately called 'Bun Pennies'. The portrait extends to the edge of the coin, the Queen's shoulders draped in a mantle decorated with national flower emblems. 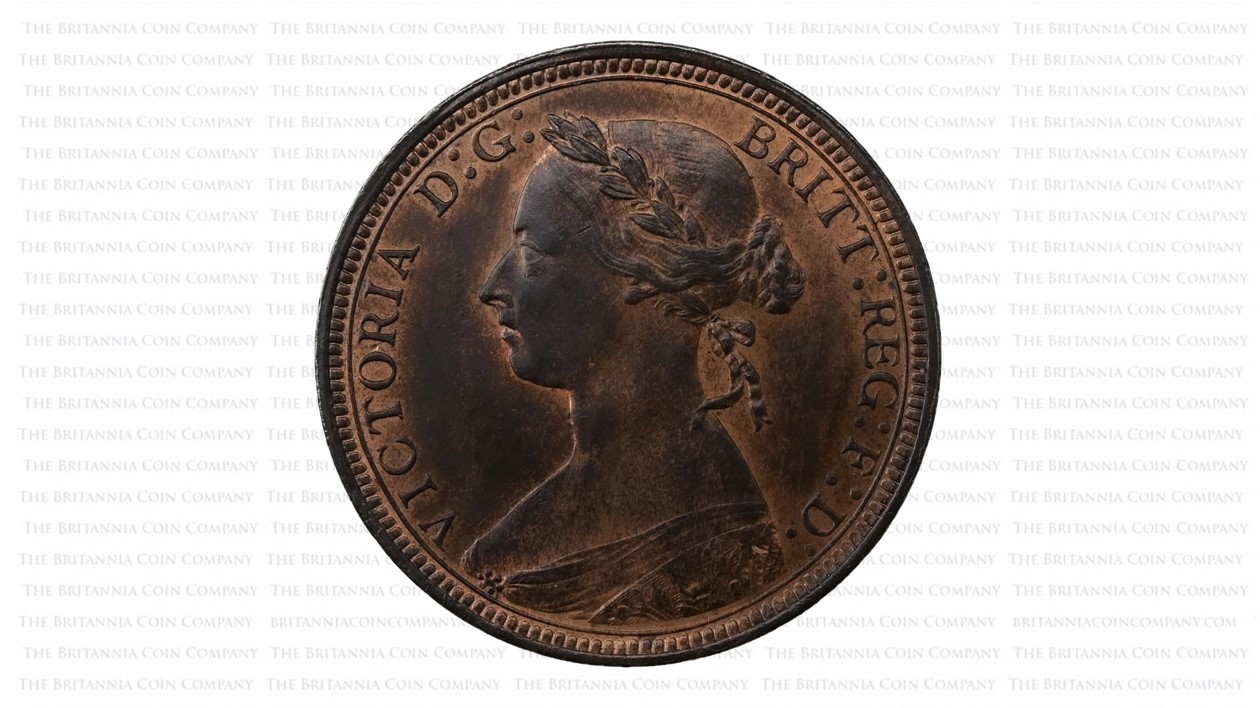 A Bun Head portrait on a copper Halfpenny.

A significant number of Bun Head types are described in the literature but two major variants can be easily distinguished. The version introduced in 1860 and known as the Early Bun Head has a more youthful appearance than the slightly jowly Late Bun Head, in use from 1889. Both appear truncated on Half Farthings and Third Farthings, leaving more room for the legend.

The hard-wearing copper coins bearing this popular portrait remained in circulation for over 100 years, only fully withdrawn with decimalisation.

The Bun Head displaced the Young Head on copper coins in the 1860s but it wasn't until 1887 that a new portrait appeared on gold and silver denominations. That year marked Victoria's Golden Jubilee.

Among the public works commissioned for the anniversary were several by prolific and popular sculptor, Joseph Edgar Boehm, ranging from 15 foot bronze statues to an eagerly anticipated coinage effigy.

The 'Jubilee Head', as Boehm's portrait became known, shows the Queen sporting a long veil: a nod to the state of deep mourning she adopted after the death of her consort, Prince Albert, in 1861. She wears a crown, jewels and two other symbols of state: a Garter Star and the badge of the Imperial Order of India. The effigy would appear on gold and silver coins including the short-lived Double Florin, as well as a medal issued in the same year. 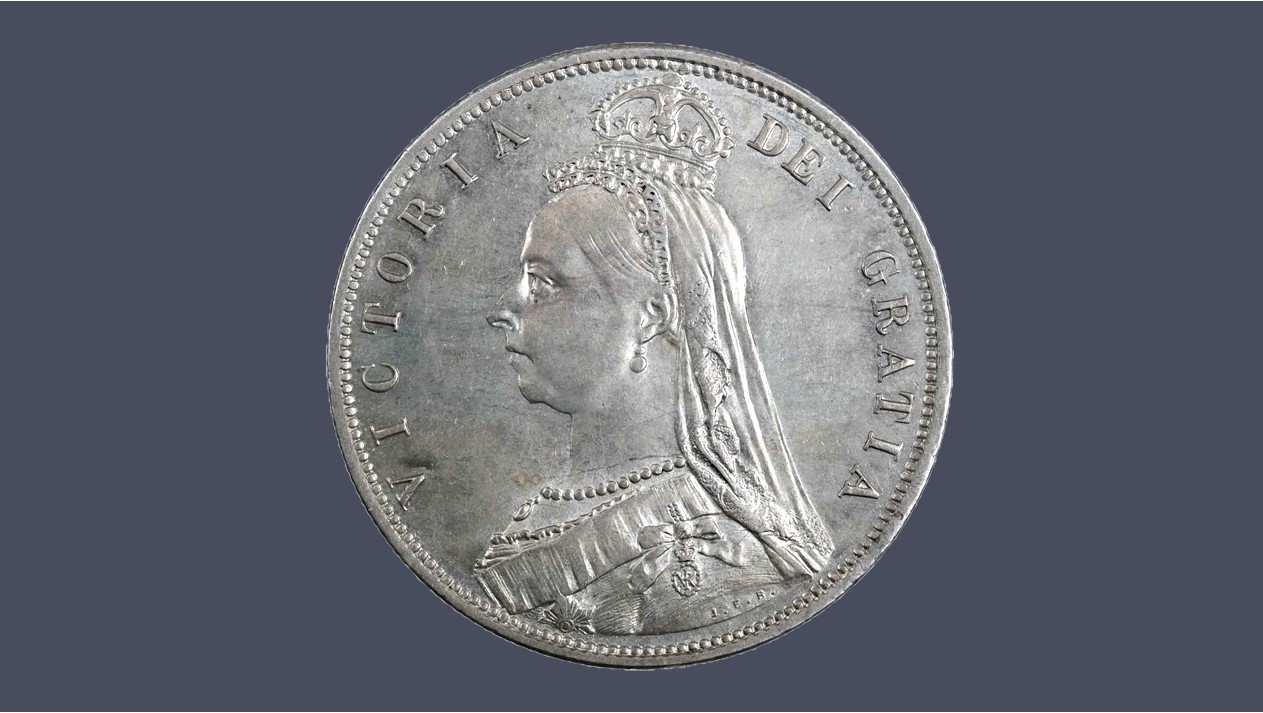 The Jubilee Head portrait as it appears on an 1887 silver Halfcrown.

While the portrait was realistic it certainly wasn't popular. Complaints in parliament and the press centred on the crown which is oddly small and seemingly at risk of toppling off the Queen's head. Victoria herself did not like it and the 'undignified' Jubilee Head was replaced as soon as was practical.

The final portrait of Victoria to appear on British currency was crafted by Sir Thomas Brock.

Known as the Old Head, Veiled Head or Widowed Head, Brock's portrait is a flattering but accurate depiction of the Queen who was 74 when it was adopted in 1893. In it, she wears the trappings of royalty - a tiara, earrings, heavy necklace and Garter star – but also the signs of age: she's got a double chin and wrinkles around her eyes. Despite this there is something in the elegant style and delicate features of the portrait that reminds us of William Wyon's Young Head. 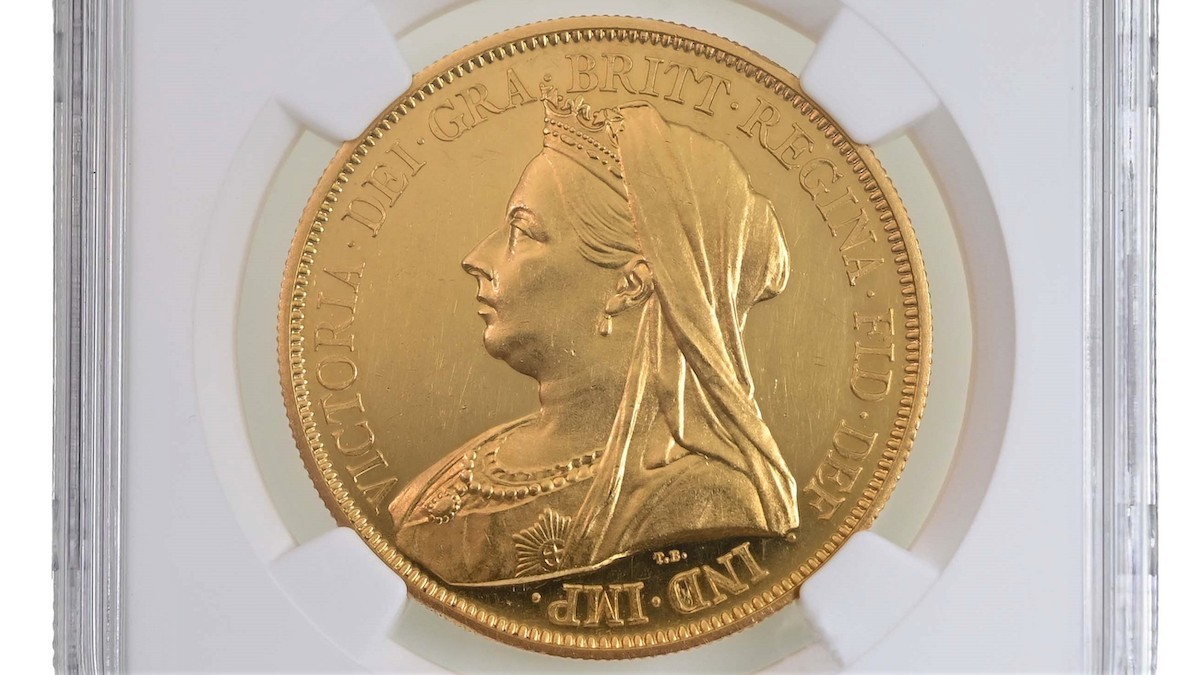 A Veiled Head portrait appears on the obverse of this 1893 gold Five Pound, graded PF 61 Cameo.

The most striking feature of the Old Head is perhaps Victoria's mourning veil which drapes gracefully over her shoulders. She was still wearing her widow's weeds in her final decade and they were, by then, integral to her public image.

Brock's portrait initially appeared on UK gold and silver coinage and then on bronze coins from 1895 until Victoria's death in 1901. Brock would go on to design the Victoria Memorial, built in front of Buckingham Palace in celebration of her long and momentous reign.