from
£0.01
(VAT Exempt)
Three coin 2023 Sovereign sets: register your interest now. Click TRACK PRODUCT below to sign up for email alerts. We’ll send you a message as soon as we have this set in stock. Proof Sovereign sets are issued annually by The Royal Mint and are sought after by collectors and investors. The obverse of coins in the 2023 Sovereign family will likely show Jody Clark’s portrait of Queen Elizabeth II, in use on British coinage since 2015. The most commonly used reverse in the last century has been the image of Saint George and the Dragon. Created in 1817 for the first modern Sovereigns, this design is the work of Italian artist Benedetto Pistrucci. In the last couple of decades, proof Sovereigns have displayed one-year-only design changes, usually authorised for royal anniversaries. 2023 will mark 70 years since Her Majesty the Queen’s 1953 coronation so this might be celebrated with a privy mark or an alternate reverse. Right now we don’t know much about the design but we’ll update our info and share details on our social media pages when we do. Three coin Sovereign sets usually contain a ‘full’ proof Sovereign, a Half Sovereign and a Quarter Sovereign and will only be available in limited numbers. Sign up today to avoid disappointment.
Log in to get notified when this product is back in stock.
Track Product
You are not logged in. Please Login to track this product.
Description Summary Specification Royal Mint About us

Sign up for email alerts to get your three-coin 2023 proof Sovereign set.

If previous years are anything to go by, three coin sets for 2023 will contain:

These Sovereign sets will only be available in limited numbers in 2023: sign up today for email alerts. 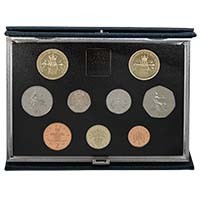 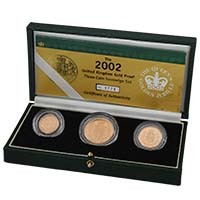