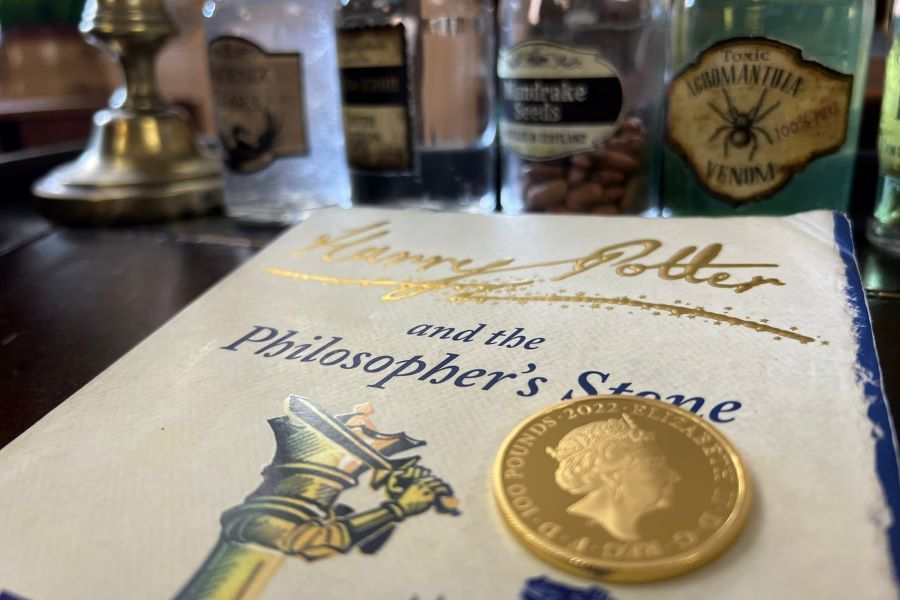 In October 2022 The Royal Mint issued the first coins in an ongoing series, inspired by the magical world of Harry Potter. We've got all the details on the first collection as well as what we can expect from the eagerly anticipated 25 Years of Magic series.

2022 marks twenty-five years since the publication of Harry Potter and the Philosopher's Stone (also known as the Sorcerer's Stone in the United States). The first book in J K Rowling's seven-part fantasy series was published in June 1997, inviting readers - young and old - to enter the magical world of Hogwarts.

The story follows Harry Potter as he discovers he's a wizard on his eleventh birthday and spends the rest of his school career fighting the magical supremacist who killed his parents with the help of his pals, Ron and Hermione.

The Harry Potter books are the best-selling series in history. They've been translated into 73 languages and adapted into a series of blockbuster films. Collectors can enjoy a whole range of official and unofficial merch but there's never been an official UK coin featuring The Boy Who Lived: until now.

The first coins in the 25 Years Of Magic collection were released by The Royal Mint last month.

These pieces featured the boy wizard himself, surrounded by twinkling stars. The design also includes a latent, lenticular security image that alternately shows a lightning bolt and the number '25' when the coins are tilted.

The Royal Mint has now officially confirmed that this Harry Potter design will be the first issue in a four-part series. We'd already caught wind of this via a proclamation published in June 2022 in the London Gazette.

Per the Gazette, the next three Harry Potter coins will feature:

The magical designs that appear on The Royal Mint's 25 Years Of Magic coins are based on the work of illustrator Jim Kay. He's the artist behind fully illustrated editions of the Harry Potter books, released by Bloomsbury. Speaking about the prospect of his work appearing on a coin, Kay said:

'It hasn't really sunk in yet. It’s the same for most aspects of publishing – because you are on your own all of the time in a studio, none of it quite seems real until you see the book on a shelf in a shop. Then you think 'oh yeah! I did that!' This is completely new to me though, a coin!'

Kay's designs have been adapted for coinage by Ffion Gwillim, a product designer at The Royal Mint.

It's the coins with colour-printed detail that best capture the charm of Jim Kay's designs: you can see this feature on the Harry Potter silver proof 50ps which comes in a special acrylic display case. Detailed information booklets included with the proof coins contain further illustrations.

Will a portrait of King Charles III appear on Harry Potter 50ps?

It seems that the first coins in the 25 Years Of Magic series were manufactured before the passing of Her Majesty the Queen. Elizabeth II was succeeded by her son, King Charles III, on 8 September 2022.

That means that coins from the first collection, featuring Harry Potter, show Jody Clark's portrait of the Queen to the obverse.

The Royal Mint has now announced that the next issue will also use Clark's portrait. The subsequent two releases (Professor Dumbledore and Hogwarts School) will feature Martin Jennings' portrait of King Charles.

Other ongoing Royal Mint series may well feature the new monarch but 25 Years of Magic is the first to be confirmed.

What 25 Years of Magic coins will be available?

You'll be able to collect the four designs on a comprehensive range of coins, suitable for all budgets. Each new release will include large gold and silver pieces as well as Fifty Pence coins in gold, silver and BU. In total there are eight different denominations, each with four variants so 32 coins in total.

Previous Royal Mint coins based on beloved children's books have proved incredibly popular. The ongoing Beatrix Potter series appeals both to coin collectors and those with nostalgic memories of her Little Tales. We anticipate that the 25 Years of Magic collection will be a favourite with those who've grown up with J K Rowling's stories.

Adding to the collectibility of these Royal Mint coins is the fact that there are four different designs to collect in metals and finishes to suit every budget.

Several coins in the 25 Years Of Magic series are available in highly limited numbers. Among the rarest pieces in the collection so far are the 22-carat gold Harry Potter 50p with only 300 issued. The silver proof coins - also limited edition - are all sold out on The Royal Mint website but we've still got a small number of the .925 sterling silver 50ps, 1oz and 2oz coins in stock.

When will Harry Potter coins be released?

We don't have release dates yet for the next issues in the 25 Years of Magic range. Though it seems likely that the next coins - featuring the Hogwarts Express - will be available before the end of the year.

A number of countries have issued Harry Potter coins over the years, including The Isle of Man, New Zealand, Gibraltar and The Pitcairn Islands. However, none of these carry UK legal tender status. The Royal Mint’s Harry Potter coins feature four different collectible designs on 50ps and other denominations.

The Royal Mint's new Harry Potter 50ps come in brilliant uncirculated, silver proof and gold proof. The precious metal editions will only be available in small numbers and, as such, will be among the most valuable coins in the 25 Years of Magic range, released in late 2022.

Want to be the first to get hold of a Harry Potter 50p? Create an account with The Britannia Coin Company today and sign up for product alerts for the 25 Years of Magic range. We'll let you know as soon as we have stock of these collectible coins in gold, silver and BU finishes so you can buy without the queue.

The Royal Mint's 25 Years of Magic range is due to be released sometime in 2022, a quarter century after the first Harry Potter book was published in the UK. Sign up for product alerts to get notified when our stock of Harry Potter coins drops. You'll be first in line for Harry Potter 50ps without worrying about the queue.

The Royal Mint's 25 Years of Magic collection has been released to coincide with the twenty-fifth anniversary of the publication of the first Harry Potter book which introduced the boy wizard to the world. The collection is extensive and includes BU 50ps and limited edition gold proof coins, all featuring four collectible designs.

The Royal Mint's 25 Years of Magic range contains coins for every budget from brilliant uncirculated 50ps to 2oz gold coins. The gold coinage in the range is likely to be among the most valuable, thanks to its composition and the fact that very limited numbers of these Harry Potter coins are available.

The Royal Mint is offering Harry Potter 25 Years of Magic coins in BU, silver proof and gold proof. The gold coins are only available in very limited numbers so are likely to be among the most valuable in the 2022 range. The enduring appeal of the Harry Potter series will likely make these coins sought after by collectors.