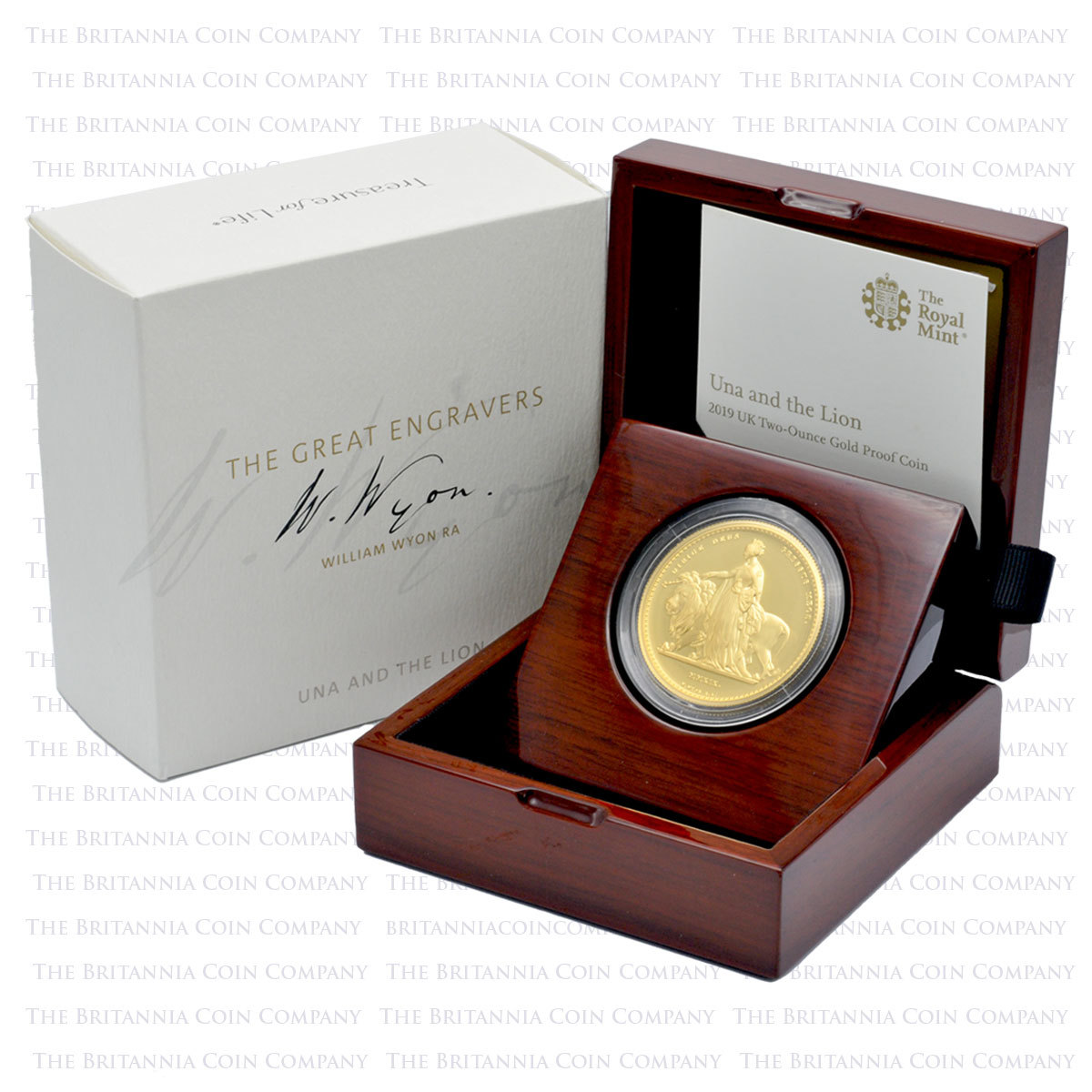 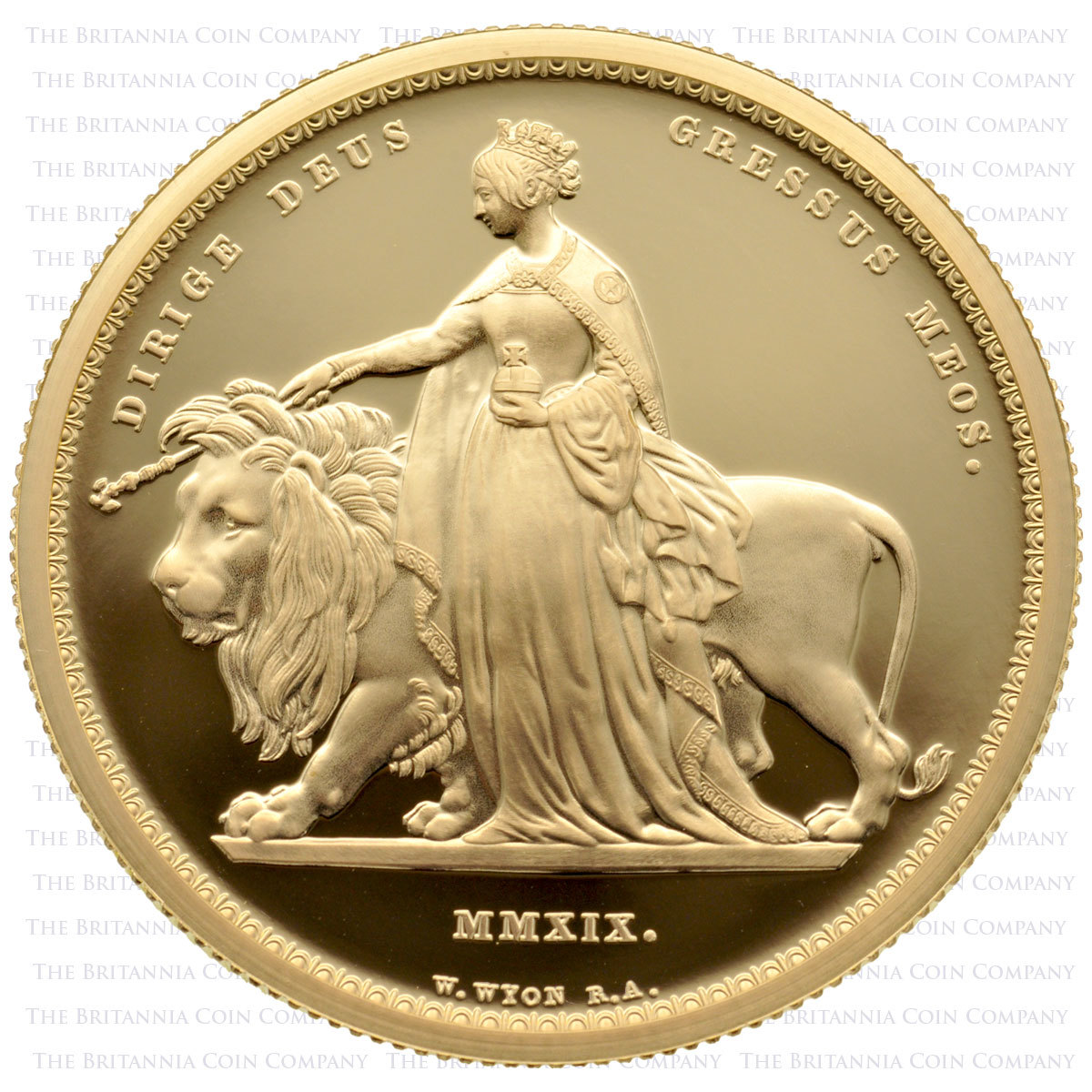 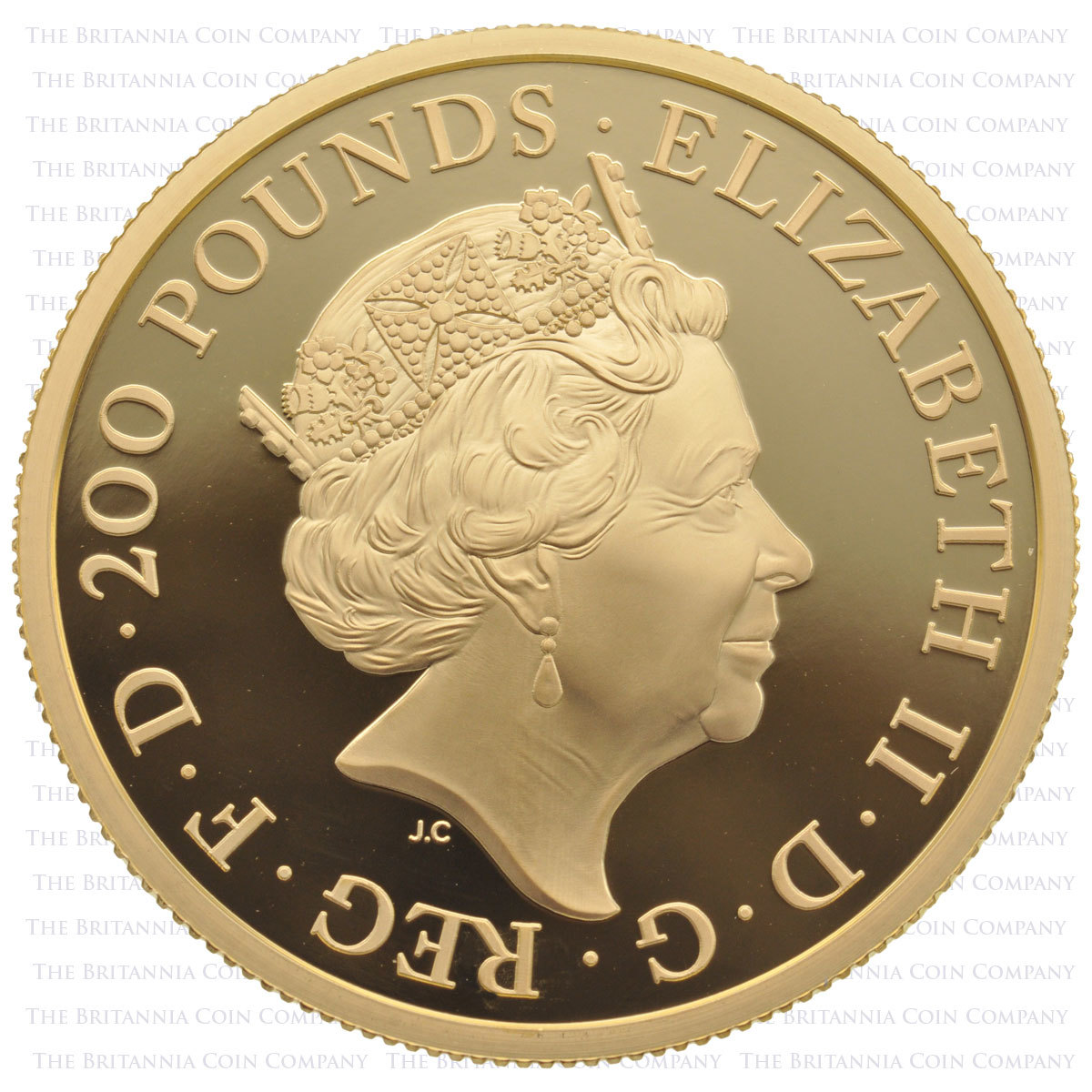 £60,000.00
(VAT Exempt)
List Price: £70,000.00
Gold proof 2oz Una and the Lion coin from The Royal Mint’s sought after Great Engravers series. Just 225 were issued in this presentation in 2019 as the first release in the blockbuster collection which offers exclusive, collectible coinage, modelled after historic numismatic masterpieces. So far The Great Engravers has focused on the work of William Wyon who served as Chief Engraver to the Royal mint in the early part of the nineteenth century. His ‘Una and the Lion’ design initially appeared on a gold Five Pound, dated 1839, issued as part of the first specimen sets of Queen Victoria. The reverse design would have been paired with the artists Young Head of the new Queen and shows Victoria in the guise of Lady Una, a character in Edmund Spencer's epic poem The Faerie Queene. The young woman on the coin guides a lion with her sceptre, interpreted as the lion of England - an important symbol in British heraldry. Very few of the original 1839 coins were struck but this 2019 version gives collectors the opportunity to enjoy Wyon's masterpiece, remastered with the benefit of twentieth century minting technology. This two ounce example is among the most exclusive of the range. It's composed of 31.21 grams of 999.9 (24 carat) gold and has a diameter of 40.00 millimetres. The obverse - which on this edition shows Jody Clark's portrait of Her Majesty Queen Elizabeth II - denotes the face value of this piece as £200 / Two Hundred Pounds. It comes in its original Royal Mint presentation case with a numbered certificate of authenticity.
Quantity
Cost Per Unit
Starts From
1+
£60,000.00
£60,000.00

Regarded as one of the most beautiful coins in the world, 'Una and the Lion' originally featured on a gold Five Pound coin, struck in 1839. These historic coins achieve spectacular prices when they come to the market but why were they issued? And who is Una?

The 1839 gold Five Pound was designed to be part of the first specimen set issued during the reign of Queen Victoria. It was created by an artist at the height of his powers: William Wyon, then Chief Engraver to the Royal Mint.

In an interesting move he choose to depict the young queen - then still in her twenties - as a character from an epic poem called The Faerie Queene by Edmund Spencer. The reverse of the Five Pound shows Victoria in the guise of Lady Una guiding a lion who represents England. This was paired with Wyon's 'Young Head' portrait of the Queen to the obverse.

The Great Engravers Series So Far

Like other famous coinage designs by William Wyon, original Una and the Lion coins are hard to get hold of. Now, this famed design is available to a wider audience with The Royal Mint's Great Engravers series.

The series so far featured hi-lights from William Wyon's career, starting with Una in 2019 then moving on to an earlier design, his Three Graces, created in 1817 for a pattern coin. 2021 saw the first in a two part release celebrating Wyon's 1847 Gothic Crown. All of these reissues have been phenomenally successful, prompting similar releases from the East India Company as well as much speculation about the next release.

How To Buy A 2oz Una Gold Coin

The Royal Mint issued Una and the Lion coins in a range of metals and denominations in 2019. The most exclusive and coveted, of course, were the gold coins, offered in extremely limited numbers.

The two ounce coin is composed of 62.42 grams of 24 carat (999.9) gold. This piece has a diameter of 40.00 millimetres and a face value of £200 / Two Hundred Pounds. The value appears on the obverse alongside a portrait of Elizabeth II by Jody Clark.

This example comes in its original presentation packaging and capsule from The Royal Mint with a numbered certificate of authenticity enclosed.

Sell Your Una And The Lion Coin

We're interested in buying 2019 Una and the Lion coins in gold and silver as well as other limited edition coins in the Great Engravers series (plus other modern and historic coins from anywhere in the world. Visit our Sell Your Coins page for more information.