First struck in 1820, the Double Sovereign is a large and prestigious British gold coin. Both historic and modern Double Sovereigns are composed of 15.98 grams of 22 carat (916.7) gold which equates to a fine gold content of .4708 troy ounces. Double Sovereigns have a face value of Two Pounds but - like the smaller 'full' gold Sovereign - they do not display their denomination. Collectors recognise Double Sovereigns by their distinctive design which has commonly featured the image of Saint George to the reverse. 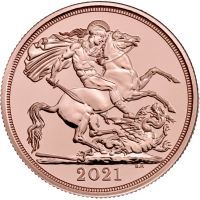 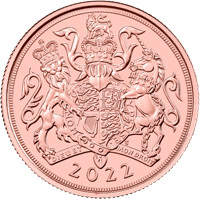 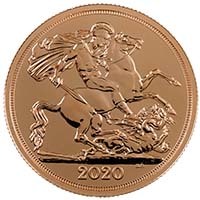 What's better than a gold Sovereign? A Double Sovereign!

The History of Double Sovereigns

The first Double Sovereigns were double-weight piedfort versions of the 15.55 gram gold Sovereigns introduced during the reign of King Henry VII. These extremely rare hammered coins were probably presented to important people rather than being released into circulation.

The same was true of the first modern milled Double Sovereigns, issued in 1820. Double Sovereigns were sporadically struck through the nineteenth century, often in small numbers, making Georgian and Victorian examples particularly collectible.

In the twentieth century Double Sovereigns formed part of coronation proof sets. They have been struck regularly since 1980, generally being offered only in three-coin, four-coin and five-coin Sovereign sets. Lately, The Royal Mint has begun to offer bullion Double Sovereigns, designed for investors.

For the last two hundred years, Double Sovereigns have been struck to the same strict set of specifications.

Each Double Sovereign is composed of 15.98 grams of 22 carat (916.7) gold. This equates to a pure gold weight of 14.85 grams or .4708 troy ounces of pure gold. Double Sovereigns offer twice the amount of gold as their smaller cousin, the 'full' Sovereign, which weighs 7.98 grams. Double Sovereigns are also thicker and larger, boasting a diameter of 28.40 millimetres.

Like other coins in the gold Sovereign family, Double Sovereigns do not name their face value on either obverse or reverse. Collectors recognise these coins thanks to their distinctive specifications. Their instantly recognisable reverse design also makes them easy to identify. The majority of Double Sovereigns minted down the centuries have featured Benedetto Pistrucci's classic image of Saint George, caught in the act of slaying a dragon. This engraving was created for the first modern 'full' Sovereigns and has seen regular use on the Double Sovereign with only a few exceptions.

Traditionally, the image of England's patron saint is paired with the current royal portrait. The earliest Double Sovereigns showed the profile of George III. Modern Double Sovereigns have born a succession of effigies of Queen Elizabeth II, along with a legend that reads: 'ELIZABETH II · DEI · GRA · REGINA · FID · DEF ·'.

Double Sovereigns offer many of the same benefits to investors as other Sovereign coins. As they are composed of investment-grade gold, Double Sovereigns are VAT exempt in Britain and the EU. Their face value - set at Two Pounds - makes them legal tender in the UK which confers a Capital Gains Tax exemption that's important when you come to liquidate your stack.

You'll find that gold buyers the world over recognise these gold coins. Their long history and the prestige of The Royal Mint brand confers trust in Double Sovereigns that makes them easy to sell.

While their 22 carat gold composition makes Double Sovereigns a good way to store wealth, many of these coins demand a price well in excess of spot, thanks to their rarity. Even today very few are minted annually, promoting a healthy collectors market.

Double Sovereigns are technically a Two Pound coin and they share the same general specification as a range of commemorative gold coins from The Royal Mint. Modern gold Two Pound coins have been issued since 1986. In the last couple of decades these gold coins have featured a red gold outer ring and a yellow gold inner circle which imitates the bimetallic circulating counterparts and distinguishes them from modern Double Sovereigns. Generally, collectors and sellers consider these two British gold coins separately though both are composed of 15.98 grams of 22 carat gold.

You can browse our selection of £2 coins in gold, silver, brilliant uncirculated and circulated finished on our Two Pound coins page.

How To Sell A Gold Double Sovereign

Whether you've got a single Double Sovereign or several gold coins to sell, we're happy to provide you with a no obligation quote.

The Britannia Coin Company buys Sovereigns at our precious metals counter in Royal Wootton Bassett as well as operating a sale-by-mail service, meaning you can get an industry leading price for your old coins from home. Visit our Sell Your Coins page for more information or contact us for a valuation.