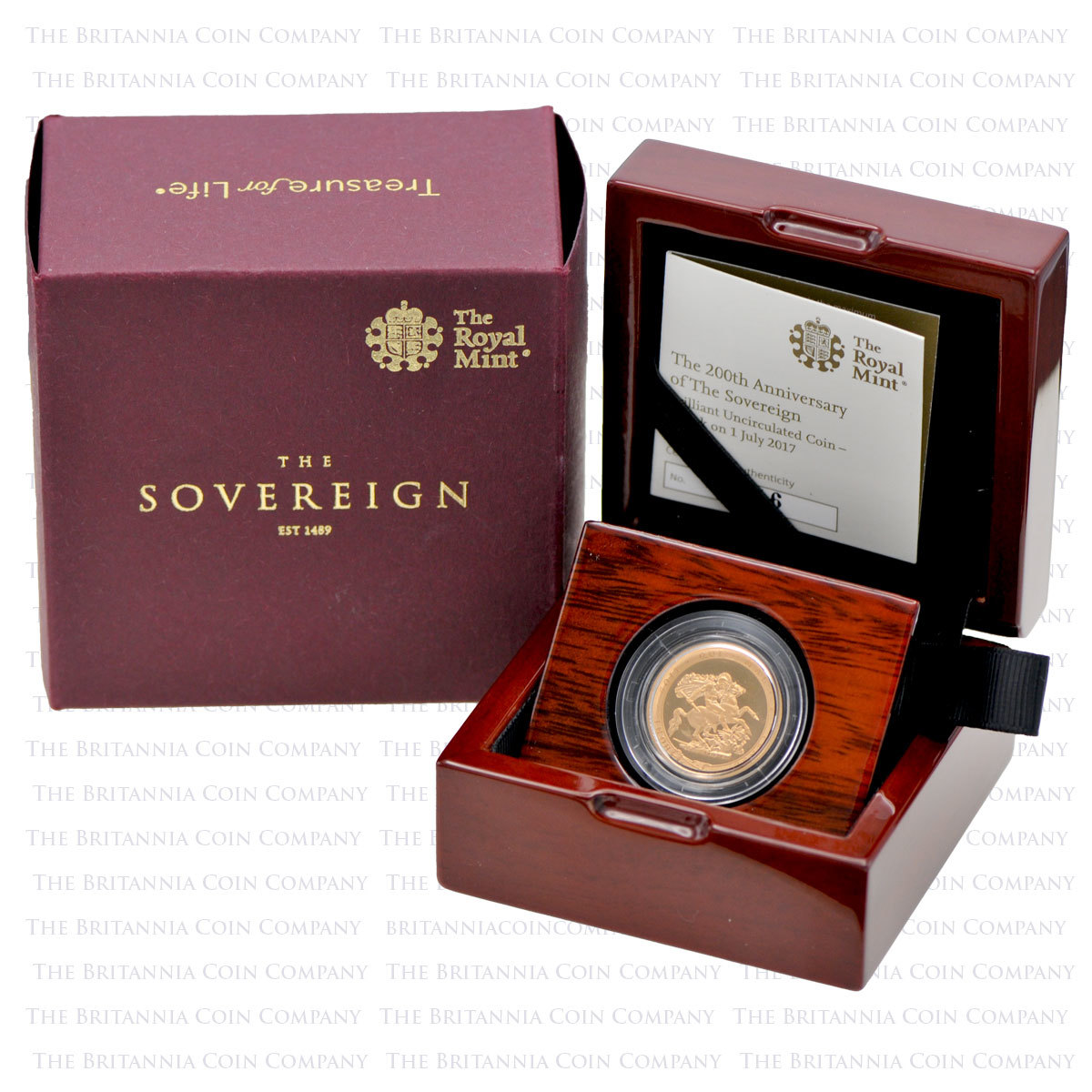 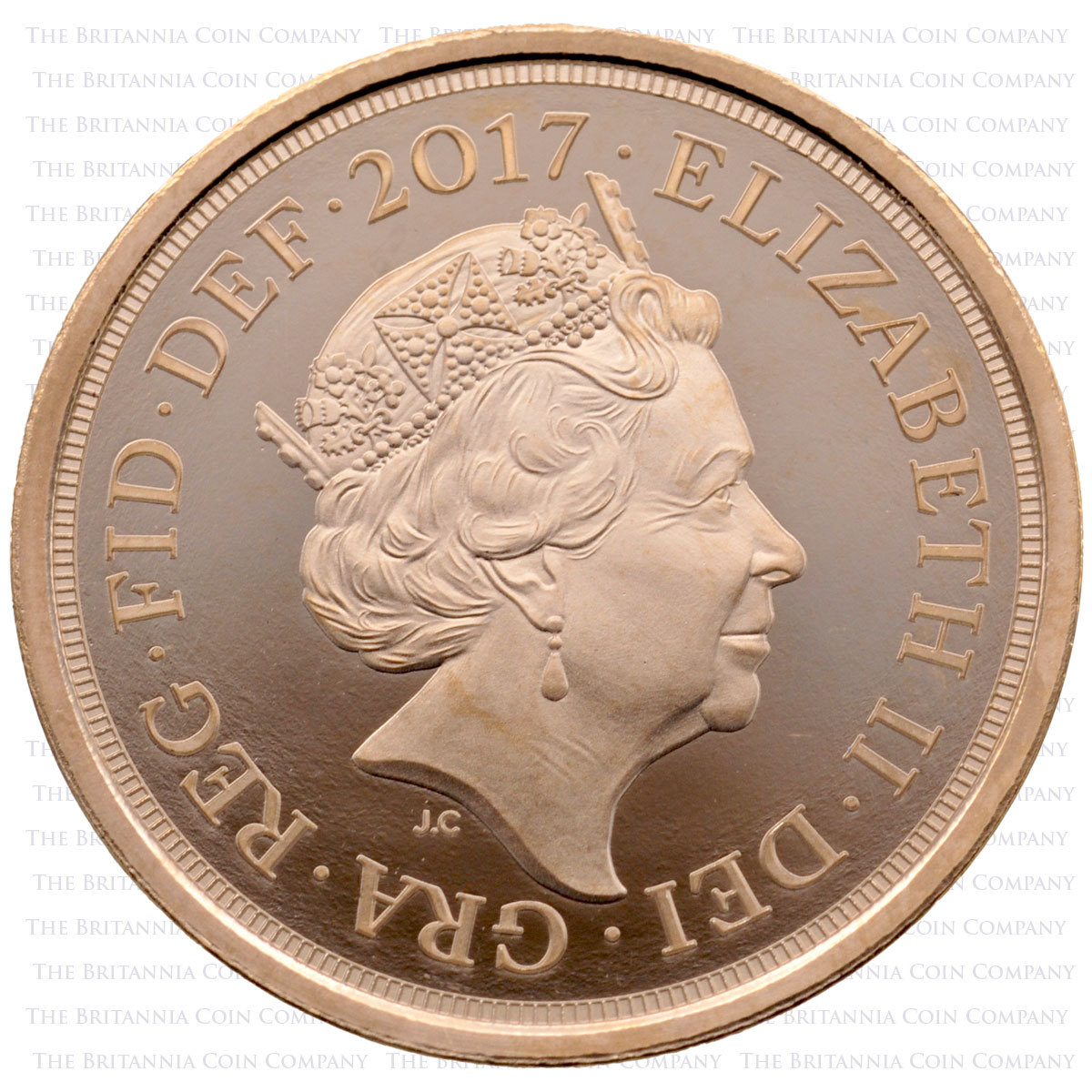 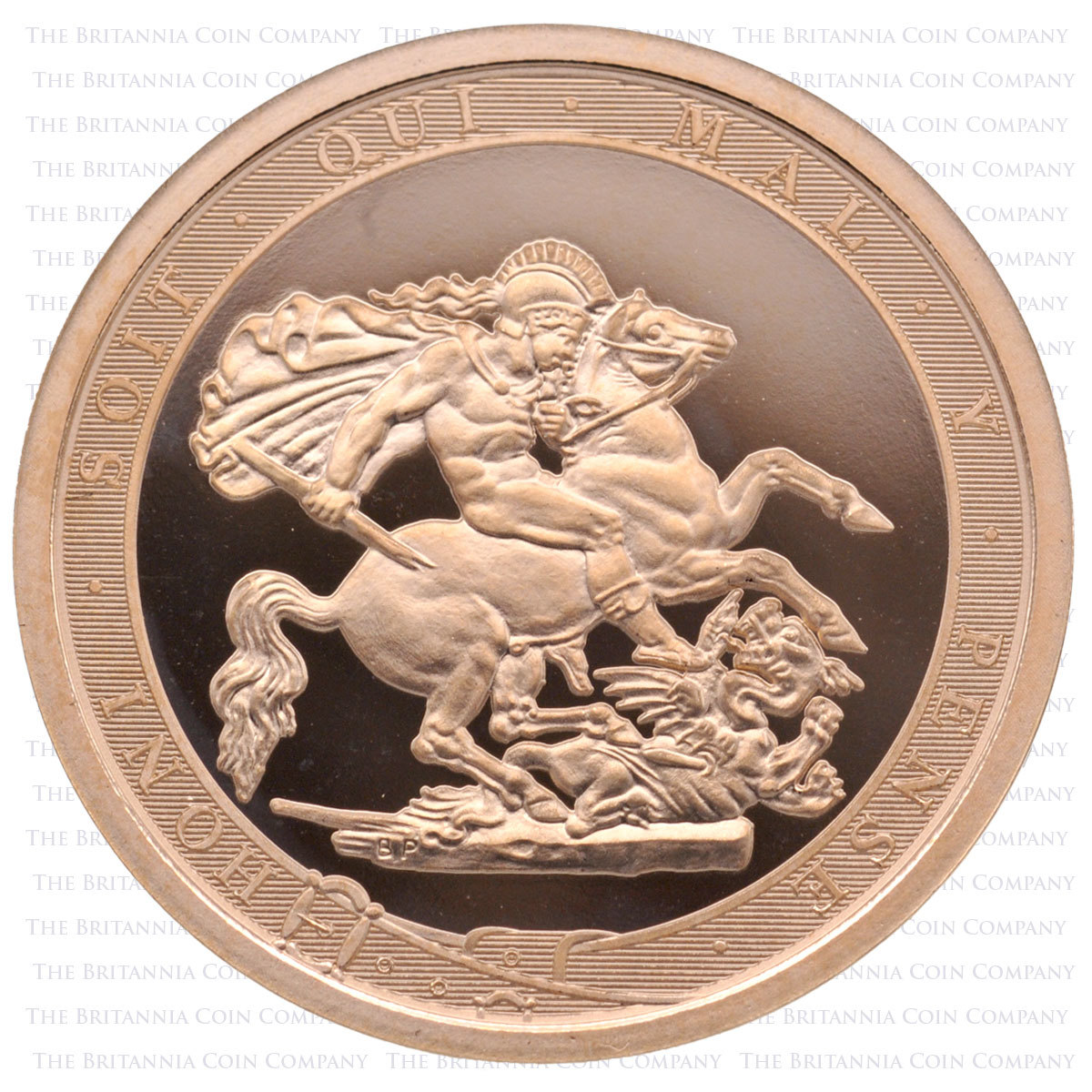 from
£1,095.00
(VAT Exempt)
1 July 2017 marked 200 years since the first modern Sovereigns were struck. These coins were introduced in 1817 in the wake of the Napoleonic Wars reviving the name of an older Tudor hammered gold coin. When they were first issued, gold Sovereigns featured a reverse by Benedetto Pistrucci showing England’s patron saint, St George slaying a cowering dragon, the motif encircled by a decorative garter. For later Sovereigns the garter was removed and Pistrucci’s design in this form has become a perennial presence on these gold coins. For the bicentennial of the Sovereign, The Royal Mint has revived the historic engraving, adding the garter detail to the reverse of their 2017 proof Sovereigns. This is paired with Jody Clark’s portrait of Her Majesty the Queen on these ‘struck on the day’ Sovereigns and on the rest of the coinage in the 2017 proof Sovereign family. Just 1,817 of these limited edition brilliant uncirculated Sovereigns were issued and this one comes in it is original presentation packaging with a numbered certificate of authenticity enclosed. Each coin is composed of 7.98 grams of 22 carat (916.7) gold and has a diameter of 2205 millimetres, following the exacting specifications laid down two centuries ago.
Log in to get notified when this product is back in stock.
Track Product
You are not logged in. Please Login to track this product.
Description Summary Specification Royal Mint About us

Strike of the day Brilliant Uncirculated 2017 Sovereign, celebrating 200 years since the first modern Sovereigns were minted.

The History Of The Gold Sovereign

The earliest Sovereigns were struck during the reign of Tudor king Henry VII. Centuries later, a new gold coin bearing this name was introduced, following a major overhaul of British coinage. This Sovereign, first minted in 1817, established specifications that are still strictly followed today.

1 July 2017 marked 200 years since a royal proclamation ordered the very first modern Sovereigns. To celebrate this momentous anniversary, The Royal Mint authorised a rare 'struck on the day' Sovereign in a brilliant uncirculated finish.

The reverse recreates the original variant of Benedetto Pistrucci’s iconic Saint George motif, as used on the 1817 Sovereign. While most modern Sovereigns feature only the mounted patron saint, dragon and date to the reverse, the earliest Sovereigns enclosed this design within a stylised garter.

This design was also utilised for 2017 proof Sovereigns. The struck on the day BU 2017 Sovereign is distinguished by a plain edge.

The obverse shows Jody Clark's portrait of Her Majesty the Queen: the fifth such official effigy used on her coinage.

Your 2017 BU Sovereign is offered in its original packaging from The Royal Mint. This consists of a maroon card box and a glossy wood presentation case within which the coin is situated in a protective capsule. Also included: a numbered certificate of authenticity.

What other Sovereign options are available: