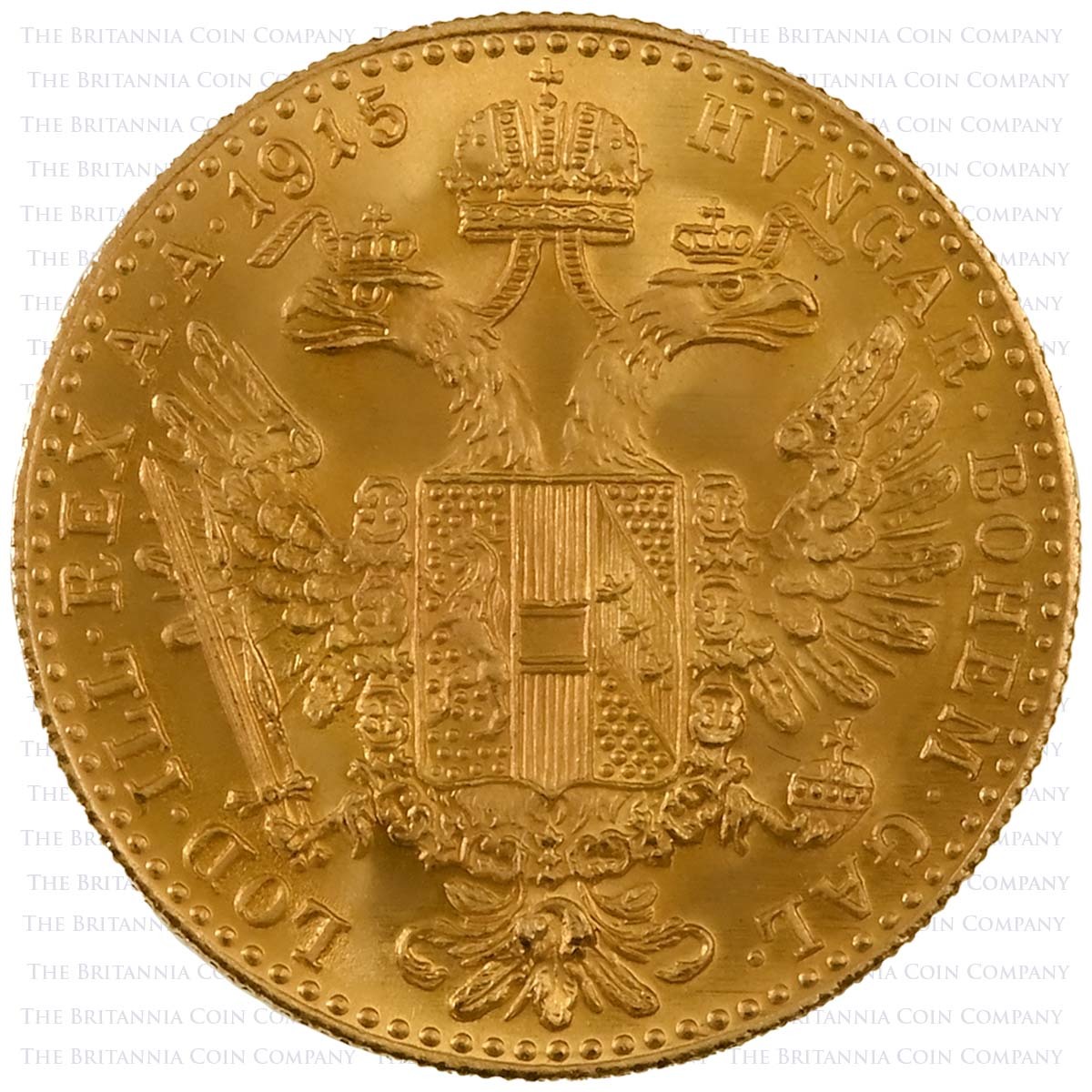 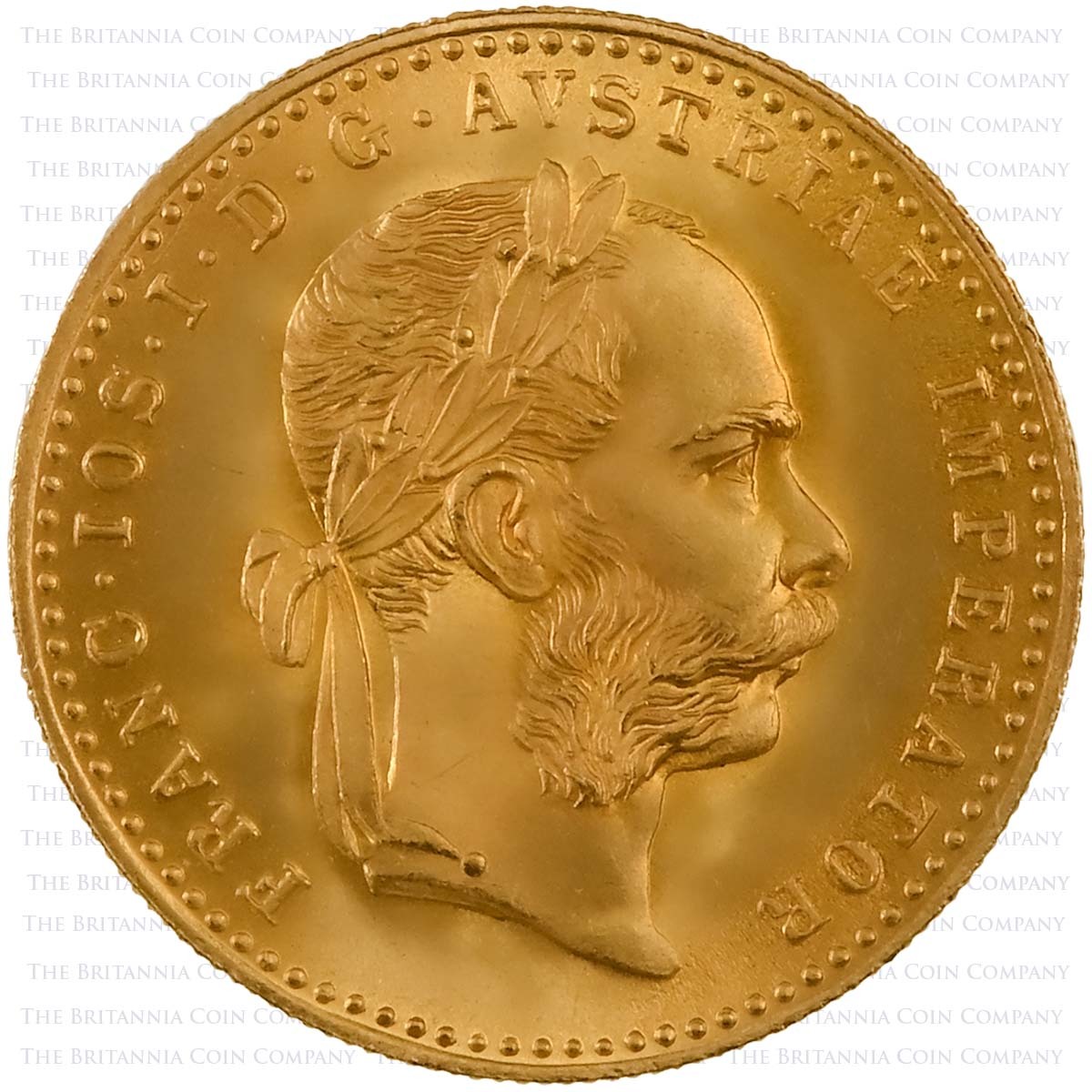 from
£184.46
(VAT Exempt)
23.75 carat gold 1915 restrike Austrian One Ducat coins from the Austrian Mint at our best value price. The obverse of these gold bullion coins shows the laureate bust of Emperor Franz Joseph I, identifiable thanks to his trademark mutton chops. This portrait is the work of Austrian medallist and sculptor Josef Tautenhayn. The reverse features a double-headed Imperial eagle, it’s wings raised, talons holding sword, sceptre and orb. On the eagles chest are the marshalled arms of Habsburg, Babenberg and Lorraine. This design is also attributed to Tautenhayn and was first struck in 1872. The reverse legend bears the date ‘1915’ but these are restrike coins, still issued by the Münze Österreich for the global investment market. One Ducat coins are composed of 3.50 grams of 98.6% gold: much finer than most historic bullion coins. Actual gold weight: 3.45 grams or 0.1106 troy ounces. They measure 22.00 millimetres in diameter and are surprisingly thin, their milled edge measuring just .70 millimetres. We’ll supply your VAT free 1915 1 Ducat in good bullion condition, each piece carefully authenticated by our expert team.
Log in to get notified when this product is back in stock.
Track Product
You are not logged in. Please Login to track this product.
Description Summary Specification About us

Buy a restrike 1915 98.6% gold Austrian 1 Ducat coins from The Austrian Mint at our best price.

History Of Gold One Ducat Coins

The first gold Ducats were struck in the 1200s in the city of Venice, designed to facilitate trade. Their name comes from the Medieval Latin 'ducalis' which releases to a duke or dukedom. The Venetians coins were imitated and disseminated widely with coins modelled on the Venetian specification adopted by the Holy Roman Empire in the early 16th century. These Ducats continued to be minted in Hungary under the House of Habsburg, including when the Kingdom was consolidated into the Dual Monarchy in the 19th century.

The final regular issue of gold 1 Ducats was made in Vienna in 1914, production ceasing with the outbreak of World War One. Coins dated 1915 are restrike issues, produced later in significant quantities by the Münze Österreich (Austrian Mint) for the global investment market. Their long history makes these restrike 1915 Ducats one of the oldest gold bullion coins in the world. They are similar to another Austrian bullion coin, Maria Theresa silver Thalers, continuously struck for centuries with a 1780 date.

Portrait Of Emperor Franz Joseph I

You'll find a right-facing portrait bust of Emperor Franz Joseph I on the obverse of these gold 1 Ducat coins.

A member of the Hapsburg Dynasty, Franz Joseph was Emperor of Austria and King of Hungary from 1848 until his death in 1916 making him one of the longest-serving monarchs in history. During his reign, the Austro-Hungarian Empire became a great power in Central Europe, ruled from Vienna. Franz Joseph's heir was Archduke Franz Ferdinand whose assassination in 1914 triggered the First World War. Frans Josephs's own death preceded the collapse of the Empire following its defeat in 1918.

This portrait of the Emperor by Austrian medallist and sculptor Josef Tautenhayn (1837-1911) was first struck in 1872. It shows Franz Joseph wearing a crown of laurels and sporting his trademark mutton chop moustache. The legend around reads: 'FRANC · IOS · I · D · G · AUSTRIAE · IMPERATOR'.

The reverse of these 1915 gold coins features the Imperial coat of arms of the Austrian Empire. This composition incorporates the black double-headed eagle - the Reichsadler - derived from the arms of the Holy Roman Emperors. The bird is shown with its wings spread, holding sword and a sceptre in one claw and an orb in the other. Above the twin heads is the Imperial Crown of Austria with trailing ribbons. On the eagle's chest is a shield bearing the marshalled arms of Habsburg, Babenberg and Lorraine, encircled by the a chain bearing the Order of the Golden Fleece, a Catholic order of chivalry, founded in 1430.

Austrian Ducats have a high gold content compared to other historic bullion coins. They're composed of 98.6% pure gold: that's 23.75 carats. By comparison, French 10 Franc coins are struck in 90% (21.6-carat) gold while UK gold Sovereigns only boast a 22-carat (91.67%) fineness. 1915 Ducats were always intended as investment coins. As they were not produced for circulation there was no need to choose a stronger alloy to stand up to wear and tear.

Each of these gold restrike coins has a total mass of 3.50 grams and a diameter of 20.00 millimetres. You'll find that these coins are fairly thin, their milled edge measuring just .70 millimetres.

The size and gold content of 1915 One Ducats is comparable to the Half Sovereign or the 1/10oz South African Krugerrand but not exactly: these coins are pretty unique in the world of gold bullion.

There's a range of reasons that Austrian 1915 Ducats make a great addition to your stack:

We offer these restrike coins in good bullion condition, meaning you're guaranteed an attractive coin that might show the typical minor bag marks and limited wear associated with investment coins. None of these factors impacts their appeal or gold weight which is checked by our expert team using XRF technology.

How To Sell An Austrian One Ducat

Are you looking to sell a 1915 1 Ducat? We buy these gold coins along with bullion coins and bars from around the world for market-leading prices. Simply fill out the form on our Sell Your Coins page to get a custom quote fast. 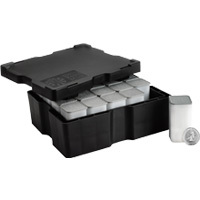 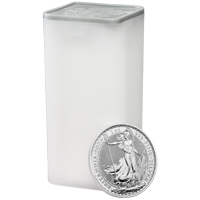 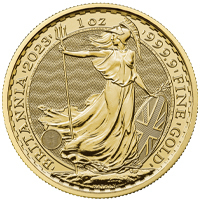 1 Ducat coins are a historic gold bullion coin issued by the Austrian Mint. These coins all bear a 1915 date though they were produced much later using designs from a coin issued during the reign of Austro-Hungarian Emperor Franz Joseph I. These coins weigh 3.50 grams and are composed of 23.75 carat gold.

All 1 Ducat coins struck in 1915 are restrikes, made by the Austrian Mint decades after that date. Original Austrian Ducats with a similar specification were struck annually in Vienna between 1872 and 1914. These restrike coins were issued years afterwards with a 1915 date, just like silver Maria Theresa Thalers.

There are 3.45 grams of gold in a 1915 Austrian 1 Ducat coin. That’s 0.1106 troy ounces. These restrike coins are made from 98.6% (23.75 carat) gold making them one of the finest historic bullion coins on the market, sought after by investors looking to add interest to their precious metals portfolio.

Austrian One Ducats are one of the oldest and most trusted of the world's bullion coins. Dated 1915, these coins are struck in 3.50 grams of 23.75 carat (98.6%) gold giving them an actual gold weight of 3.45 grams. They’re VAT free and an attractive addition to any investment portfolio with a district historic appeal.

Looking to sell your 1915 gold 1 Ducat coins? The Britannia Coin Company is keen to by these historic Austrian restrike coins now. They’re made of highly-pure 23.75 carat gold and a struck by the Austrian Mint in Vienna. Visit our Sell Your Coins page to get a custom valuation for your Austrian 1 Ducats today.