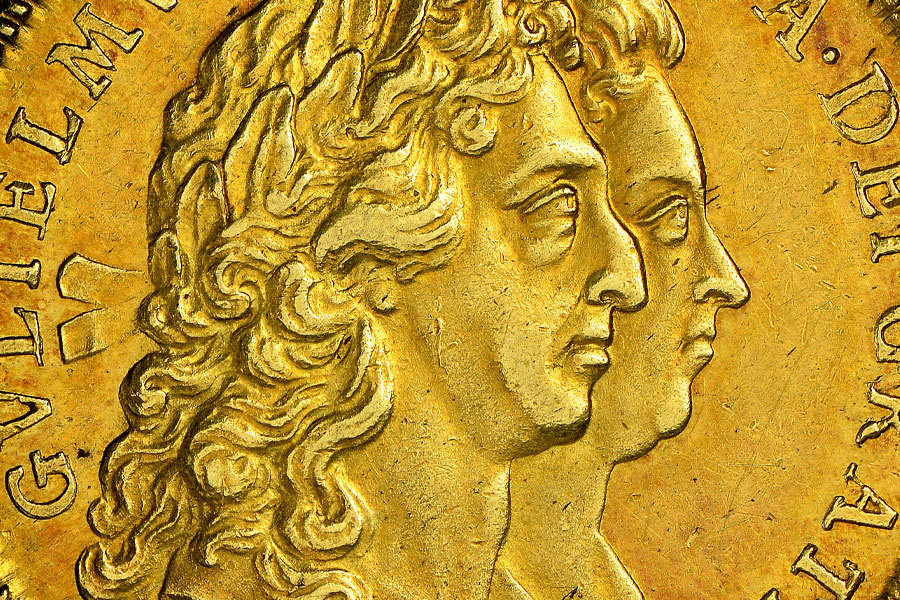 The story of Mary and William and their coinage began with a princess who didn’t think much of her suitor.

Daughter of King James II, the young and beautiful Mary was sent away from England to the Netherlands when she was just 16. She was to marry her cousin, the Prince William of Orange, who was less than attractive. It's believed Mary cried for a full two days about the arrangement.

But, living in the Netherlands together, love grew from the political union, and it wouldn’t be too long until Mary got to return to her home country after all.

11 years after Mary moved to the Netherlands to marry William, England was seeing some unsavoury changes. King James II was catholic and annoyed many with his views. Up until this point, it was Mary, James II’s first born and a protestant, that was first in line for the throne. In 1688, however, James II had a son with his second wife, Mary of Modena, leaving many fearing that the son would become the next catholic king.

A group of protestant nobles went to Holland and appealed to William and Mary to invade England. In the end, they did just that. After landing in Devon, flanked by their troops, many defected to their side. Now without support, James II fled and William and Mary became England’s new monarchs.

With William and Mary taking to the throne as a package deal, the designs that were struck onto coins had to change. Not wanting to stray from the old Greek and Roman coinage style, it was decided that they’d both be represented on their coins, with William’s bust in front and Mary’s behind, both of their profiles clearly displayed.

John Roettier, the famous engraver, designed a coronation medal upon William and Mary’s joint coronation. The medal featured the king and queen’s busts facing to the right on the front of the coin and a figure of Cupid on the back, gazing down from a cloud with arrows in hand.

The new monarchs’ coinage made big changes to that of James II’s. They introduced five and two guinea coins that were highly decorated and guinea and half guinea coins that were slightly less so. The half crowns, on the other hand, became quite plain. Their silver crowns bore both of their initials – a W and and M intertwined within the angles of the shields.

A few coins of James II’s did continue to be minted, however: the striking of the half-penny and farthing in tin persisted until 1692.

The Coinage of a Lonely King

In December of 1694, Mary died of smallpox, leaving William brokenhearted and alone. The coinage needed to be redesigned once again. The following year, the designs struck into the coins reverted back to the more familiar single portrait, showing King William alone. The gold coin also returned to its design showing the cruciform shield with sceptres protruding from each angle.

In 1696, two years after Mary died, it was decided that all hammered coins that were still in circulation were to be replaced, setting in motion the recoinage of 1701. It was in fact Isaac Newton, more widely known now for being an astronomer, who was Warden of the Mint at the time and the person who oversaw the whole process.

Naturally, this was quite a big task so the Tower Mint also opened mints in York, Chester, Norwich, Exeter and Bristol to help produce the new coins. Crown coins were produced at the Tower Mint as it was home to the heavier presses that were needed for the Crowns, while the sixpence, shilling and half-crown were produced at the branch mints. To this day, you can determine where each coin was minted by identifying the mint’s first letter beneath the king’s bust.

It was just a year later that William died, welcoming in a new monarch and a new portrait to adorn England’s coins.

Born in 1662, Mary was the daughter of King James II and Anne Hyde.

William also came from a royal background – though he eventually reigned as king of England, Scotland and Ireland, he was Dutch and was part of the House of Orange. He had the title of Prince of Orange from birth, after his father died just weeks before he was born.

Mary’s father, King James II, upset many people with his staunch Catholic beliefs. After he had a son with his second wife, many people in Britain feared that his son would become another Catholic king.

William and Mary invaded the country and gained the support of many people, leaving the king little option but to flee. His absence was taken as his abdication and so William and Mary took to the throne as joint monarchs.

William and Mary became king and queen in 1689. Their joint reign didn’t last long, however. Five years later, in 1694, Mary died of smallpox, after which William continued to reign until his own death in 1702.

No, William and Mary didn’t have any children. Mary suffered a miscarraige early on in the marriage due to long term illness and the couple was unable to produce an heir to the throne.

William and Mary were first cousins. Mary’s father, James II and William’s mother were siblings, both children of Charles I. 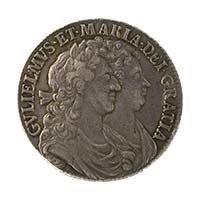