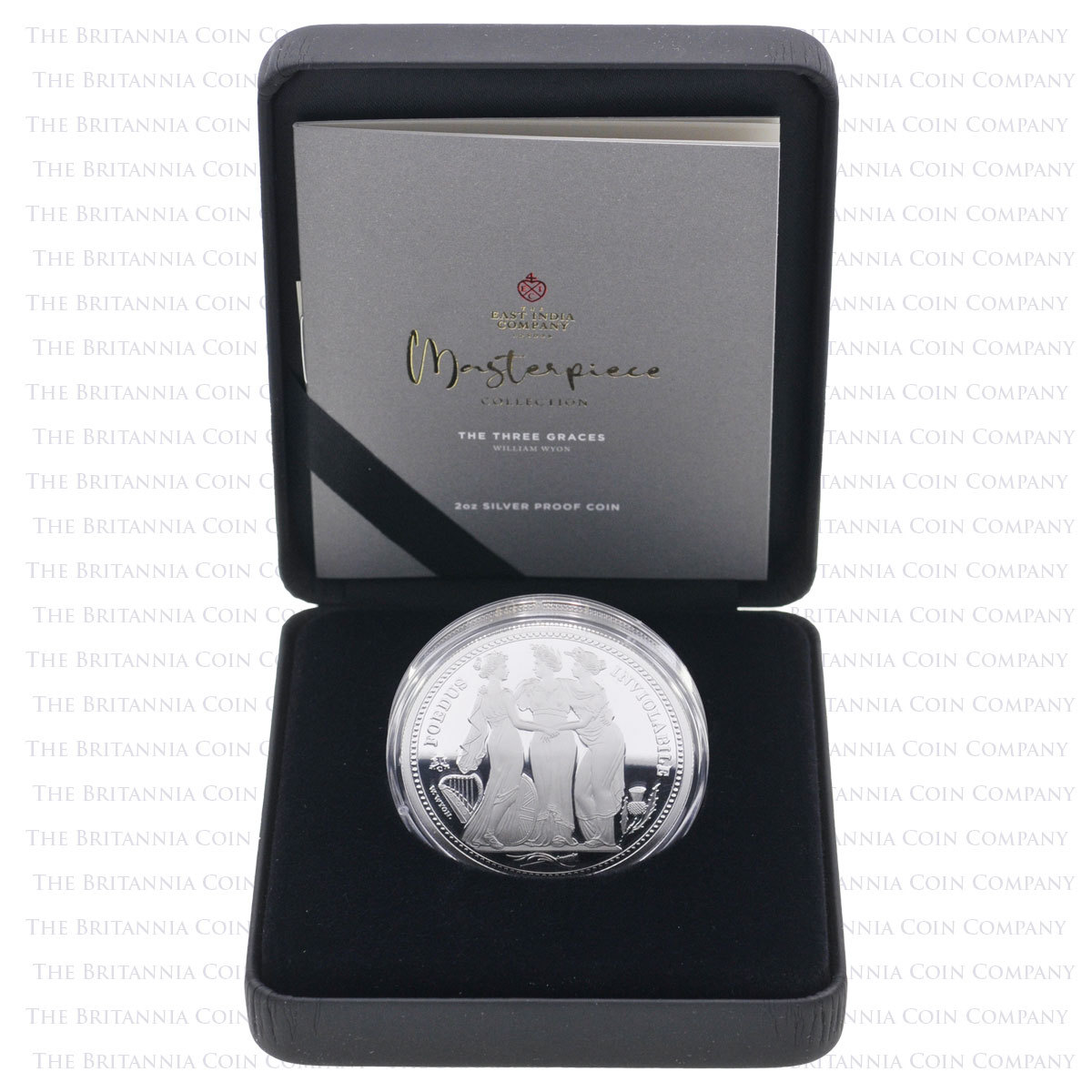 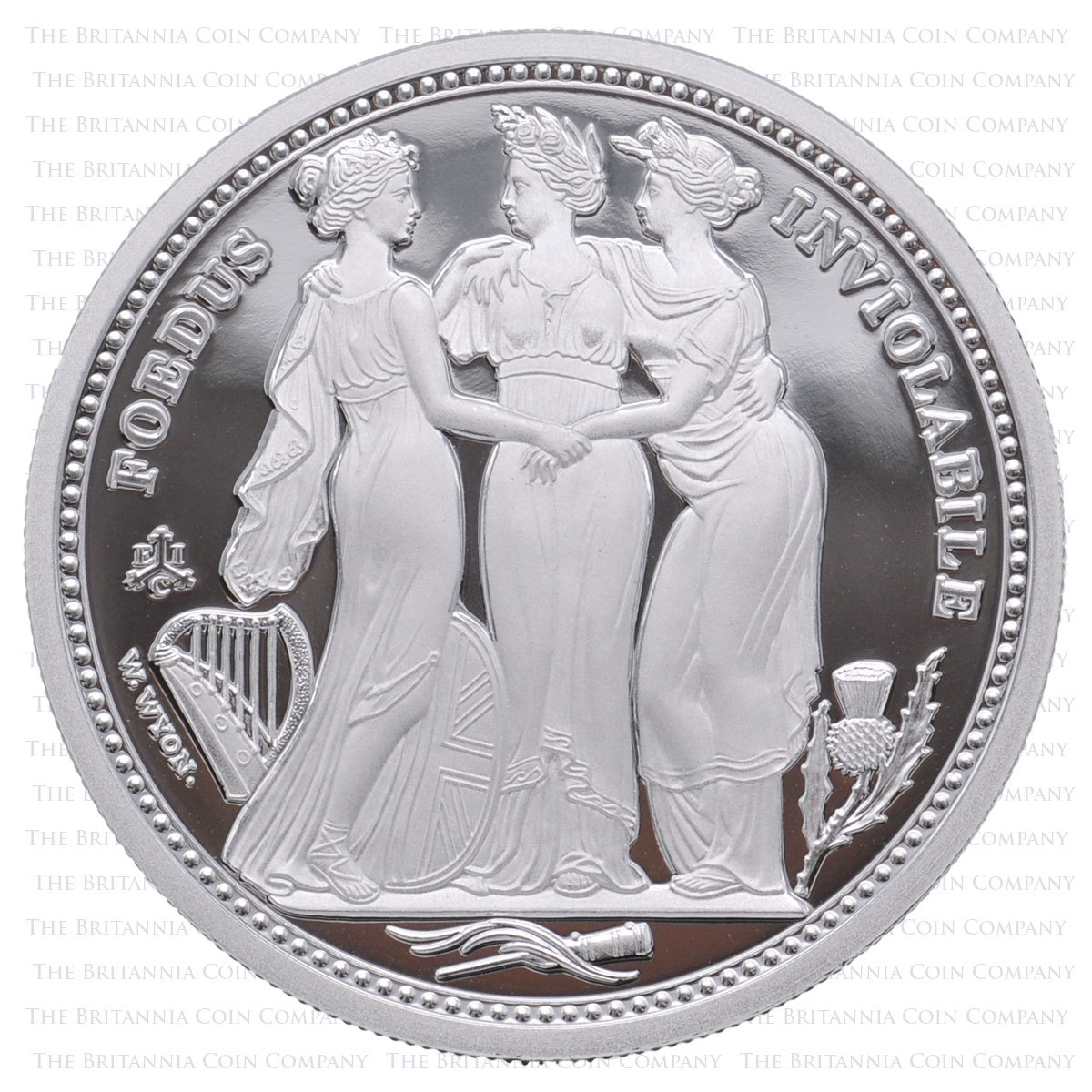 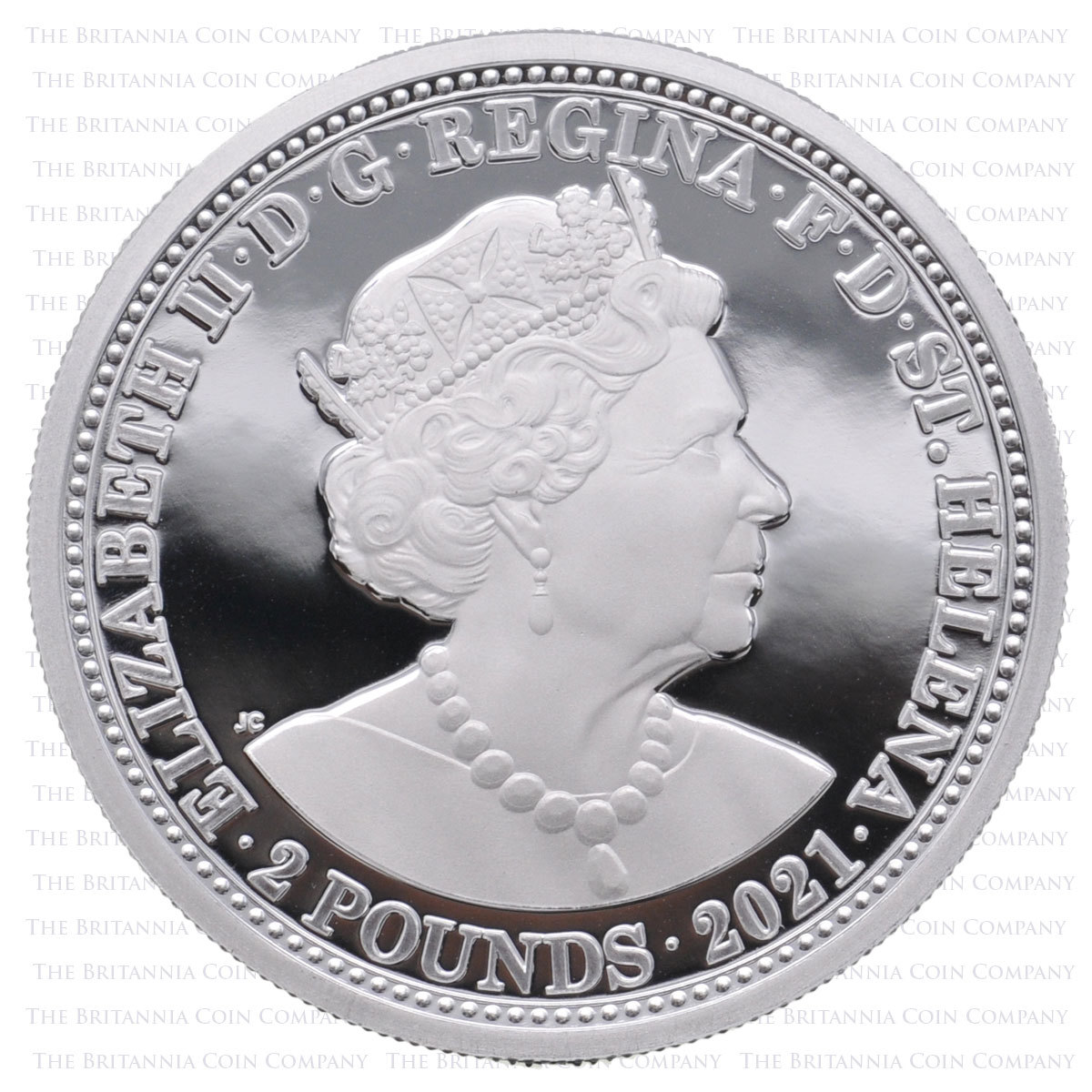 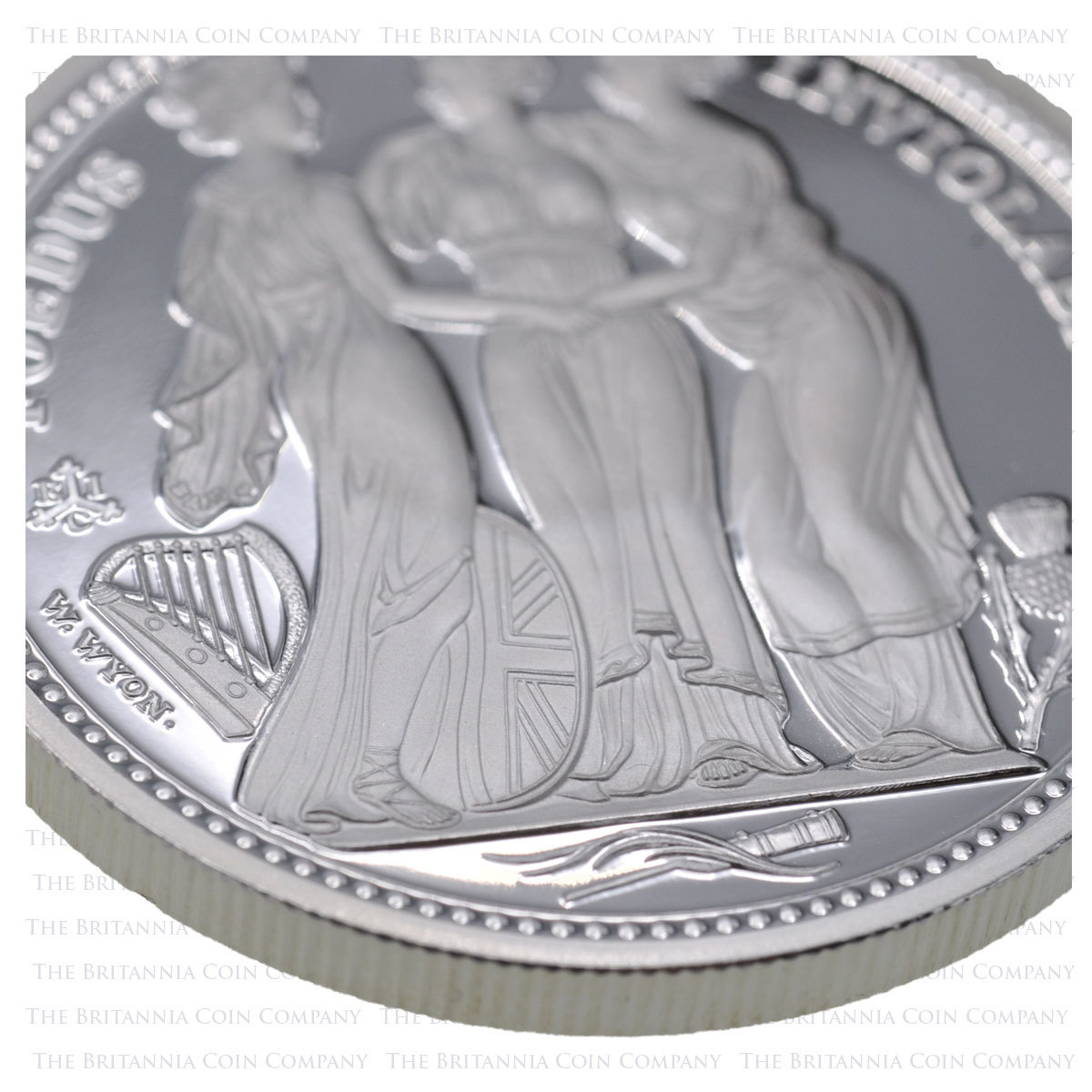 from
£199.00
The first release in The East India Company’s Masterpiece Collection, featuring William Wyon’s beautiful 1817 Three Graces pattern. Offered here in two ounces of .999 fine silver, struck to proof standard with a face value of Five Pounds. One of only 2,500 minted in cooperation with the Issuing Authority of Saint Helena. Your 2 Oz Oz Silver Proof Three Graces is offered encapsulated in its original packaging with a numbered certificate of authenticity.
Quantity
Cost Per Unit
Starts From
1+
£199.00
£199.00
Track Product
You are not logged in. Please Login to track this product.
Description Summary Specification About us Reviews

Struck in 2 Oz of .999 fine silver, this proof coin is your chance to own William Wyon’s beautiful 1817 design, known as the Three Graces.

The original Three Graces was the work of renown Royal Mint engraver William Wyon (1795- 1851). He is remembered for his impressive output, including the 'Young Head' of Queen Victoria - much loved by the monarch - and the gorgeous Una and the Lion which has recently been reproduced as part of The Royal Mint's Great Engraver's series.

Wyon minted the Three Graces design as a pattern coin in 1817, crafting the now legendary coin in his spare time between official commissions. It represents an early work of a rightfully acclaimed artist.

The reverse of the original pattern coin, reproduced here using time-tested techniques, shows three female figures, representing Ireland, England and Scotland. The implements at their feet are symbols of their homelands: a harp, a thistle and a shield bearing St George's cross. This charming engraving is an idealised representation of the relationship between the three nations.

William Wyon was inspired by the Neoclassical trend in decorative arts, garbing his Three Graces in classical dress, evoking by this the three charities of ancient Greek mythology: Euphrosyne, Aglaea and Thalia.

The original Three Graces coin held an effigy of George III on its obverse. On this 2021 silver issue, this is replaced with a portrait of Her Majesty the Queen by Jody Clark. This is different to the bust by the same artist that has appeared on circulating coinage since 2015 but is similarly regal.

Founded to explore the mysteries of the east, The East India Company is a byword for the Age of Sail and Empire.

Since 2012 The East India Company has been minting coins in partnership with the Issuing Authority of Saint Helena and with the Royal Approval of Queen Elizabeth II. Struck in extremely limited numbers and to an impeccable standard, coins from The East India Company often feature reproductions of sought-after heritage designs and the 2021 St Helena Three Graces 2 Ounce Silver Proof is no different in this respect.

You will be able to recognise a Saint Helena 2021 Three Graces by the unique 'EIC' mint mark added by The East India Company to the reverse. This is found just above the harp next to the leftmost figure.

This issue is the first in The East India Company's new Masterpiece Collection: celebrating the best of historic coinage design. We are keenly awaiting future additions to this exciting new series, though here at The Britannia Coin Company we can't think of a better choice to start with than the Three Graces.

The 2021 St Helena Three Graces 2 Ounce Silver Proof is struck on one ounce of .999 fine silver and has a diameter of 45 millimetres.

There is no better way to appreciate an engraving like the Three Graces than in finest Silver Proof. The techniques used to produce proof coins ensure that the fine detail of this master-work is reproduced for you to enjoy.

Your coin will arrive encapsulated in its original bespoke packaging from The East India Company with an information booklet and a numbered certificate of authenticity. 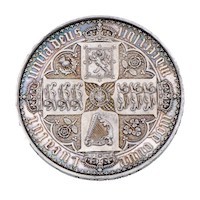 The superb coin arrived very quickly. Can't fault the service.
PAUL R
Top notch service by max and the team as always
Jamue F
I received the nice gold coin safely. Thank you for the quick response. Also, if there is something I like, I will buy it.
kotani h
This is the first time I have purchased from your company and very impressed with the speed and efficiency. The coin I had purchased was already sold out at the Royal Mint, and therefore felt that having to pay just 10% premium was very fair indeed.. I will certainly use Britannia coins again in the future.
John F
Very satisfied all round- will happily use again
Tim J
Easy ordering process and excellent communication and fast delivery. Also great coin !! Could not fault the service of this dealer.
Douglas Jay
Very happy with my purchase. Fast delivery and the coin is in perfect condition. I shall definitely be back for future purchases.
Shane G
Great service
Philip Bowers
I was impressed with all aspects of this transaction : regular delivery updates, fast delivery and careful packaging.
Richard H
Perfect service and product, as always. Simple to order, good price, super fast dispatch and the coin is perfect in hand. Thanks!
Nadine P
This website uses cookies to ensure that you have the best experience. Read our Privacy Policy and Terms and Conditions for more information.