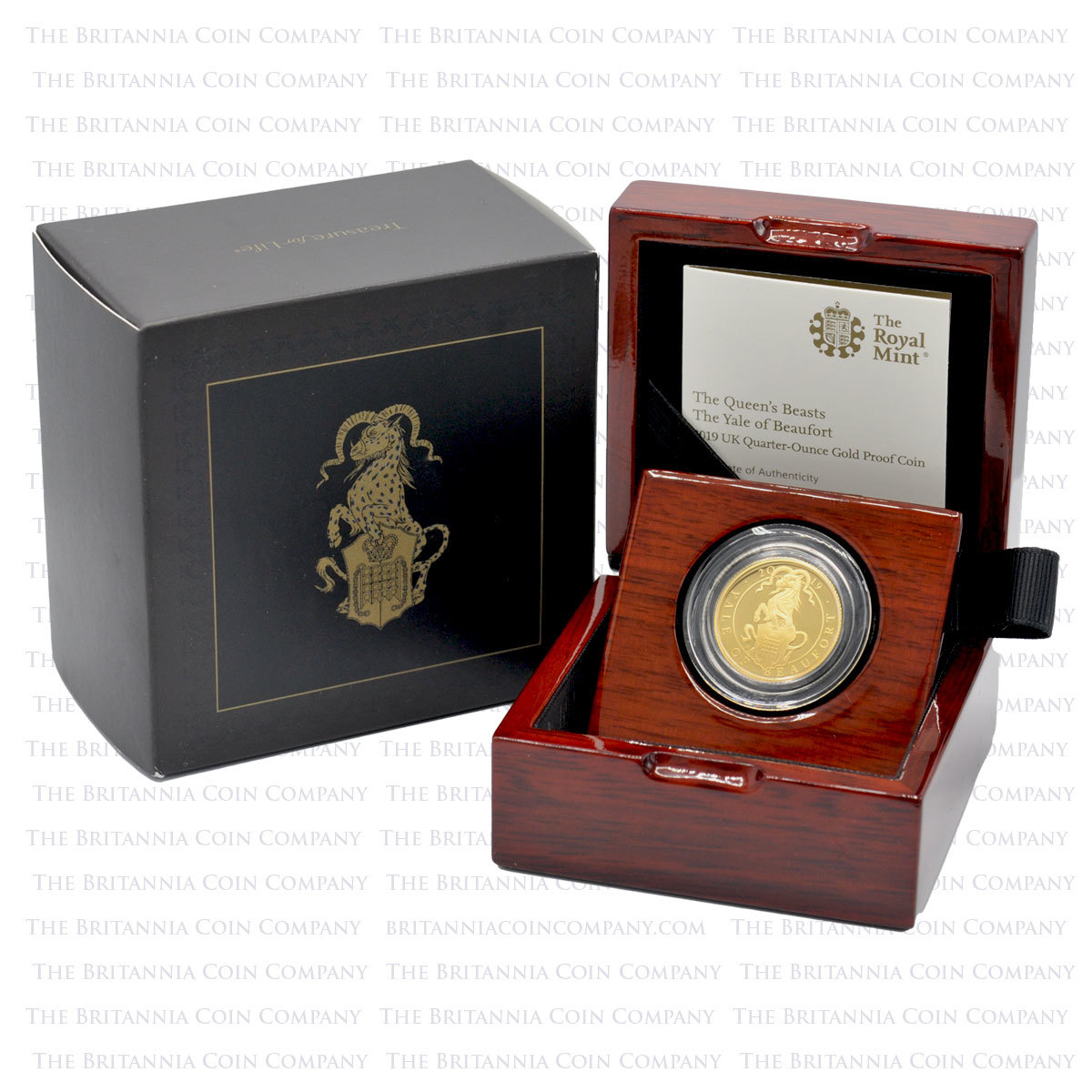 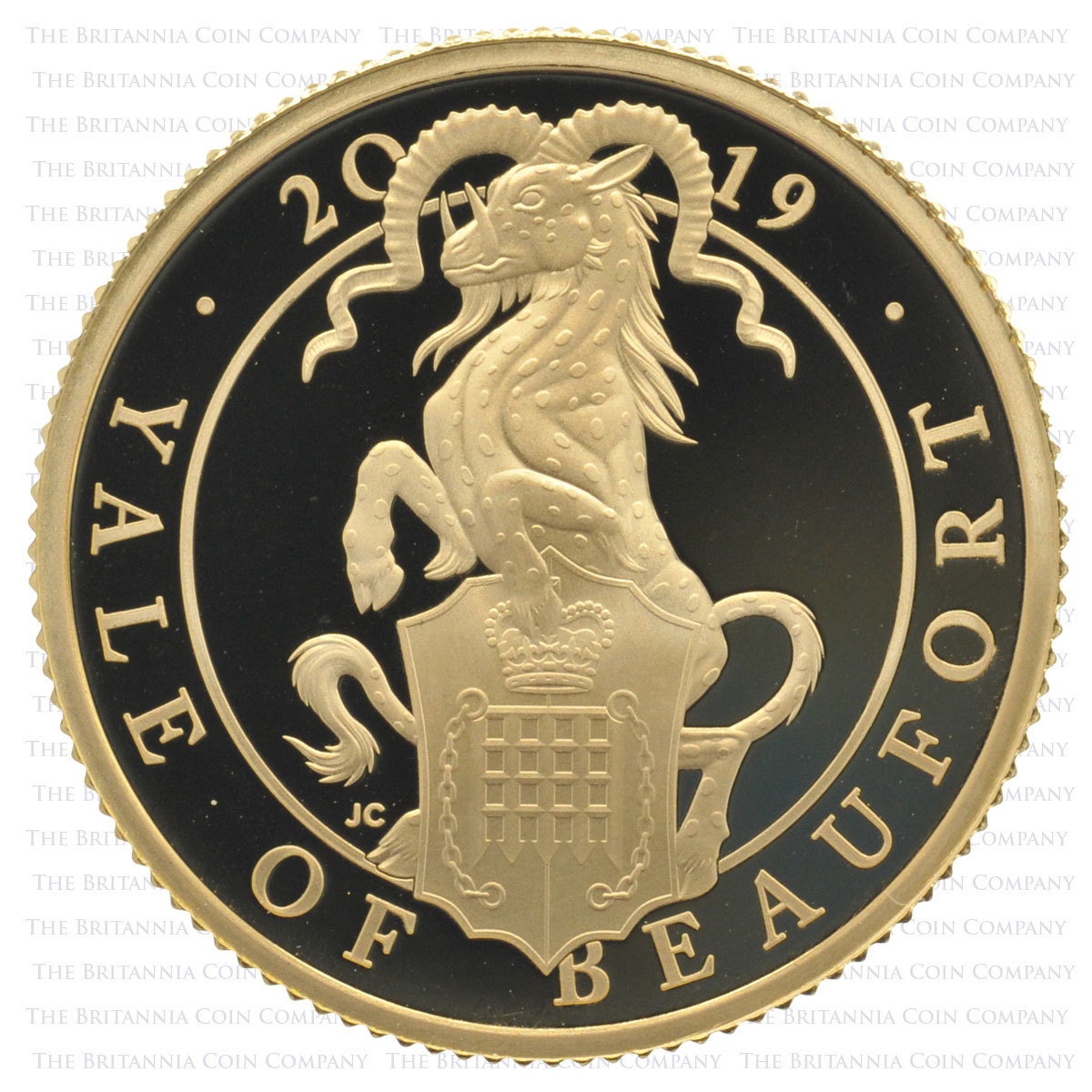 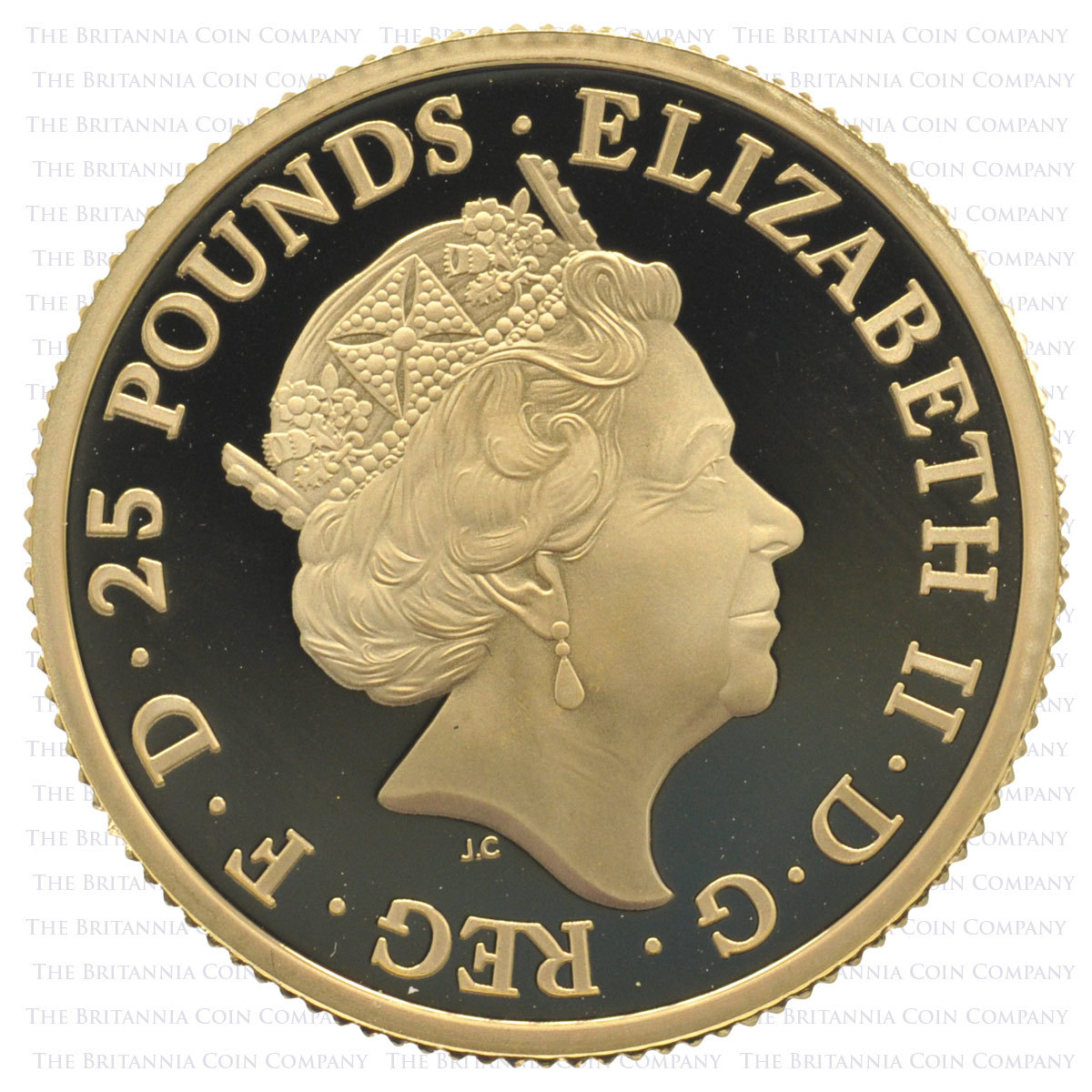 from
£650.00
(VAT Exempt)
The 2019 'The Yale of Beaufort' £25 gold Proof coin. Part of 'The Queen's Beasts' series from The Royal Mint. Boxed with Certificate of Authenticity. Limited mintage of only 1,000 coins.
Log in to get notified when this product is back in stock.
Track Product
You are not logged in. Please Login to track this product.
Description Summary Specification About £25 / Twenty Five Pounds Royal Mint About us

A limited mintage of just 1,000 individually boxed coins. This 2019 'The Yale of Beaufort' ¼ oz gold Proof coin is the sixth coin in 'The Queen's Beasts' series from The Royal Mint. The coin's obverse presents the 5th Portrait of Her Majesty the Queen, Elizabeth II, with the reverse depicting the mythical Yale in a 'rampant' pose over the shield of Lady Margaret Beaufort, mother of Henry VII. The theme of using a shield on the coin's reverse acts as a motif connecting The Queen's Beasts 10-coin collection. First released in 2017, the series commemorates the year Her Majesty became the longest reigning monarch in British history. It celebrates the 10 ancestral beasts of myth, legend and heraldry, which have watched over Elizabeth II throughout her reign. The limited presentation includes a boxed coin, a Certificate of Authenticity and a booklet produced in collaboration with Clive Cheesman, Richmond Herald at the College of Arms.

The Yale of Beaufort

For every coin in the series, Royal Mint engraver Jody Clark took inspiration from heraldry and the true nature of the beast. The Yale of Beaufort was a symbol of Lady Margaret Beaufort, mother of Henry VII, who later inherited the arms. The Yale bears a shield with the white and blue quarters of Margaret's arms with a centralised golden portcullis, a badge used by Henry VII. Westminster City Council, which is home to Westminster Abbey, the site of The Queen's 1953 Coronation, uses the portcullis within their arms too.

The mythical and ancient Yale was often described as; the size of a hippopotamus with the tail of an elephant, the jaws of a boar and of a black or tawny colour. It is said the Yale can individually swivel its horns, using them as two independent weapons in battle. Lady Beaufort played a vital role in the Wars of the Roses. Her position as matriarch of the Tudor dynasty gifted the legendary Yale the prestige it receives today.

The Yale is joined by nine other ancestral beasts of heraldry, myth and legend believed to have watched over Her Majesty The Queen since her Coronation Day. These 10 creatures are known as The Queen's Beasts:

The Yale of Beaufort was one of 10 statues sculpted by James Woodford, OBE. The six-foot-tall statues formed a guard of honour, The Queen's Beasts, at the entrance to Westminster Abbey in 1953, on the occasion of the coronation of Her Majesty the Queen, Elizabeth II. The figures were inspired by statues at Hampton Court Palace created over 400 years ago for Henry VIII and known as The King's Beasts. Today, The Queen's Beasts are displayed at the Canadian Museum of History in Quebec. Portland stone replicas, again designed by James Woodford, OBE, watch over Kew Gardens in London.

The Power of Gold

The expression 'a sea of gold' is soaked in truth. Gold exists naturally in oceans and there is more gold in the sea than people have ever mined. However, to refine gold from the sea is far more expensive than traditional gold-mining. It is also widely believed that gold exists on other planets including Mercury, Venus and Mars. Though it is not currently plausible, there may come a day when a gold Proof coin like this one may be quite literally out of this world!

Gold Proof coins are ideal for a serious collector. Minted at The Royal Mint with intricate designs, they represent the highest quality of commemorative coin and are therefore highly sought after. If you're considering starting a collection, you should know that Proof coins are a worthwhile investment with unrivalled sharpness, detail and finish. Proof coin dies are hand-finished to remove all imperfections. Gold Proof coins are also created by The Royal Mint to be enjoyed and treasured as a piece of history. Proof coins make the perfect gift to hand down to generations of family. They can also be gifted for a wedding, anniversary, birthday or special occasion.

This £25 coin is composed of 999.9 fine gold (24 carat). The coin's obverse presents the 5th Portrait of Her Majesty the Queen, Elizabeth II, by Jody Clark (since 2015). As the longest reigning Monarch, Her Majesty, The Queen has had Royal Portraits on coins produced by five different artists since her accession to the throne. The first Portrait was created by Mary Gillick, in 1953, followed by Arnold Machin (1968), Raphael Maklouf (1985), and Ian-Rank Broadley (1998), the portrait that appears on this 2003 Sovereign. Most recently, the 5th Portrait was designed by The Royal Mint's Jody Clark in 2015.

The Yale of Beaufort ¼ oz gold Proof coin was minted at The Royal Mint, a British institution with more than 1,000 years of history. The Royal Mint produces currency for over 60 countries worldwide. As one of the world's leading Mints, The Royal Mint has also helped to establish Mints in Sydney, Perth, Melbourne, Pretoria, Mumbai and Ottawa.

Every year, The Royal Mint releases a number of commemorative coins. In 2019, the year of this 'The Yale of Beaufort' coin, the Mint issued; A Crown in honour of Queen Victoria's 200th birthday, three £2 coins acknowledging the anniversaries of the foundation of Wedgwood, the D-Day Landings, and Samuel Pepys' diary, and a 50p paying homage to 'Sherlock Holmes' author Sir Arthur Conan Doyle on his 160th birthday.

The Britannia Coin Company of Royal Wootton Bassett was established to offer unbeatable value and exceptional service to collectors and investors. The Britannia Coin Company buys and sells a wide range of rare, interesting and collectable coins. These include newly minted gold, silver and other precious metal coins to milled, hammered, ancient and landmark issues from around the world. Royal Wootton Bassett was awarded Royal status by Her Majesty the Queen, Elizabeth II, in 2011. The rare status was awarded after the local community turned out in their hundreds to pay respect to repatriated soldiers killed in the Iraq and Afghanistan conflicts. Such an honour has not been awarded for over 100 years.