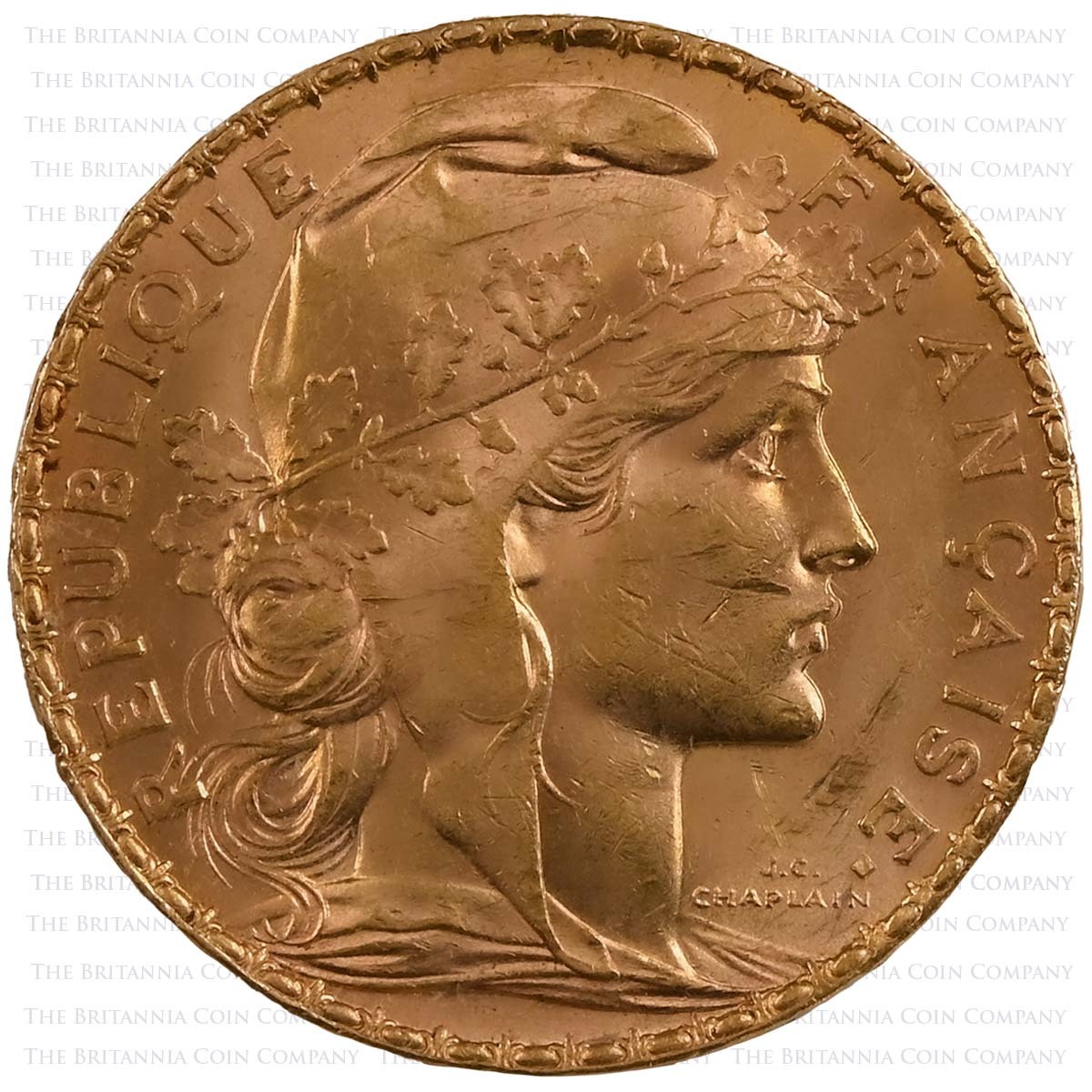 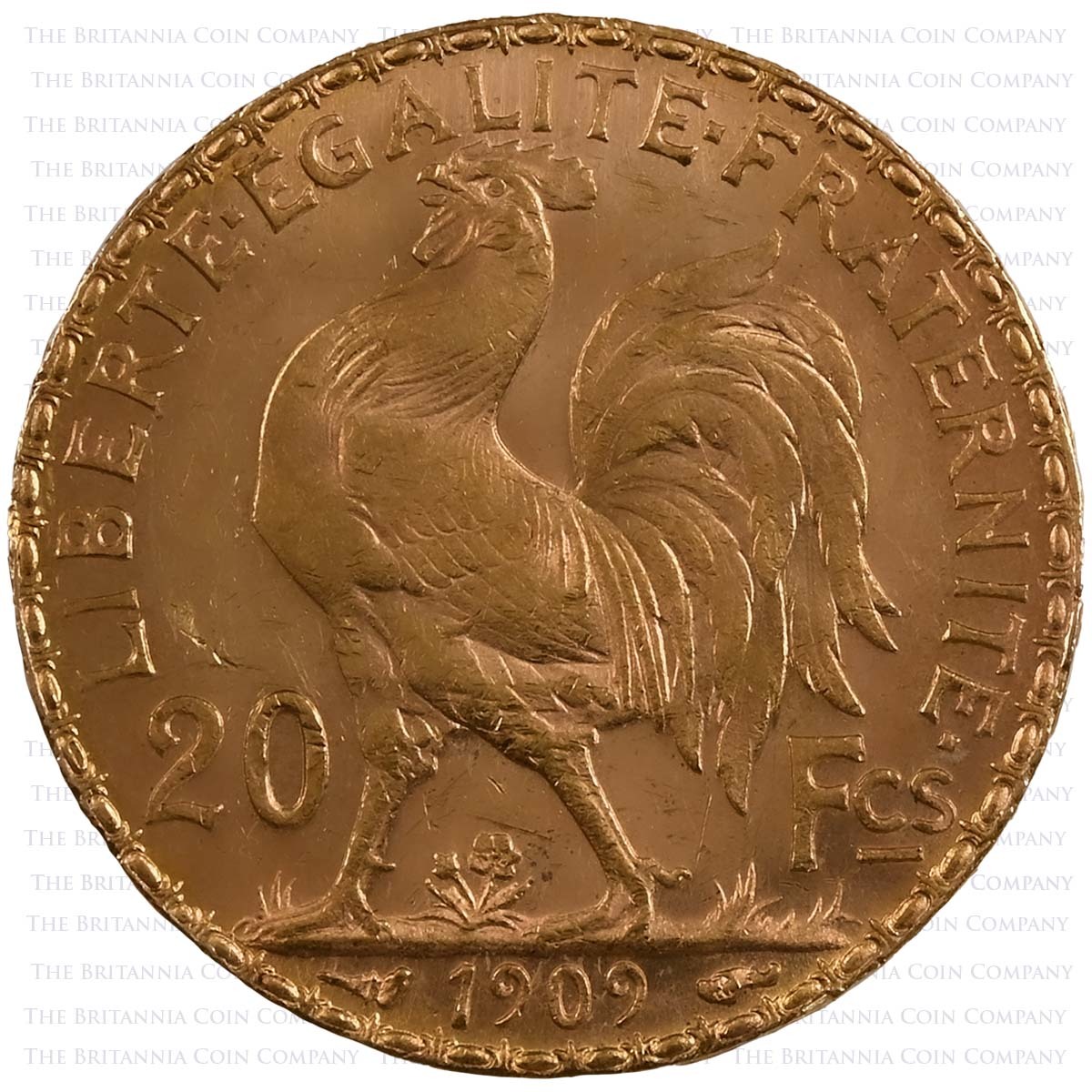 from
£287.00
(VAT Exempt)
Our Best Value French 20 Francs contain 5.81 grams of pure gold. These coins are sometimes called Napoléons because they were first issued by Napoleon Bonaparte in 1803. Gold 20 Franc pieces were struck for more than one hundred years and show a variety of different designs, reflecting the fascinating and complex political history of France in the nineteenth century. The example pictured shows the face of Marianne - the personification of the French Republic - to the obverse, paired with the image of a rooster: another important national symbol. When you buy our best value French 20 Francs you might receive a range of different designs and dates. What you can be sure of is that each coin is composed of 6.45 grams of 900.0 gold, equivalent to 21.6 carats or 5.81 grams of pure gold. This specification remained the same until the coin ceased being struck annually in 1914 and was also used for later re-strikes. Our best value coins are carefully authenticated by our expert staff and are guaranteed to be in good to fair circulated condition. We’ll send you our choice of year from our current stock. A great investment, these coins are VAT exempt in the UK and EU.
Log in to get notified when this product is back in stock.

French gold 20 Franc coins in our choice of year.

The Story of the Gold Franc

The first Francs were gold coins, issued by medieval French Kings. The name was revived for a new, decimalised national currency in introduced in the midst of the French Revolution in 1795. 1 Franc was worth 10 Décimes or 100 Centimes: a system that continued to be used until the Euro was adopted in 2002.

Gold coins, worth multiple Francs, were first minted in 1803. These gold Francs served a similar purpose to the earlier French gold coin, the Louis D'Or. Initially, 20 and 40 Franc coins were issued though it was the 20 Franc pieces that circulated better.

The first of these coins were issued by Napoleon Bonaparte during his reign as First Consul of France. Its this association that led to gold Francs being referred to as 'Napoléons', even when they no longer bore his likeness.

The 1803 French 20 Franc measured 21.00 millimetres in diameter and weighed in at 6.45 grams. This specification and the fineness - 900.0, equivalent to 21.6 carats - remained the same until the final annual issue of these coins in 1914 (including later restrikes).

20 Franc coins continued to be minted in France, after Louis XVIII was restored to the French throne in 1814. His portrait then that of his brother, Charles X, replaced Bonaparte’s but the weight and fineness of the 20 Franc coin remained the same. Louis Philippe I's effigy graced the 20 Franc coin during the July Monarchy.

The Second Republic, Second Empire and Third Republic also minted gold 20 Franc coins. Those issued by Napoleon III bore his profile on the obverse while others featured significant symbols: Marianne; Ceres, goddess of agriculture, an angel and a rooster. These later 20 Franc coins largely displayed the legend 'LIBERTÉ EGALITÉ FRATERNITÉ'.

French 20 Franc coins were always minted in 21.6-carat gold, meaning each 6.45 gram coin contains 5.81 grams of pure gold. Their gold content means that they are VAT exempt in the UK and EU. You will still need to pay Capital Gains Tax on any profit you make above the UK Government’s CGT allowance as 20 Franc coins are not legal tender.

Your French 20 Franc coins will be selected from our available stock. For our Best Value offers we cannot guarantee the specific year or years you will receive. If you order multiple 20 Franc coins you may find that their dates and designs vary significantly.

However, we can guarantee that your French 20 Franc coins will be in good to fair, circulated condition. These 20 Franc coins do not have significant numismatic value but you can trust that their pure gold content will be as stated. You will not find any ex-jewellery mount coins or similarly damaged stock in your order.