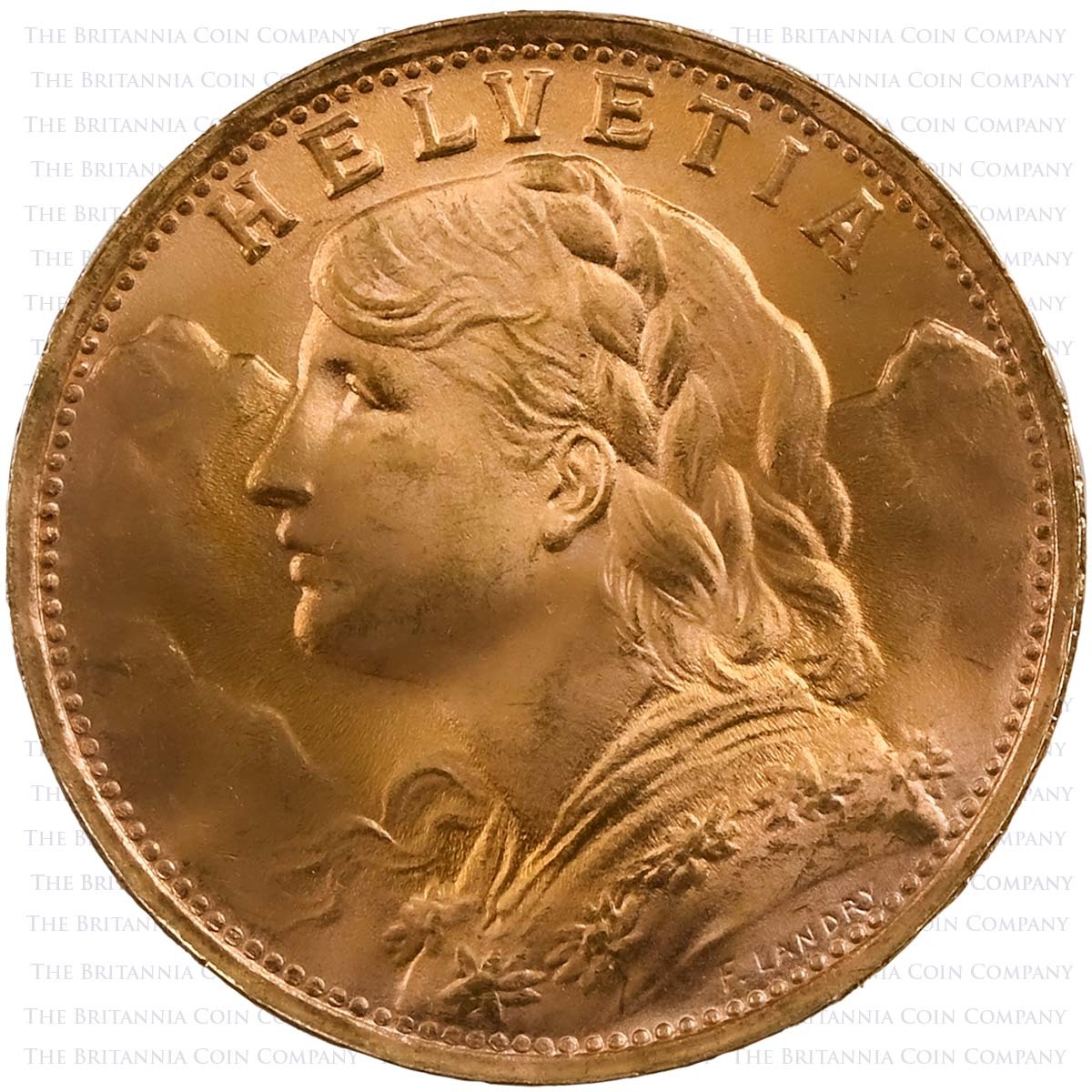 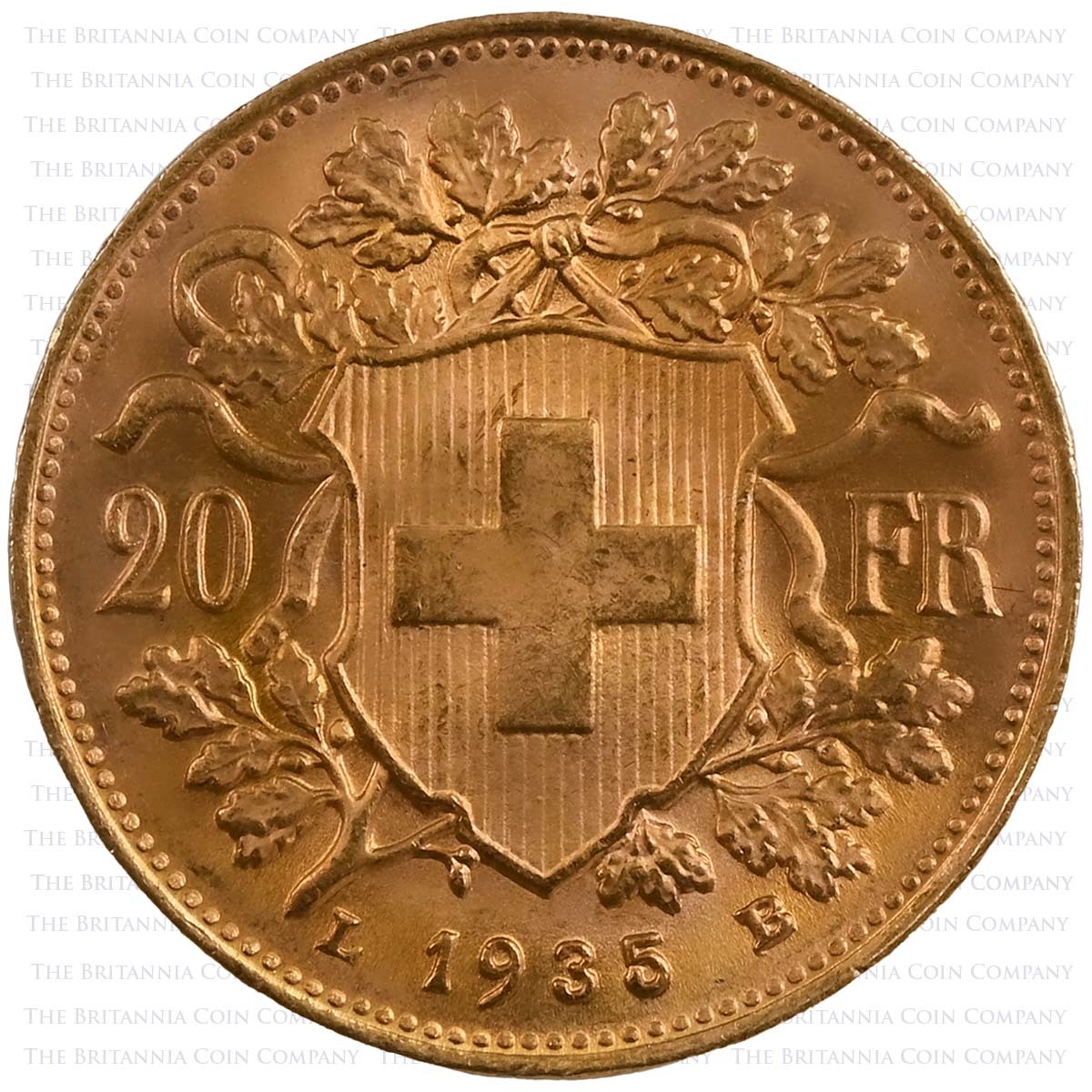 from
£288.36
(VAT Exempt)
Swiss 20 Franc coins follow the same specifications as their French counterparts. The difference is in the design. The vast majority of the Swiss coins feature the image of Helvetia: the national personification of Switzerland. She’s depicted as a young woman with plaited hair, pictured in front of the Alps. This design is sometimes known as the ‘Swiss Miss’ and the coin referred to as the ‘Vreneli’, a nickname originating from the diminutive form of an archetypically Swiss girls’ name. The Helvetia Head was used from soon after the first Swiss 20 Franc coins were introduced in 1883 until the last annual issue in 1936. A number of post-war restricts were made to the same specifications and you may find these in your best value purchase. We carefully authenticate all our bullion coins and send out our choice of date from our current stock. These 20 Franc coins are guaranteed to be in good to fine circulated condition. 20 Franc gold coins are lighter than other bullion coins like British Sovereigns, weighing in at 6.45 grams of 900.0 fineness gold. This means that the entry price for these coins is lower, making them an accessible and flexible addition to a gold portfolio. They’ve also got the added benefit of being VAT exempt in the UK.
Log in to get notified when this product is back in stock.

Francs were introduced to Switzerland during the era of the Helvetic Republic and later became the model for several cantonal currencies. It was not until 1850 that the decimal Franc was made the official monetary unit of the Swiss Confederation, introduced on par with the French Franc.

Swiss Gold 20 Franc coins were first introduced in 1883, initially using the same design as the Five Franc coin, engraved by Albert Walch. In 1895 an original design was chosen: a piece by the Swiss medallist and sculptor Fritz Ulysse Landry. This was first minted on a Swiss 20 Franc coin in 1897.

The 1897 design featured a portrait of Helvetia: the national personification of Switzerland, as Britannia is to the UK. Known as the Helvetia Head, Landry’s design shows a profile portrait of a young woman with plaited hair and a wreath of edelweiss, pictured in front of the Alps. This design is sometimes known as the 'Swiss Miss' and the coin referred to as the 'Vreneli', a nickname originating from the diminutive form of an archetypically Swiss girls' name. The inscription 'HELVETIA' crowns her head.

Gold Swiss 20 Franc coin weighs in at 6.45 grams of 900.0 fine gold and has a diameter of 21.00 millimetres. These are the same specifications established in Napoleonic France for the French 20 Franc coin.

Switzerland was a member of the Latin Monetary Union which agreed on the Franc as the common currency across a bloc that included France, Italy, Belgium and later Greece. This meant that Swiss Gold 20 Franc coins could be used across a significant part of Western Europe.

The difference between Swiss 20 Franc coins and similar coins from other European countries is their distinctive design which remained the same from 1897 to 1936 when the Swiss currency suffered its sole devaluation during the Great Depression. The Helvetia Head also appeared on post-Second World War re-strikes, all dated 1935 and most identified by a small 'L' next to the date.

Your Swiss 20 Francs will be selected from our available stock of post-1897 coins, including re-strikes. For our Best Value offers we cannot guarantee the specific year or years you will receive. If you order multiple Swiss 20 Franc coins you may find that their dates range significantly.

However, we can guarantee that your Swiss 20 Franc coins will be in good to fair, circulated condition. These 20 Franc coins do not have significant numismatic value but you can trust that their pure gold content will be as stated. You will not find any ex-jewellery mount coins or similarly damaged stock in your order.

These Swiss 20 Franc coins are somewhat lighter than comparable gold coins like British Sovereigns. The smaller amount of gold means that the entry price for 20 Franc coins is lower, making them an accessible and flexible addition to a gold portfolio. Their gold content means that they are VAT exempt in the UK and EU.