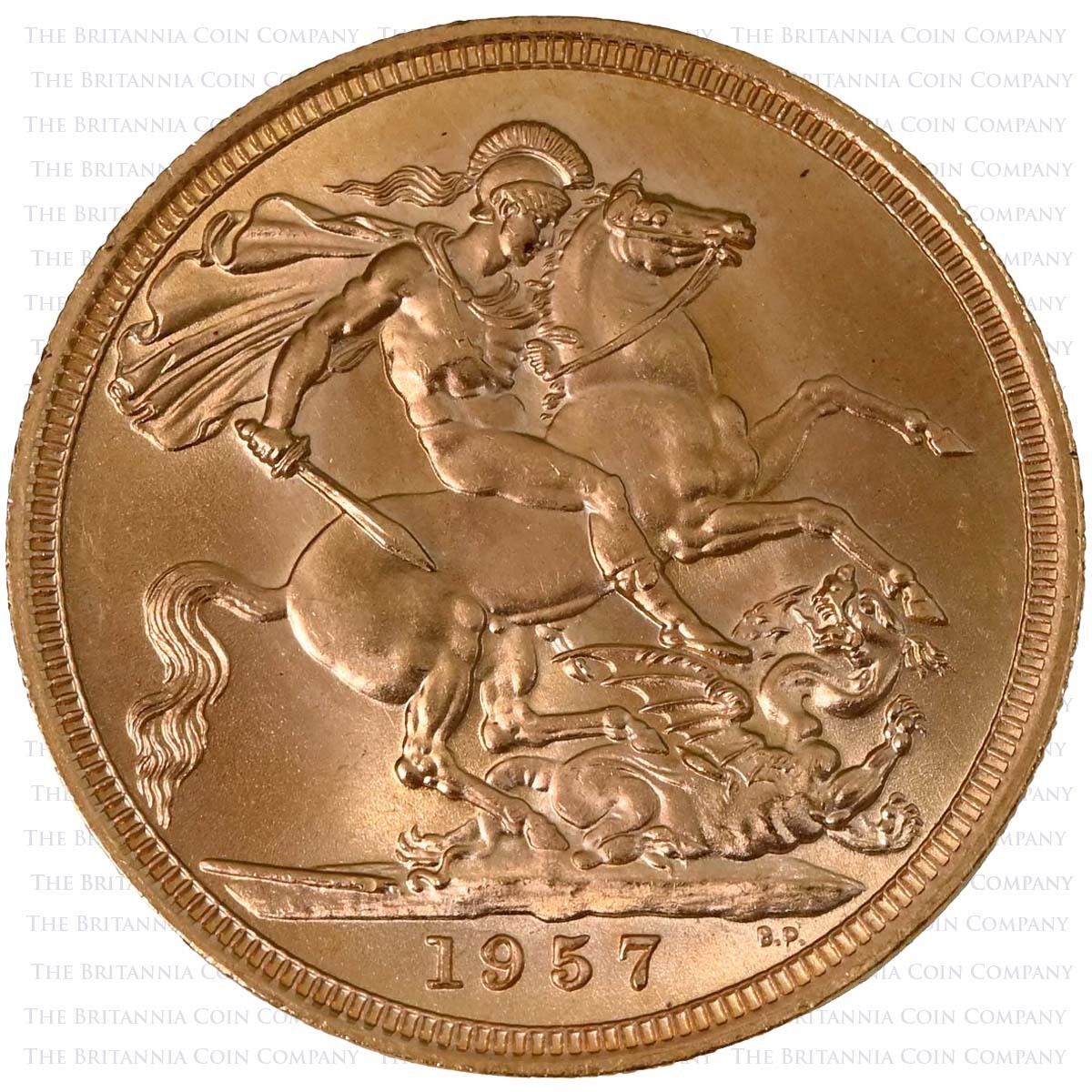 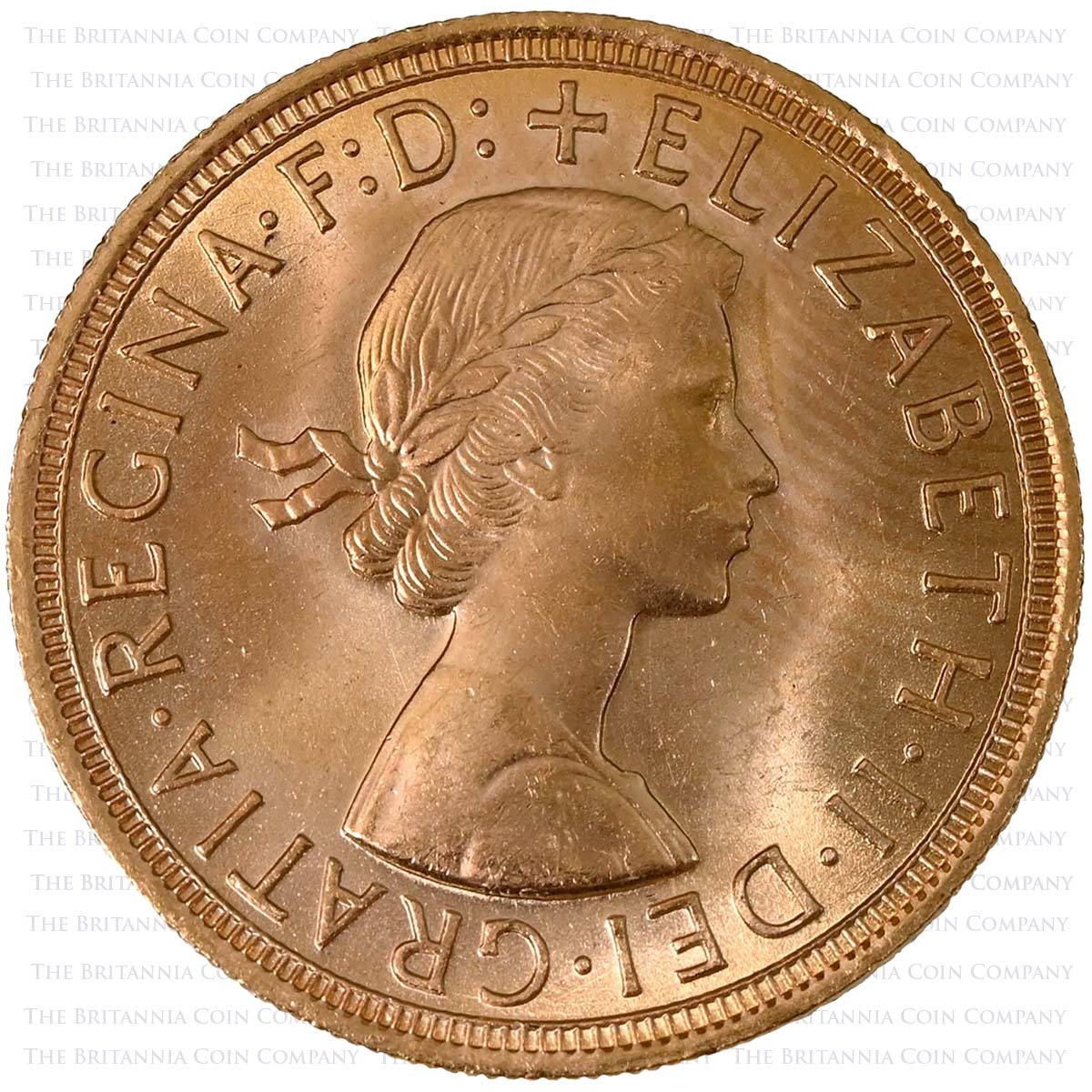 from
£525.00
(VAT Exempt)
Minting of gold Bullion Sovereign coins began in 1957 to meet a demand for genuine Sovereigns, which suffered from excessive forgery. This gold bullion Sovereign is carefully chosen by our team and graded at aEF (about Extremely Fine) or above. Coins graded at Extremely Fine or above have few signs of wear. Bullion coins are also less costly than their Proof counterparts, making them more cost-effective. Ideal for marking a special occasion such as a wedding, birthday or anniversary. The Obverse presents the 1st Portrait of HM The Queen, Elizabeth II, by Mary Gillick. The Reverse hosts the classic 'St George and the dragon' design by Benedetto Pistrucci. The Sovereign is exempt from VAT and Capital Gains Tax and our price is inclusive of fully insured UK shipping. Subject to stock availability.
Quantity
Cost Per Unit
Starts From
1+
£525.00
£525.00

The Sovereign is considered by many to be the flagship of The Royal Mint. The first ever Sovereign coin was commissioned by Henry VII in 1489, and by each Tudor Monarch until the reign of James I, when the Sovereign disappeared for two centuries. Revived in 1817 as part of the great coinage reform at the end of the Napoleonic Wars, it traditionally featured a heraldic reverse. This was later abandoned in favour of a 'St George and the dragon' design by Benedetto Pistrucci. The modern gold Sovereign was first minted in Britain from 1817 until 1917, and then in 1925, 1957–59, 1962–68, 1974, 1976, 1978–82 and 2000 to the present day. Modern gold bullion Sovereign production was paused after 1982 up until the year 2000, although Proof versions were still issued.

The Sovereign ceased being in circulation during the First World War, when the public were asked to surrender gold Sovereigns to; support the war effort, pay off international debts, and build up the Bank of England reserves.

The 1957 Gold Sovereign Bullion coin hosts a portrait of Elizabeth II by Mary Gillick. HM Queen Elizabeth II is the current and longest reigning British monarch of all time. Born on 21st April 1926 to King George VI and Elizabeth Bowes-Lyon, Princess Elizabeth became Queen in 1952 and her Coronation was held on 2nd June 1953.

1957 was a remarkable year in history, now immortalised in coinage.

The Obverse (front, heads) presents Queen Elizabeth II's first portrait by Mary Gillick. The 1957 Sovereign is the first Sovereign made available to the general public to feature an effigy of Elizabeth II. The first Portrait of Elizabeth II was issued on British coinage in 1953, the year of Her Majesty's Coronation. The image hosts a youthful and uncrowned Queen. Gillick competed against 16 artists for the honour of designing the first Portrait of Elizabeth II. Her design stood out for its absence of a crown and The Queen's 'approachable' depiction. As a tribute to Mary Gillick, the design is still struck on Maundy Money today at The Queen's request.

The Reverse (back, tails) of the 1957 gold bullion Sovereign hosts the signature 1817 'St George and the Dragon' design by Benedetto Pistrucci. 19th century talented Italian engraver Pistrucci was instructed to develop designs for George III's silver and gold coins by The Master of The Mint. Pistrucci also designed the Waterloo Medal for the British Government, a commission which took the artist 30 years to create.

A small number of Proof versions of the 1957 gold Sovereign were issued in response to Middle Eastern demand but these are exceptionally rare. This 1957 bullion coin may be supplied in an acrylic capsule.

St George's legacy dates back to the 3rd century, often depicted as a heroic defender of the Christian faith. The most widely shared story recounts St George as a rescuer on horseback sent to slay a dragon in order to save a young maiden or princess. It is widely believed that the dragon in the mythical tale was slain at Uffington's Dragon Hill, a Bronze-age site just a stone's throw from our premises in Royal Wootton Bassett. As the Patron Saint of England, St George celebrated in the country on the 23rd April every year since 1222.

Being a 'bullion' coin, the value of a 1957 Sovereign is determined by the indicative market rate for gold bullion. The live gold price operates in dollars, so its value is also subject to currency fluctuations from Dollars to Sterling. The live gold price is often referred to as the 'spot' value and bullion coins are often valued at a percentage above or below the spot price. If you're looking to sell a 1957 Sovereign, we pay on the day of receipt (Monday to Friday).

Selling Sovereigns to The Britannia Coin Company is a straightforward process, with payment in most instances being issued on the day we receive your coins (Monday to Friday).

This 1957 Sovereign coin is struck to Bullion standard and has legal tender status with a nominal value of one pound sterling. The Royal Mint has produced the modern Sovereign coin since its origins in 1817. It was formerly a circulating coin that was accepted in the UK and around the world. Today, it is an easy way to invest in or collect gold Bullion. As the longest reigning British monarch, Elizabeth II has had five Royal Portraits on coins produced since her accession to the throne in 1952; Mary Gillick (1953-1967), Arnold Machin (1968-1984), Raphael Maklouf (1985-1997), Ian-Rank Broadley (1998-2014) and Jody Clark (2015-).

The 1957 Sovereign's return was due to demand for authentic Sovereigns following counterfeit issues. The modern Sovereign is produced at The Royal Mint, the official home of UK coinage minting. Its history dates back well over 1,000 years and today, The Royal Mint produces currency for many countries across the globe. The Royal Mint first moved to the Tower of London in 1279 and remained there for over 500 years. When decimalisation was introduced in 1971, all The Royal Mint's coin production was relocated to Llantrisant, Wales. A Gold Sovereign was the last coin struck in London in 1975.

The Sovereign appeared in the 1957 Ian Fleming novel 'From Russia, with Love', in which Q issues protagonist James Bond with a briefcase, the handle of which contains 50 Sovereign coins. During a scene on the Orient Express, Bond uses the gold Sovereigns to distract the enemy leading to their demise.

St George is rumoured to have slain the dragon just 20 miles west of our premises in Royal Wootton Bassett. The Britannia Coin Company of Royal Wootton Bassett was established to offer market leading prices to collectors and investors. The Britannia Coin Company handles an array of rare, commemorative and investment coins. These coins include gold, silver and other precious metal modern coins to ancient, hammered and world issues from across the globe. Royal Wootton Bassett was awarded Royal status by Her Majesty the Queen, Elizabeth II, in March 2011, the first town to be awarded such an honour for over 100 years.

A 1957 full gold bullion Sovereign weighs 7.98g and is struck in 22 carat gold. It therefore contains 7.32g of fine (pure) gold. Being a bullion coin, its value fluctuates in-line with the gold market.

To see how much your Sovereign is worth, click the 'Sell to Us' button further up this page to receive an up-to-date valuation.

2,072,000 bullion sovereigns and a very small quantity of proof sovereigns were minted In 1957. The obverse design is by Mary Gillick and the reverse by Benedetto Pistrucci.