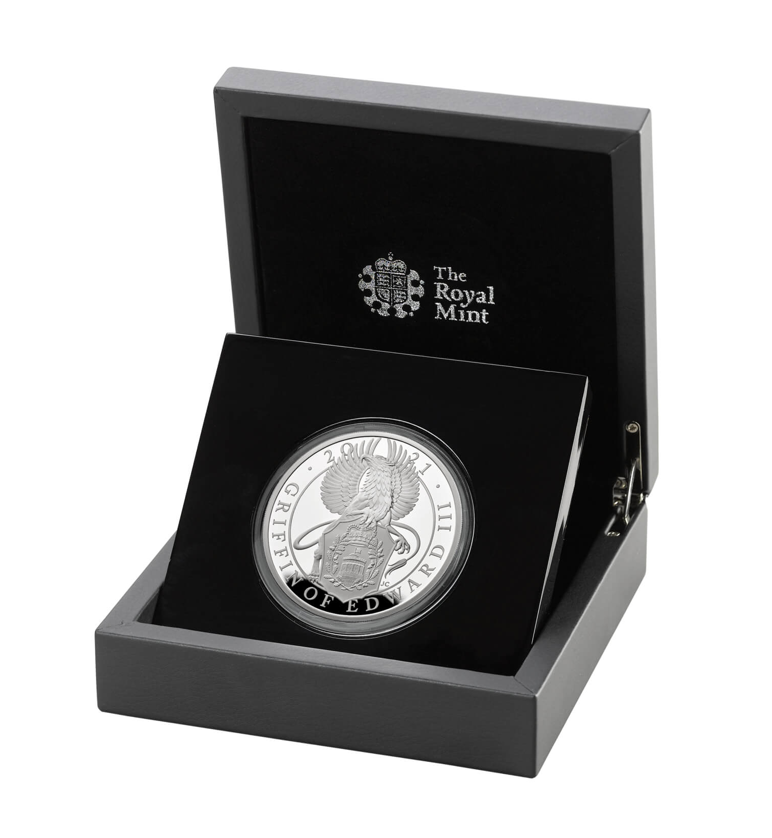 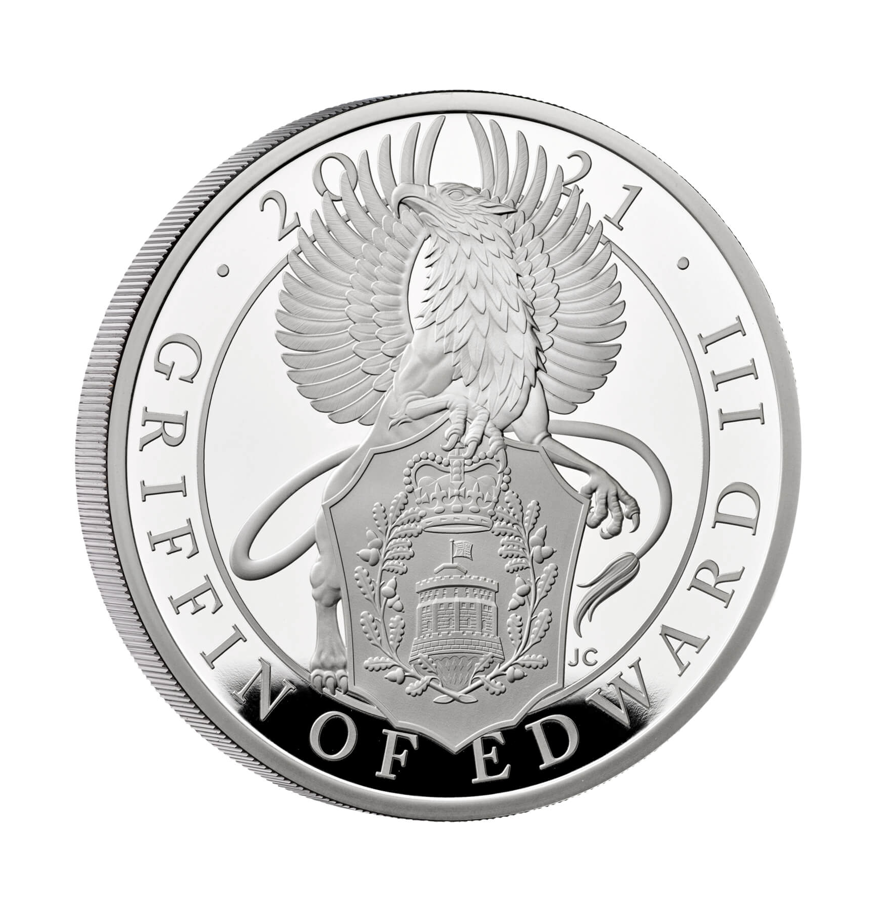 £1,250.00
New for 2021, the highly anticipated final design in the Queen's Beasts series. Minted in glorious Silver Proof, this Five Ounce coin is inspired by the legendary griffin: a fearsome mythological creature and personal symbol of Edward III. The work of Royal Mint designer, Jody Clark, this £500 coin is from a limited mintage of just 290 and weighs in at 156.3 grams of 999.9 fine Silver. Presented in a Royal Mint case with a booklet and a numbered Certificate of Authenticity.
Quantity
Cost Per Unit
Starts From
1+
£1,250.00
£1,250.00
Track Product
You are not logged in. Please Login to track this product.
Description Summary

New additions in the Royal Mint's Queen's Beasts collection have been flying off the shelves since the first design was revealed in 2016. Coins in the series, including the Griffin of Edward III - 2021 UK Five Ounce Silver Proof Coin, combine lifelike animals with graphic heraldic elements.

The series was inspired by 10 statues – crafted by sculptor James Woodford – that stood guard during the Queen's 1953 coronation. Featuring the real and mythological beasts that appear on the coats of arms of British royal houses, the Queen's Beasts symbolise Her Majesty's noble lineage.

The Griffin: A Fantastic Beast

The Griffin of Edward III - 2021 UK Five Ounce Silver Proof Coin stars an ancient mythological creature. With the body of a lion – the king of the beasts – and the head and wings of an eagle – king of the birds – the griffin was said to be both powerful and intelligent, known for guarding treasures.

The legendary animal is identified in the coin's reverse inscription which reads: 'GRIFFIN OF EDWARD III · 2021 ·'. The griffin's upturned wings cut into the legend, creating a sense of movement, as if the beast is climbing out of the coin. It is a dynamic, beautifully rendered design.

Edward III and the House of Windsor

The griffin was closely associated with medieval monarch, Edward III, featuring on his private seal. A formidable warrior, Edward's fifty-year reign as King of England saw important developments in legislation and government, as well as the horrors of the Black Death.

The Griffin of Edward III - 2021 UK Five Ounce Silver Proof Coin bears the badge of the House of Windsor: the royal house to which the Queen belongs. Emblazoned on a shield that the griffin rears over, the badge features the Round Tower of Windsor Castle – Edward III's birthplace.

Obverse and Reverse by Jody Clark

As with all coins in the Queen's Beasts series, the Griffin of Edward III - 2021 UK Five Ounce Silver Proof Coin is the work of Royal Mint designer Jody Clark. His creations are influenced by the original sculptures, studying real animals and a childhood interests in fantastic beasts.

Clark is also responsible for the coin's obverse: the fifth definitive portrait of Elizabeth II to feature on her coinage. The obverse inscription flags the face value of this striking coin. It reads 'ELIZABETH II · D · G · REG · F · D · 10 POUNDS ·' Clarks initials, JC, appear on both sides of the coin.

Collectors have been clamouring to complete their Queen's Beasts sets, with each release more anticipated than the last. With just 290 coins available in this highly limited mintage, the Queen's Beasts: The Griffin of Edward III - 2021 UK Five Ounce Silver Proof Coin is likely to sell fast.

Whether you have already acquired others in the series or are just starting your collection, this Five Ounce Silver Proof Coin is a great addition. Your purchase comes in its original Royal Mint packaging together with a numbered Certificate of Authenticity and a commemorative booklet.