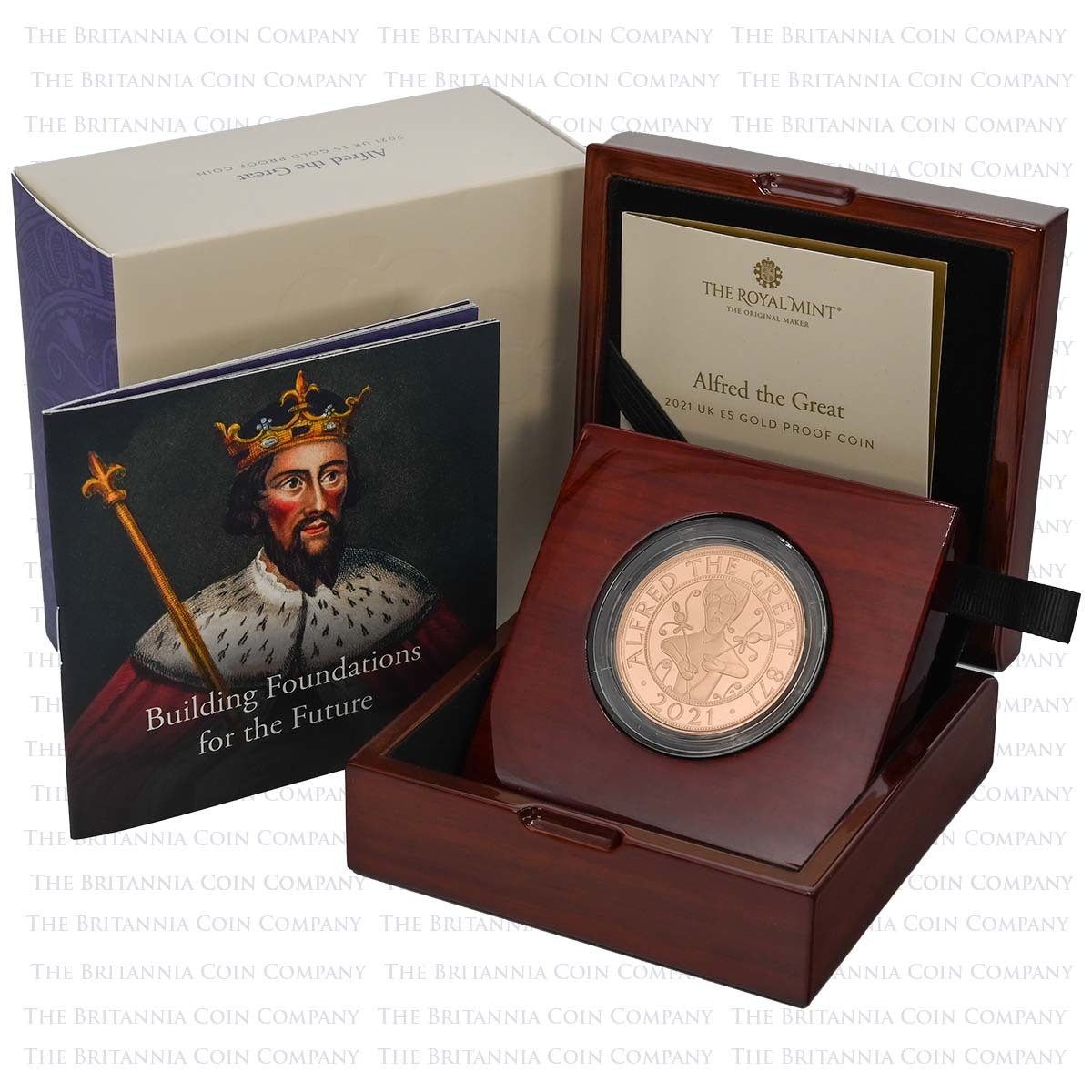 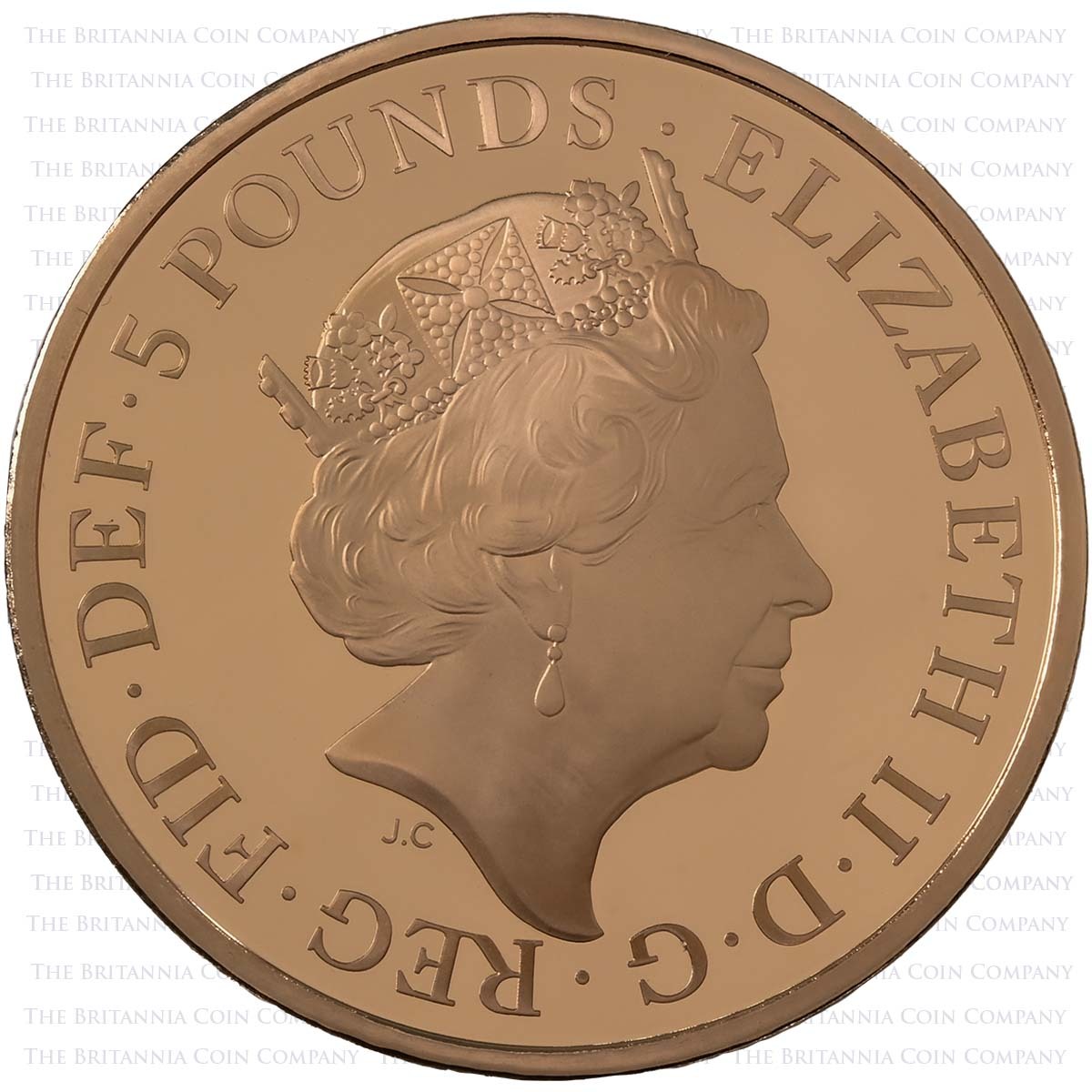 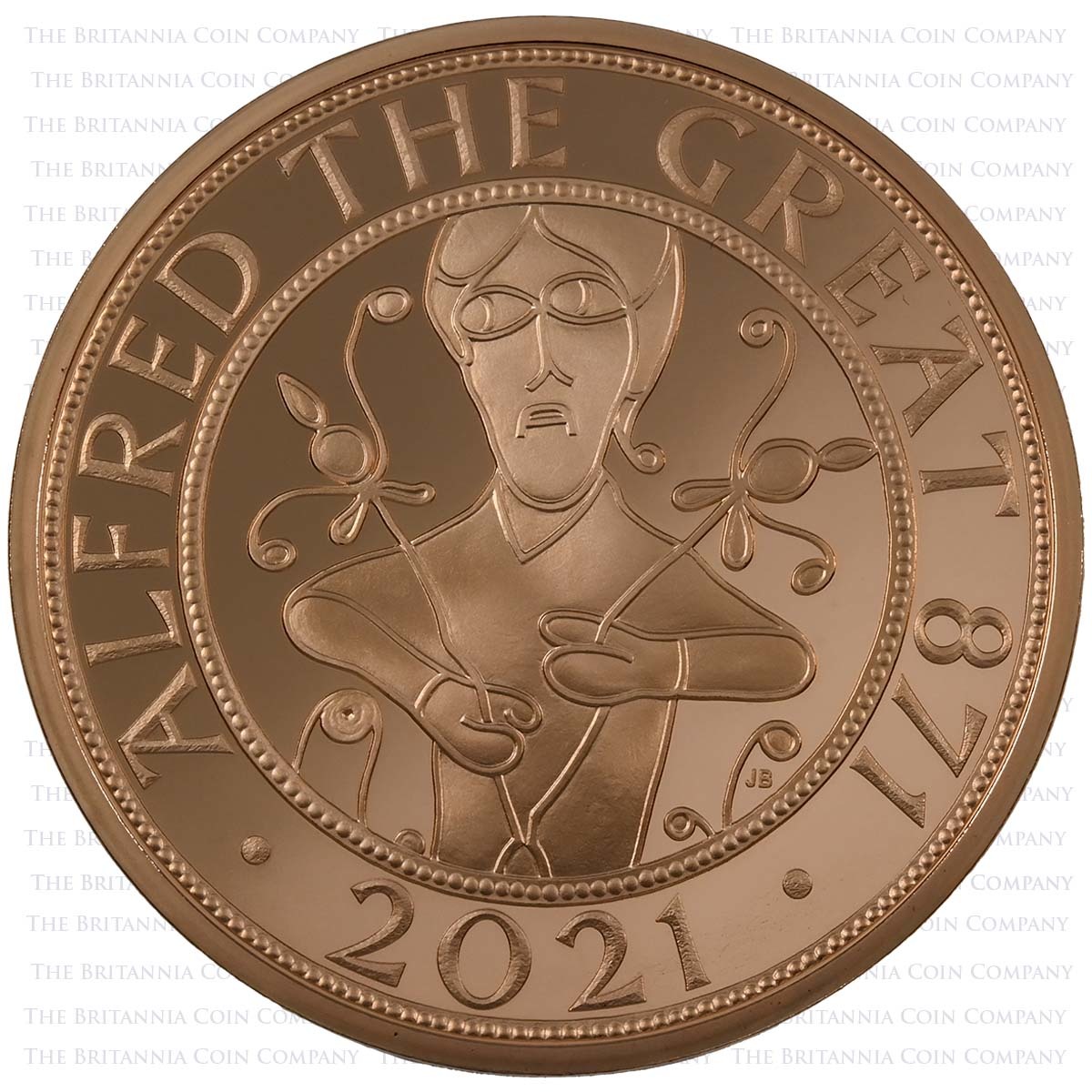 from
£3,250.00
(VAT Exempt)
2021 marks 1,150 years since the coronation of Alfred the Great, the legendary Anglo-Saxon king. To celebrate the achievements of this remarkable early English monarch, The Royal Mint has released a small range of commemorative pieces, including this Five Pound gold coin. Limited to just 160 pieces, its struck in 39.94 grams of 22 carat gold. The reverse features an eye-catching motif by veteran coinage designer, John Bergdahl, inspired by The Alfred Jewel, a remarkable example of 9th century goldsmithing which can be seen at the Ashmolean Museum. This is paired with Jody Clark’s portrait of Her Majesty the Queen. This gold coin is offered in its original packaging with a numbered certificate of authenticity.
Quantity
Cost Per Unit
Starts From
1+
£3,250.00
£3,250.00
Track Product
You are not logged in. Please Login to track this product.
Description Summary Specification Royal Mint About us

A 22 carat gold Five Pound coin, celebrating 1,150 years since the coronation of Alfred the Great.

It's not just for his dominance on the battlefield that Alfred – alone of all the English monarchs – is called 'the Great'. Alfred is also renowned for his peace efforts, legal improvements, support for learning, and military reorganisation, as well as his reputation for piety and fairness. He also instituted a program of coinage reform so its fitting that this anniversary should be celebrated on a new collection of commemorative coins from The Royal Mint.

The reverse of this 22 carat gold Five Pound coin is the work of John Bergdahl and bears similarities to his Magna Carta £2 and Battle of Hastings 50p: both of which take inspiration from prized medieval artworks.

Berghdahl based his Alfred the Great design on the renown Alfred Jewel. Found in a field in Somerset, the jewel, now in the Ashmolean Museum is a masterpiece of early medieval goldsmithing, crafted around a vividly coloured piece of enamel work which is thought to show an image of Christ.

This stylised figure is recreated on the 2021 coin with the legend 'ALFRED THE GREAT' surrounding the motif in 'punch' style lettering, used during Alfred’s reign.

The edge inscription is also inspired by the Alfred Jewel, reading 'AELFRED MEC HEHT GEWYRCAN' which means 'Alfred ordered me to be made'.

Just 160 of these gold proof Five Pound coins are available from The Royal Mint.

This proof-finish £5 coin is composed of 39.94 grams of 22 carat gold. It’s the most exclusive in the 2021 Alfred the Great range with only 160 pieces offered in this presentation. John Bergdahl’s design is also featured on silver proof and silver proof piedfort Five Pound coins of which we also have a limited stock.

The 38.61 millimetre coin is offered in its original packaging from The Royal Mint which is composed of a decorative cardboard box and a presentation case. The coin is enclosed in its capsule and comes with an information booklet and a numbered certificate of authenticity.

We've seen great demand for Royal Mint commemorative five-pound coins, particularly these gold proof editions. Between the masterfully rendered design and the unusual choice of subject in Alfred the Great we predict that this one will get snapped up quickly.