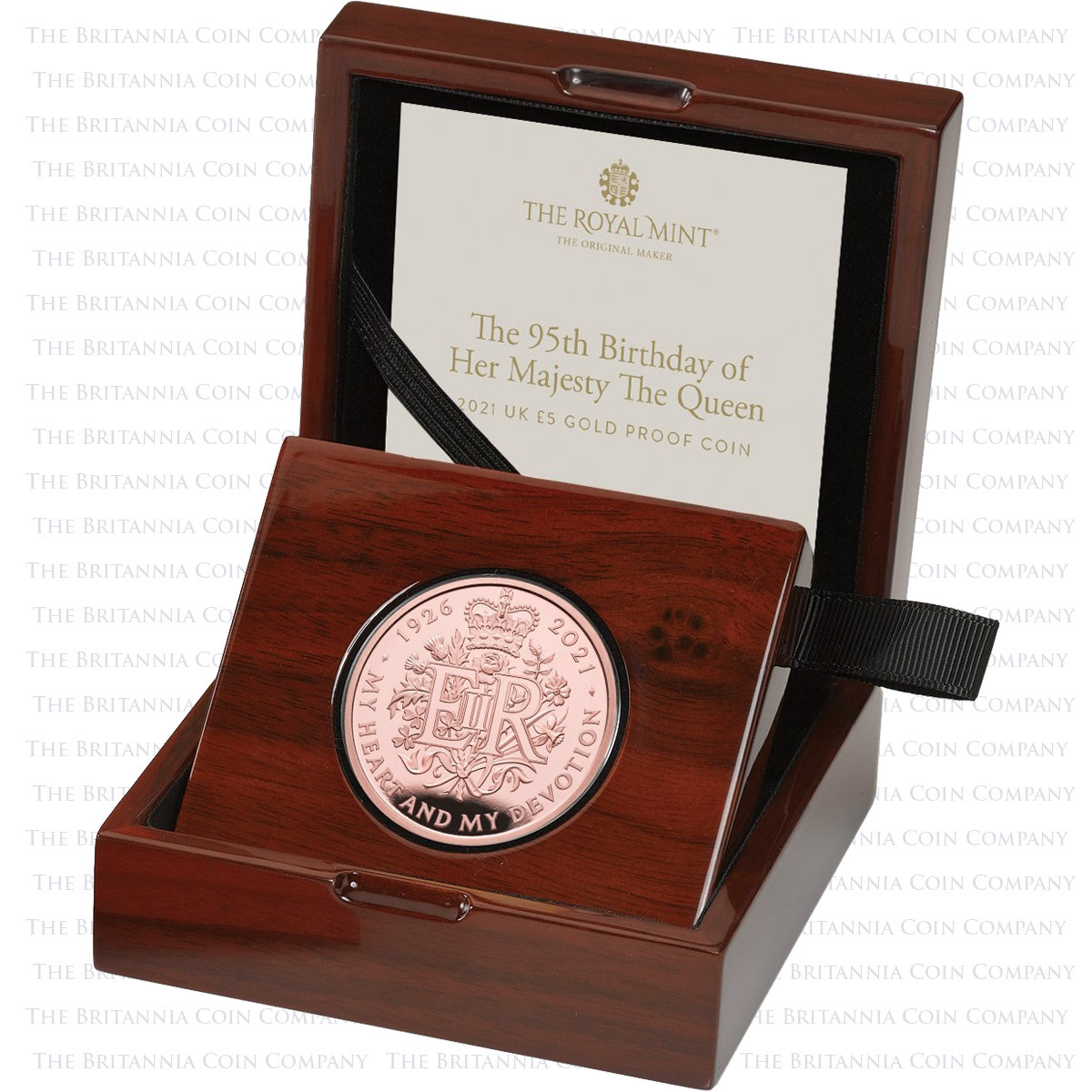 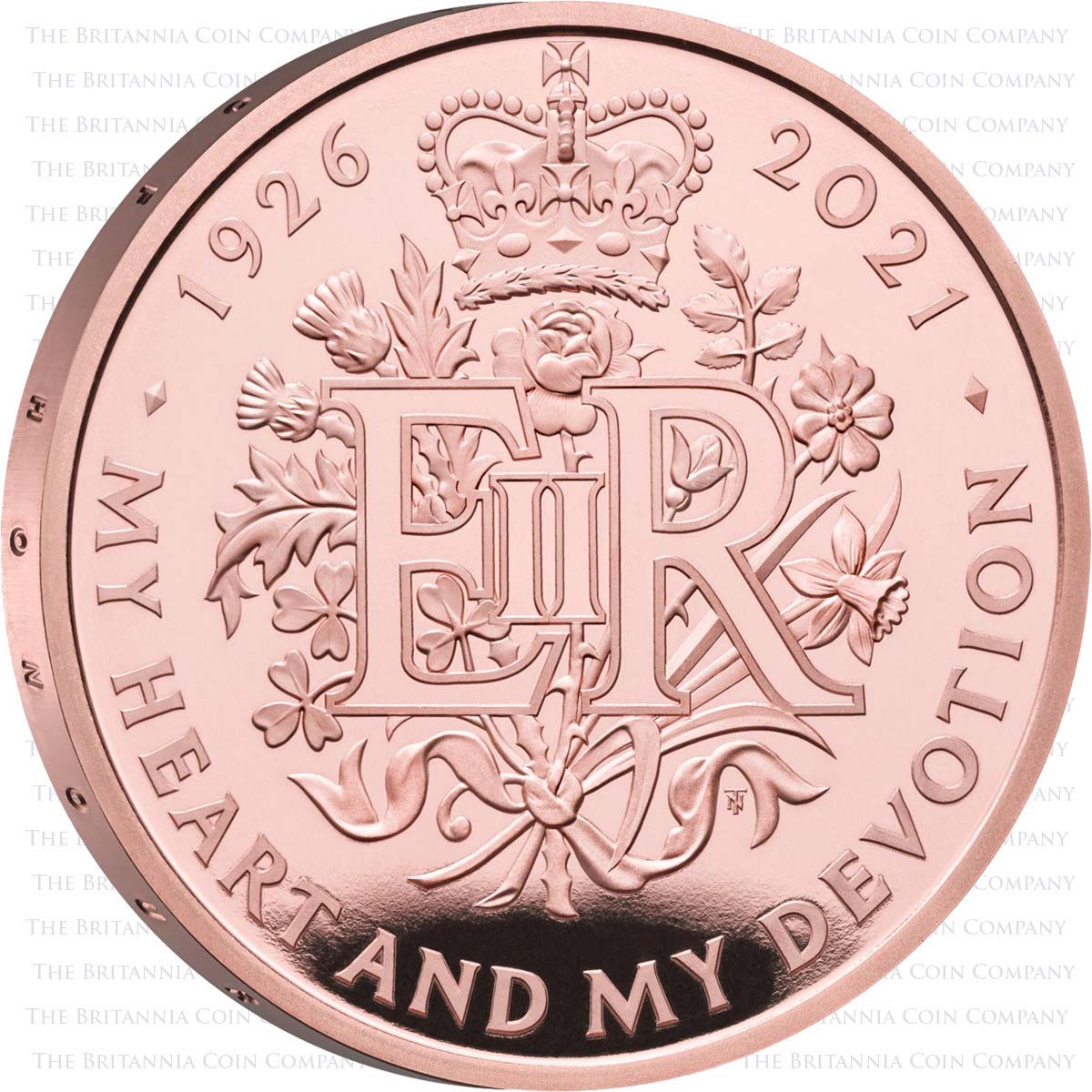 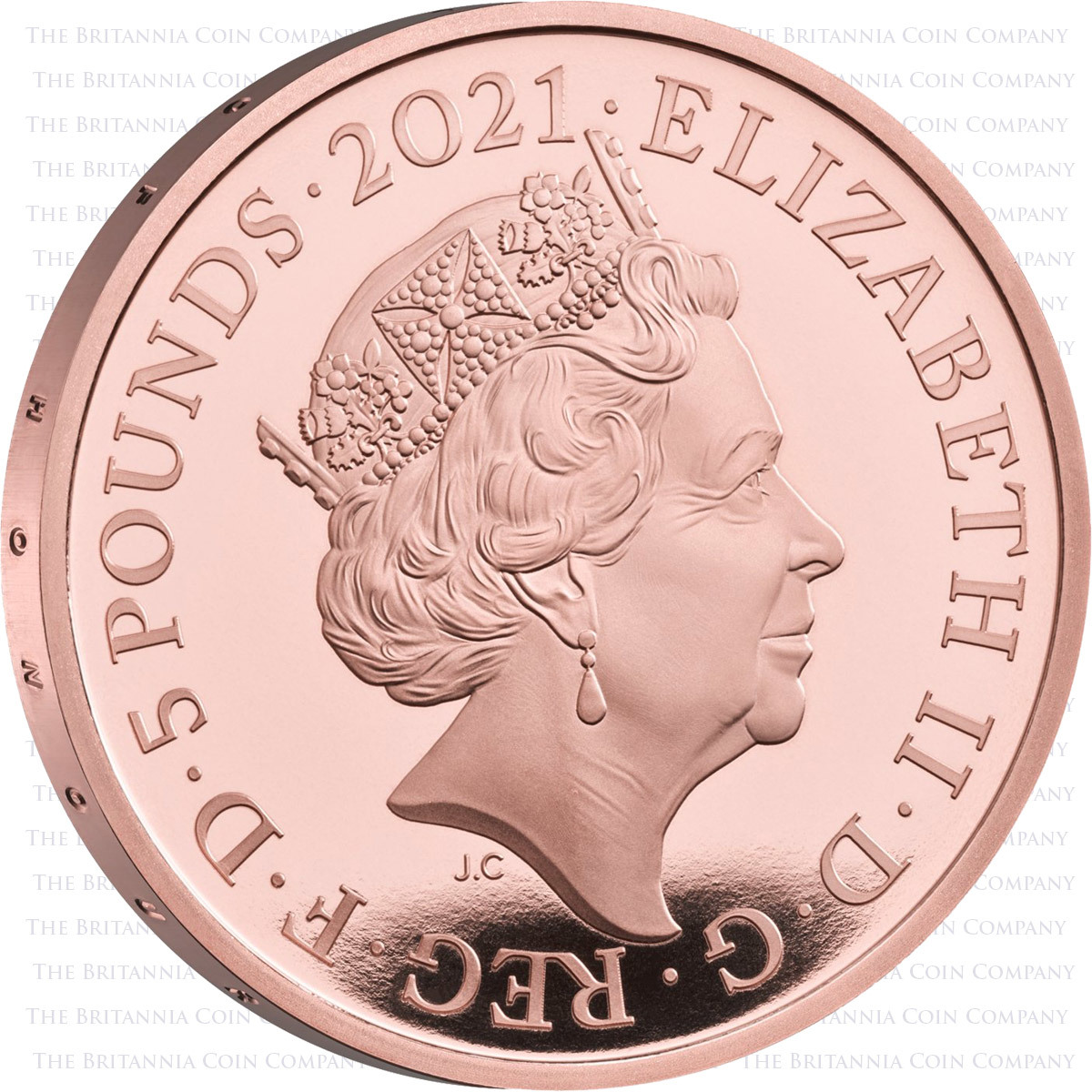 from
£2,590.00
(VAT Exempt)
Created in 2021, this Gold Crown honours HM The Queen, Elizabeth II, on the occasion of her 95th birthday. Since her accession to the throne at just 25-years-old, Her Majesty's reign has witnessed some of the greatest developments and landmark events in the UK's history. Sculptor Timothy Noad took inspiration from The Queen's lifelong love of flowers to create this enwreathed tribute to the EHR design. The obverse presents the 5th Portrait of Her Majesty The Queen, Elizabeth II, by Jody Clark. Only 655 individually boxed coins in the limited presentation.
Quantity
Cost Per Unit
Starts From
1+
£2,590.00
£2,590.00
Track Product
You are not logged in. Please Login to track this product.
Description Summary Specification About £5 / Five Pounds Royal Mint About us

This 2021 £5 Gold Proof coin from The Royal Mint, marks Her Majesty's 95th birthday. Just 655 of these individually boxed coins were struck for the limited presentation.

Designing a Coin Fit for The Queen

Her Majesty's 95th birthday is such a special occasion that two reverse designs by Timothy Noad and Gary Breeze have been created as part of this 2021 commemorative coin series celebrating the royal milestone. This particular coin features the design by Noad. Sculptor and renowned coin designer Timothy Noad took inspiration from The Queen's love of flowers and the natural world. The enwreathed design features a bouquet surrounding the Royal cypher. The bouquet or posy is symbolic of those gifted to The Queen on her birthdays. The depiction of the bouquet includes the emblems of the four nations; a thistle for Scotland, a rose for England, a shamrock for Northern Ireland and a daffodil for Wales. The inscription in The Queen's own words is taken from an oath made in Her Majesty's first televised Christmas Broadcast in 1957, 'MY HEART AND MY DEVOTION'. The promise acts as a motif for the series, appearing on every coin in this collection. The obverse hosts the 5th Portrait of HM The Queen, Elizabeth II, by Jody Clark.

In 2021, Queen Elizabeth II became the first British monarch to reach a 95th birthday. As tradition dictates, Her Majesty celebrated the occasion with two birthdays. Her actual birthday 21st April is marked privately while her second official birthday is celebrated on the second Saturday in June. The tradition began over 250 years ago during the reign of George II. A second official birthday usually takes place during the summer months so celebrations can benefit from better weather.

It is custom to mark The Queen's landmark birthdays with special events:

Aside from the usual commemorative china, Her Majesty's 95th birthday will be a much quieter affair to focus on the Duke of Edinburgh's 100th birthday.

In 1926, Princess Elizabeth Alexandra Mary was delivered at 17 Bruton Street, Mayfair, London, and is the only British Monarch to have been born at a residential address. Elizabeth II's accession to the throne took place on the death of her father, King George VI in 1952. The young Princess, now married to Prince Philip, was just twenty-five-years-old when she became Queen. Her Coronation at Westminster Abbey was the first to ever be televised, watched by 27 million people across the globe.

Her Majesty has devoted her life to public service. In 2015, The Queen crossed a new milestone, becoming the longest reigning British monarch of all time. Her Majesty's reign has witnessed numerous major events, which include:

As Head of State, 14 British Prime Ministers and over 170 worldwide Prime Ministers have also served her since 1952. The Sovereign is also Supreme Governor of the Church of England and Head of the Commonwealth amongst Her Majesty's many titles.

This Gold Proof Crown celebrates The Queen's 95th Birthday in a special design by Timothy Noad. Gold Proof coins are ideal for a serious collector or to be treasured as a piece of history or item of sentimental value. Produced at The Royal Mint, Proof coins represent the highest quality of commemorative coin, benefitting from unrivalled sharpness, detail and finish. Proof coins are struck in precious metals and hand-finished to remove all imperfections. These coins make the perfect gift to hand down to generations of family. They can also be given as a wedding, anniversary, birthday or special occasion present.

The Gold Proof £5 coin or Crown is known for its exceptional minting quality. Although designed by The Royal Mint as a collector's item, Proof coins have legal tender status. As the longest reigning British Monarch, Her Majesty has had Royal Portraits on coins produced by five different artists since her accession to the throne. The first Portrait was created by Mary Gillick (1953), followed by Arnold Machin (1968), Raphael Maklouf (1985), and Ian-Rank Broadley (1998). Most recently, the 5th Portrait, which appears on this coin, was designed by The Royal Mint's Jody Clark in 2015.

This Gold Proof Crown was created at The Royal Mint, the official producer for all UK coinage. The Royal Mint was housed within the walls of the Tower of London for over 500 years before relocating to its current home in Llantrisant, Wales. With a history dating back well over 1,000 years, today The Royal Mint produces currency for over 60 countries. As one of the world's leading Mints, The Royal Mint has also helped to establish Mints across Her Majesty's Commonwealth in Sydney, Perth, Melbourne, Pretoria, Mumbai and Ottawa.

In accordance with a 17th century Royal Mint tradition, Monarchs face the opposite direction to their predecessor on coinage. Therefore, Elizabeth II faces right, while her father, George VI, faced to the left. The Queen's late uncle and the former King, Edward VIII, refused to adhere to this tradition in 1936. He chose to face left like his father, George V. Coincidentally, King Edward VIII's reign was one of the shortest reigns in British history. Edward VIII handed over sovereignty to his younger brother and Elizabeth II's father, George VI.

The Britannia Coin Company of Royal Wootton Bassett was established to offer market leading prices to collectors and investors. Its services include the buying and selling of a wide range of rare, interesting and collectable coins. These include newly minted gold coins like this commemorative Crown as well as silver and other precious metal coins. The company also stocks milled, hammered, ancient and landmark issues from across the globe.

Royal Wootton Bassett, home to The Britannia Coin Company, was awarded Royal status by Queen Elizabeth II in 2011. The Royal status was given as a tribute to the actions of the Royal Wootton Bassett community who lined the streets to pay their respects to fallen soldiers repatriated through the town. It is the first town to be awarded such an honour for over 100 years.