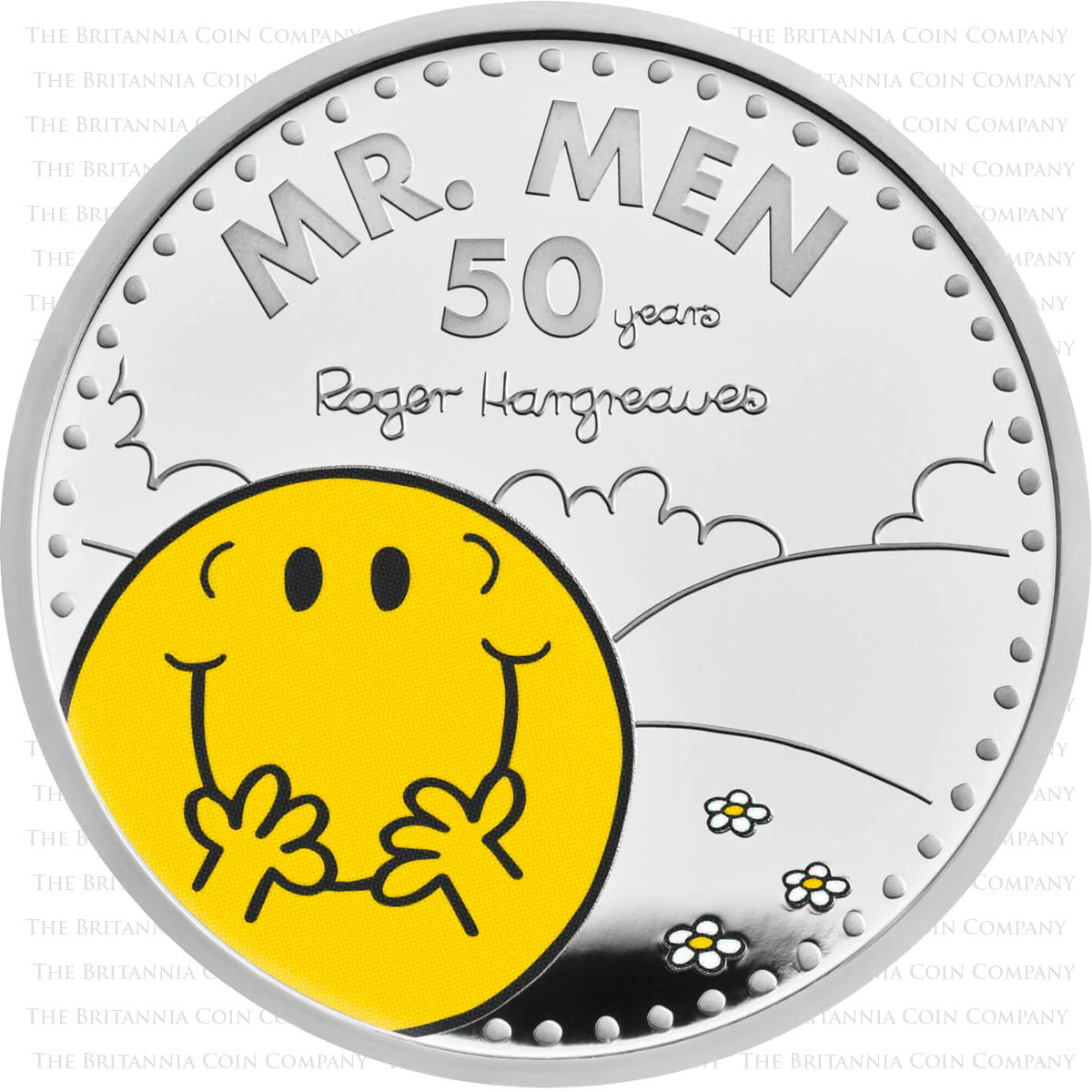 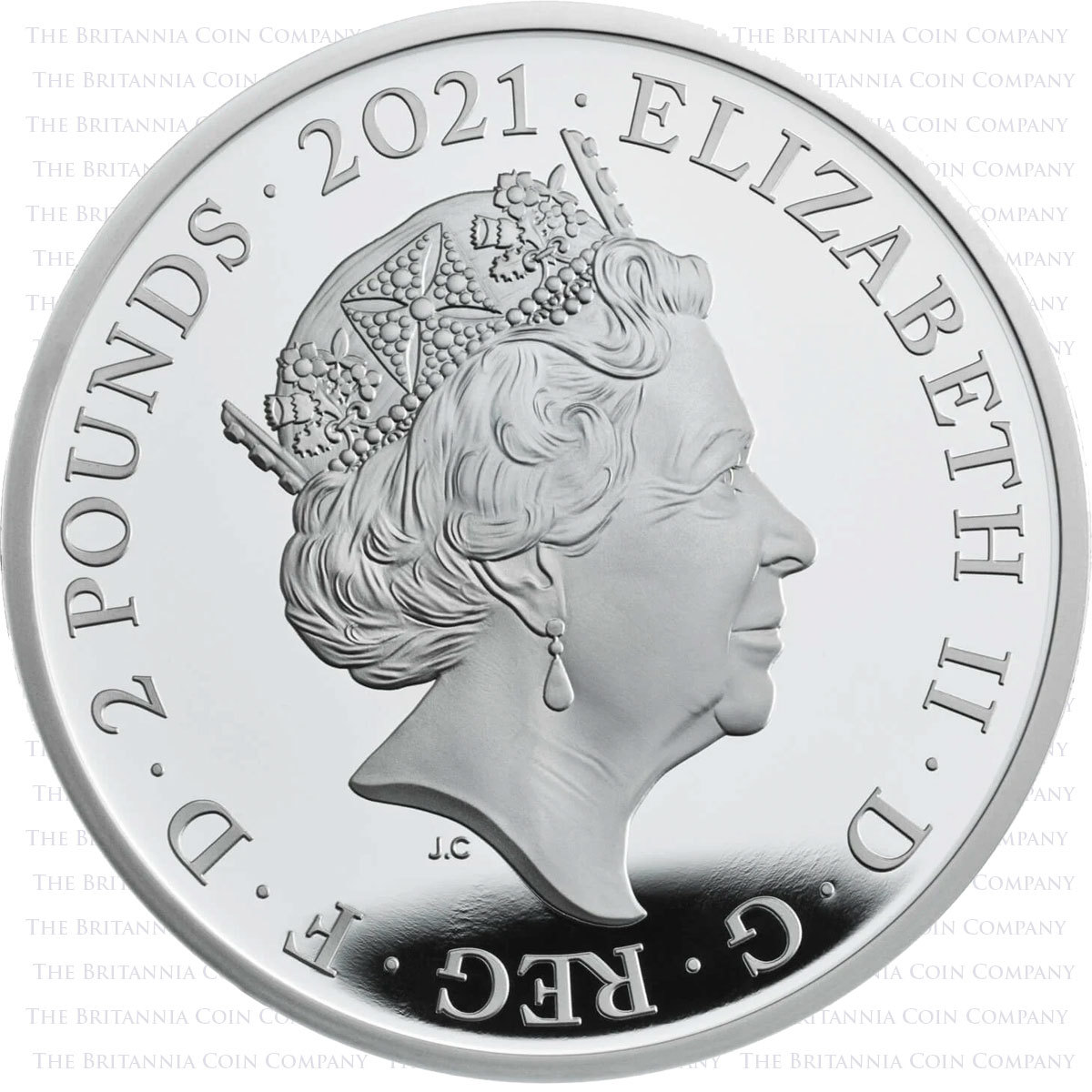 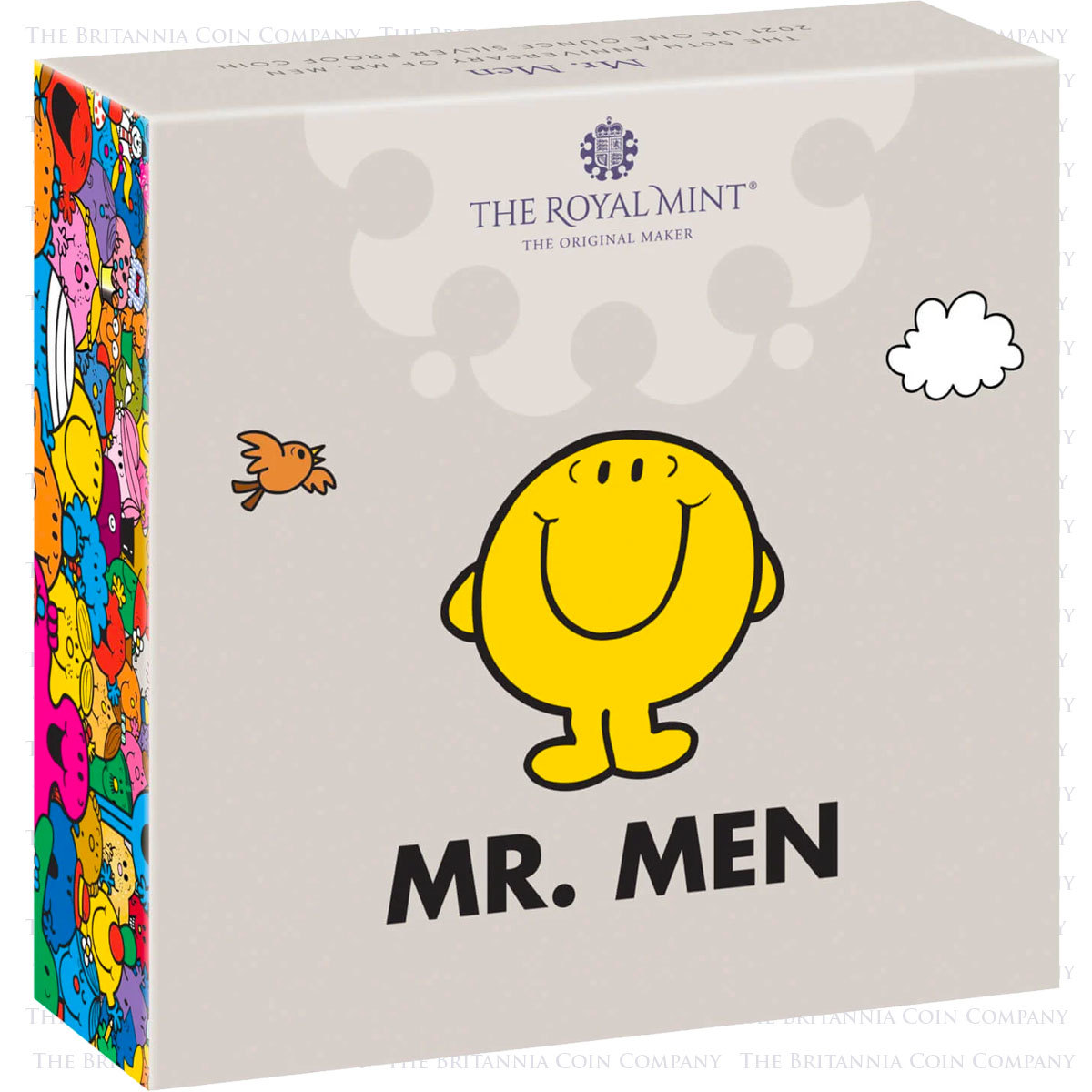 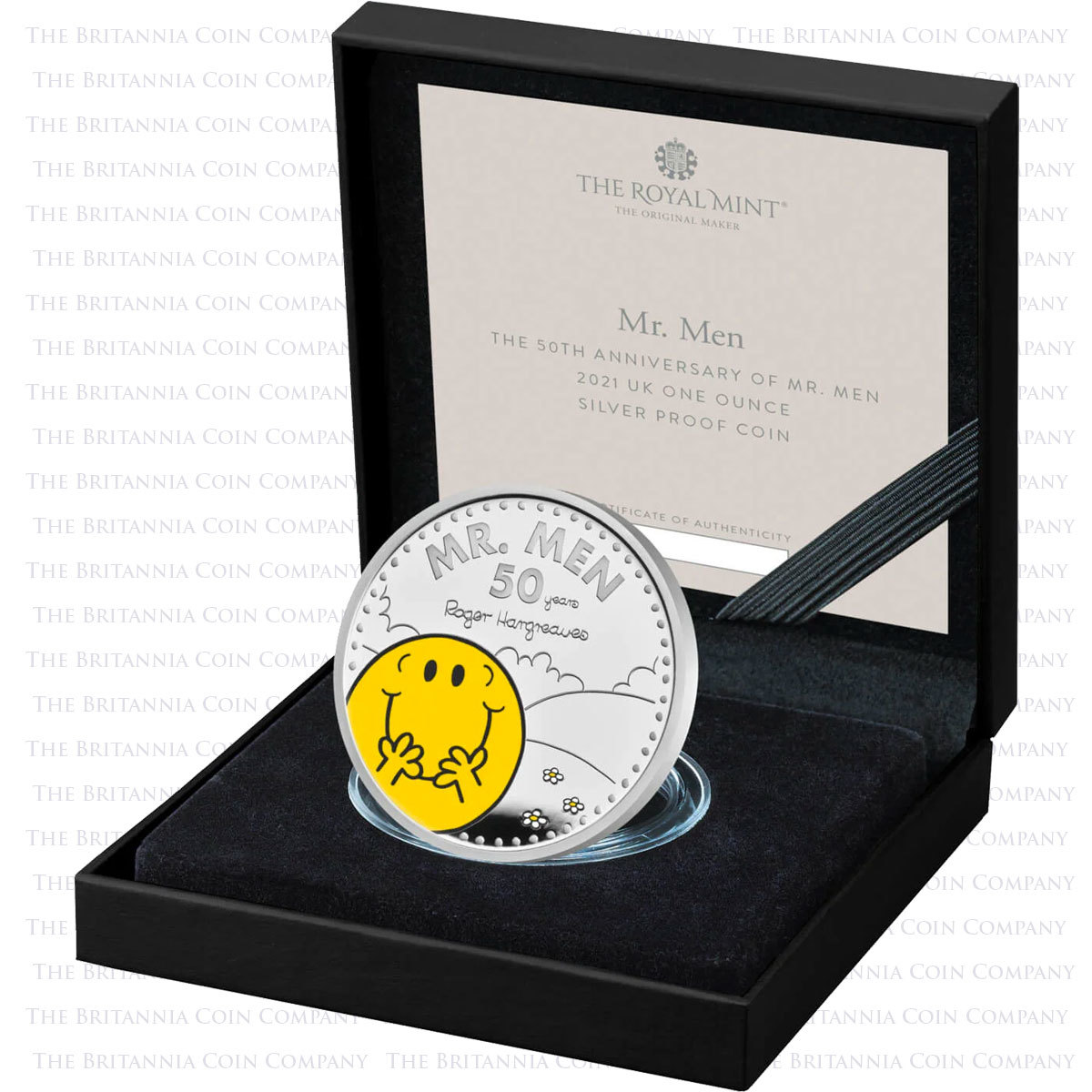 from
£75.00 (excl. VAT)
from £90.00 (inc. VAT)
A 'Mr. Happy' special edition 1oz Silver Proof coin. Part of a three-coin series celebrating 50 years of the Mr. Men childrens' books originally created by Roger Hargreaves in 1971. The Mr. Men book series is often accompanied by Hargreaves' sister collection, Little Miss, first conceived in 1981. The Royal Mint has immortalised Mr. Happy, and a few of his 'Misterland' friends; Mr. Strong, Little Miss Giggles and Little Miss Sunshine, in coinage. With a mintage of just 6,500 individually boxed coins, this Silver Proof coin from The Royal Mint is highly sought-after. Each reverse is designed by the author's son, Adam Hargreaves, who continued to write and illustrate the book series after his father's passing in 1988. This Mr. Happy coin reverse includes a depiction of Roger Hargreaves' signature and Mr. Happy himself with the inscriptions 'Mr. Men' and '50 years'. The obverse hosts the 5th Portrait of HM The Queen by Jody Clark.
Quantity
Cost Per Unit (excl. VAT)
Cost Per Unit (inc. VAT)
Starts From (inc. VAT)
1+
£75.00
£90.00
£90.00
Track Product
You are not logged in. Please Login to track this product.
Description Summary Specification About £2 / Two Pounds Royal Mint About us

'What does a tickle look like?' asked eight-year-old Adam to his father Roger Hargreaves over breakfast. A simple question that launched a 1971 book 'Mr. Tickle', which would soon become the Mr. Men book series. A series treasured by generations of children across more than 24 countries worldwide. The book series also has a popular sister collection, Little Miss, with a range of female characters, which was first developed in 1981.

With a mintage of just 6,500 coins in the limited presentation, this Mr. Happy 1oz Silver Proof coin is one of a three-coin set celebrating the 50th anniversary of the much-loved Mr. Men books by Mr. Hargreaves, with special reverse designs by his son Adam Hargreaves.

Born in West Yorkshire, from an early age Roger Hargreaves was a keen drawer and cartoonist, who later became a copywriter in the advertising world. On creating his first character and book of the same name in the Mr. Men series, 'Mr. Tickle', Roger Hargreaves could never have expected to realise his dream as a children's author and illustrator. Over 1 million copies of 'Mr Tickle' were sold in the first three years.

The beloved children's author had four children with his wife Christine; Adam, Giles, and twins Sophie and Amelia. On the death of Roger Hargreaves in 1988, son Adam, who inspired 'Mr. Tickle', took over the writing and illustrating of the Mr. Men Little Miss collection at just twenty-five years old. Adam Hargreaves also designed the reverse for this special 50th anniversary 'Mr. Happy' coin.

For 50 years, generations of children have enjoyed the Mr. Men Little Miss books, which have sold more than 100 million copies across the globe. Today, there are over 85 characters from 'Misterland' across the series. Each character has a defining personality trait forming its namesake and the story concludes with a moral lesson for children.

In 1974, the series was brought to life by the BBC in a television series narrated by Dad's Army actor Arthur Lowe, better known as Captain Mainwaring. By 1977, the Mr. Men characters featured in comic strips for The Mirror and The Daily Mail newspapers, and also hit the BBC record charts. Numerous Mr. Men merchandise has also been released over the decades from plush toys to art prints. The widely-recognisable characters even played their part in a London Underground 'Mind The Gap' campaign. The 45th anniversary of the successful book series led to the issue of commemorative stamps from The Royal Mail.

This Mr. Men 50th anniversary three-coin series from The Royal Mint makes use of flowers, clouds and rolling hills acting as a motif, alongside an inscription of 'Mr. Men 50 Years' and Roger Hargreaves' signature. Each of these elements together connect the reverses of the 50th anniversary coin series. Accompanying the motif is an illustrated depiction of a Mr. Men character by Adam Hargreaves, son of Roger Hargreaves. Adam Hargreaves admits that Mr. Happy, the character on this coin, was rather surprisingly, the hardest character to recreate from his father's drawings. Alongside the special reverse, the obverse of coin hosts the 5th Portrait of HM Queen Elizabeth II by Jody Clark, first issued in 2015.

This Silver Proof £2 coin represents the highest quality of commemorative coins with an unrivalled finish and detail. Proof coins are hand-finished and inspected to remove imperfections after striking. As the longest reigning Monarch, Queen Elizabeth II has had Royal Portraits on coins produced by five different artists since her accession to the throne.The first Portrait was created by Mary Gillick (1953), followed by Arnold Machin (1968), Raphael Maklouf (1985), Ian-Rank Broadley (1998), and Jody Clark (2015). Jody Clark’s 5th Portrait is presented on this Mr. Happy coin. These types of coins are issued to commemorate special occasions. They are intended to be souvenirs and therefore are usually uncirculated coins.

This 2021 Silver Proof 50th anniversary Mr. Happy £2 coin was created at The Royal Mint, home to the UK’s official coinage. Its history dates back well over 1,000 years long before Roger Hargreaves would create the Mr. Men Little Miss series. The Royal Mint was founded in 886, moving to the Tower of London in 1279 where it remained there for over 500 years. Since 2010 it has operated as Royal Mint Ltd, a company owned by HM Treasury, under an exclusive contract to supply all coinage for the UK although it also produces medals and coins for countries across the world.