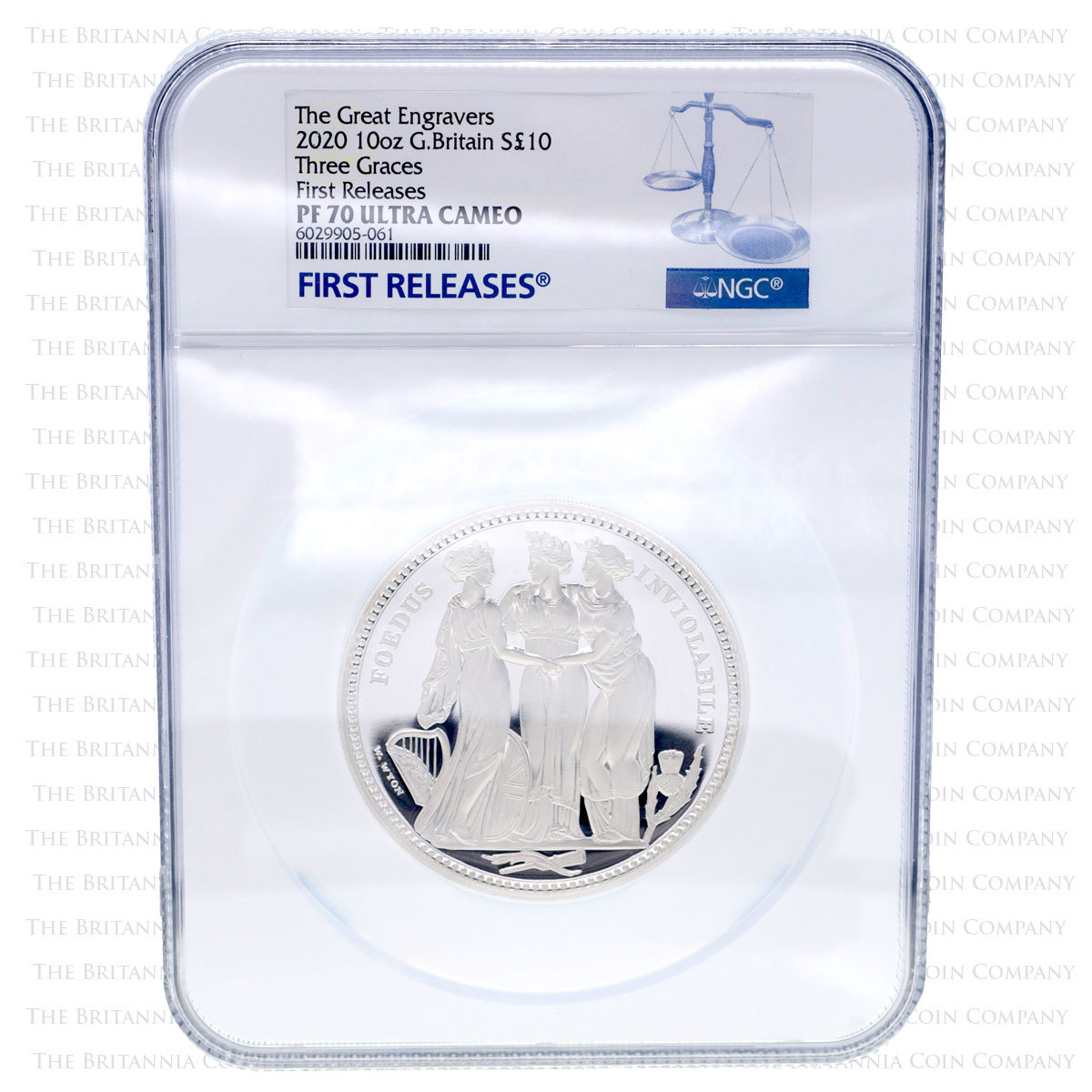 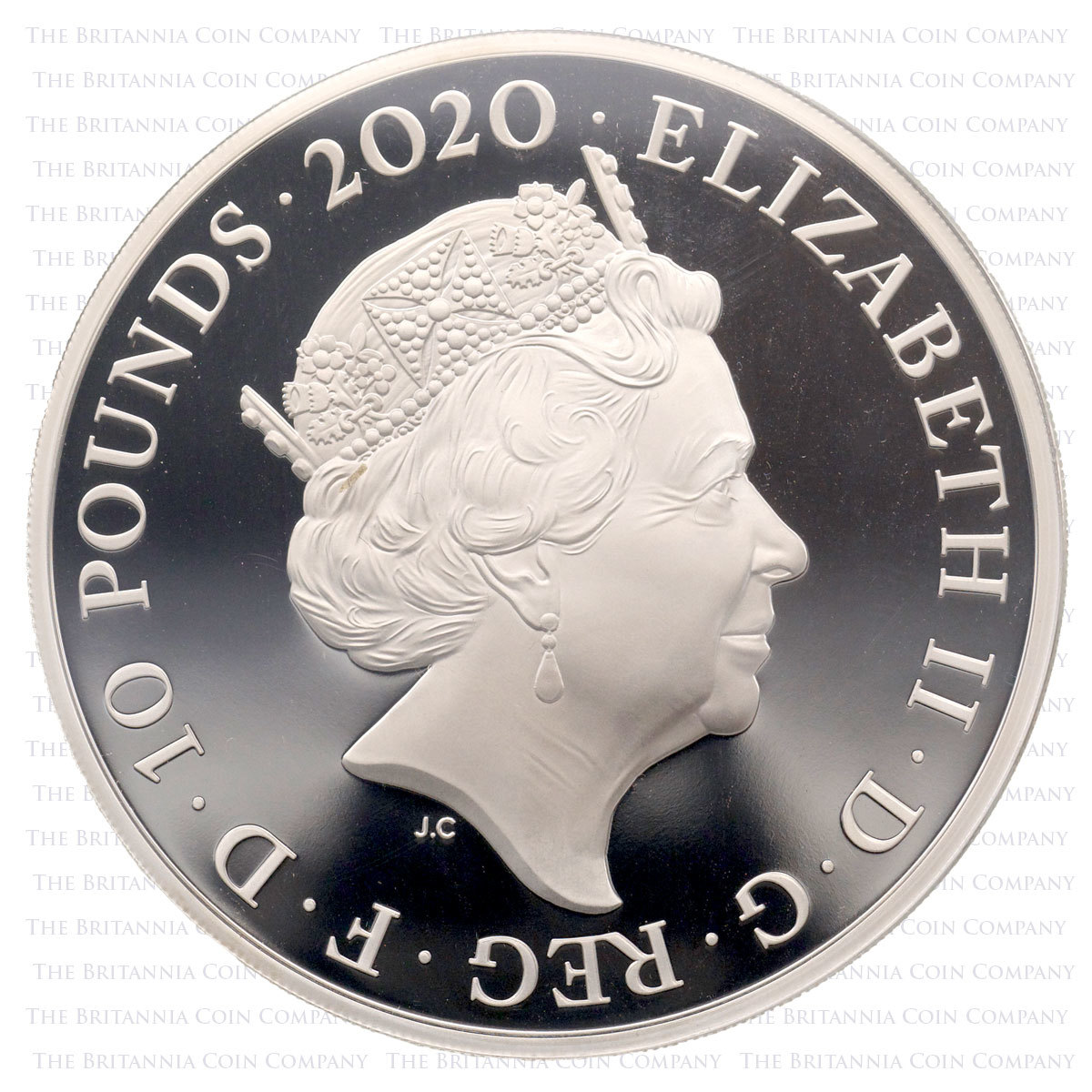 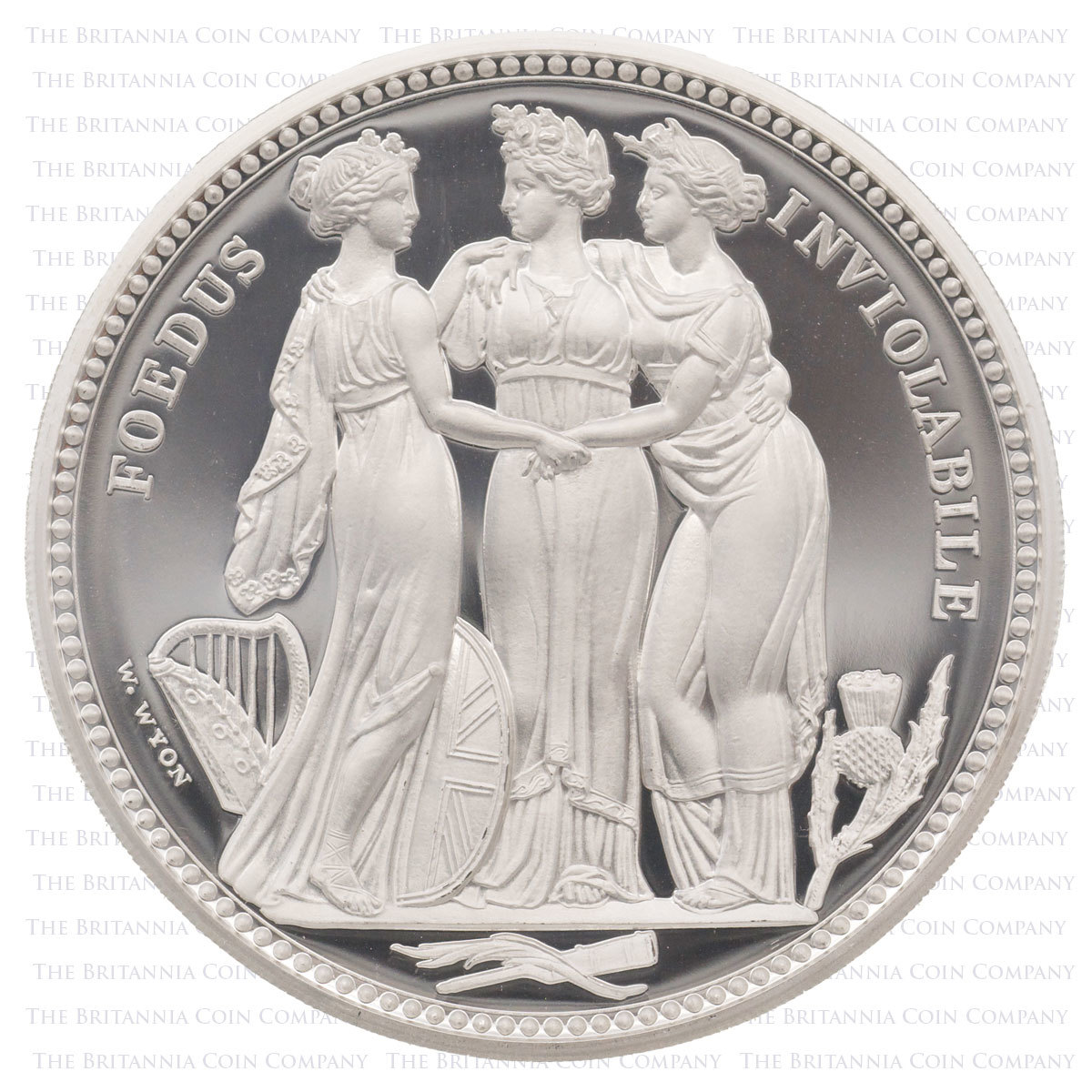 £6,000.00
A Ten Oz Silver Proof addition to The Royal Mint's The Great Engravers series. Featuring a remastered version of William Wyon's celebrated Three Graces design: a Neoclassical masterpiece, crafted in 1817 as a pattern Crown. The Britannia Coin Company is pleased to offer this £10 silver coin, graded by NGC as PF 70 Ultra Cameo and designated as a First Release. Minted on 312.69 grams of .999 Fine Silver. From a limited issue of just 175. Sealed in an NGC holder.
Quantity
Cost Per Unit
Starts From
1+
£6,000.00
£6,000.00
Track Product
You are not logged in. Please Login to track this product.
Description Summary Specification Royal Mint About us

This 10 Oz Silver Proof coin is part of The Royal Mint's sought-after The Great Engravers series. Launched in 2019, The Great Engravers collection celebrates the greatest artists to have worked on British coinage with reissues of their most memorable works. New designs are released annually.

The inaugural issue in The Great Engravers series featured William Wyon's Una and the Lion. The second coin in the series is also the work of the Royal Mint Chief Engraver: a reissue of an extraordinary 1817 pattern crown that never circulated.

The design shows three female figures, representing Ireland, England and Scotland while also evoking the Three Charities of ancient mythology. Wyon was inspired by the Neoclassical trend in decorative arts, garbing his graces in classical dress. It's a much-admired piece and The Great Engravers reissue is an unmissable chance to own this gorgeous piece.

Wyon's iconic reverse is paired with Jody Clark's portrait of Elizabeth II. The obverse legend flags the face value of this Silver Proof coin which is £10.

Your 2020 Three Graces Silver Proof 10 Ounce PF 70 UC First Release is crafted from 312.69 grams of .999 Fine Silver and has a diameter of 65.00 millimetres. As legal tender this silver coin is Capital Gains Tax exempt.

This Three Graces coin has been struck to Proof standard. That means that it has been struck up to six times using hand-finished dies, reproduced from Wyon's originals. Each coin is then carefully inspected for imperfections. It's a labour intensive process but produces a truly remarkable finish. There's no better way to enjoy the beauty of the Three Graces.

These Silver Proof Ten Ounce coins have been independently graded by the Numismatic Guaranty Corporation as PF 70 Ultra Cameo.

‘PF 70' refers to a Proof coin that has no post-production imperfections at 5x magnification. ‘Ultra Cameo' is a designation only applied to Proof coins and indicates that the fields are deeply mirrored and the devices heavily frosted, creating a strong and attractive contrast.

All this means that your 2020 Three Graces Silver Proof 10 Ounce PF 70 First Release has been formally recognised as a flawless and appealing collectors piece.

This Ten Ounce silver coin has also been given an additional designation by NGC. The ‘First Releases' designation identifies a coin that has been passed to NGC or an approved depository within 30 days of its release.

You can verify the grade and First Release designation assigned to this coin by checking the code printed on the NGC certification label against their online database. Be aware that the code in our image may not match the code on the item you receive.

These 2020 Ten Ounce Silver Three Graces coins are from a limited issue of just 175: one of the smallest mintages for any piece released in The Royal Mint's The Great Engravers series. Our stock of this scarce issue is selling fast so we would advise making your purchase swiftly.

Your PF 70 UC Three Graces comes sealed in its Numismatic Guaranty Corporation holder, rather than in typical packaging from The Royal Mint. NGC holders are designed for long-term preservation and security, ensuring that your 2020 Three Graces Silver Proof 10 Ounce PF 70 UC First Release arrives and remains in impeccable condition.