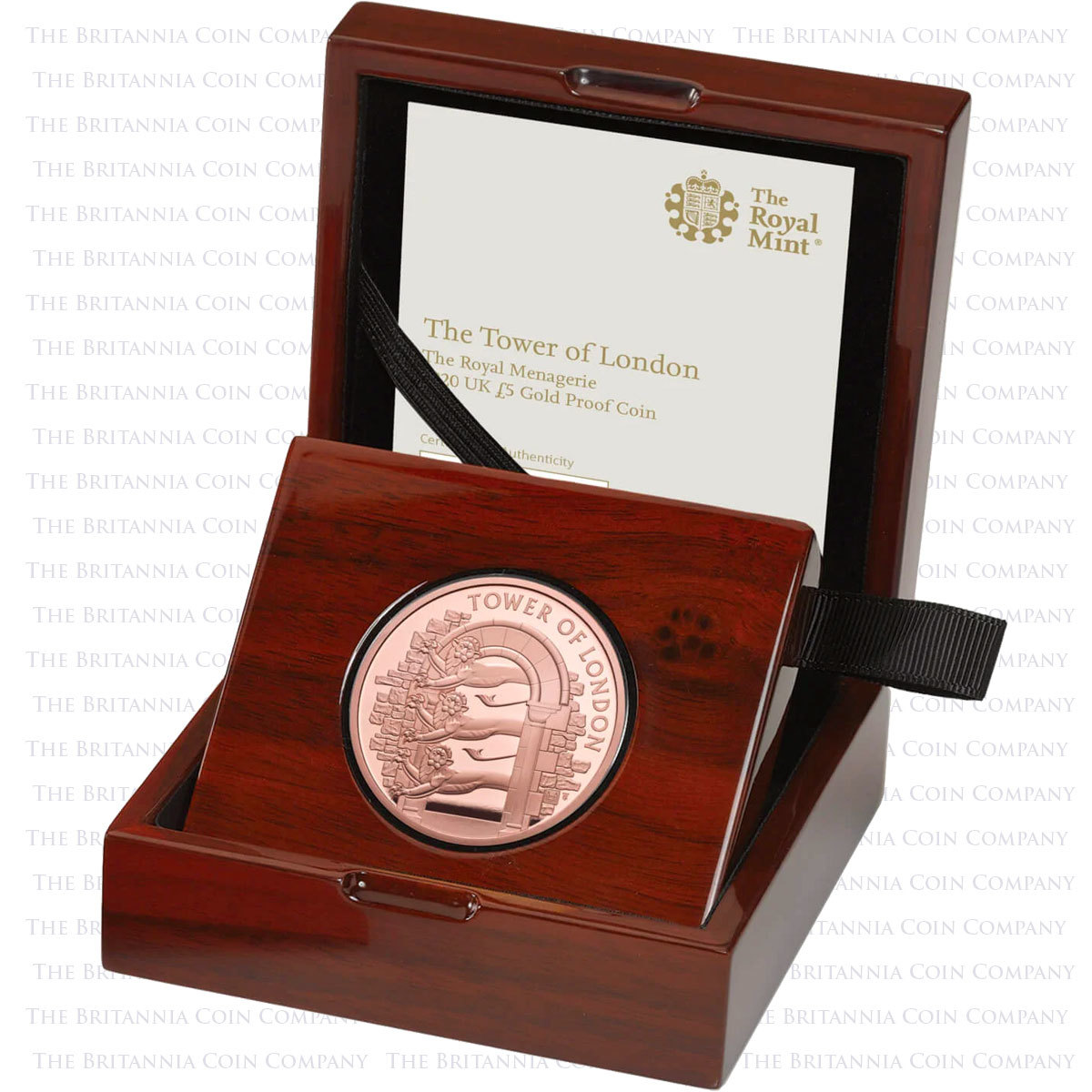 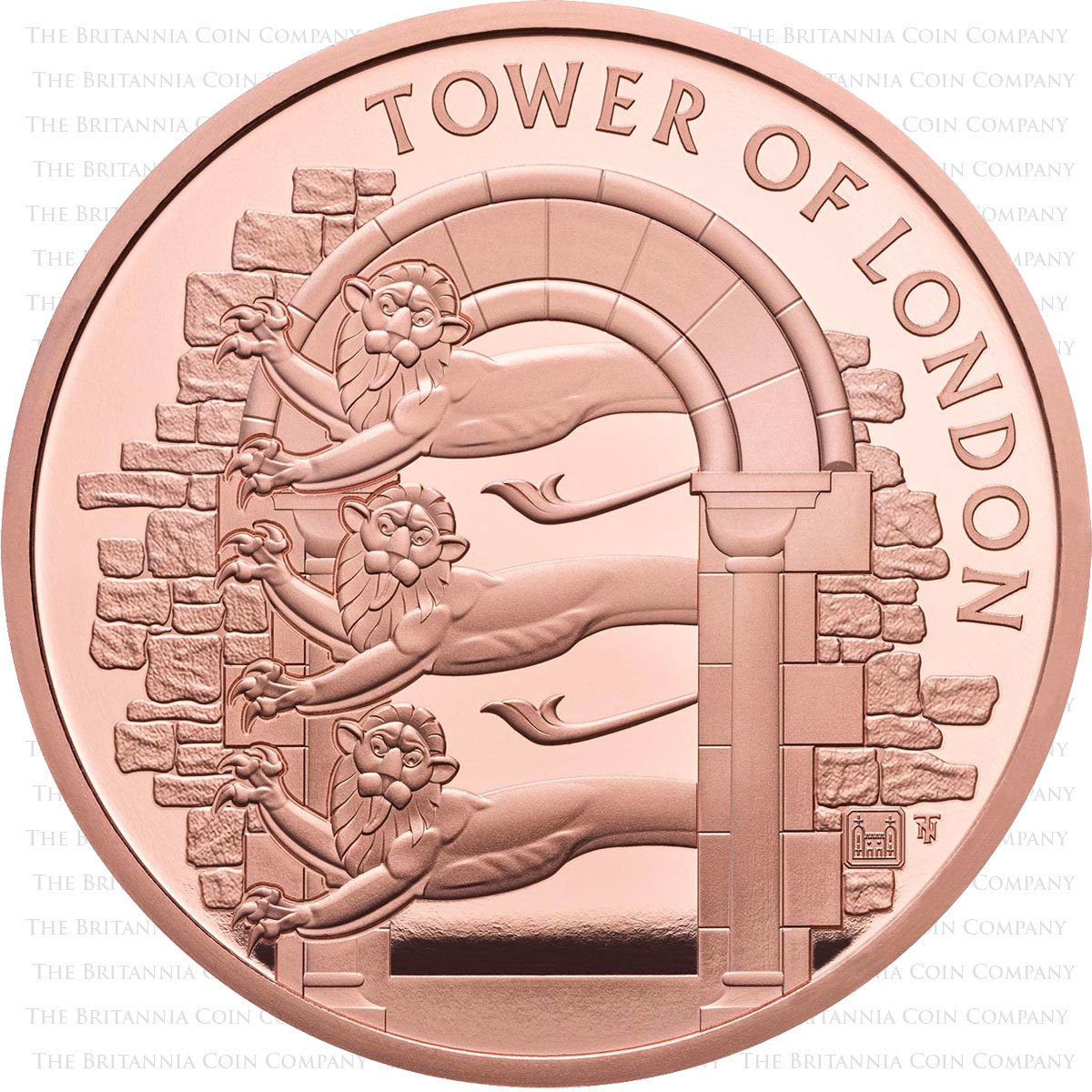 from
£3,250.00
(VAT Exempt)
Did you know that the Tower of London used to house a zoo? This Five Pound coin from the popular Tower of London collection, celebrate’s the ancient fortress’ role as a Royal Menagerie. Timothy Noad’s attractive three lion design nods to both the creatures and monarchs that called the Tower home. Minted in 39.94 grams of 22 carat gold (91.67% purity) this Five Pound coin is offered in a glorious proof finish and is one of a limited presentation issue of just 125. You’ll receive your 2020 Tower of London The Royal Menagerie £5 Gold Proof Crown in its original box from The Royal Mint alongside its numbered certificate of authenticity.
Log in to get notified when this product is back in stock.
Track Product
You are not logged in. Please Login to track this product.
Description Summary Specification Royal Mint About us

A Five Pound Gold Proof addition to Tower of London collection, celebrating the castle's historic role as a royal menagerie.

The 2020 Tower of London The Royal Menagerie £5 Gold Proof Crown is part of the second release in a popular collaboration between The Royal Mint and Historic Royal Palaces. This collection celebrates the various uses of the fortress down the centuries.

Four designs were offered as part of the 2020 Collection: The Infamous Prison, The White Tower, The Royal Mint and The Royal Menagerie. Coins in this collectible series have been issued in Gold Proof - like this example - as well as Brilliant Uncirculated and Silver Proof editions.

Noad draws on his deep understanding of heraldic history for his 2020 Tower of London The Royal Mint £5 Gold Proof Crown design, linking the story of the Royal Menagerie to the Kings and Queens who maintained this fascinating institution.

The Tower of London's Menagerie

From as early as 1210, these beasts were kept in the Tower of London. By the 18th century the Tower Menagerie was open to visitors. Admission cost three halfpennies or a cat or dog to be fed to the lions.

All the real beasts were moved to London Zoo in the 1830s but the 2020 Tower of London The Royal Menagerie £5 Gold Proof Crown pays homage to a fascinating aspect of the Tower's history.

The Three Lions and the Arms of England

Among the Royal Menagerie's earliest residents were three lions given to Henry III as a wedding present. This was a meaningful gift: Henry and other members of the Plantagenet dynasty used three lions passant (walking) as their personal arms.

Over the centuries this heraldic motif came to be seen as a symbol of England. You'll see this trio of fearsome beasts as part of the Royal Arms of the United Kingdom and being used as an emblem for various English national sports teams.

This 2020 Tower of London The Royal Menagerie Crown coin is minted in 39.95 grams of 22 carat gold. That's a fineness of 916.7. The pure gold content of this piece is 36.61 grams or 1.1771 troy ounces. Struck to proof standard, you are guaranteed a beautiful piece, made to be appreciated.

Like all the gold coins in this series the 2020 Tower of London The Royal Menagerie £5 Gold Proof Crown features an edge inscription identifying its subject, in this case ‘THE ROYAL MENAGERIE'. The obverse shows Jody Clark's definitive portrait of Elizabeth II with the year and denomination.

A Collectible Tower of London Coin

Whether the 2020 The Royal Menagerie £5 Gold Proof Crown completes your collection of Tower of London coins or represents your first purchase, we think this is a great addition.

This series reminds us of everything we love about collectible coins from The Royal Mint: a rich history, great designs from top artists and an unmatched attention to detail. As one of only 125 issued in this limited edition presentation, its worth picking this piece up now.

Your 2020 Tower of London The Royal Menagerie £5 Gold Proof Crown comes in its original The Royal Mint presentation box with a booklet and a numbered certificate of authenticity.