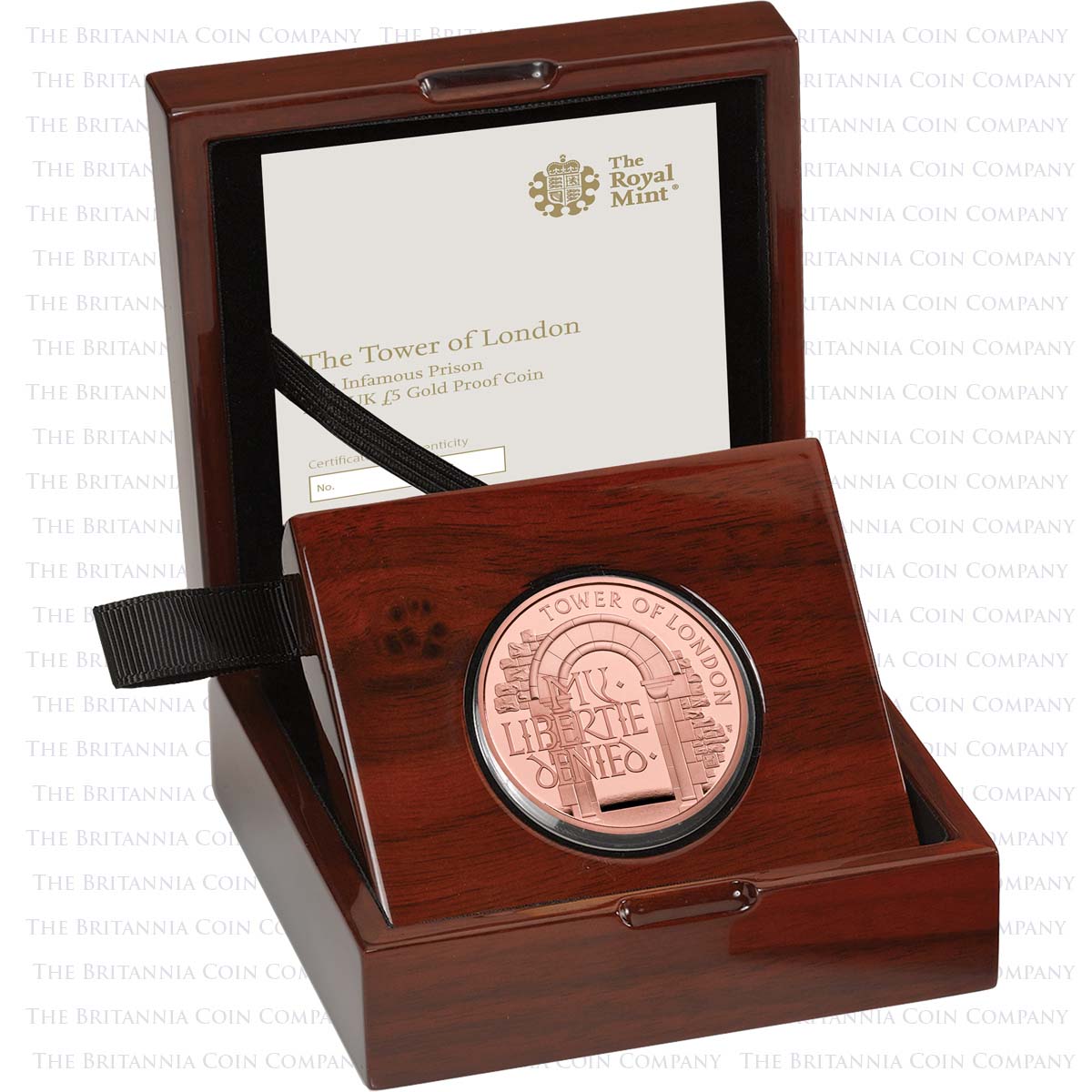 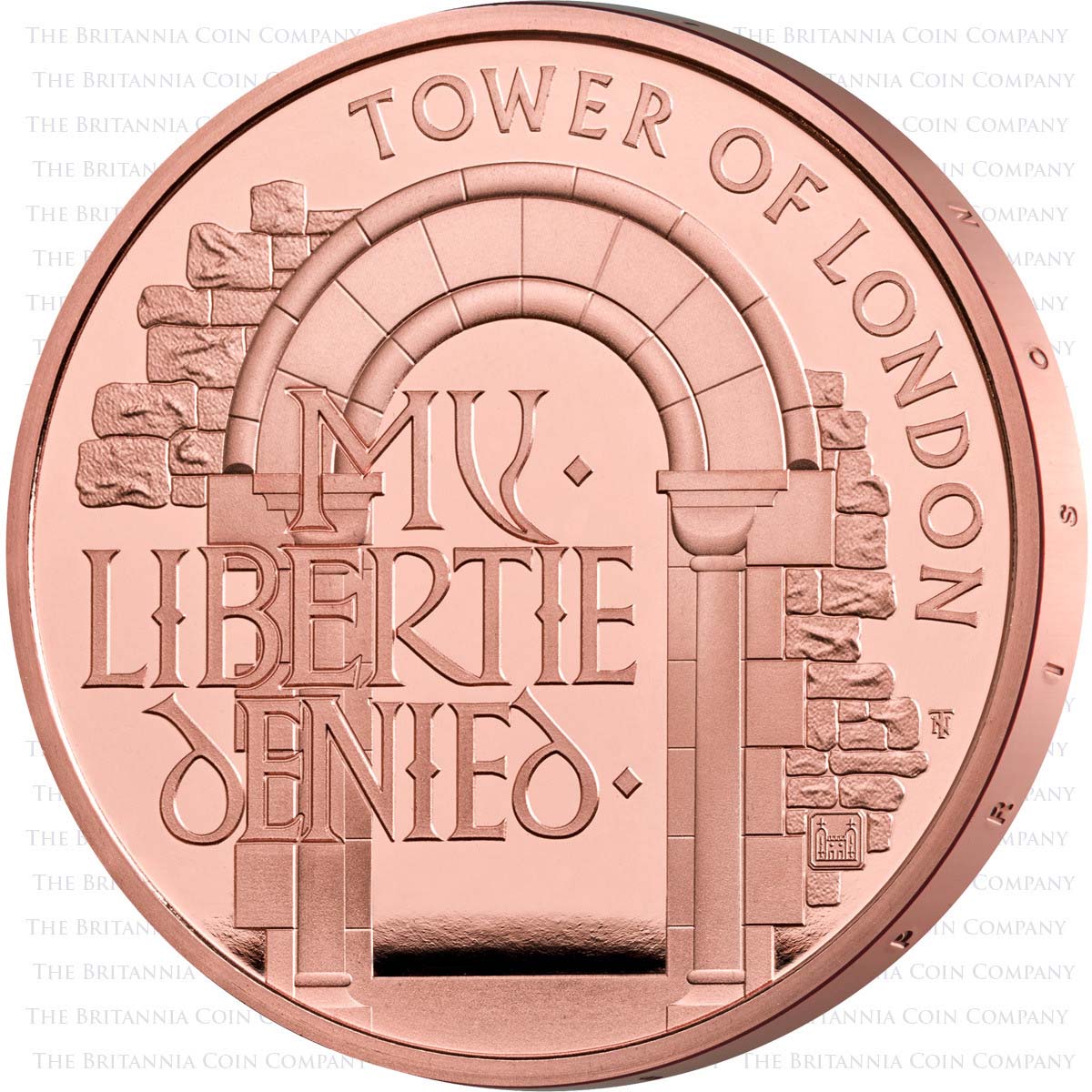 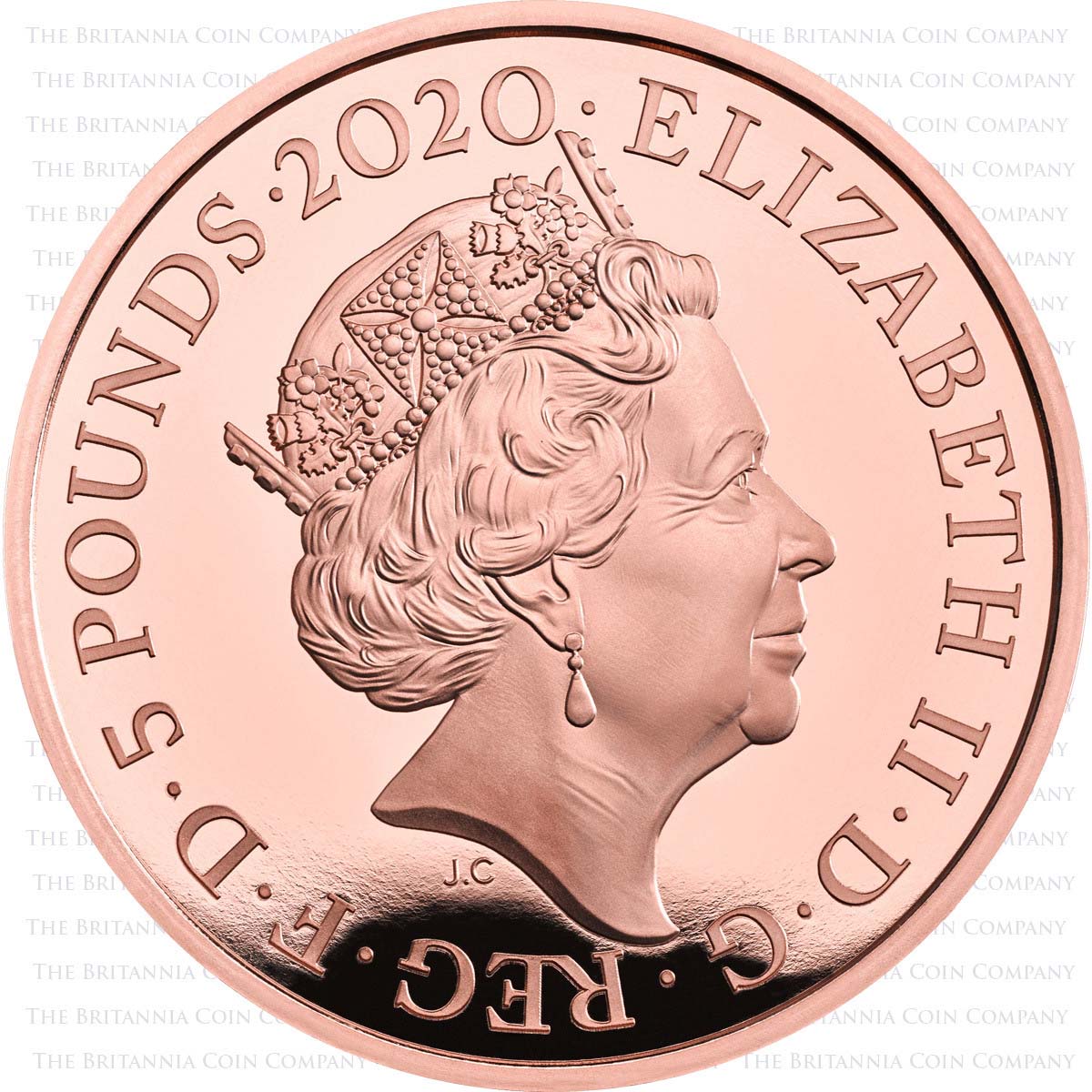 from
£3,250.00
(VAT Exempt)
From a limited edition presentation of just 125, this addition to the 2020 Tower of London collection reflects the ancient fortress’ role as a place of imprisonment. The Infamous Prison design by Timothy Noad is here struck on 39.94 grams of 22 carat gold. Offered in an unbeatable Proof finish, this Five Pound gold coin is both VAT and Capital Gains Tax free. Receive your 2020 Tower of London The Infamous Prison £5 Gold Proof Crown in it is original packaging from The Royal Mint, in collaboration with Historic Royal Palaces. Also included is an information booklet and a numbered certificate of authenticity,
Log in to get notified when this product is back in stock.
Track Product
You are not logged in. Please Login to track this product.
Description Summary Specification Royal Mint About us

This 2020 Five Pound Gold Proof coin tells the bloody history of the Tower of London's role as a prison: an intriguing addition to this collection from The Royal Mint.

The 2020 Tower of London The Infamous Prison £5 Gold Proof Crown is part of the second release in a popular collaboration between The Royal Mint and Historic Royal Palaces. This collection celebrates some of the various functions the ancient fortress has served down the centuries.

Four designs were offered as part of the 2020 Collection: The Royal Mint, The Royal Menagerie, The White Tower and The Infamous Prison. Coins in this collectible series have been issued in Gold Proof - like this example - as well as Brilliant Uncirculated and Silver Proof editions.

Inside the World's Toughest Prison

While the Tower of London was furnished as a luxurious royal residence, it was also used for centuries to contain high profile prisoners. While royal and noble prisoners might be kept in relative comfort - deprived only of their liberty - unlucky prisoners were tortured.

Despite the Tower's reputation for gruesome punishments, only seven people were executed in the Tower before the twentieth century. This number included three English Queens: Anne Boleyn, Catherine Howard and Lady Jane Grey. The last Tower execution took place in August 1941.

The Mystery of the Princes in the Tower

Among the most famous prisoners held in the Tower of London were Edward V and his younger brother Richard. They were sent there by their uncle who would become Richard III after the boys disappeared without a trace. Two small skeletons were discovered in the Tower centuries later.

Victorian tourists were entranced by the gothic tale of the Princes as well as many other gruesome stories from the Tower's long history. It's this unmatched reputation for horror that inspires the 2020 Tower of London The Infamous Prison £5 Gold Proof Crown  which bears the edge inscription 'THE INFAMOUS PRISON'.

Timothy Noad's reverse for the 2020 Tower of London The Infamous Prison £5 Gold Proof Crowns a subtle evocation of the Tower's chilling past.

Noad is known for his medieval-style calligraphy and illuminations. For this design he has been inspired by the extensive graffiti found at the tower. His Infamous Prison reverse features an extract from an anonymous inscription, found in the Bell Tower which reads: ‘BY TORTURE STRANGE MY TROUTH WAS TRIED YET OF MY LIBERTIE DENIED'.

The lettering - rendered in a Tudor font - is set against the image of a Norman-style window: a unifying feature of coins in the 2020 Tower of London collection.

Timothy Noad's reverse is paired with Jody Clark's fifth definitive portrait of Elizabeth II. The obverse also features the denomination: ‘FIVE POUNDS'. As this coin is legal tender in the UK, the 2020 Tower of London The Infamous Prison £5 Gold Proof Crown is Capital Gains Tax exempt. The gold content of this piece means that it is also VAT free in the UK.

The 2020 Tower of London The Infamous Prison £5 Gold Proof Crown is composed of 39.94 grams of 22 carat gold. That's a fineness of 916.7. The pure gold content of this piece is 36.61 grams or 1.1771 troy ounces. Struck to proof standard, you are guaranteed a beautiful piece, made to be appreciated.

Whether the 2020 Tower of London The Infamous Prison £5 Gold Proof Crown completes your collection of Tower of London coins or represents your first purchase, we think this is an excellent addition.

This series reminds us of everything we love about collectible coins from The Royal Mint: a rich history, great designs from top artists and an unmatched attention to detail. As one of only 125 issued, its worth picking this piece up now.

Your 2020 Tower of London The Infamous Prison £5 Gold Proof Crown comes in its original The Royal Mint presentation box with an informative booklet and a numbered certificate of authenticity.