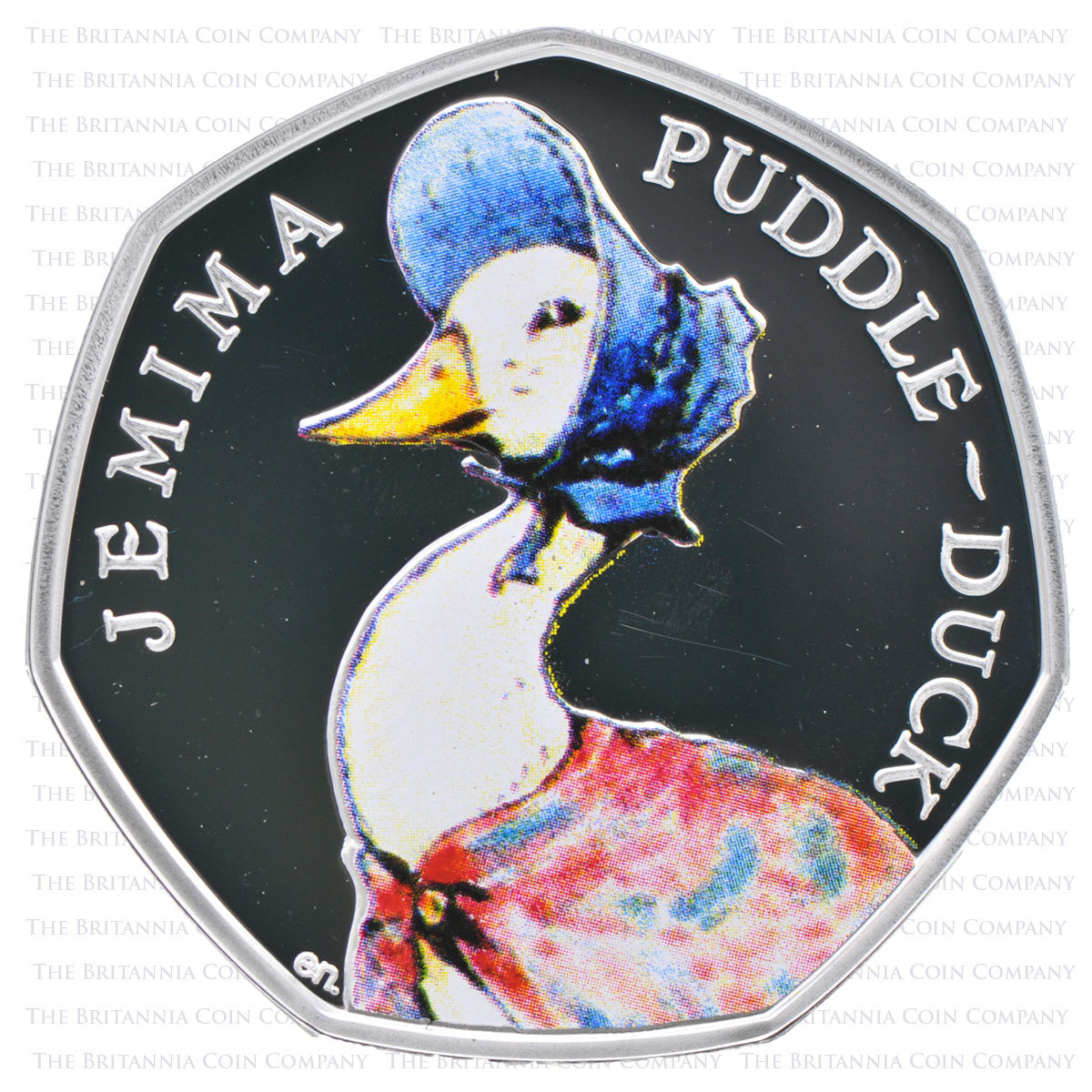 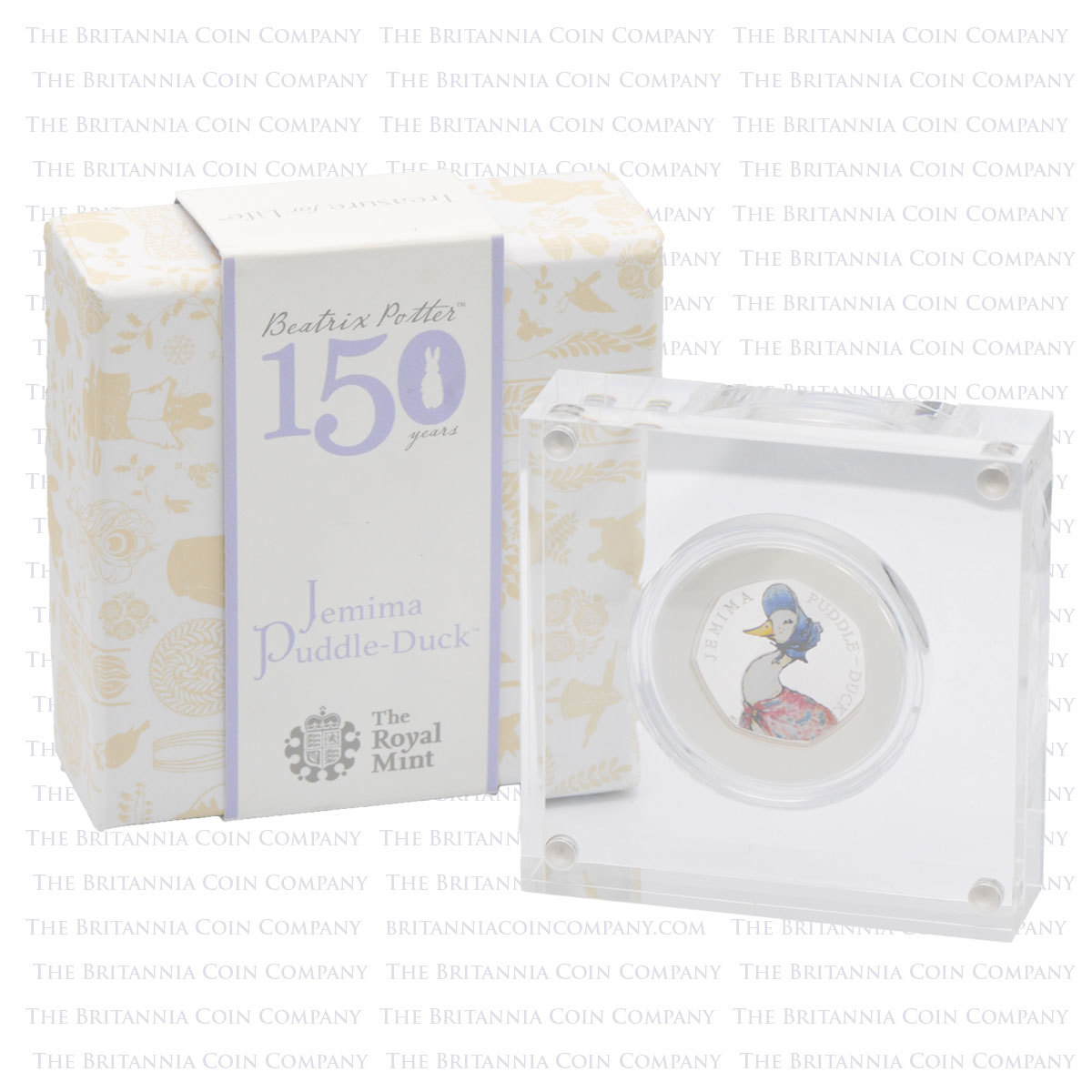 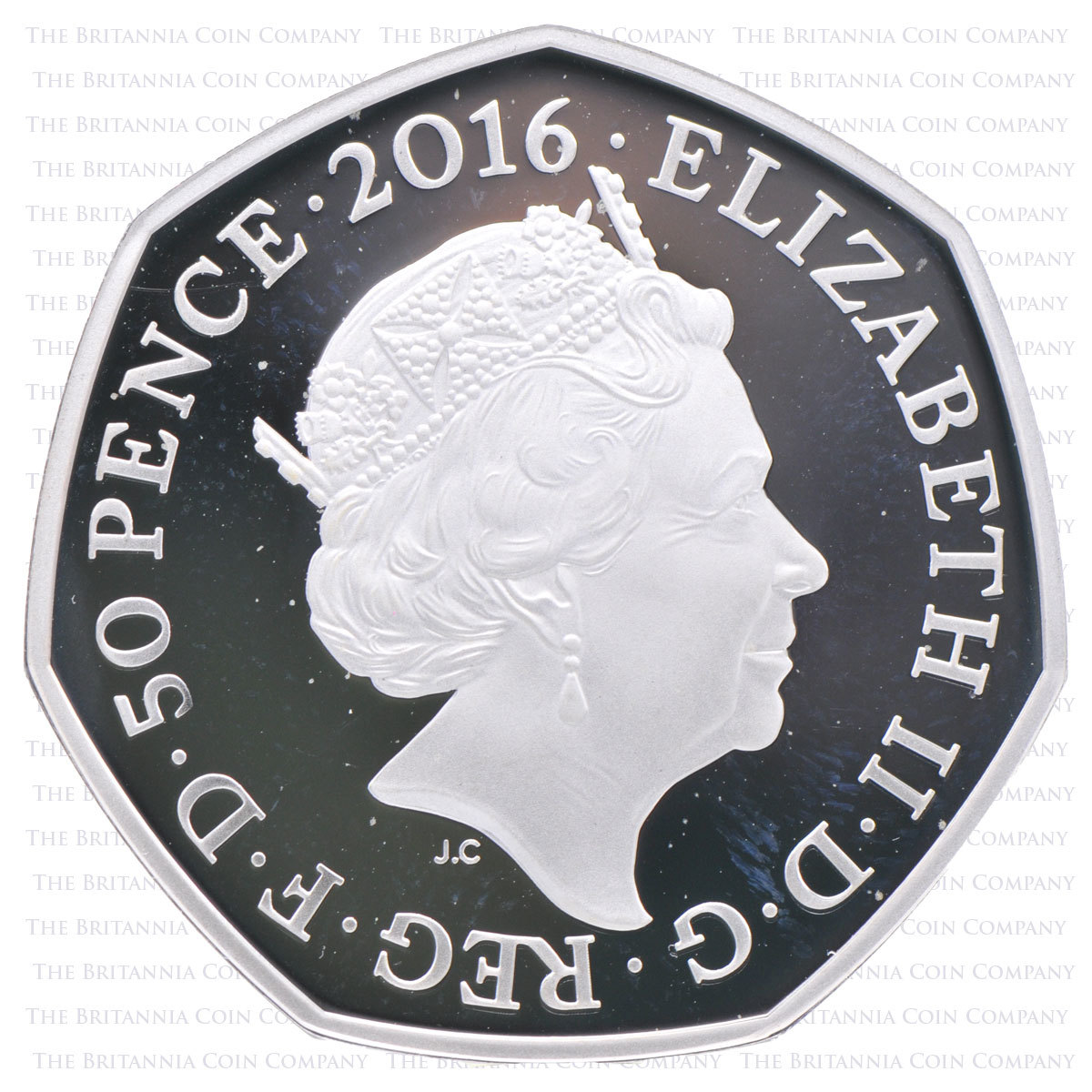 from
£150.00
This 'Jemima Puddle-Duck' special edition 50p Silver Proof coin is one of a set celebrating the 150th Anniversary of beloved children's author, Beatrix Potter. The Royal Mint has immortalised protagonist Peter Rabbit and his animal friends, including Jemima Puddle-Duck, in coinage since 2016. This new release acknowledges the sesquicentennial birthday of Beatrix Potter, by immortalising the main character of her twelfth 'little tales' book, The Tale of Jemima Puddle-Duck, in coinage. The designer, The Royal Mint's Emma Noble, has engraved reconstructions of Potter's highly accurate drawings into the coin. The coin is presented in a perspex casing within a box and sleeve decorated with recreations of the author's illustrations. Don't miss your chance to purchase this next chapter of the limited edition Royal Mint series celebrating 150 years of the best-selling writer behind the little tales, to treasure for life.
Log in to get notified when this product is back in stock.
Track Product
You are not logged in. Please Login to track this product.
Description Summary Specification Royal Mint About us Reviews

This Jemima Puddle-Duck Silver Proof 50p coin, released in 2016, is one piece of a collectible series from the Royal Mint to coincide with the 150th Birthday of much-loved children's author, Beatrix Potter. Created by Royal Mint designer Emma Noble, this special edition coin features a reconstructed illustration of The Tale of Jemima Puddle-Duck's namesake, created by Miss Potter. The coin's obverse hosts the 5th Portrait of HM Queen Elizabeth II by Jody Clark. The first coin to mark the beginning of this series featured a portrait of the author herself, Beatrix Potter. Designer Emma Noble paid homage to her legacy with a nostalgic font used for the inscription. The accompanying coins in the collection feature characters from other works by Potter including; Peter Rabbit, Jemima Puddleduck, Mrs. Tiggy Winkle, Squirrel Nutkin, Tom Kitten, Mr. Jeremy Fisher, Benjamin Bunny, The Tailor of Gloucester, Mrs. Tittlemouse and Flopsy Bunny. Each character coin will be encased in bespoke boxes and sleeves with elements of storylines from the author's illustrated works.

Born Helen Beatrix Potter, the author's isolated and wealthy upbringing with her brother Bertram, led to the pair keeping an eccentric range of animals in their nursery including; hedgehogs, caged birds, two lizards, a snake named Sally and a frog called Punch, among others. Combined with holidays in the Lake District and Scotland, Beatrix's unusual childhood grew her love of natural science, which became her specialism alongside writing and conservational activities. Her interest in animals and handmade letters she created for her former governess' children, pathed the way for the creation of her most famous character, Peter Rabbit, in the 1902 children's book, The Tale of Peter Rabbit, the focus of this Royal Mint collection.

Since 2016, The Royal Mint has continued to pay tribute to Beatrix Potter's cherished creations on passing her 150th Birthday. The first arrival was a close-up portrait of Peter Rabbit on a Silver Proof 50p coin, accompanied by his friends in Gold and Silver Proofs in addition to a series of Brilliant Uncirculated coins.The design of the coins are an intricate tribute to the best-selling author that numismatics will love and designer Emma Noble has annually revisited the artwork resulting in a new engraving of Peter Rabbit and new characters from her other little tales available each year since 2016, making the edition unique and true to Beatrix Potter's paintings of her characters.

This 2016 Silver Proof commemorative Jemima Puddle-Duck 50p coin was minted at The Royal Mint, which is the designated place for the UK to mint coins. It dates back well over 1,000 years and is a Government-owned company.

Items as described
Julie Christie 22nd January 2021
You may also like...
Here are some related products

Very professional and friendly
Dean Rothwell
I like the sovereigns I've received so far, I've ordered 6 and received 6 different heads, so it's been a great way to start a collection. It would be great if you had some European and north American sovereign sized coins. The coins I recieved are well packaged and delivered in good time.
Mark Day
Once again communication and customer service was first class
Gary P
Not sure you can improve - it was excellent, polite, friendly service from the first phone call to the delivery just 2 days later
Felicity Greenfield
Good website. Good prices. Item's as described. Very well packaged. Delivered within 24hrs of ordering
Julie Christie
Once again, simple straightforward transaction and prompt quick delivery. Great value and nice coins. Highly recommends.
John Swallow
Excellent service. Beautiful coins and fast delivery. Easy to use website. I found an excellent range of world coins Will definitely be using this company again. Thank you.
Mohammed Shahed
Waarom die wachtwoorden en logins om alleen het traject te kennen : geeft verwarring, weeral een wachtwoord !
Erik G
Speedy delivery of my Royal Mint coins well packaged and good follow up. Price was good and quantity discount given. I would buy from them again for certain.
Russell Franks
Dispatched next working day and delivered securely. Great service thank you
Michael Snook
This website uses cookies to ensure that you have the best experience. Read our Privacy Policy and Terms and Conditions for more information.