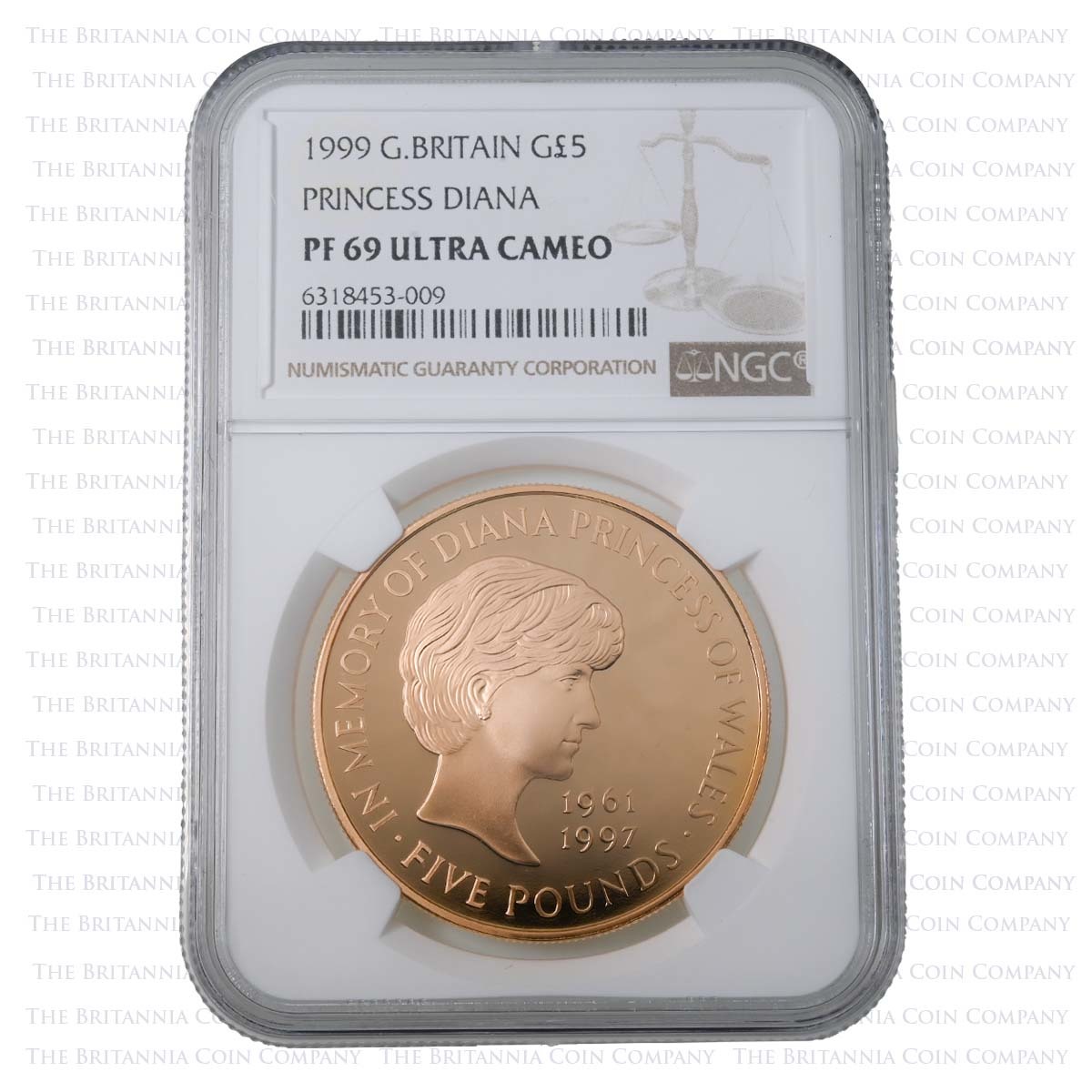 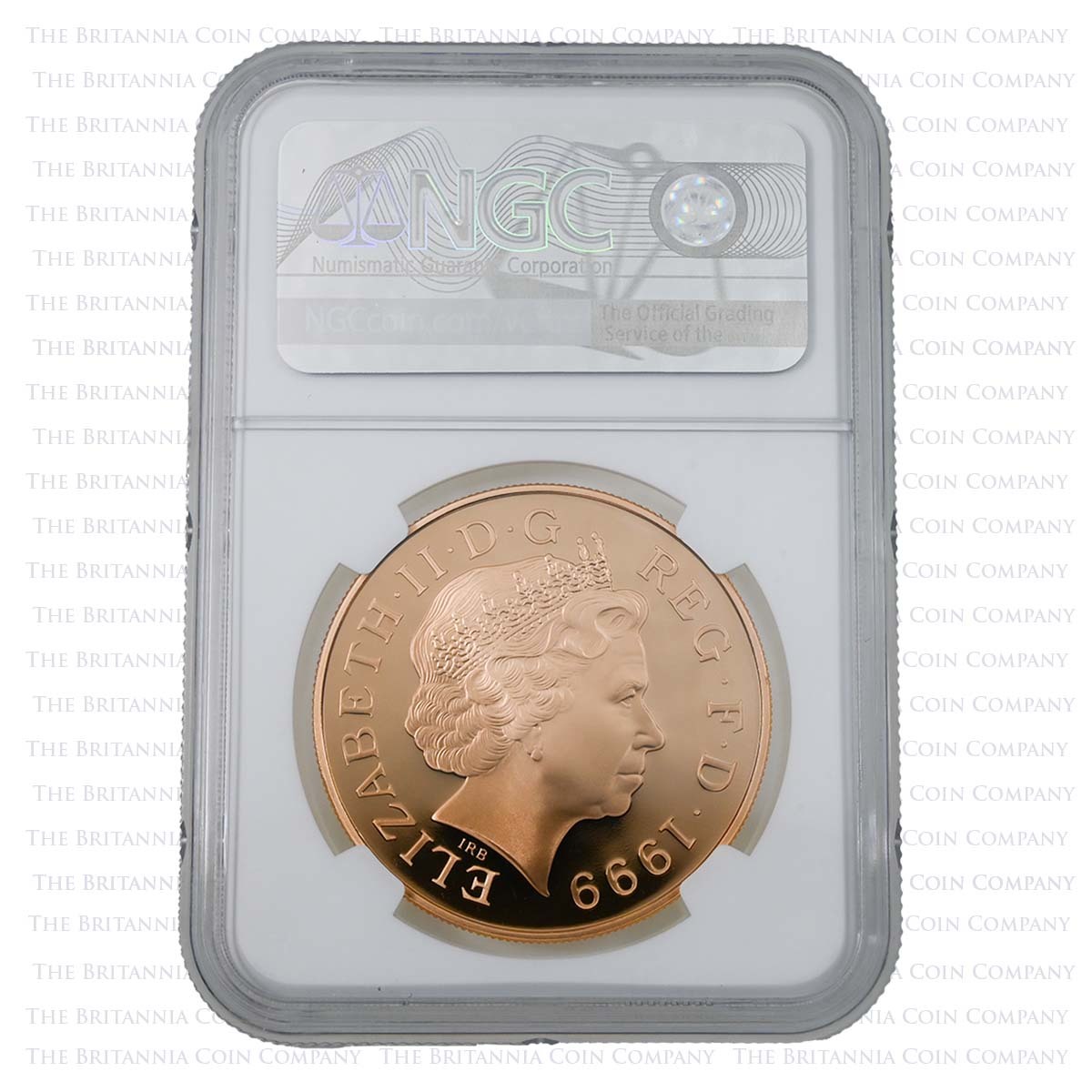 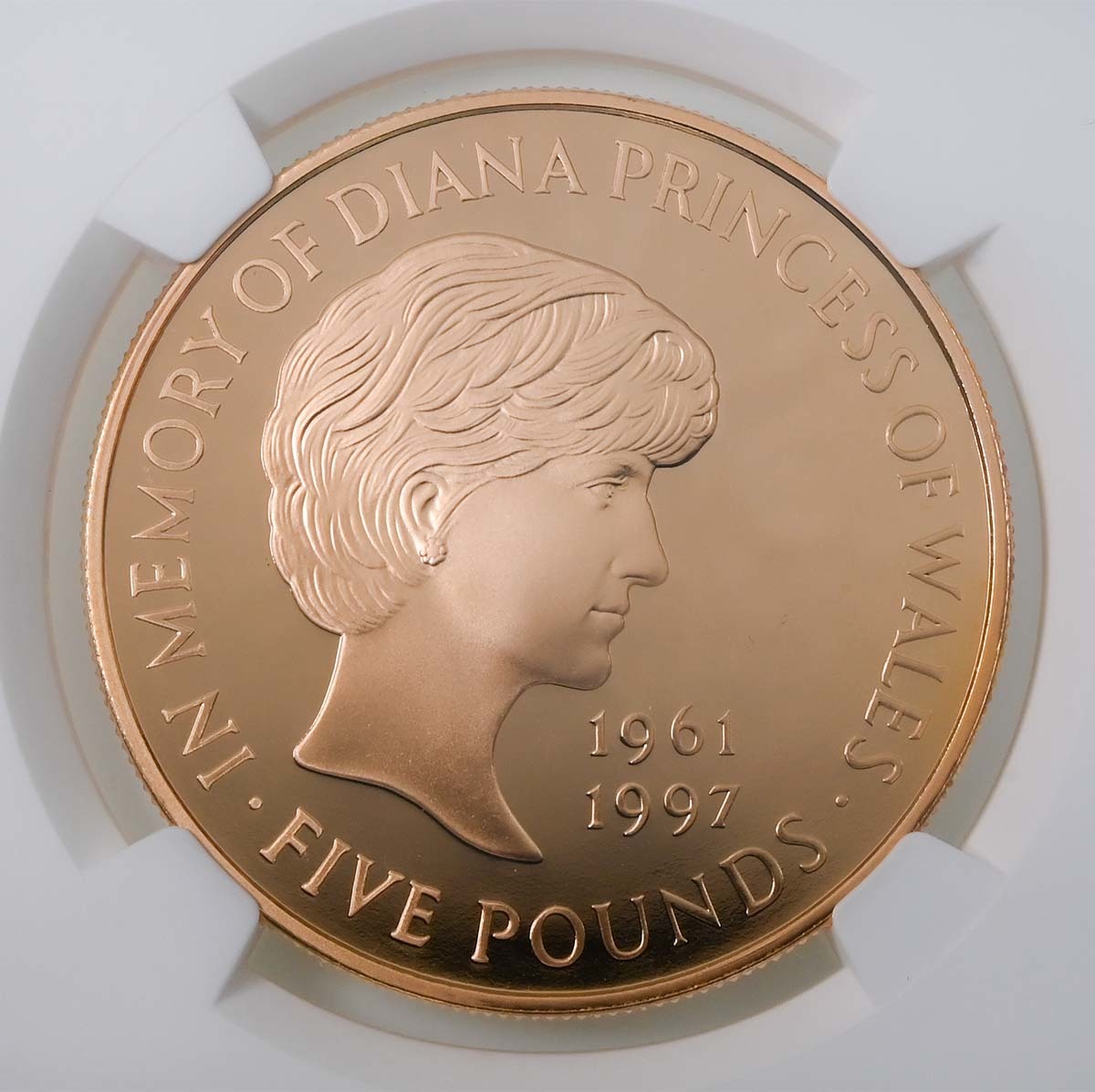 from
£1.00
(VAT Exempt)
An elegant tribute to the People’s Princess in gold proof. This Five Pound coin was issued in the aftermath of Lady Diana Spencer’s tragic death in 1997. She joined the British royal family when she married Prince Charles in 1981 and became known for her charisma, activism and glamorous lifestyle. Her untimely passing caused an unprecedented outpouring of public grief in the UK and around the world. This commemorative gold coin features a beautiful portrait of the Princess of Wales by David Cornell. The dates ’1961’ and ‘1997’ appear below her chin. This is paired with Ian Rank-Broadley’s portrait of Her Majesty the Queen, introduced to British coinage the previous year as the fourth such official coinage effigy. One of just 7,500 struck, this proof coin is composed of 39.94 grams of 22 carat gold and has been graded by NGC as PF 69 Ultra Cameo indicating an appealing contrast between the mirrored surfaces and frosted devices.
Log in to get notified when this product is back in stock.
Track Product
You are not logged in. Please Login to track this product.
Description Summary Specification Royal Mint About us

In Memory of Princess Diana

Lady Diana Spencer joined the royal family in July 1981 when she married Prince Charles, the oldest son of Queen Elizabeth II. As Princess of Wales she was known for her charity work campaigning on behalf of AIDS patients and for the removal of landmines among other causes.

Her activism and glamorous lifestyle made her an icon but also brought public attention to the marriage breakdown which led to her 1996 divorce. Her tragic death in 1997 prompted extensive public morning.

This Royal Mint Five Pound coin was one of a number of public tributes to the People's Princess.

The reverse of this gold coin features a right facing portrait of the Princess by David Cornell. An English artist and sculptor he also designed the 1998 NHS 50p and the 2010 Restoration of the Monarch £5.

It's an elegant, simple portrait, surrounded by the legend 'IN MEMORY OF DIANA PRINCESS OF WALES' with the denomination below and dates '1961' and '1997' to the right of the bust.

Cornell's portrait is paired with Ian Rank-Broadley's official effigy of Her Majesty the Queen which appears on the obverse.

7,500 of these gold proof Five Pound coins were struck in 1999. Silver proof and cupronickel versions were also made available but the gold is the scarcest of this issue.

Composed of 22 carat gold, these commemorative Crowns contains 1.177 troy ounces of gold and have a diameter of 38.61 millimetres.