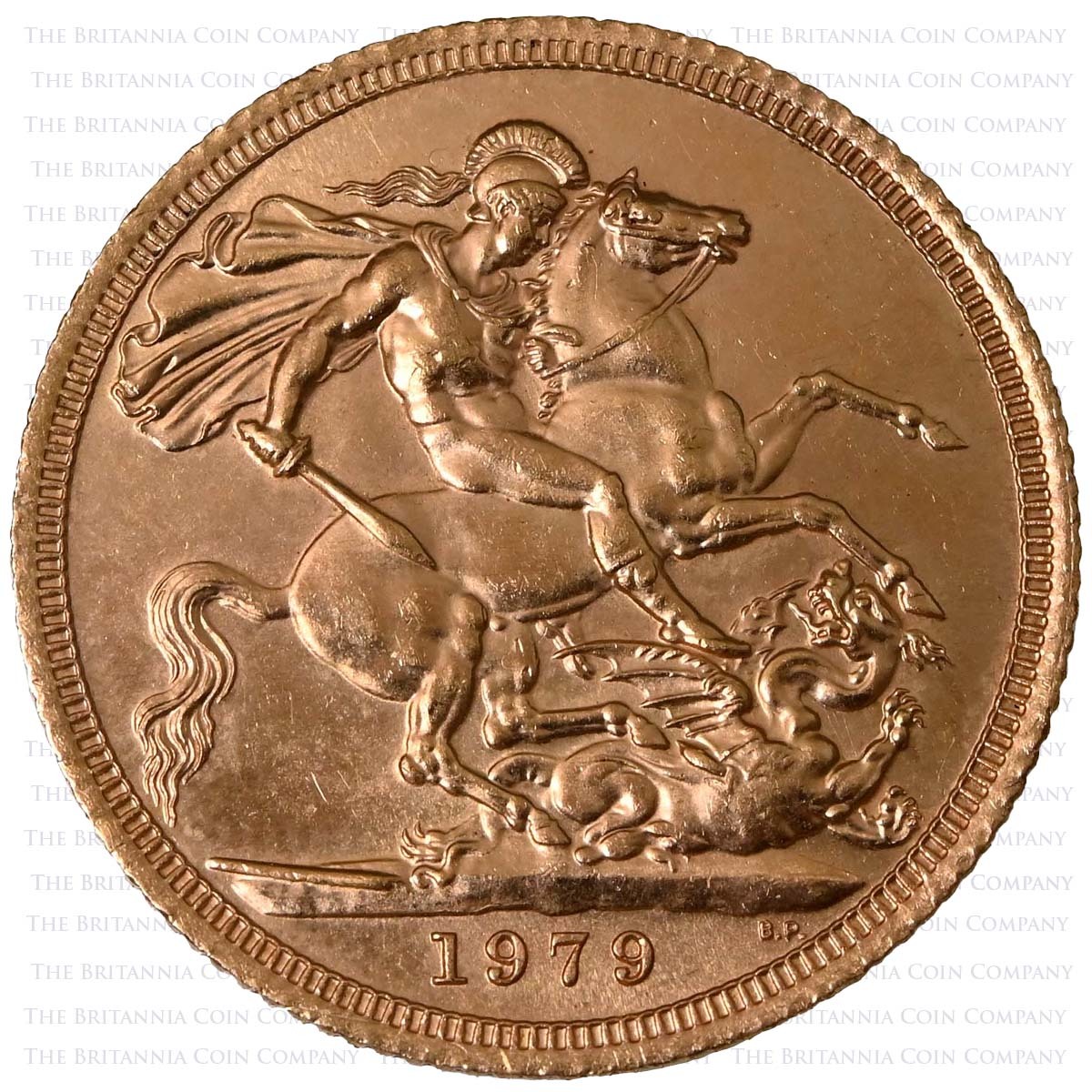 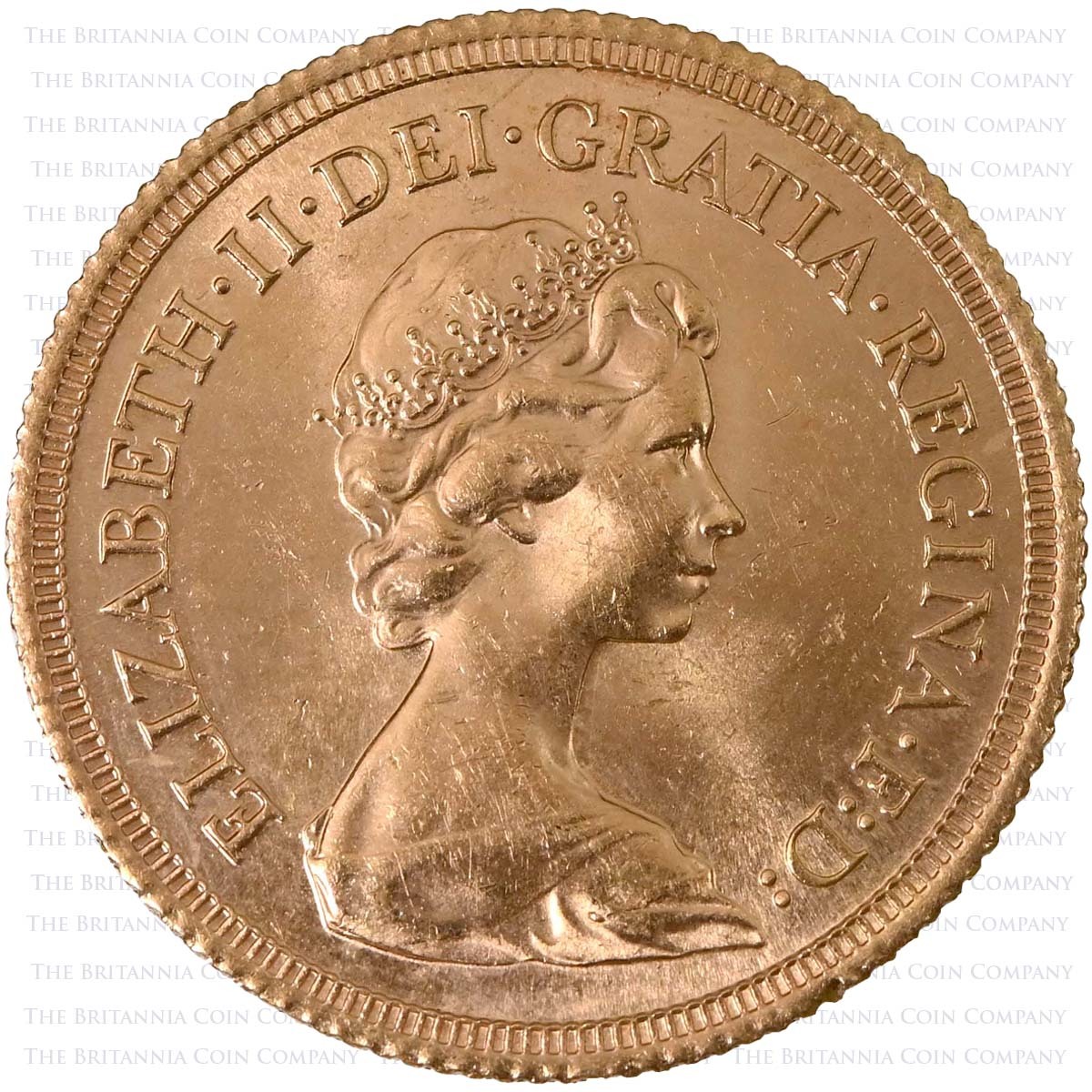 £389.36
(VAT Exempt)
This gold bullion Sovereign was released in the year 1979. The end of a remarkable decade for the UK and beyond. A high grade Bullion coin, chosen by our Britannia team and graded at aEF (about Extremely Fine) or above. Extremely Fine or above coins have very little indications of wear. Bullion coins are also sold at a lower price than their Proof versions, making them more affordable. The Reverse includes the signature depiction of 'St George and the dragon' by Benedetto Pistrucci. The coin's Obverse hosts the 2nd Portrait of HM The Queen, Elizabeth II, by Arnold Machin. The Sovereign is exempt from VAT and Capital Gains Tax and our price is inclusive of fully insured UK shipping. Subject to stock availability.
Quantity
Cost Per Unit
Starts From
1+
£389.36
£389.36

The first of the modern Sovereigns hosted a portrait of King George III and the 'St George and the Dragon' design by Benedetto Pistrucci. Pistrucci was an Italian engraver who became Chief Medallist at The Royal Mint. This 1979 Sovereign coin hosts a portrait of the longest reigning British monarch of all time, HM The Queen, Elizabeth II.

The year 1979 was characterised by; a lack of dustbin collections, Sony's launch of the Walkman cassette player, Mother Theresa winning the Nobel Peace Prize, and the elimination of smallpox. The nation tuned into; Are You Being Served?, Charlie's Angels, Dallas, and Last of the Summer Wine. Meanwhile, Margaret Thatcher was elected as the first female Prime Minister, milk prices soared, The Times newspaper was caught up in a dispute, China introduced a one child policy and Michael Jackson had his first plastic surgery shortly after releasing hit album, Off The Wall. Cinema releases included; Alien, Monty Python's Life of Brian, Apocalypse Now, and The Muppet Movie. Tragedy also struck with the IRA assassination of Prince Philip's uncle, Lord Mountbatten. 1979 was a memorable year in history, now immortalised in coinage.

The Obverse (front, heads) presents Queen Elizabeth II's second portrait by Arnold Machin. An updated version of the same portrait has appeared on British stamps since 1967. The 2nd Portrait by Machin replaced the original Elizabeth II portrayal by Mary Gillick, to help new British decimal currency stand out when it was released in 1968. The Gillick image of Her Majesty in a wreath is replaced by a tiara in Machin's effigy, a gift from her grandmother, Queen Mary.

The Reverse (back, tails) of the 1979 gold bullion Sovereign hosts the signature 1817 'St George and the Dragon' design by Benedetto Pistrucci. In the 19th century, Italian engraver Pistrucci was instructed to create designs for George III's silver and gold coins by William Wellesley-Pole, The Master of The Mint.

The 1979 gold bullion Sovereign coin may be supplied in an acrylic capsule.

This gold bullion Sovereign coin is verified at the Trial of the Pyx, a 13th century ritual used to measure a coin's weight and quality. The Trial of the Pyx is one of Britain's oldest traditions, dating back to at least 1282 during the reign of Edward I. The ceremony usually includes;

Coins are taken from every batch of each denomination struck, sealed in bags of 50 and locked away for testing at the Trial. The 'Pyx' is latin referring to the chests used to transport and store the coins. The ritual involves putting the coins in a copper bowl and selecting at random for testing. Each coin is checked to ensure it meets the specifications set out in the relevant section of the Coinage Act or Royal Proclamation.

This 1979 Sovereign coin is struck to Bullion standard and has legal tender status with a nominal value of one pound sterling. The Royal Mint has produced the modern Sovereign coin since its origins in 1817. It was formerly a circulating coin that was accepted in the UK and around the world. Today, it is an easy way to invest in or collect gold Bullion. The coin's Obverse presents the 2nd Portrait of Her Majesty the Queen, Elizabeth II, by Arnold Machin. This effigy appeared on coins from 1968 until its replacement in 1985. Having reigned for nearly 70 years, Elizabeth II has had five Royal Portraits on coins produced since her ad Machin (1968-1984), Raphael Maklouf (1985-1997), Ian-Rank Broadley (1998-2014) and accession to the throne in 1952. The Portraits were created by; Mary Gillick (1953-1967), Machin, and Jody Clark (2015-). The Maklouf Portrait only appears on Proof Sovereign coins due to the suspension of the Bullion versions between 1983 and 1997.

The 1979 Sovereign coin was created at The Royal Mint. Based at Llantrisant in Wales, The Royal Mint is the official home of British coinage. With over 1,000 years of history dating back to the reign of Alfred the Great and producing currency for 60 countries, it is considered one of the world's leading Mints. Its former home for over 500 years was the Tower of London, before the Mint was relocated to Wales following decimalisation in 1971. A gold Sovereign was the last coin struck in London in November 1975.

Based on the current gold price, we will pay a minimum of £341.13 for a 1979 Sovereign. This is on the basis that it's in reasonably good condition and hasn't been mounted in jewellery.