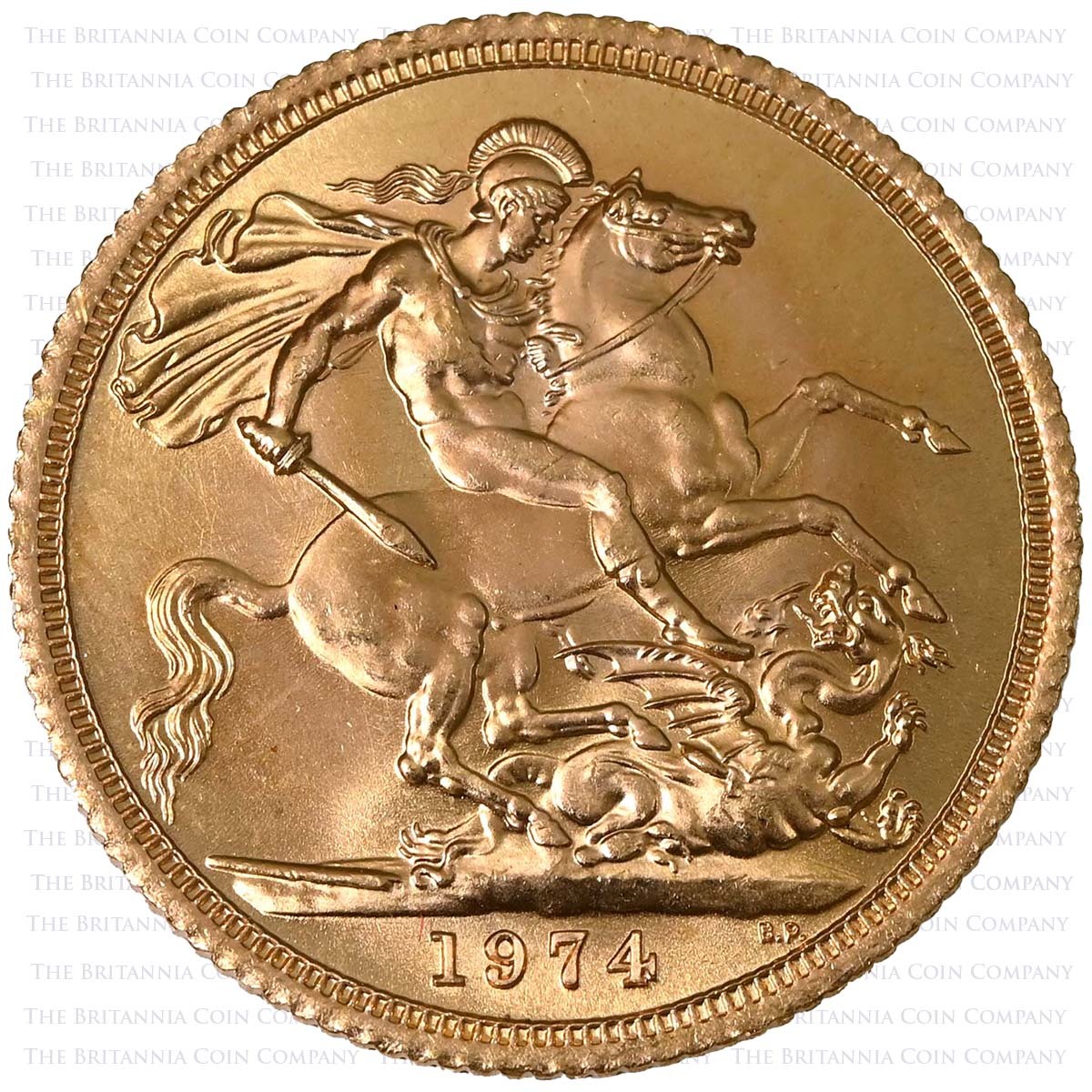 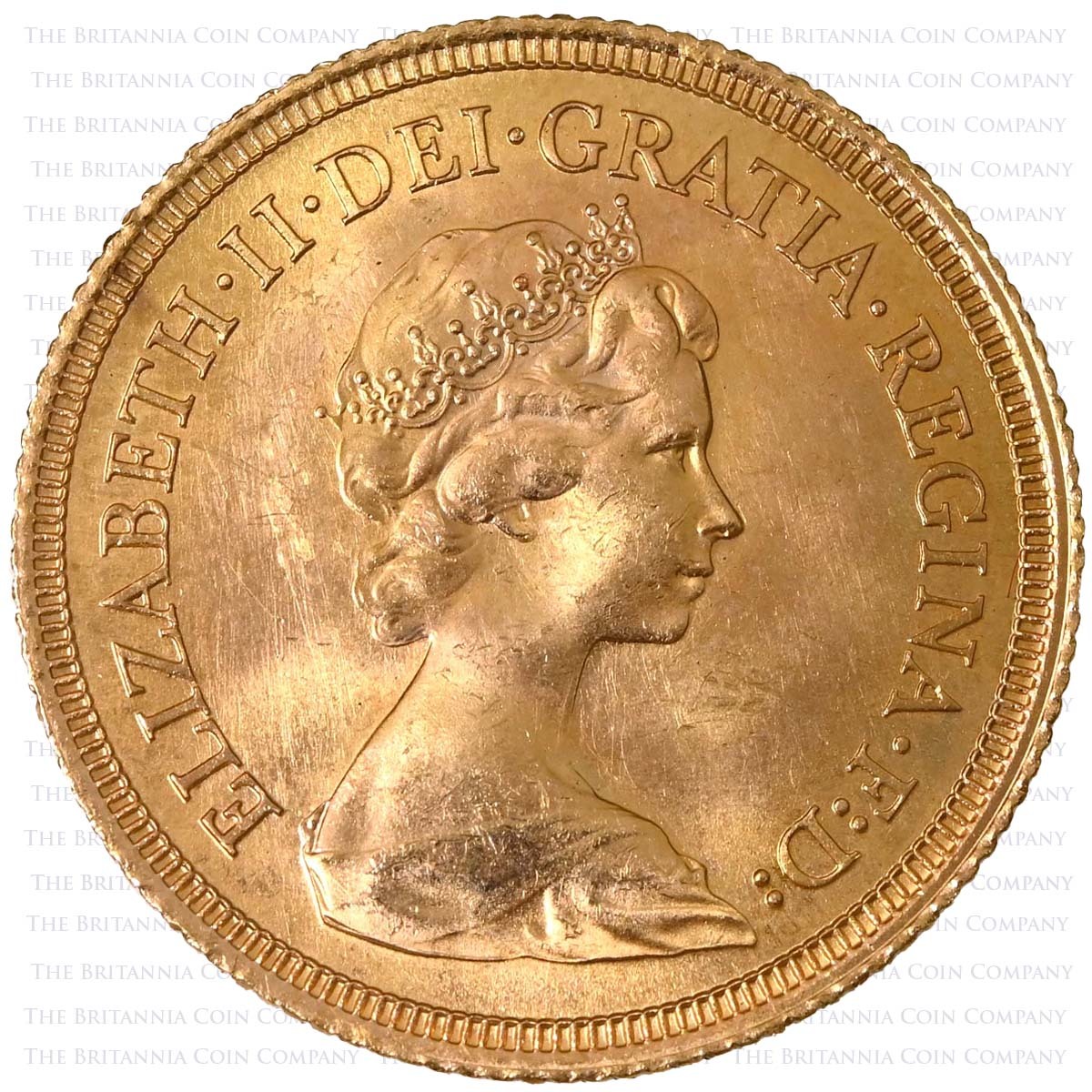 from
£412.08
(VAT Exempt)
This gold bullion Sovereign was released in the year 1974, the first Sovereign produced since decimalisation and The Royal Mint's move to Wales six years before. A high grade Bullion coin, chosen by our Britannia team and graded at aEF (about Extremely Fine) or above. Extremely Fine or above coins have very little indications of wear. Bullion coins are also sold at a lower price than their Proof versions, making them more affordable. The Reverse includes the signature depiction of 'St George and the dragon' by Benedetto Pistrucci. The coin's Obverse hosts the 2nd Portrait of HM The Queen, Elizabeth II, by Arnold Machin for the first time. The Sovereign is exempt from VAT and Capital Gains Tax and our price is inclusive of fully insured UK shipping. Subject to stock availability.
Quantity
Cost Per Unit
Starts From
1+
£412.08
£412.08

The first of the modern Sovereigns hosted a portrait of King George III and the 'St George and the Dragon' design by Benedetto Pistrucci. Pistrucci was an Italian engraver who became Chief Medallist at The Royal Mint. This 1974 Sovereign coin hosts a portrait of the longest reigning monarch of all time, HM The Queen, Elizabeth II.

The year 1974 was marked by; the resignation of President Nixon over the Watergate scandal, a declared state of emergency in Northern Ireland, the Three-Day Week in the UK to conserve electricity, two British general elections ending the Miners' Strike, anti-fascist demonstrations in London's Red Lion Square, ABBA winning the Eurovision Song Contest with 'Waterloo', the discovery of the Terracotta Army in China and the mysterious disappearance of Lord Lucan. Meanwhile; the last native Manx speaker died, the BBC launched Ceefax, Germany sold the first Volkswagen Golf and the first McDonalds opened in London. In the royal family, Ian Ball failed to kidnap Princess Anne and Captain Mark Philips in The Mall. 1974 was a remarkable year in history, now immortalised in coinage.

The Obverse (front, heads) presents Queen Elizabeth II's second portrait by Arnold Machin for the first time. This new Portrait sees The Queen wearing a tiara instead of a wreath, a gift from her grandmother, Queen Mary. An updated version of the same portrait has appeared on British stamps since 1967. The 2nd Portrait by Machin replaced the original Elizabeth II portrayal by Mary Gillick, to help new British decimal currency stand out when it was first released in 1968.

The Reverse (back, tails) of the 1974 gold bullion Sovereign hosts the signature 1817 'St George and the Dragon' design by Benedetto Pistrucci. In the 19th century, talented Italian engraver Pistrucci was instructed to create designs for George III's silver and gold coins by William Wellesley-Pole, The Master of The Mint and the Waterloo Medal for the British Government, a commission lasting 30 years.

No Proof version of the 1974 gold Sovereign was issued. This 1974 bullion coin may be supplied in an acrylic capsule.

The Reverse of this 1974 Sovereign depicts 'St George and his dragon', in the classic design by Benedetto Pistrucci. The Obverse design of Her Majesty, Queen Elizabeth II is the new second portrait design, by Arnold Machin.

This 1974 Sovereign coin is struck to Bullion standard and has legal tender status with a nominal value of one pound sterling. The Royal Mint has produced the modern Sovereign coin since its origins in 1817. It was formerly a circulating coin that was accepted in the UK and around the world. Today, it is an easy way to invest in or collect gold Bullion. The coin's Obverse presents the 2nd Portrait of Her Majesty the Queen, Elizabeth II, by Arnold Machin. Having reigned for nearly 70 years, Elizabeth II has had five Royal Portraits on coins produced since her accession to the throne in 1952; Mary Gillick (1953-1967), Arnold Machin (1968-1984), Raphael Maklouf (1985-1997), Ian-Rank Broadley (1998-2014) and Jody Clark (2015-).

The 1974 Sovereign coin was created at The Royal Mint, the official home of British coinage. With over 1,000 years of history dating back to the reign of King Alfred the Great and producing currency for many countries, it is considered one of the world's leading Mints. Its former home for over 500 years was the Tower of London, before the Mint was relocated to Wales following decimalisation. The 1974 gold bullion Sovereign coin is the first Sovereign minted at The Royal Mint since decimalisation and the relocation to Llantrisant, Wales. A gold Sovereign was also the last coin struck in London in November 1975.

St George is rumoured to have slain the dragon just 20 miles west of our premises in Royal Wootton Bassett. The Britannia Coin Company of Royal Wootton Bassett was established to offer market leading prices to collectors and investors. The Britannia Coin Company handles an array of rare, commemorative and investment coins like this 1974 gold bullion Sovereign. The range includes gold, silver and other precious metal modern coins to ancient, hammered and world issues from across the globe.

The Sovereigns I purchased was as exactly described
Susan Thomas
22nd July 2022
You may also like...
Here are some related products

Based on the current gold price, we will pay a minimum of £361.03 for a 1974 Sovereign. This is on the basis that it's in reasonably good condition and hasn't been mounted in jewellery.