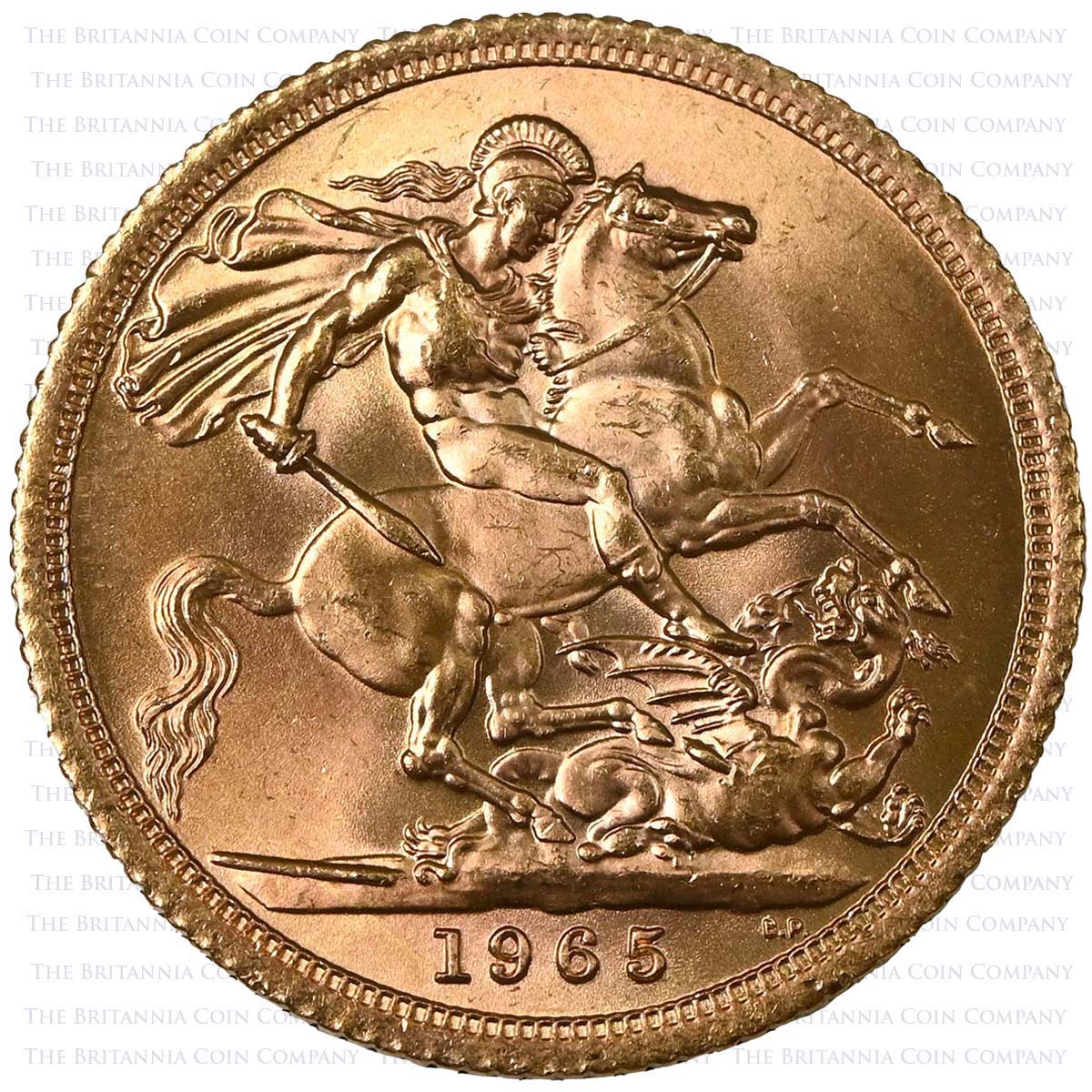 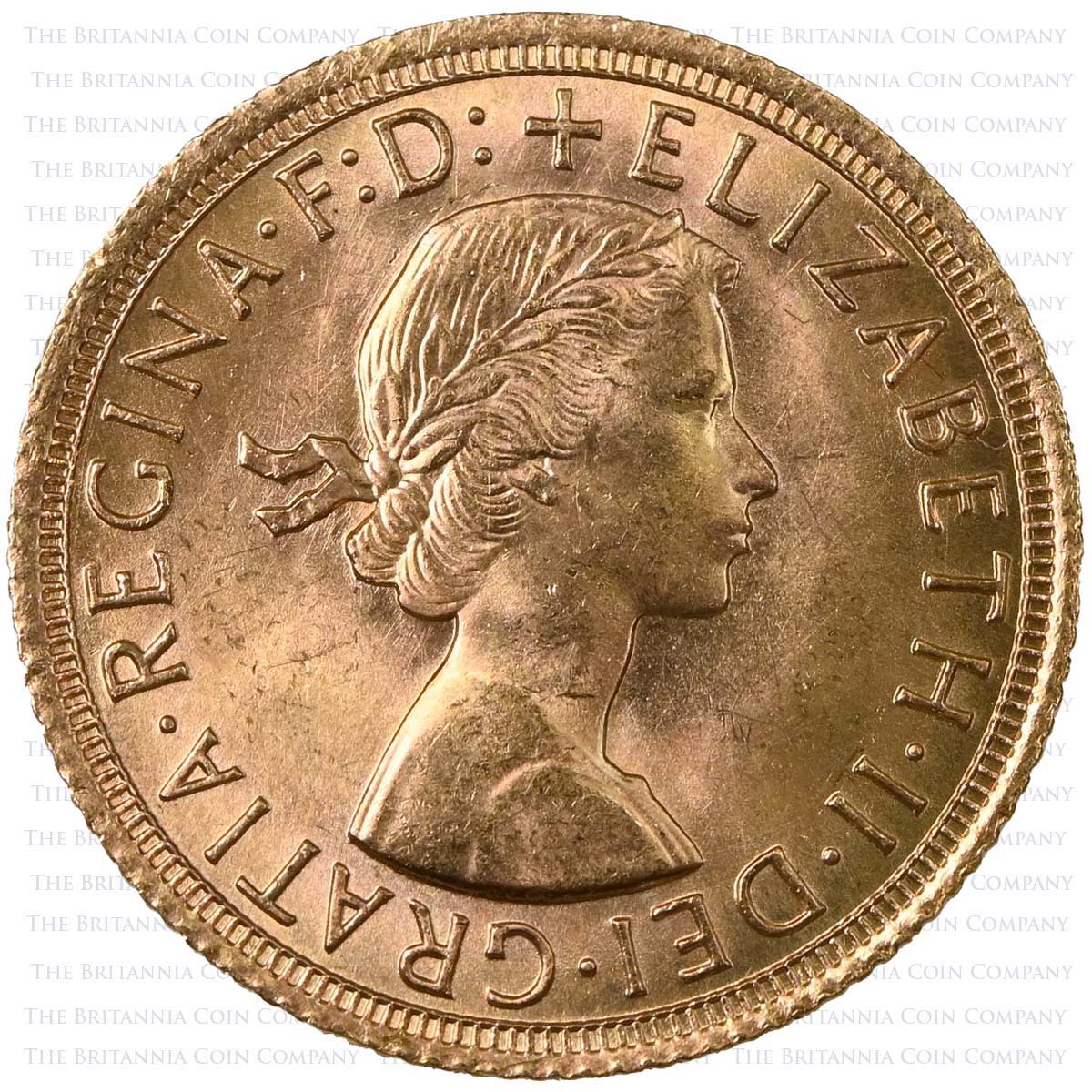 from
£412.76
(VAT Exempt)
This high grade gold bullion Sovereign was released in the year 1965. Carefully selected by us and graded at aEF (about Extremely Fine) or above. Extremely Fine or above coins have very little indications of wear. Bullion coins are also sold at a lower price than their Proof versions, making them more affordable. Ideal for marking a special occasion. The Reverse includes the signature depiction of 'St George and the dragon' by Benedetto Pistrucci. The coin's Obverse hosts the 1st Portrait of HM The Queen, Elizabeth II, by Mary Gillick. The Sovereign is exempt from VAT and Capital Gains Tax and our price is inclusive of fully insured UK shipping. Subject to stock availability.
Quantity
Cost Per Unit
Starts From
1+
£412.76
£412.76

The first of the modern Sovereigns hosted a portrait of King George III and the 'St George and the Dragon' design by Benedetto Pistrucci. Pistrucci was an Italian engraver who became Chief Medallist at The Royal Mint. This 1965 Sovereign coin hosts a portrait of the longest reigning British monarch of all time, HM The Queen, Elizabeth II.

The year 1965 witnessed; the passing of Sir Winston Churchill and his state funeral at St Paul's Cathedral, Lyndon B. Johnson sworn in as the 36th US President, Indonesia withdraw from the United Nations, the assassination of civil rights activist Malcolm X, the opening of Britain's tallest building at the time - Post Office Tower (now The BT Tower), the first global TV broadcast, Sony produce the first VHS recorder, Batman hit TV screens in the US, Spain launch its Club 18-30 resort at Lloret del Mar, The Queen annul double agent Kim Philby's O.B.E, the UK police begin using 'panda' cars, U.F.O. sightings reported across the US, and John Lennon claims The Beatles are 'more popular than Jesus' leading to burning records protests and death threats. 1965 was a significant year in history, now immortalised in coinage.

The Reverse (back, tails) of the 1965 gold bullion Sovereign hosts the signature 1817 'St George and the Dragon' design by Benedetto Pistrucci. In the 19th century, talented Italian engraver Pistrucci was instructed to develop designs for George III's silver and gold coins by William Wellesley-Pole, The Master of The Mint and the Waterloo Medal for the British Government, a commission which took the artist 30 years to create.

No Proof version of the 1965 gold Sovereign was issued. This 1965 bullion coin may be supplied in an acrylic capsule.

The Reverse of this 1965 Sovereign depicts 'St George and his dragon', in the classic design by Benedetto Pistrucci. The Obverse design of Her Majesty, Queen Elizabeth II is the first portrait design, by Mary Gillick.

This 1965 Sovereign coin is struck to Bullion standard and has legal tender status with a nominal value of one pound sterling. The Royal Mint has produced the modern Sovereign coin since its origins in 1817. It was formerly a circulating coin that was accepted in the UK and around the world. Today, it is an easy way to invest in or collect gold Bullion. Having reigned for nearly 70 years, Elizabeth II has had five Royal Portraits on coins produced since her accession to the throne in 1952; Mary Gillick (1953-1967), Arnold Machin (1968-1984), Raphael Maklouf (1985-1997), Ian-Rank Broadley (1998-2014) and Jody Clark (2015-).

In the face of the First World War, many British people started converting their notes into gold, damaging the Bank of England’s reserves. In response, the UK Government circulated one-pound and ten-shilling banknotes instead of the Sovereign and Half Sovereign and gold was prevented from being sent overseas or being melted down. In 1965, J.J. Cullimore Allen, published his book on Sovereigns, recounting his first payroll in banknotes, with many workers requesting to be paid in gold. Allen converted five Sovereigns from his own pocket into notes, and the workers made no further objection. Although not illegal, the practice of converting notes to gold was discouraged and considered both unpatriotic and harmful to the war effort.

St George is rumoured to have slain the dragon just 20 miles west of our premises in Royal Wootton Bassett. The Britannia Coin Company of Royal Wootton Bassett was established to offer market leading prices to collectors and investors. The Britannia Coin Company handles an array of rare, commemorative and investment coins like this 1965 gold bullion Sovereign. The range includes gold, silver and other precious metal modern coins to ancient, hammered and world issues from across the globe.

Based on the current gold price, we will pay a minimum of £368.93 for a 1965 Sovereign. This is on the basis that it's in reasonably good condition and hasn't been mounted in jewellery.