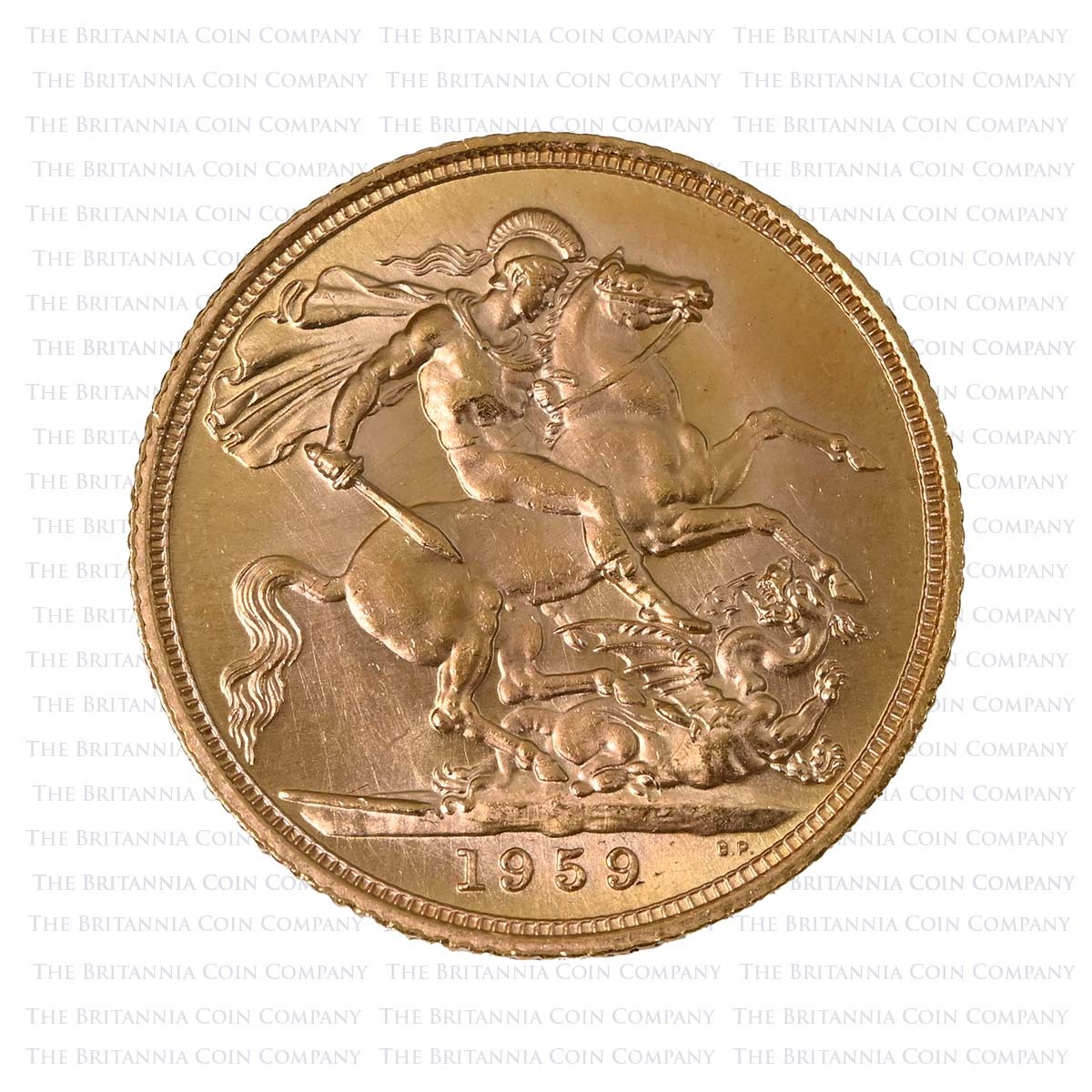 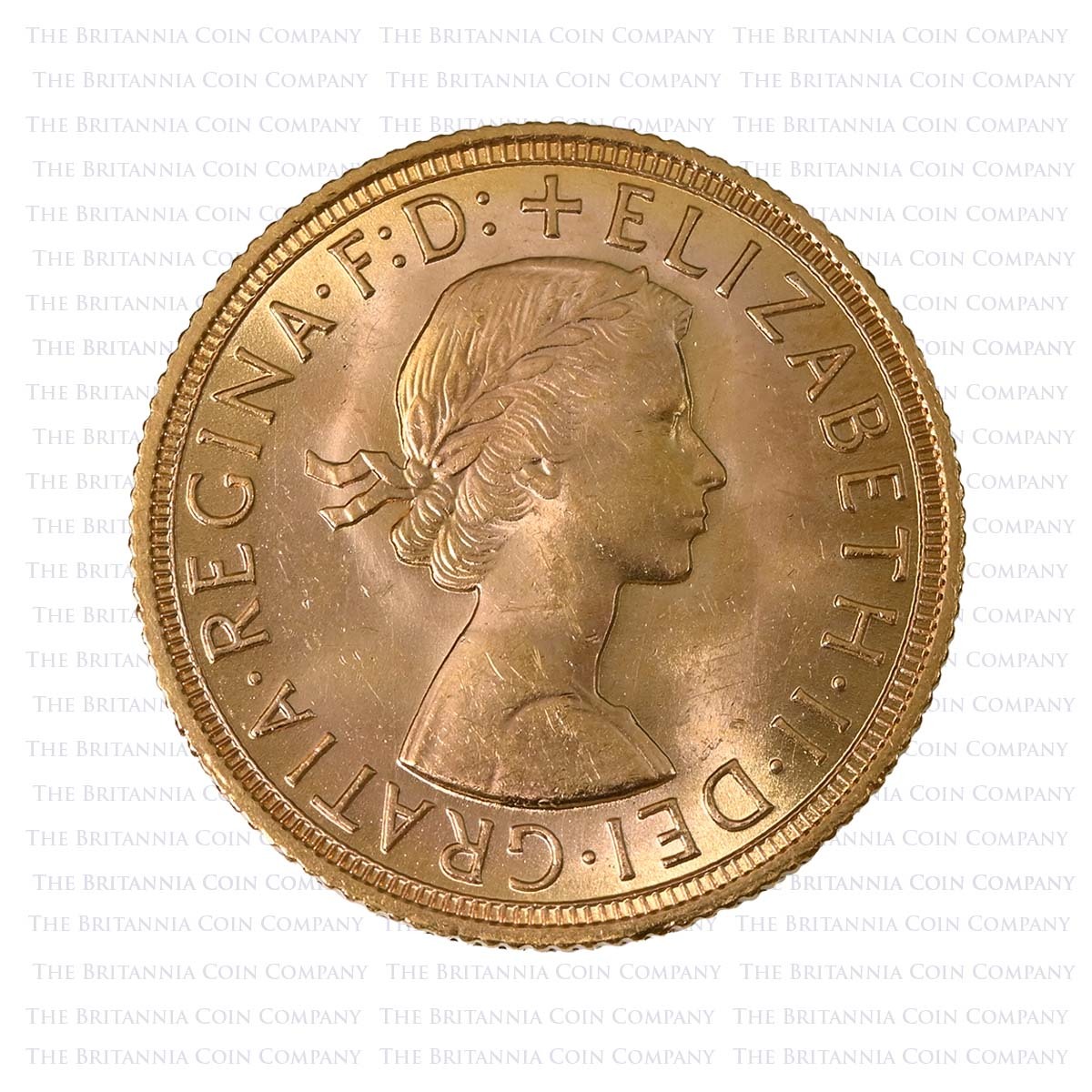 £368.89
(VAT Exempt)
Released in 1959, this gold bullion Sovereign is the last Sovereign issue of the 1950s, as it would not appear again until 1962. Personally selected by our team and graded at aEF (about Extremely Fine) or above. Coins graded at Extremely Fine or above have few signs of wear. Bullion coins are also less costly than their Proof counterparts, making them more cost-effective. Ideal for marking a special occasion such as a wedding, birthday or anniversary. The Reverse hosts the classic 'St George and the dragon' design by Benedetto Pistrucci. The Obverse presents the 1st Portrait of HM The Queen, Elizabeth II, by Mary Gillick. The Sovereign is exempt from VAT and Capital Gains Tax and our price is inclusive of fully insured UK shipping. Subject to stock availability.
Quantity
Cost Per Unit
Starts From
1+
£368.89
£368.89
Track Product
You are not logged in. Please Login to track this product.
Description Summary Investment Info Specification About Sovereigns Royal Mint About us

The Gold Sovereign has a five-century long association with national pride, prestige and exceptional minting quality. The first of the modern Sovereign coins carried the head of King George III and the 'St George and the Dragon' design by Benedetto Pistrucci, an Italian engraver who became Chief Medallist at The Royal Mint. Very similar to the Reverse of the 1959 Gold Sovereign Bullion coin. The 1959 Gold Sovereign Bullion coin hosts a portrait of Elizabeth II by Mary Gillick. HM Queen Elizabeth II is the current and longest reigning British monarch of all time. Born on 21st April 1926 to King George VI and Elizabeth Bowes-Lyon, Princess Elizabeth became Queen in 1952 and her Coronation was held on 2nd June 1953.

The last year of the 1950s shook the world with change; the birth of the microchip which has enabled many scientific and technological breakthroughs, the opening of the architecturally-stunning Guggenheim Museum in New York, Penguin Book was permitted to start selling 'Lady Chatterley's Lover' for the first time changing censorship protocols, Great Britain was once again plagued by 'smog' despite the Clean Air Act 1956, CND (Campaign for Nuclear Disarmament) protests takeover Trafalgar Square in London, the start of the 'Cod Wars' over Icelandic fishing, the first hovercraft is launched, UK postcodes are first used, London Transport introduces the Routemaster double-decker bus, and 30% of households now own a car. 1959 was a remarkable year in history, now immortalised in coinage.

The Obverse (front, heads) presents Queen Elizabeth II's first portrait by Mary Gillick. The first Portrait of Elizabeth II was issued on British coinage in 1953, the year of Her Majesty's Coronation. The image hosts a youthful and uncrowned Queen. Gillick's design stood out for its 'approachable' depiction of Elizabeth II. As a tribute to Mary Gillick, the design is still struck on Maundy Money today at The Queen's request.

The Reverse (back, tails) of the 1959 gold bullion Sovereign hosts the signature 1817 'St George and the Dragon' design by Benedetto Pistrucci. 19th century talented Italian engraver Pistrucci was instructed to develop designs for George III's silver and gold coins by The Master of The Mint. Pistrucci also designed the Waterloo Medal for the British Government, a commission which took the artist 30 years to create.

A small number of Proof versions of the 1959 gold Sovereign were issued but these are exceptionally rare. This 1959 bullion coin may be supplied in an acrylic capsule.

This 1959 Sovereign coin is struck to Bullion standard and has legal tender status with a nominal value of one pound sterling. The Royal Mint has produced the modern Sovereign coin since its origins in 1817. It was formerly a circulating coin that was accepted in the UK and around the world. Today, it is an easy way to invest in or collect gold Bullion. As the longest reigning British monarch, Elizabeth II has had five Royal Portraits on coins produced since her accession to the throne in 1952; Mary Gillick (1953-1967), Arnold Machin (1968-1984), Raphael Maklouf (1985-1997), Ian-Rank Broadley (1998-2014) and Jody Clark (2015-).

The 1959 Sovereign was produced at The Royal Mint, which is the designated place for the UK to mint official coinage. Its history dates back well over 1,000 years and today, The Royal Mint produces currency for many countries across the globe. The Royal Mint first moved to the Tower of London in 1279 and remained there for over 500 years. When decimalisation was introduced in 1971, all The Royal Mint's coin production was relocated to Llantrisant, Wales. A Gold Sovereign was the last coin struck in London in November 1975.

The lower mintage for this 1958 Sovereign was due to the UK and the US competing over price fixing with gold priced that year at $35 per ounce.