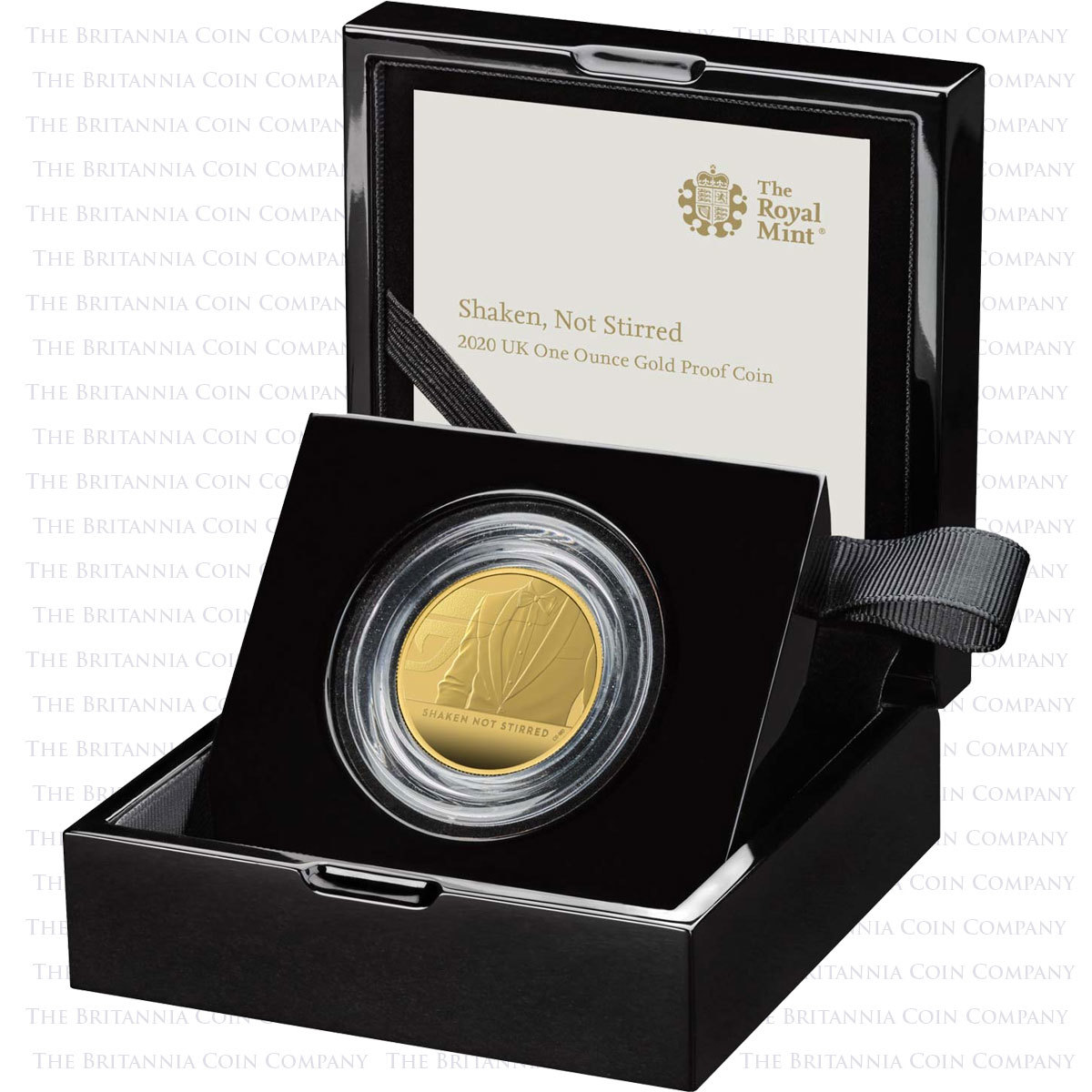 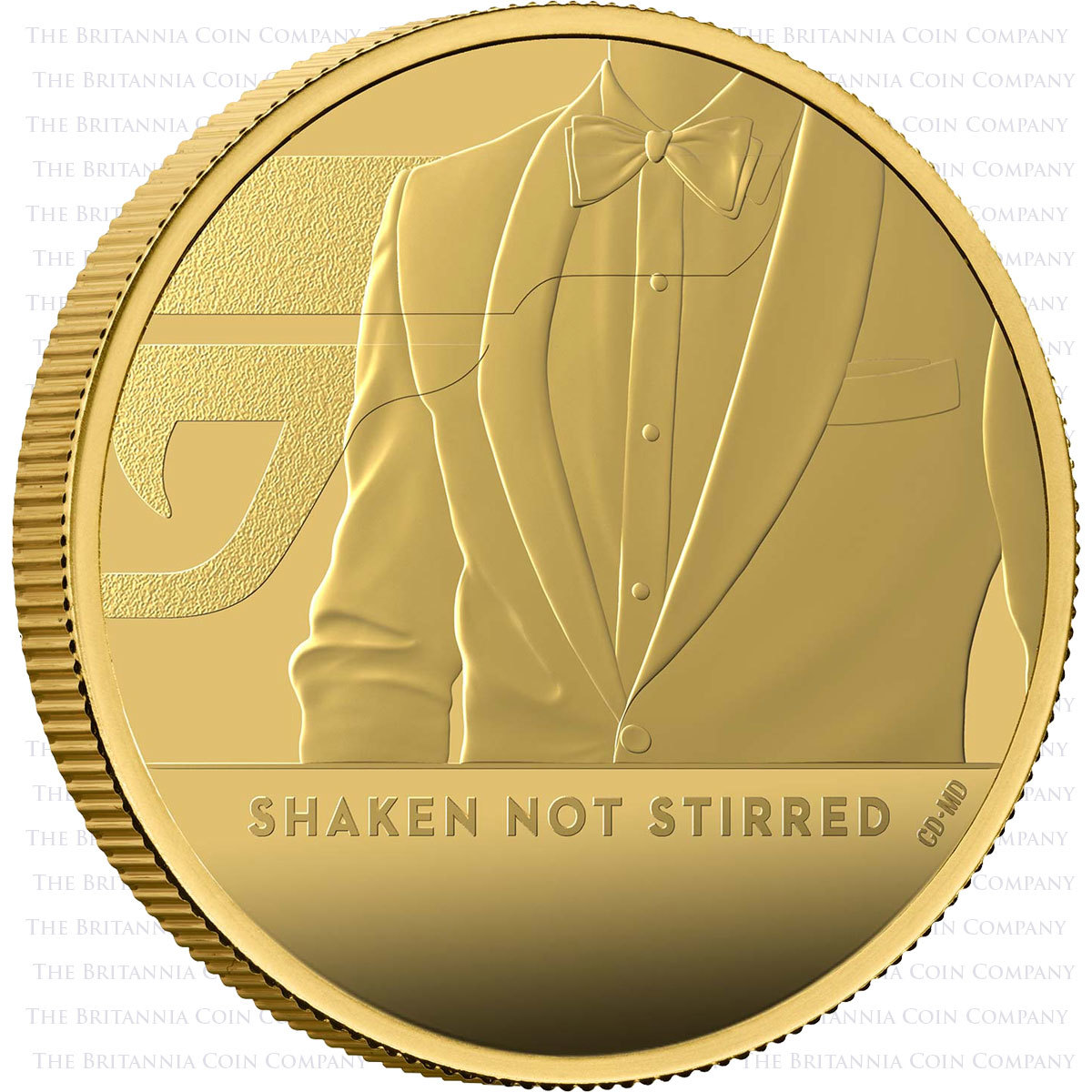 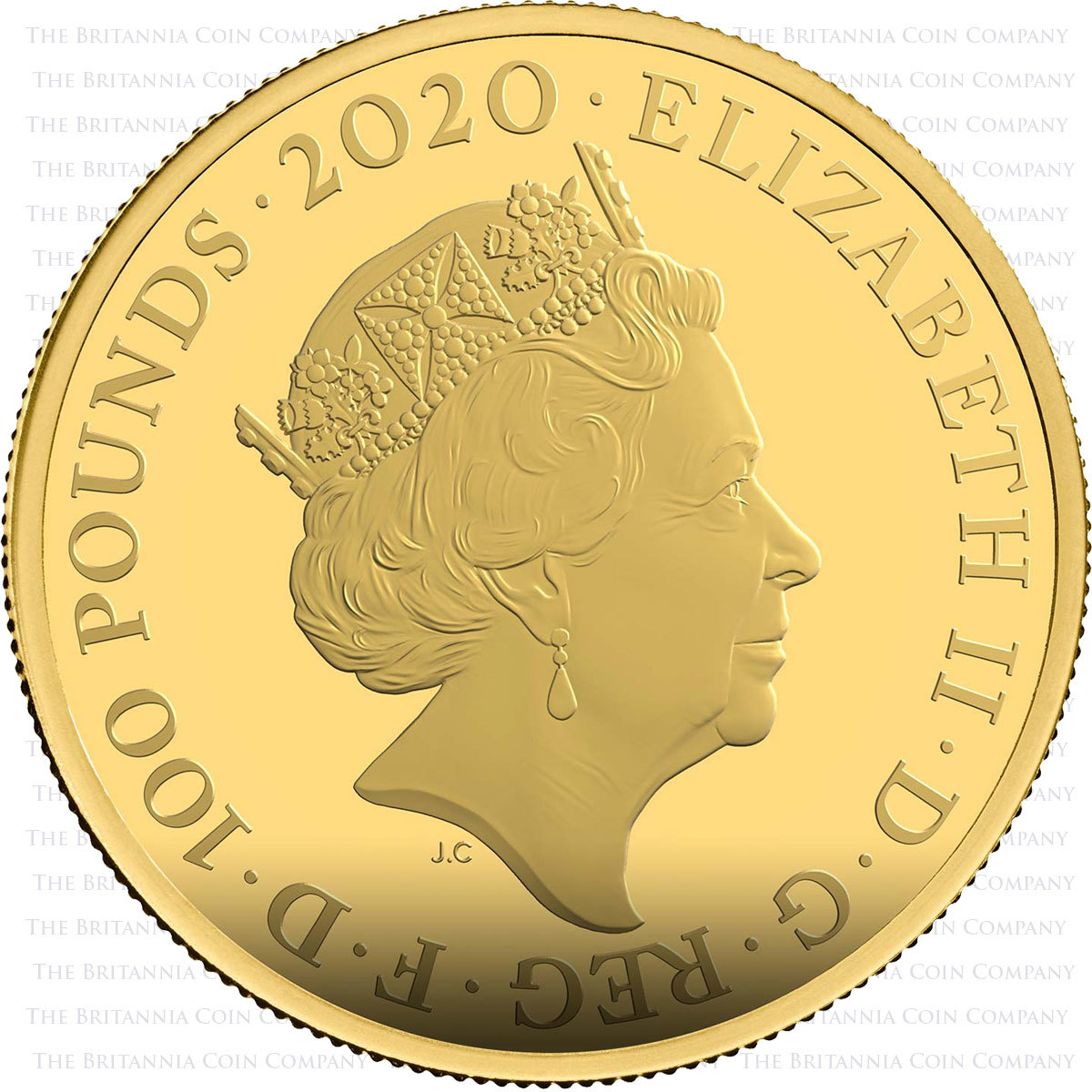 Featuring Bond's hallmark tuxedo in a design by creative duo Matt Dent and Christian Davies, this £100 coin is one of a three-coin 007 series. The coin series celebrates the emblems of the longest running film series of all time. The coin's obverse hosts the 5th Portrait of Her Majesty the Queen, Elizabeth II, by Jody Clark. Unique to the Bond series, the trio of coins include a micro-text engraving of the first 25 films within the 007 motif. Boxed in behind-the-scenes photos from the films, you will also have the chance to use your espionage skills to uncover a secret message hidden within the coin!

The Gold Proof one-hundred pound coin is the third in a three-part collectible series from The Royal Mint. The series coincides with the release of the 25th Bond film, 'No Time To Die', which was due to premiere in 2020. Created by graphic designers Matt Dent and Christian Davies, the 'Shaken Not Stirred' coin showcases the trademark tuxedo donned by Bond on the reverse. A secret message is hidden within the coin, and joined together, the trio of coins forms the 007 motif. The coin's obverse presents the 5th portrait of HM Queen Elizabeth II by Jody Clark. With a mintage of just 350 individually boxed coins, this release celebrating the 'Tools of Espionage' is highly sought-after.

The adventures of fictional British Secret Service agent, James Bond, were loosely based on author Ian Fleming's own extraordinary life. Events include; his work in the naval intelligence service, colluding on Operation Goldeneye, having multiple female romances, driving flash cars, and his rumoured feud with architect Ernő Goldfinger. His Bond novels have since been adapted for television, radio, comic strip, and video games. Most notably, the books transferred to the big screen, becoming the longest running film series ever. Charmingly referred to as 007, agent James Bond's 'license to kill' lifestyle encompasses; luxury cars, guns, avant-garde gadgets and technology, and multiple lovers. Nearly 60 years on, James Bond's character shown in action-packed and musically sensational films continues to enchant fans of all ages.

The three-part coin series from The Royal Mint will pay homage to classic elements of the iconic British films - the Aston Martin DB5, the gun barrel, and James Bond himself in his trademark tuxedo. The Royal Mint collaborated with EON Productions, the makers of the long-running movie series, throughout the creation process. The Mint has ensured the coins strike a tingle of the ecstasy you receive from watching a Bond movie.The design of the coins will certainly give numismatists everywhere a slice of the Bond action. The coins set collectors the task of unravelling a secret message hidden within the coin. Collectors also enjoy a three-coin set, which when united, unveils the 007 motif, containing the first 25 films in micro-text.

This coin was created at The Royal Mint, which is the official producer for all UK coinage. The Royal Mint was awarded the honour of creating the medals for the London 2012 Olympic and Paralympic Games. The London Games were a celebration of British culture. At the opening ceremony, James Bond, played by Daniel Craig, 'jumped from a helicopter' with Her Majesty The Queen, Elizabeth II.

The Royal Mint was housed within the walls of the Tower of London for over 500 years before relocating to its current home in Llantrisant, Wales. It has a history dating back well over 1,000 years and produces currency for over 60 countries. As one of the world's leading Mints, The Royal Mint has also helped to establish Mints in Sydney, Perth, Melbourne, Pretoria, Mumbai and Ottawa.

The Britannia Coin Company of Royal Wootton Bassett was established to offer market leading prices to collectors and investors. The Britannia Coin Company buys and sells a wide range of rare, interesting and collectable coins. These include newly minted gold, silver and other precious metal coins to milled, hammered, ancient and landmark issues from around the world. Royal Wootton Bassett was awarded Royal status by Her Majesty the Queen, Elizabeth II, in 2011, the first town to be awarded such an honour for over 100 years.