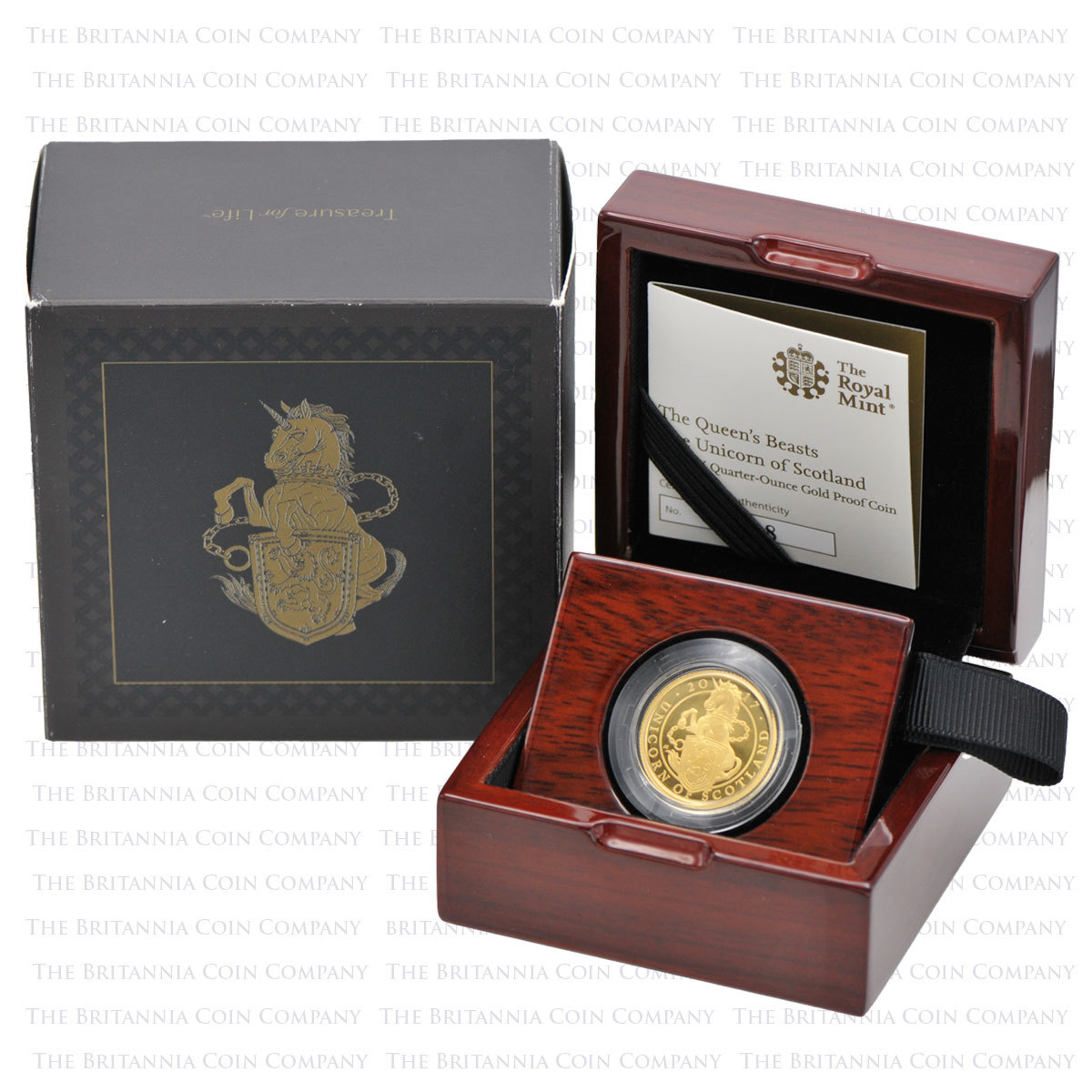 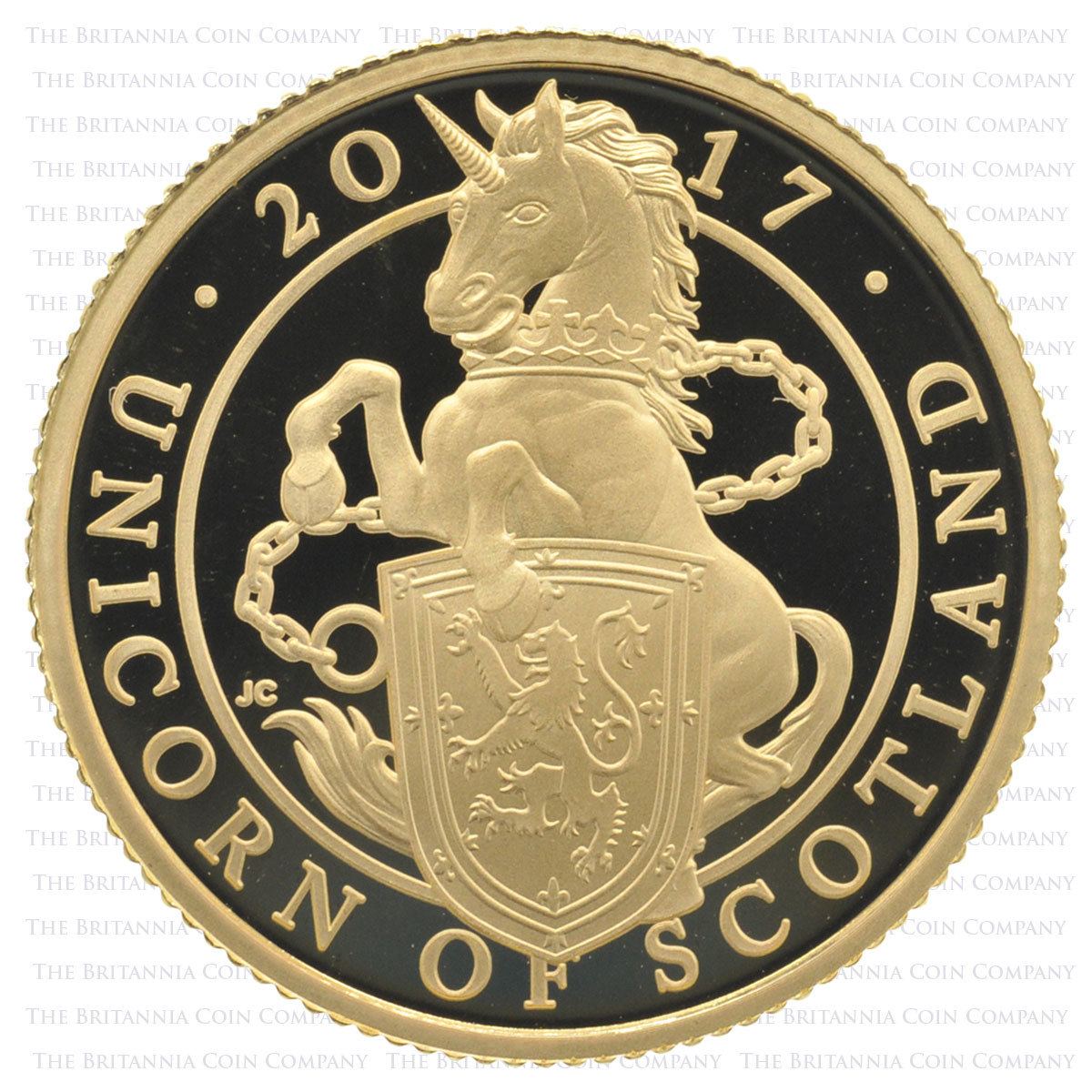 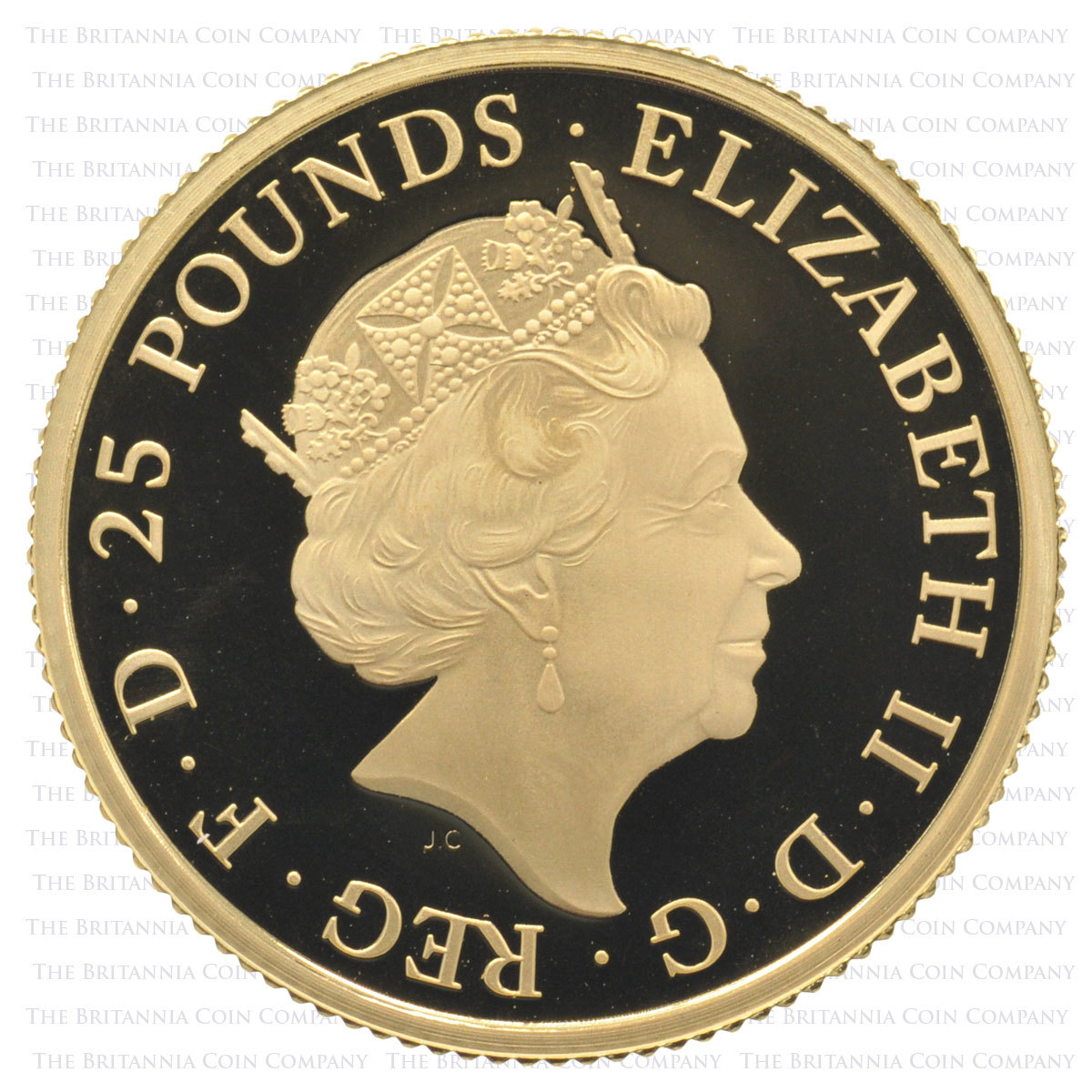 from
£750.00
(VAT Exempt)
Limited presentation mintage of just 1,500 coins. The Unicorn of Scotland £25 Gold Proof coin forms a tenth of The Queen's Beasts series created by The Royal Mint. The collection was designed by Jody Clark, and features the 5th Portrait of Her Majesty the Queen, Elizabeth II, on the coin's obverse with a classic heraldic image on the reverse. The series was released in 2017, commemorating the year Her Majesty became the longest reigning monarch in history. In this edition of the series, the coin captures a depiction of the unicorn wrapped in a golden chain leaping over a shield. The unicorn is Scotland's national animal, signalling purity, innocence, masculinity, and power. These symbols of heraldry, myth and ancient legend date back over 1,000 years to King Edward III's reign, and now immortalised in coinage, the Beasts are a highly collectible tribute to Her Majesty the Queen, Elizabeth II. Now, numismatists can secure this token of royal heritage to treasure for eternity.
Log in to get notified when this product is back in stock.
Track Product
You are not logged in. Please Login to track this product.
Description Summary

This £25 Gold Proof coin from The Royal Mint, honouring The Unicorn of Scotland, is the perfect addition to your coin collection. Both sides of the coin were designed by Jody Clark. The coin's obverse presents the 5th Portrait of Her Majesty the Queen, Elizabeth II, with the reverse depicting the unicorn wrapped in a golden chain, the iconic Scottish Royal Coat of Arms image. The unicorn is accompanied by a royal shield acting as a motif connecting The Queen's Beasts collection, of which this coin is one of 10 in the series. For every coin in the series, Jody Clark took inspiration from heraldry and the true nature of the beast. Each coin in the limited presentation series arrives with a booklet produced in association with Clive Cheesman, Richmond Herald at the College of Arms.

The Unicorn of Scotland has represented purity and power since its origins in the 12th century, when it was first depicted on the Scottish Royal Coat of Arms by William I. The custom of using the unicorn on coinage was first adopted by King James III in the 15th century. The shield was first introduced when Scotland and England were united in 1603. The practice has remained a staple of Scottish culture and has been present on the Scottish Royal Coat of Arms ever since. The Unicorn of Scotland was one of 10 statues sculpted by James Woodford, OBE. The six-foot-tall statues formed a guard of honour, The Queen's Beasts, at the entrance to Westminster Abbey in 1953, on the occasion of the coronation of Her Majesty the Queen, Elizabeth II. The figures were inspired by statues at Hampton Court Palace created over 400 years ago for Henry VIII and known as The King's Beasts. Today, The Queen's Beasts are displayed at the Canadian Museum of History in Quebec. Portland stone replicas, again designed by James Woodford, OBE, watch over Kew Gardens in London.

Gold Proof coins are ideal for a serious collector. Minted at The Royal Mint with intricate designs, they represent the highest quality of commemorative coin and are therefore highly sought after. If you're considering starting a collection, you should know that Proof coins are a worthwhile investment with unrivalled sharpness, detail and finish. Proof coins are made in gold, silver and platinum and hand-finished to remove all imperfections. Gold Proof coins are also created by The Royal Mint to be enjoyed and treasured as a piece of history. Proof coins make the perfect gift to hand down to generations of family. They can also be gifted for a wedding, anniversary, birthday or special occasion.